Samphi has had it's first real review courtesy of Luke over at The Indie Reviewers. Read what he had to say about the game!

Posted by GreenyGamesStudio on May 23rd, 2013

Samphi is a perfect example of what happens when a intrigued developer decides to experiment with their capabilities which results in the creation of a great game. Designed and developed by a single man named Dale Green, Samphi began its life as a side project as Dale began to attempt to create his own block building engine. Boosted by his success he decided to further his exploration by adding shadows to the engine in an aim of testing his skill. 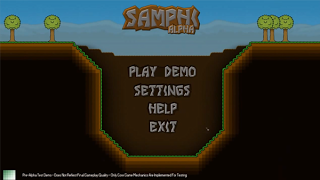 And this as you can see paid off, Dale found himself developing a basic 2d world as he added further features to the game, such as new objects and world generation. Over a number of months he continued to further increase the software's content by adding a player and randomizing world generation resulting in his official decision of forming the past experiments into a game.

Inspired by the open world game play of popular titles such as Terraria and Minecraft, Dale liked the idea of having a world manipulatable by the player, though also desired a game that held an aim for the player to strive for such a survival and upgrades. So to achieve this objective of adding a reason for playing the game; Dale incorporated a tower defense style aspect to the game in which the player can construct their defenses in the open world environment, and then defend their core from attacking hostiles. As the player survives and kills opponents they gain the ability to upgrade to increase their chance of survival. 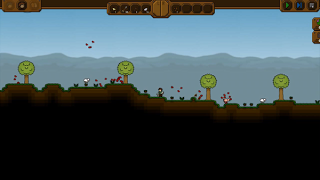 The art style for Samphi is simple yet uniquely alluring, the art began as a basic placeholder for Dale to visualize the games concept and preview his ideas. However over time Dale has improved the quality of the art with a number or re-draws. Currently the art is very ascetically pleasing, with an easy on the eye yet detailed look which immerses the player whilst maintaining a casual feeling to the game. Furthermore the inventory and crafting interface has a smooth,refined look to it which fits perfectly into the game scene without any harsh contrasts.

The movement and control of the player is simple and easy to master with the use of basic (W,A,S,D) keys and the mouse being the most commonly used controls. The aim of the game is initially tough to work out yet this will most likely be made clearer in a later update as the current version is an early demo. The in-game audio is very enjoyable with a calm and relaxing tune for the opening menu and game, mixed well with subtle sound effects such as bird tweets and block breaking. Dales shared his plans for the games audio

"An important aspect of the game to me is its music, I am going to be getting my music from two places; Kevin MacLeod and my brother Darrell. Both people create amazing tracks that I feel will fit perfect with the feel and the atmosphere the game is going to have"

The stages of development had its ups and downs, seeing that the the game has been in a slow stage of development over the past two years and still has a lot of potential. One major problem that Dale encountered was the problem of a major corruption on the game and he had to resolve to a past version of the game; losing over two weeks of hard work. However publicity growth and the general development of the games is great fun as said by Dale:

"Pretty much every day I develop is a good time as I love what I am doing so much!, One of the best moments however was seeing Samphi on the Desura homepage. It was totally unexpected and i got a great boost in views, that was epic and i spent the rest of the day running around with my IPad showing people!"

Samphi currently has a ton of of potential with a huge number of updates planned down the line meaning that the game has a huge amount of re-playability meaning players can expect many hours of un-repetitive game play. Also Dale is intending to implement a multi-player function to the game so players can defend their homes against the hordes together, furthermore Dale is also intending on hitting an alpha funding stage.

As the game is currently in an early alpha funding stage, the games FREE pricing is understandable, however I personally would increase the price to a few pounds soon as the game is quickly becoming playable and enjoyable, and the few low pounds/dollars would help the developer Dale to further the game's features.

Overall I would like to award Samphi with a rating of seven out of ten at its current stage of development as I can see the game becoming a big hit in the indie world and it looks like its going to become a big social game due to its soon to be multi player feature and the potential of implementing new items into the game as fans could possibly contribute with recommendations and requests to the developer to further the game.

Samphi - A game By Greeny Games

Again, many thanks to Luke over at The Indie Reviewers for this and be sure to check out their other indie reviews at Theindiereviewers.netau.net .

No thanks needed, you earned it c:
in the words of some random gun slinger
"you dun good"

Wow man that is so awesome !! just shows you that hard work pays off , only complaint they should of gave it a 10/10 :D

Yeah, It's awesome to get such a good review! Plus the game is just a baby. There's still LOADS to do so we should hopefully end up with a kick *** game thanks to the AWESOME community already building around it :D