The grand plan in the short: Expansions so people can play earlier and "acceptable" levels of graphics before "Completed" levels.


Step 1: The What
Project Earth is, of course, Earth. As in. The Earth. It's huge, right? If I were to continually work on development and finish Earth before releasing it, it could take years for you guys to get in and start playing.

So, I plan to do it piece by piece, or moreso, area by area. For example, I'll make Italy and that'll be version 1. Then you can play, and I'll start working on the next area on a duplicate server and release that, when completed, as an expansion.

With luck, I'll handle enough of a following to earn some decent donations/web-dosh generating so that I can afford a bigger and better home-ran server and so forth with most excellent upgrades to keep the game running

Step 2: The When
Now, this is a difficult question. The graphics, I would widly guess, will take a week or two, maybe up to a month. The mapping thereafter could take twice as long. So, perhaps, 2-4 months, for the game to be even beta playable?

But, I don't want to make any promises and raise any false hopes! Once I get an idea of the release date for sure, I'll make sure you know!

Step 3: Beta Testing
Beta Testing requires, well, Beta Testers. I intend to hire active fan folk of Project earth for closed Beta Testing. The maps won't even be complete, but they'll be able to run around and look for any holes in the world (From actual missing tiles, black spaces, to bump-blocking missing, allowing people to run through walls).

Closed Beta testing will likely to be soon after the graphics are done and I've got enough maps done to keep the select few busy for at least ten minutes, heh.

When I'm mapping, i'm logged into the actual game and the maps are updated with an in-game editor, so the closed beta testers can sit and watch the world unfold as I go.

Step 4: General Audience
As I said with Step 2, it could take up to 4 months - maybe more if anything goes wrong, which it will - before I release the game as "Version 1" which is basically Italy.

Once it's out, I am considering following the same marketting technique as MyWorld. You can download it for free, or buy the same package and get it in the post with full-decent box. I'd like to include a manual with that, but I think it'd cost too much to get that done... We'll see!

Also, it's always been a dream of mine since the very start in January 2009 to release a game walkthrough; one of those big hefty books with awesome background graphics and most excellently detailed... details of the game.

Step 5: The Mapping
Alright so, just how big is Project Earth going to be? Well, let's take a look.

I want cities to be cities, and the capitals to be as accurate as possible. So, if a doorway into a house is 32 pixels wide, it's 32 pixels wide. (The character is approximately 28, or so). A single tile in the game is 32x32 pixels.

Insulae were pretty small; usually one, sometimes two, rooms large - meanwhile, a domus was huge. So, if a single insula is 5x5 tiles, that's 25 tiles (800x800 pixels. An average screen is now 1024x768 pixels). So, you'd be able to fit the insula on your screen (but, limitted by the game screen size).

Then, if an average street were to include 6 insulae on either side, thats 150 tiles for the street length, and maybe 12 tiles wide. 150 tiles wide for one side of insulae, 12, then another 150.

Now of course, streets are windy - not to mention all the alleyways, plazas, large government buildings, entertainment buildings, inns, taverns, domusi... So, a city will be pretty damn big.

A little bit of research and image editting is shown belong. I basically have two maps. One shows the border of Rome in around 200AD (first image). Which is obviously not useful at all.

Then, I *finally* found an image that shows the borders of third century Rome (cyan, second image).

Then below I roughly overlaid these and had the third image, below.

And finally, I overlaid that with a grid. One square is a map (For larger open-air buildings, such as theatres, I may be able to turn a four-grid map into a single map), shown in image four. 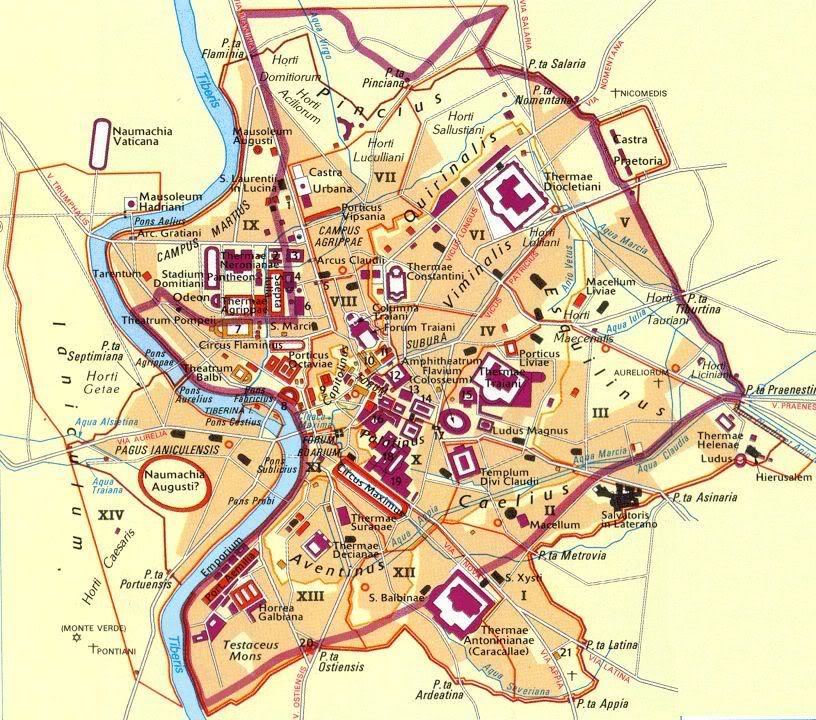 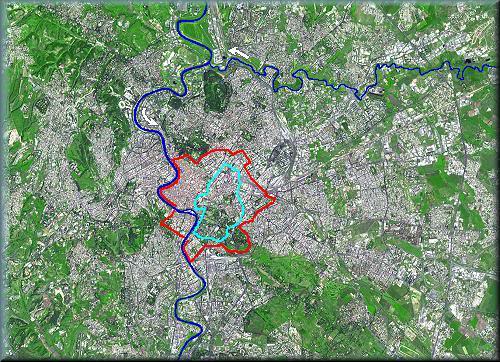 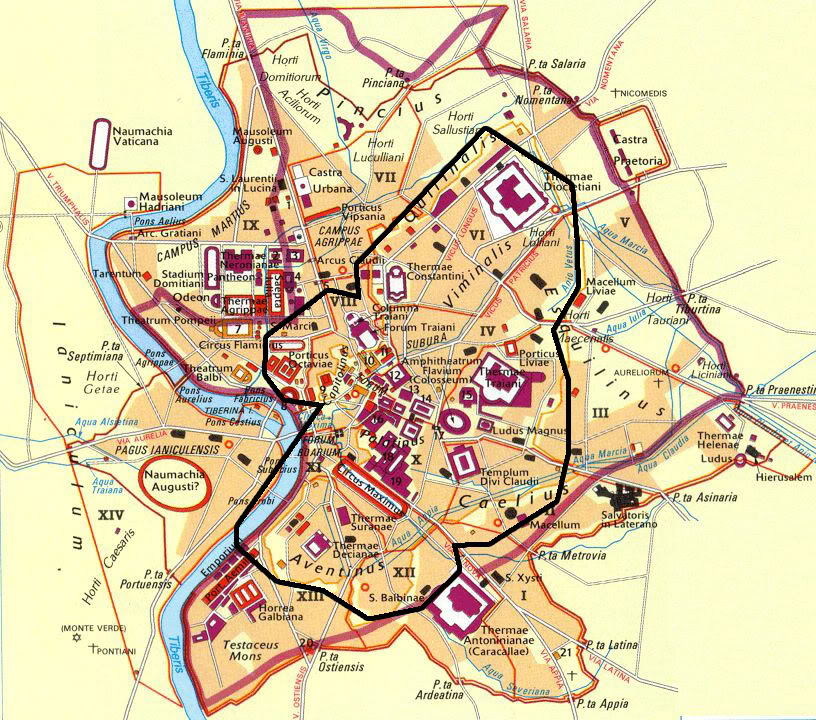 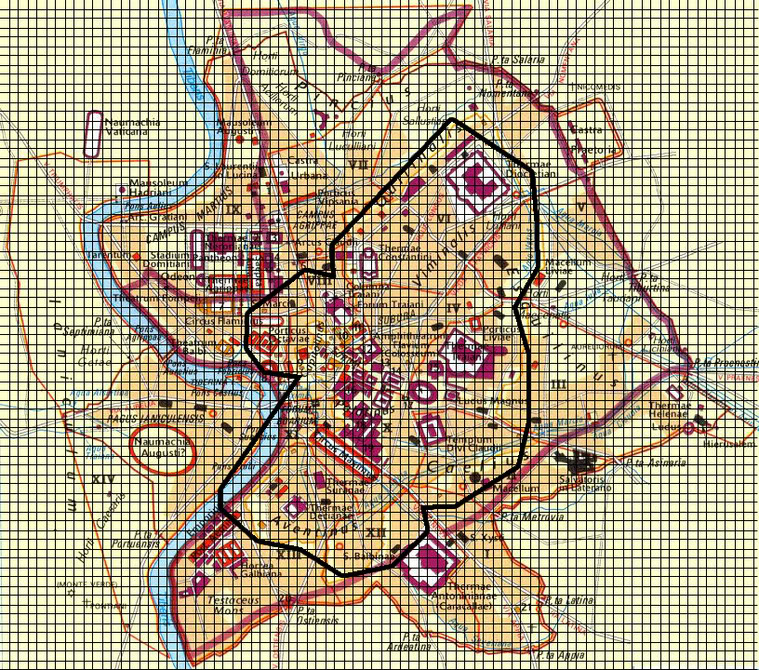 To be noted: the grid will only apply within the black border, so that cuts down all those grid squares by a few thousand, heh.

Nethertheless, theres the city. Still at least 300 maps, which is decent, in my books. If players were to buy housing in the city, better to have an available 100 insula, rather than 5 or 6 houses, as some (unnamed) MMOs do.

Anyway. That's just the city; those maps outside *do* apply for the wilderness, although, I may double them up (every four grid squares = 1 map) just for the player's sake, save them spending hours going a half-mile.

Speaking of distances, that's probably the best way for me to gauge the maps. If I can spend a little time overlaying a ruler which rules a mile, I can then work out the time it takes to travel that distance, work out the player to a decent movement speed, and then cut down or double up the maps accordingly!

Sounds complicated, but, it'll work, in theory.
So, there you go!

Do you plan to make borders for the maps or it will be continous play?
(Borders: You enter a house = loads another map
You walk in one direction too much = loads another map)
Continuous: The map will load continuously and as you walk, you will never (theorically) have to wait an loading screen.

You mean stitched maps; I would like it, but that would require programming. I can see how it's possible, but I havn't the knowledge on how to.
It should be, however, possible as a later edit to the game, when I have coaxed a programmer into the service of Rome! ;)

So, for now, it will be by map. XxY tiles in size. Go to the edge, takes you to the next map.

=/
Well, try to make an "warning" area for fighting and things, as players may run out of a fight by going on an edge. =)

The edge is pretty obvious; the camera stops moving! As your camera/viewscreen strikes the edge, it stops moving. Simple. Classic RPG style. :)

Yup, but the edge may be seen too late and someone might lose a kill or something like that. =P