Post news RSS The Blood. The Sweat. The Testing.

The game has been in testing for a little over a week now, and we've already had 5 versions and multiple hotfixes, eliminating a whole slew of map bugs, crashes, and making huge strides in optimization and reducing the memory used by the game.

While we still have a bit to go, we're feeling really confident with the progress. The game isn't at the stage we can call it truly playable, but each build sees testers being able to play for longer and longer - before a game ending issue strikes. As every bug reveals itself and is quashed, the testers get deeper and deeper into the game. As such, we're super-excited to see where the game will be in a week or two.

Although we'll release when the game is playable and fun, we' re also going to be intent on trapping as many of the 'game ending' problems that plague the 0.2.0 versions as possible before the build is set loose. It's no fun surviving for 3 months to have your game ended by a bug. The build's getting there though, and we feel confident and comfortable to talk about the release being in a matter of 'weeks'. (Still no promises on exactly how many weeks at this time!)

As everyone knows, the music will make a return in RC3. The looping bug that caused music's removal has finally been taken care of, and its wonderful to be able to run around hearing Zach's awesome music completely uninterrupted. Mash is continuing extending the map up until the last moment, so we can make sure the game world is as big as humanly possible, Binky is continuing creating animations that will further the game's immersion and polish, Romain and Lemmy are killing off the remaining bugs and adding those features that slipped through the net while the game was unplayable.

We've also got some intense backroom fiddling from EasyPickins going on - who is continuing to refine the map creation tools that we'll be releasing to the mod community post-launch, while Stormy is also back on board updating his reloading system for our lua-enabled mod system.

Latest from Romain is that he's working on a new character info page which will list the character's professions and traits (with tooltip descriptions, etc) which is important to see now since many of what were skills in 0.2.0 have now been moved to being dynamic traits that are gained and lost due to the player's actions through the game - for example becoming overweight through eating too much and not having enough exercise. (Please note that the following image is a mock-up, but what ends up in the game won't be a million miles away.) 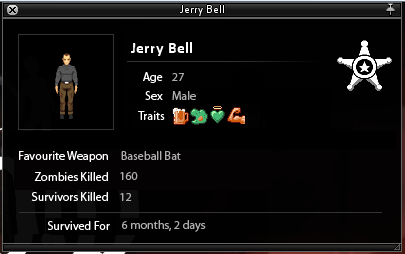 People may remember a long while back we implemented a new particle driven blood system, which hugely improved the gore of the game. Sadly the method we used required way too much memory once blood accumulated, as well as breaking in numerous circumstances and resulting in bright glow in the dark blood. It was labelled as unworkable and removed from the game. That all aside, the tiled blood on the floors looked really naff (mainly due to some tiling issues) so it needed to be fixed. Well, we came up with another method to improve blood and were really happy with the results. Behold!

As stated in the annotations, ignore the ridiculously over the top bleeding at the end of the video. We're currently balancing that. Even so, we think everyone will be happy to see the levels of gore we had back in the days of 0.1.5d (and improved gore at that!), another thing we missed dearly in the 0.2.0 days.

Finally, we want to thank everyone who bought a copy of the game during the 3 days we were collecting for Chloe's indiegogo. We raised $4,030, which was quite incredible. Thank you everyone!

Glad to see that the development is going well. Keep up the good work :)

Keep up the good work :D

I want an update :) This looks great!

Will this awesome game have multiplayer so i can get my friends to play it?

read the other newsposts

Yes this game is getting Mulitplayer

Can we PLEASE just play this game already?
Sorry if that sounds pushy, but in my 24 years of living, this is the most I've ever been teased from someone who is not a girl. You guys rock,you're all fantastic and hard-working, I want you all to succeed, and everything looks amazing ... BUT PLEASE let us just play the damn thing already! It's been an eternity since the last release.

They all ready said it's too buggy for release. You can get RC2.5 so play that. be patient. play a different game while you wait. Thay have been through some tough stuff and they are going at this HARD. It's in the last few weeeks left, wee'll have it within a month.

This is looking so good. I am so excited. the only thing that gets me through the weekend in mondoid. :3 Can't wait to get my zombie slaying hands on this RC3. Keep goin hard!

Why slay them when you can avoid them? Same here though, can't wait.

you can never have enough blood in a zombie game

I really like the status icons on the right.

maan i come here everyday at least 5-10 times to check if they have more news or updates. Need the final product FAST! hurry up please :) am glad this game has lot of support and fan base already.

If the update has come and i open my bought Project zomboid will it update by itself or do i need to reiinstall and stuff?