The biggest visual upgrade in the history of Driftmoon... Coming soon to a Driftmoon near you! :)

The biggest secret of Driftmoon is that it's actually 3D! I bet you thought that it was purely a top-down game, right? Maybe you thought that it would be impossible to turn the camera, even a tiny fraction? Actually that was completely true a week ago, when we suddenly started wondering how the game would look from a more angled viewpoint, and in a mad coding frenzy got to work. 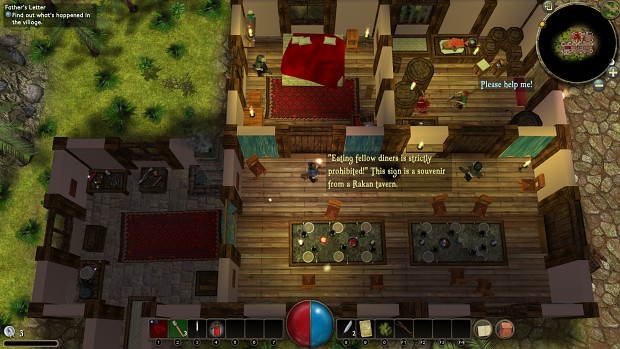 The new camera tilt feature in action, coming soon to a Driftmoon near you
(when we get it fully working and tested)

The top-down camera angle is something that often comes up when people see Driftmoon for the first time. I've never seen a feature that divides people more, some people love it, and some people don't even want to try the game because they fear the perspective. I believe it's largely an issue of what you have become accustomed to. I started my gaming life playing games with a top-down perpective like Ultima VII, and grew up with isometric games like Planescape: Torment. The fully top-down camera of Driftmoon has never been an issue to me, but that may just be because I've been playing too many ancient games. And here's the important philosophical point, I'm not here to make games for me, I'm here to make games for other people to play. That's why we're adding controls to change the camera angle!

The tricky part is that we've originally designed the graphics with a pure top-down viewpoint in mind, and changing the camera even slightly would have resulted in everything looking very strange. That's what we've been doing for the last week, making sure things look good from an angled point of view. Having said that, it won't be possible to change the camera all that much, but I think that even this small change does makes a difference in how the game looks - for the better, of course.

But the best thing is that in the future, all of our players will have the possibility to choose the viewpoint they themselves prefer. 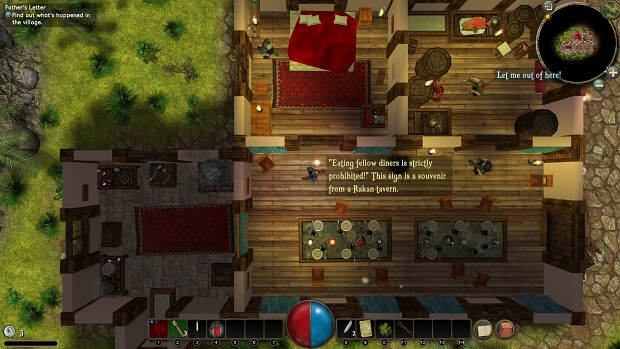 Same screenshot without the tilt

So, which screenshot do you prefer? The fully top-down, or the slightly tilted one?

Modders: The tilt feature won't be enabled in mods by default, but from the next version onwards, it will be possible for modders to enable it through settings.ini.

Oh, and I was just kidding you, this isn't the biggest secret of Driftmoon. You'll have to play the game to find it out.

We're pretty happy with how it's turned out as well. :) And it's already working so well in our own tests, it'll most definitely be available to our players before the official release!

Here's how we're planning to make it work in-game: You can select your favorite viewpoint (anything in-between the limits) by using "page up" and "page down" - and you can change the view whenever you like.

the tilted view raises my enthusiasm for the game a lot

Glad to hear that, plastic77!

By the way, the Driftmoon demo, our editor, and our built-in mod-sharing system is freely available at our site www.instantkingdom.com (pretty soon with the tilt feature enabled), and the adventure is already fully playable from start to finnish. :)

I've played almost through the whole game top down and the only issue I had with it was that a couple times it actually made me feel dizzy, like vertigo, which I've never had issues with in games before. Not even the most severely disorienting FPS games have caused this. Granted it was only a very short, weak feeling, but I think it was from playing in a dark room on a big screen and feeling like I was looking straight down into a hole for a prolonged time. I'm not sure if tilting would fully eliminate this but I'm guessing so.

For modding I would love to use the angled view, especially in the point and click adventure idea I've been playing with. I've come to appreciate Driftmoon top down but I'm always willing to try changes!

Oh, can it be rotated or is it locked in from one direction?

Our plan is to lock it to one direction for the main game. There's no technical reason to do that, but it will give us a better chance of making sure that you can see everything that you're meant to see - so that an item you're meant to find doesn't get obscured by a table for example. We might enable rotating the camera around in mods, but that remains to be seen.