Welcome to The Armory, the complete listing of ER's weapons. Pictures will be added as they come.

With Evil Reincarnated comes brand new weapons, and a new weapon system, very different from the one you are used to in UT.

So let's get started with the weapon system shall we?

This part is for all, single player and multiplayer.

1. You are only allowed to have two weapons at any given time. So if you would like another weapon, you will have to toss one of your current weapons to pick it up. If you would like, you can also throw away your second weapon and just have one, but who would do something like that?

2. Depending on its size, the unused weapon will be on you back, or holstered on your side. Some weapons however you are not allowed to holster, like the Chainsaw, due to its size. And for this, once you switch your weapon you drop it. However it does not take up your first or second slot, so you keep your current weapons.

3. Weapons have melee attacks that can be used. If you manage to sneak up on an opponent, a blow to the back, with any weapon, is a instant death. other than that, the damage dealt depends on the weapon itself.

4. All weapons have recoil on them. No matter how big or small, each weapon has its own recoil, affecting your shot.

5. Gernades do not take up any weapon slot. However you can only cary 2 of each gernade.

This part is for Multiplayer only

1. Every time you respawn in a match you start out with the Pistol, and the Experimental Matter Levitation Device.

This part is for Single player and Co-Op only.

1. If you have completed a previous level, any weapon that you have, and the ammo that you have picked up, carry over to the next level.

Now for the part you all have been waiting for, the weapons of ER.

Experimental Matter Levitation Device: A weapon fresh from U.N.S.A.'s lab. It can fling anything nearby, may it be a projectile, or on the ground at anything by using Plasma. The Plasma charge does not last long, but it automatically recharges. It has a built in device to enshroud the user in a Plasma bubble to protect him/her from harm.

Assault Rifle: This Assault Rifle is the latest in the U.N.S.A.'s arsenal. It comes with an optional scope, or directly linked to your helmet for even more precise shooting. With the weapon zoomed in, your shots are more precise, and even more deadly.

Shotgun: Good for clearing out rooms in a hurry, this shotgun can carry explosive rounds as well as the normal ammo. The explosive rounds penetrate the target exploding within them, causing additional damage.

Double Barrel Shotgun: This weapon would make any hunter happy. When fired, the barrels retract into the gun. This little baby has an Auto Pump feature for any of you who are too lazy to cock the gun. But as an added bonus, it is a bit faster than what a human hand would do, so perhaps it wasn't laziness that killed that blasted cat?

Plasma Rifle: The Portable Plasma Rifle was invented in 2142 by researchers from U.N.S.A. for use of the Military. It fires blue and red balls of plasma. The red plasma, is the coolest and the weakest, but causes no stress to the gun. The blue plasma, is the hottest, and the strongest. It uses over twice the amount of magnetized metal as the red, and requires a longer cool down but it is able to blow through multiple targets.

Chain Gun: Big, bulky, and strong. This behemoth comes in at almost 70 lbs. It has two different settings. Normal, which fires a good quality of bullets with reasonable accuracy while Hyper fires loads of bullets, with very little accuracy. Your choice.

Flamer: Good for people who want their toast burnt and their enemies crispy. It fires ignited propane at a steady pace. It can also build up the propane, creating a ball of fire.

Dark Anti-Matter Cannon: The Dark Anti-Matter Cannon is an experimental weapon with a lot of bugs in its system. One of its bugs is its heat resistant, as it could overheat very quickly, and cause it to detonate, killing anyone dumb enough to stick around. It is the first gun in history to use Dark Matter and Anti-Matter all at once. The projectile will dissolve any organic material, and destroy any tough materials. And once it hits a solid object, it creates a temporary black hole, sucking everything up nearby. After awhile it may seem like it disappeared, but it comes back, throwing up a bloody mess, and spitting out any objects at a high velocity.

Rocket Launcher: The rocket launcher is the most likely weapon that you could kill yourself with. The rockets have a motion control in them, and if activated, will follow the path that the rocket launcher points to, acting as a oversized RC Controller.

Chainsaw: This chainsaw was originally built to help lumberjacks. It included a spear like projectile under the blade, that it fired, and retracted due to it being tethered to the chainsaw. However due to a $50 Million lawsuit by grieving families, it has been locked away and has not been seen for 80 years. 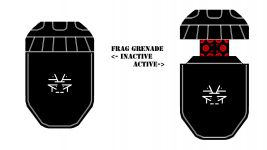 Frag Grenade: An explosive, capsule like grenade. Be careful where you throw it, it may come rolling to your feet. 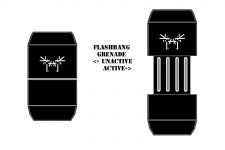 Flashbang Grenade: A blinding and deafening capsule like grenade. It flashes a bright light, blinding the victims, while the high decibel sound deafens them.