The third in a series of fiction posts concerning Unrest, an upcoming RPG set in ancient India.

Bhimra's poor were vast and insatiable. The slums teemed with farmers whose lands had turned to dust, tradesmen whose work was no longer enough to feed their families, and the veterans of a trade conflict that lasted far beyond anyone's expectations. Once Bhimra had been a citadel of affluent merchant and nobles castes and the honest workers who supported them; now the slums swallowed half the city.

It was Ranveer, as he set firm hand on the first rungs of the temple hierarchy, who ventured out into the mazes of human misery bearing bread and medicine. It was he who walked among the lower castes as an equal, unafraid and unaloof. Bali has not forsaken you, he said; I will not either.

Even weeks after it became clear that the newly-appointed priest Ranveer was venturing into the slums to speak, none of the priests or rulers of Bhimra gave the matter much thought. What happened in the slums wasn't important. Beyond the line of shacks and rotten markets was another city altogether.

Perhaps, if they could have seen the streets, packed from end to end, standing in wonder and admiration as Ranveer unfolded his Vision, they would have understood. The slums weren't another city; by now, they were the city.

Ranveer taught them to hate the Naga as demons, adversaries of Bali, invaders at the heart of Bhimra's misfortunes. As to the King and Queen who allowed their immigration, Ranveer said nothing. He didn't need to.
Continued, and progress report, next week. 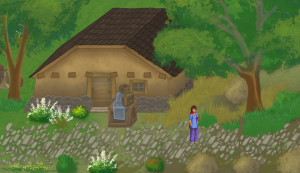 Bhimra's countryside as it will appear in the upcoming demo.


Diary of a Bhimra Spy, Part 3 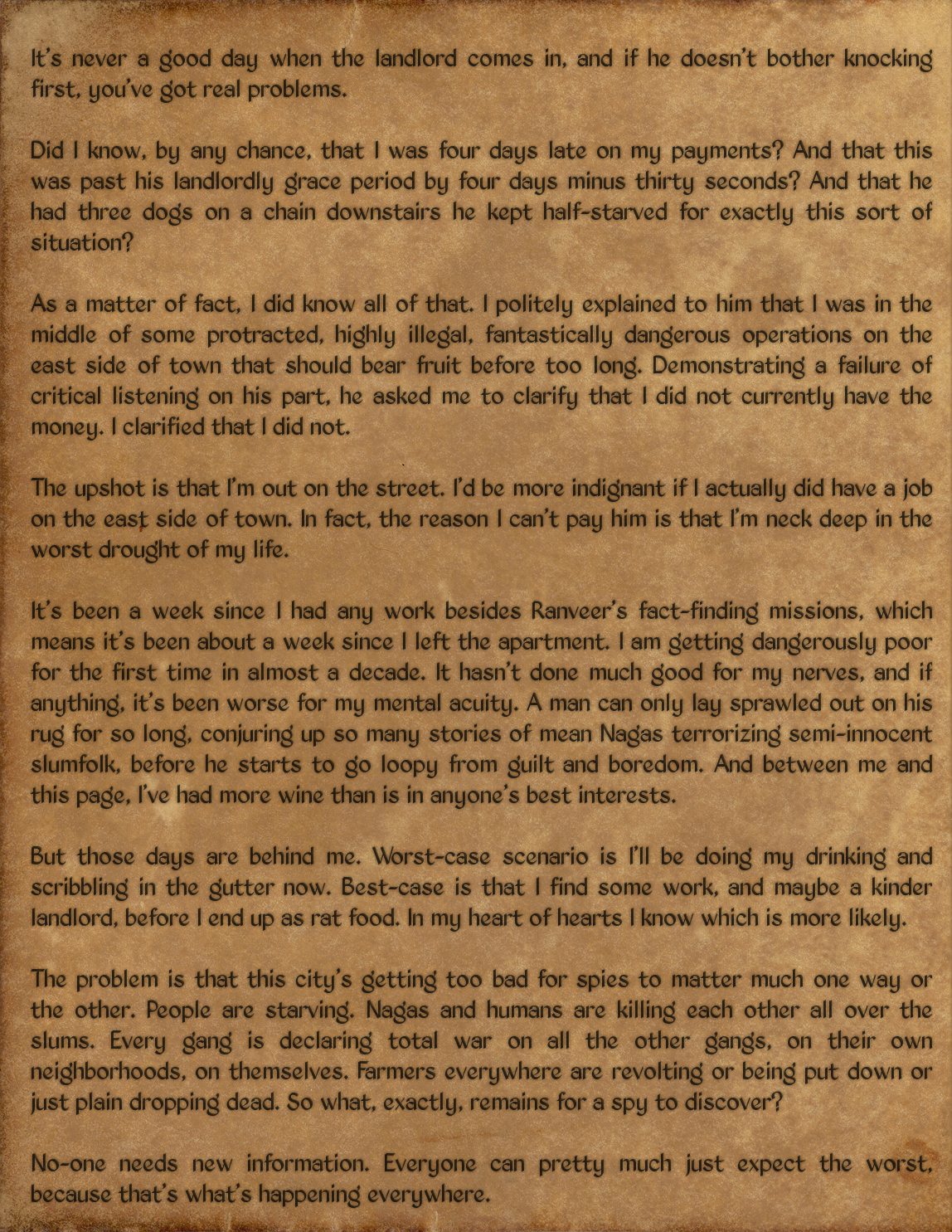 It’s never a good day when the landlord comes in, and if he doesn’t bother knocking first, you’ve got real problems.

Did I know, by any chance, that I was four days late on my payments? And that this was past his landlordly grace period by four days minus thirty seconds? And that he had three dogs on a chain downstairs he kept half-starved for exactly this sort of situation?

As a matter of fact, I did know all of that. I politely explained to him that I was in the middle of some protracted, highly illegal, fantastically dangerous operations on the east side of town that should bear fruit before too long. Demonstrating a failure of critical listening on his part, he asked me to clarify that I did not currently have the money. I clarified that I did not.

The upshot is that I’m out on the street. I’d be more indignant if I actually did have a job on the east side of town. In fact, the reason I can’t pay him is that I’m neck deep in the worst drought of my life.

It’s been a week since I had any work besides Ranveer’s fact-finding missions, which means it’s been about a week since I left the apartment. I am getting dangerously poor for the first time in almost a decade. It hasn’t done much good for my nerves, and if anything, it’s been worse for my mental acuity. A man can only lay sprawled out on his rug for so long, conjuring up so many stories of mean Nagas terrorizing semi-innocent slumfolk, before he starts to go loopy from guilt and boredom. And between me and this page, I’ve had more wine than is in anyone’s best interests.

But those days are behind me. Worst-case scenario is I’ll be doing my drinking and scribbling in the gutter now. Best-case is that I find some work, and maybe a kinder landlord, before I end up as rat food. In my heart of hearts I know which is more likely.

The problem is that this city’s getting too bad for spies to matter much one way or the other. People are starving. Nagas and humans are killing each other all over the slums. Every gang is declaring total war on all the other gangs, on their own neighborhoods, on themselves. Farmers everywhere are revolting or being put down or just plain dropping dead. So what, exactly, remains for a spy to discover?