I have made some (and am making more) significant changes to the game... turning up the fun, and turning down the suck.

I have been working away at this game for what seems like a year (but has only actually been 6 months), and over that time, I have to admit, there have been moments where I completely lost the plot.

At the outset, what I was trying to make was a 4x game that didn't have the combat. I knew that I wasn't going to be able to (due to lack of experience, and limited time) include CPU opponents to play with (or human ones for that matter), so I attempted to find another hook that would make the game interesting.

The hook that I decided upon was a count down timer that would force the player to act quickly and motivate them to continue to perform (or grind) the main game mechanic... mining.
Originally that count down timer came in the form of the games three resources you were mining for in the world (ORE; GEL, to be renamed GOO; and CRYSTAL, which I am shortening to CRY) that were slowly ticking away as your station consumed them. It was an interesting idea, but what it ended up doing wasn't good at all. You were grinding away at collecting the three resources simply to stay alive, with little other motivation or reward, thus killing player motivation and fun.
I attempted to add more reward to offset the pain of the grind by adding a scoring system that had you earn currency (they were still just points, but it was because of the mining company theme) each time you collected resources, built structures, or other key points of progress... still, it wasn't enough. You still had no direct connection with the resources you gathered and any sense of reward for doing so. The points were just points, and the resources were just being consumed without benefit. What it needed was a purpose behind the resources that would empower the player, rather than simply sustain him/her (something play test feedback had also told me, in far more convoluted language).

So, I took a step back and examined what my game had become: what was adding to the original idea, and what was taking away from it. What I came up with were two things to expand on, and two things to diminish.

Expand on Resource Gathering by adding more ways to collect resources, and adding new things to use resources for; and Expand on the board game and card game aesthetic by adding more cards and 'pieces' that you use and place on the 'board'. Diminish the sense of punishment caused by the resource consumption 'timer'; and Diminish the sense of urgency, instead letting the rewards be the primary motivator for resource gathering. 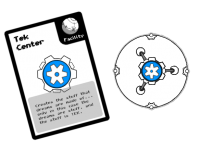 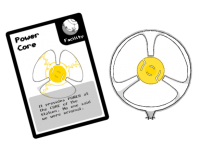 So, with this as the goal, what I have done to change the game so far has been:
1) I have changed the count down timer mechanic to instead be a slower burning 'currency' timer (that was previously my point system that didn't make a whole lot of sense) that still needs some tweaking.
2) I have added a resource cost for research and facility construction (though I am still keeping my TEK only model for working on the game board).
3) I have started to add more facilities (with the goal being to have more than there are spaces to build them, making each time you play the game different).
4) I have also started to work on expanding the research mechanic to separate out the facilities from the upgrades, requiring you to spend resources to purchase the upgrades from each facility.

This has meant that the game is going to take a bit longer to get done (adding a little more than a months work to it), but I am aiming for end of year on XBLIG.

Thanks for your support,
- fidgetwidget.

gr8 job on this game so far! just thinking, why not rename CRYSTAL to GEM?

thats a very good idea... my only concern is then there are two G's Goo and Gem... I'll try it out in play test and see if anyone says its confusing. Thanks :)

Man I love this game! Can't wait for it to be released, and man, those descriptions are so epic, I can't stop laughing hahaha

Finally, may I politely request combat? Games need an antagonist, a badguy, some sort of conflict to make upgrading your stations a worthy goal. I know it will add to the workload, so please just take this as a polite vote on the side of some explosions. Gamers need 'splosions. =)

Keep up the great work! You can do it!

I agree, CRY isn't a good word and GEM is better (thanks to Terry007abc on that one). Then again, I think Vespene Gas is kinda poor choosing too, so maybe bad is good?

I already am using ORE and TEK, and my early concept also used H20 (back when it was far more complicated and way beyond the scope of an 8 month project)... so who knows what might happen... I could turn the crystals into ice and call it ICE! but I doubt it.

Oh, and of course you can politely request combat... though isn't that a little counter productive? shouldn't you violently demand combat, at knife point... that might be a better way to convince me of its merit. Anyways, there are a number of reasons combat is out for this title, but that doesn't mean conflict isn't in the game... and explosions... there are explosions in the game (just not for reasons you might expect). Miner Dig Deep and Harvest Moon are two of my favorite games... so non-violent gaming can be fun, just give it a chance. (Then again, I like Monster Hunter more than either of those...)

Oh, and also in my early concepts... a tower defense mini game where you had to defend against the mobs from the planets you mined... but that too was cut for scope... and because I am tired of tower defense.

Thanks for the support :) I have to admit, this project has burnt me out a few times, so this last leg of things is taking longer than I wanted... so the support helps immensely!