Party of Sin has been bad, very very bad. Dan explains why this is so and how we intend to fix it.

I’d like to come clean about something. We’ve been bad, bad indie developers lately by falling into a trap reserved for big-budget games. Let me explain.

I come from a background in the modding community, specifically Eternal Silence. Eternal Silence is a multiplayer mod, which means you play it over and over again as long as it’s fun. Party of Sin, on the other hand, is singleplayer, which means there is one adventure you complete, one chance to impress the player because chances are they won’t play the same adventure twice.

So here’s where we fell short. With Eternal Silence, I, as the project lead, would post weekly progress updates for the community. I would tell everyone what we’re working on, where we were making progress and what we needed help with. With Party of Sin, I have yet to do this, and as an indie developer we are shooting ourselves in the foot. The reason: We don’t want to lose our punch line with open development. After some thinking, and discussions with a few members of our team, it’s clear that fear is unfounded. Getting the community involved is far more important to our success. So from now on, I pledge to open up development of the game to anyone who wants to read it.

So let’s start with the schedule. The first step to getting you, the community, up to speed is to tell you where we stand. Party of Sin will have 20 levels in 4 worlds, 5 levels per world. We number these levels hell1, hell2, hell3… earth1, earth2.. you get the idea. Currently we have 4 levels “complete”, these are hell1, hell2, earth1 and heaven1. They’ve all been featured in that trailer we launched a few months ago.

So what are we working on now? Our goal is to have the entire Hell world completed by March. We want to get some progression going between our levels, so they’re not disconnected. This will allow us to fix the difficulty curve and get better testing done. One of the big challenges for us in that milestone is getting the Boss for Hell done. Here is the story board for Hell: 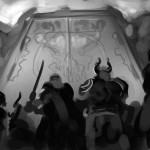 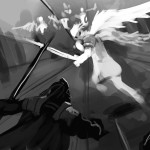 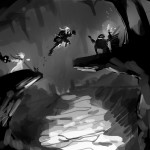 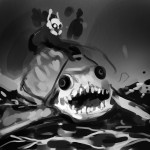 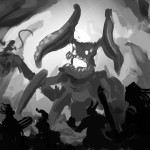 Hell1: Serves as a tutorial level. The sins break out of a prison in hell, in the process unleashing demons and all sorts of nasties. The angels deploy a legion to contain the problem. Each Sin has a specific room to learn his/her power. This is a quiet puzzling level.

Hell2: The battle begins. Angels and Demons are fighting all over and you must escape. Highlights of this level include passing a trench system and a lava waterfall. There are lots of big battles as you go into a cave system to escape the fighting.

Hell3: An underground cave system with lots of lava. The entire place is collapsing and angels are breaching through the ceiling. Luckily, you find an underground submarine pen housing… a Turtle?

Hell4: Ride the lava turtle through a wasteland. The Angels will try to stop you at the dam, but you escape only to find yourself on the shores of an oddly deserted section of hell.

Currently our artists Liz and Paul are finishing up the visuals on hell3. Vincent, our gameplay programmer is putting together a second iteration of hell4 and Alex is working on the first design iteration of hell5. We’ve got a lot of work ahead of us! Pictures below.

Overview of the beginning section of Hell3. The lighting is very temporary. 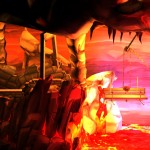 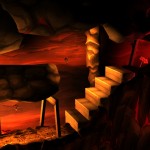 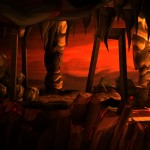 Overview of the beginning section of Hell3. The lighting is very temporary.

I will keep you posted on how things are going.

In other news, Alex and I were featured on Space Television on the program InnerSpace. We’re still waiting for the online version of that to be put up. We’ll post it shortly! Be sure to sign up to our forums or follow us on Twitter.

Thanks for bringing the watcher back to the forefront. Wolfire does an incredible job of this on their website and it's an obvious part of their success.