The British computer games magazine PC Zone, one of the most long-standing gaming publications of England, has published a complete article about our module, centered mainly in the good quality of our gameplay and the well maintained Star Wars setting that involves all the structural of the game. A good point was to mention the powerful lightsaber combat, well known Mount&Blade attacking system.

In the other hand, blasters (even with the disadvantage of the game engine) are very well represented, lots of new galactic races for discovering a new kind of free Role Playing Game sandbox styled. With all the advantages and deep of a popular and well stabilished universe; the famous space opera saga created by George Lucas.

Finally, the SWC 0.9.0.2 version it's also distributed into the Disc of the paper publication. So if you live in United Kingdom, you have another reason for playing Star Wars: Conquest - The Mount&Blade total conversion

You can read on-line the complete review below for free. [The Original Forum Thread + capture here]
Thank you, PC Zone! 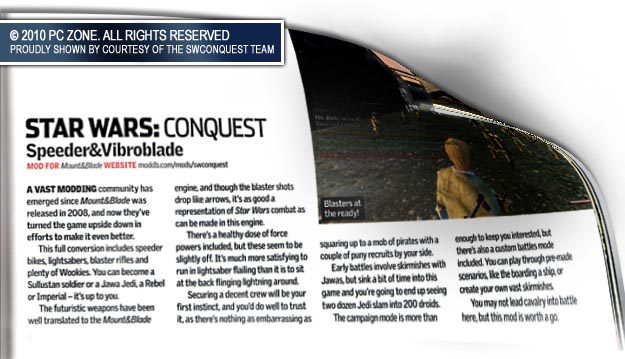 U where in the swedish pc gamer as well :)

Whoa, any chance you can get a upload of this? would be great to see it.

Oh, I forgot to mention that our team mate Vector Dalon, was who told us the news and did the scan of the review. Honor and glory for you! :P

Also thanks everybody for your comments, greatly appreciated...

I would like to see that. Though it would need translation...