In this news post I discuss the current and possible future stages of catching a fish in Deep Blue.

Right now the game is heavily in development, so all of these stages, their difficulty and possible future stages are all in flux at the minute.

Lets dive right in. To start off, the player casts their line out into the water, to do this, you monitor the cast strength bar and cast it when it's at the power you want. In the future, fish will live in different proximities from the cast point, meaning all cast strengths are useful, not just full strength. 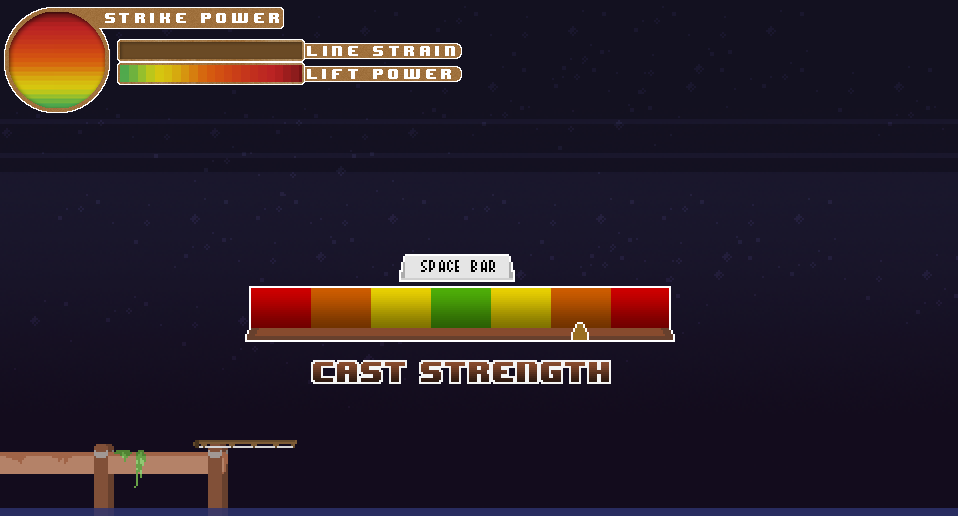 The player hits spacebar when the arrow is at their desired distance and the line is cast.

Once a fish is hooked, the player must then use the available actions to control the strain of the line. Currently, this is done by utilizing both the Strike and Lift (S and L keys) actions to bring the fish closer and keep the strain down. By using both actions with good timing and a bit of luck, you can get the fish close enough for a reel in. The player knows when to reel in when this appears: 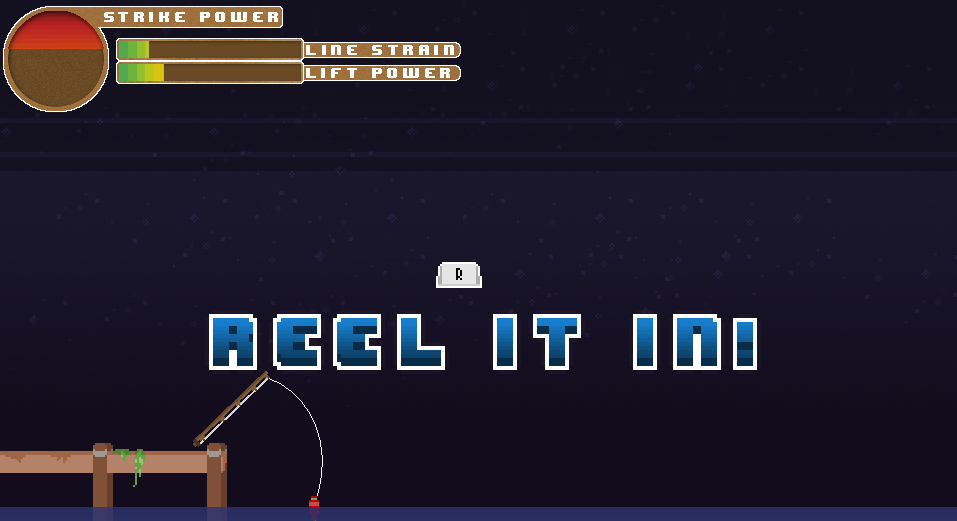 At this point the player needs to hit the reel button (R key) to reel the fish in.

That's all there currently is to reeling in a fish. It is a basic structure to add on to and improve. More variables that scale with fish rarity need to be added to make fish at higher rarities more difficult and a bit more of a challenge.

I think I may also add the necessity to strike (S) as soon as you get a fish on the line to keep it, and if you don't you loose it, such as with real fishing (not that I want this to be super realistic or anything).

Right now, how hard a fish is to catch is pretty much based off it's stamina. Which is it's ability to move at full speed. Once a fish's stamina drops to 0, it's speed and the strain it puts on the line greatly weakens. Stamina is calculated from a fish's weight and rarity, which are all variable between each fish, currently, the only fish in the game is between 50 and 200 weight, and is rarity level 10 (currently planned max, but may go higher than 10). So if it weighs 200, its stamina will be 300, which makes it difficult to keep the line from over-straining until the fish's stamina runs out.

Stamina won't be displayed on the screen, it's a factor based on the fish, and you don't know what the fish is until you reel it in, so I don't think showing you the stamina of the fish is really in the best nature of fishing.

I know this has been a wall of text, but thanks for reading! That's how catching currently works, and I will continue to add on to and develop it!

So much fun looking, good luck!