This article covers some of our exclusive content for Broken Country 1936-1939. 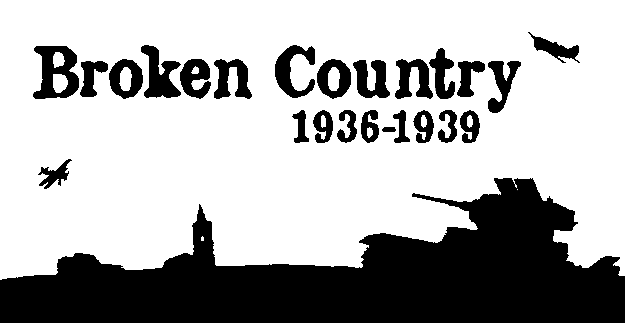 This is the second news article being posted for this project. This time I'll go over four unique weapons available for the Republican and Nationalist factions, two submachineguns, a sidearm and a bayonet.

The situation of the Spanish Military back in the Second Spanish Republic (1931-1939) was hard. This new democratic goverment tried to modernize and educate the country after the end of Miguel Primo de Rivera's dictatorship and the abdication of King Alfonso XIII. This previous dictatorship was marked by militarism and very unpopular colonial wars in Africa (the Rif War) wich led republican politicians to cut a big percentage of the country's military budget.

In this exact moment, military technology from other countries is seeing great progress wich made spanish gun-makers (mainly from the Vasque region) start working on new designs. This new development mostly aimed towards the idea of spanish-made submachineguns and automatic rifles, wich proved to be extremly effective in WW1 and necessary for modern warfare.

Even though the engineers and officers were very much in favor of these developments, the republican high command couldn't afford the adoption of this small arms due to the low budget that they had, wich ended in the adoption or testing of some of those weapons in a very small scale.

As you can probably guess, this situation is quite a challenge for our project when it comes to keeping Day of Infamy's gameplay but also having some historical accuracy. The Spanish Civil War saw the use of many different guns in small and large scales, wich has caused us to make a huge ammount of research to decide wich weapons should and shouldn't be added to the mod.

This first weapon represents the situation of the Spanish Military during the early 30s: 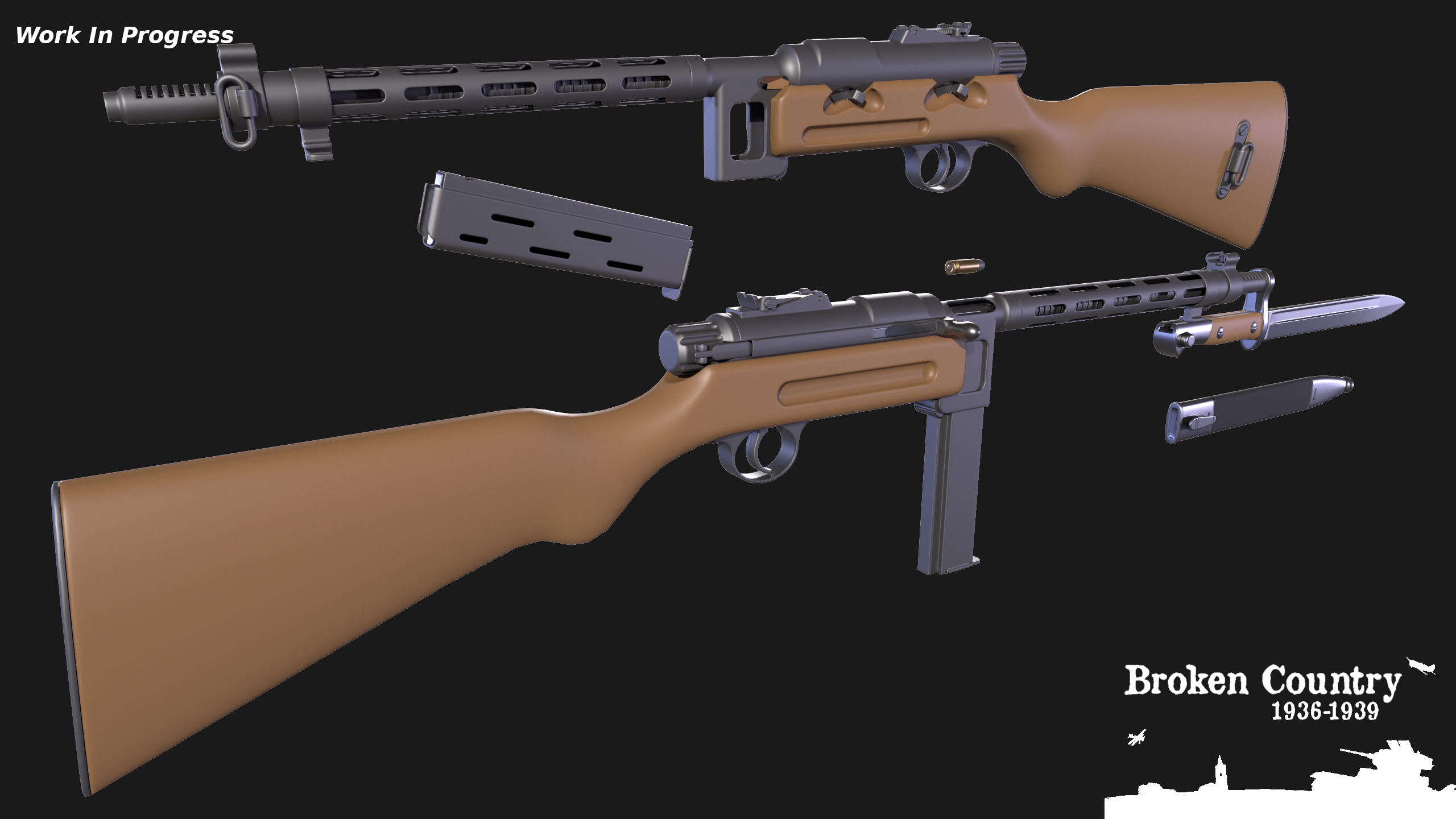 This beutifully made 9mm Largo submachinegun was developed and produced by Star (one of the main and most important spanish gun-makers of the time) between 1934 and 1936. As most of the Interwar Period smgs, it was made with machined metal parts, wich take a huge time to produce and makes it really expensive. This very unique-looking firearm operates from an open bolt, cocked by a non-reciprocating charging handle. It has a very over-engineered system wich allows the gun to use the following firemodes: semi-auto (one shot pher trigger-pull), slow full-auto (around 300 rounds pher minute) and fast full-auto (around 700 rounds pher minute). This feature variates between his brother designs, the RU35 and the TN35. It had a barrel jacket wich protects the user from the heat of the cannon, a 10 or 30 round box magazine, a compensator to reduce recoil, tension sights (similar to a Mauser rifle) and a log wich allows you to stick the spanish issued m1893/m1916 bayonet at the end of the barrel.

This weapon was developed trying to imitate the Spanish Mauser's configuration, wich would make it way more user-friendly for the army and police corps. It was seen as the best option compared to other prototypes during the spanish submachinegun trials, wich led to his adoption by the army in 1935-36 and was also presented for the civilian market. But the gun had a fatal problem, it was expensive and the spanish government couldn't afford mass production, so it was only adoped in small numbers or bought by some officers.

When the war started, foreign designs such as the mp28 and the Erma EMP35 quickly gained a lot of popularity, wich sent the SI35 to obscurity. Those models were less expensive and complex than the SI, so most spanish factories started copying them due to the need of smgs in the front.

Star's smg program was finally abandoned in 1942 when the spanish army adopted the Coruña smg (a copy of the Erma).

Produced by the Labora and Olot factories in Catalonia during 1937-1938, this smg is way simpler than the SI35 and shares more features with his contemporaries (the mp28 and the Erma EMP). It also used the 9mm Largo cartridge (reglamentary of the spanish army since the 1900s), operated from a very simple open bolt system, had cooling rings in the barrel, a pistol grip and was fed with a 20 or 36 round box magazine.

According to some sources, the name Fontbernat comes from the catalan militiaman Enric Fontbernat.

This submachinegun was mainly used by the republican army but also saw service in post-war Spain. 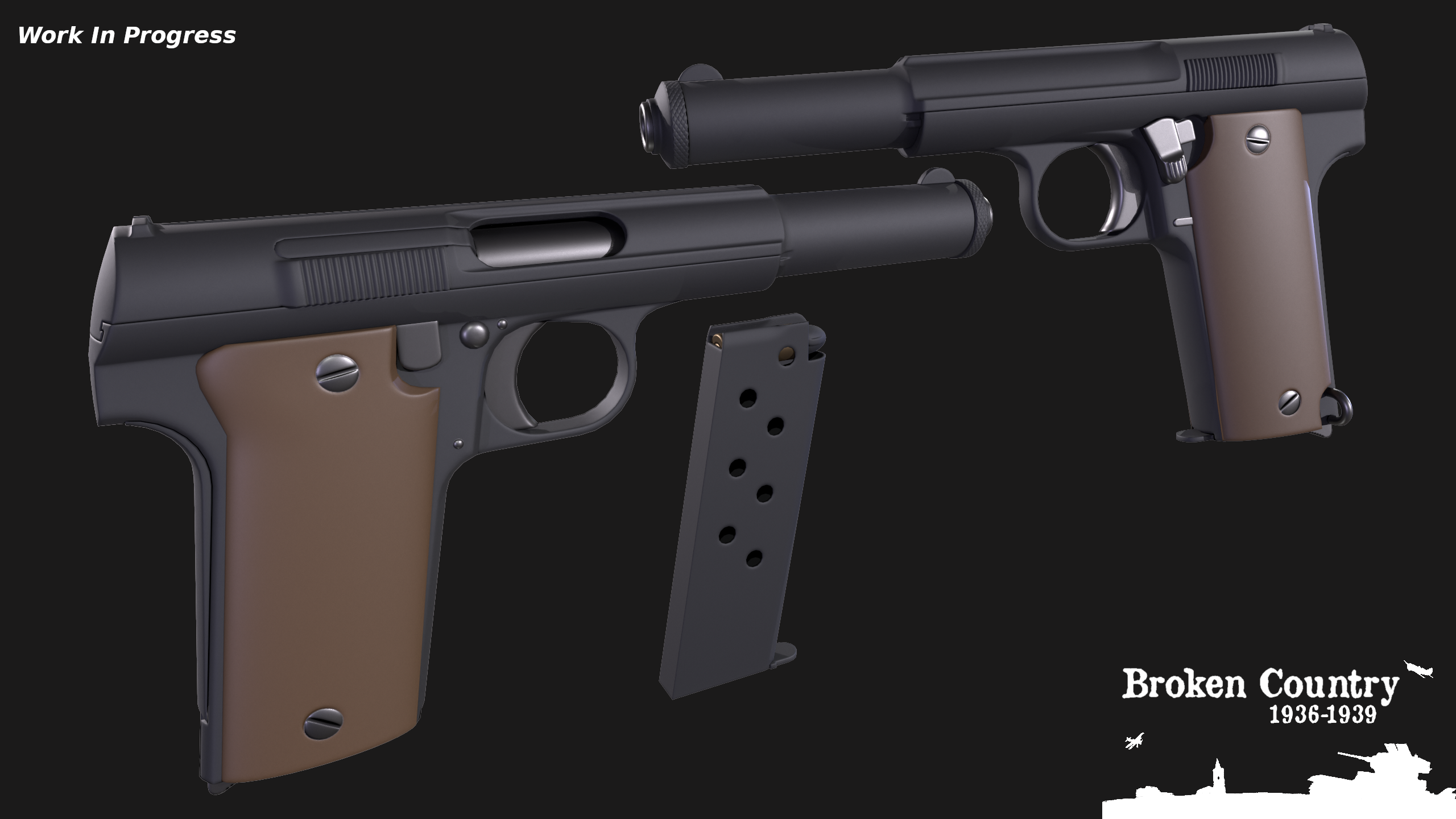 Designed by Esperanza and Unceta and produced in the Astra factory, the Astra 400 was made as a direct improvement of the Campo-Giro m1913, a service pistol wich had some flaws and was about to get dispatched out of service.

Spain had tested many self-loading handgun models since the early 1900s but none of those proved to be reliable enough, wich created a "reglamentary pistol crisis" in the country. This ended in 1921, when the Spanish Goverment re-opened their pistol trials looking for a final candidate. Astra's model 1921 (400) proved to be reliable enough for the spanish authorities, wich decided to adopt the pistol (except the Guardia Civil, wich adopted the Star Model A/B, a copy of the Colt m1911).

This handgun operates from a simple blowback system, uses 8 round 9mm Largo magazines and has decent controls and ergonomics for the time it was adopted.

It saw massive use in the Civil War by both sides and was also exported to Germany in the 40s-50s. Service in Spain ended when the Star was adopted in the 50s, but many Astra 400s were still used until the 80s. 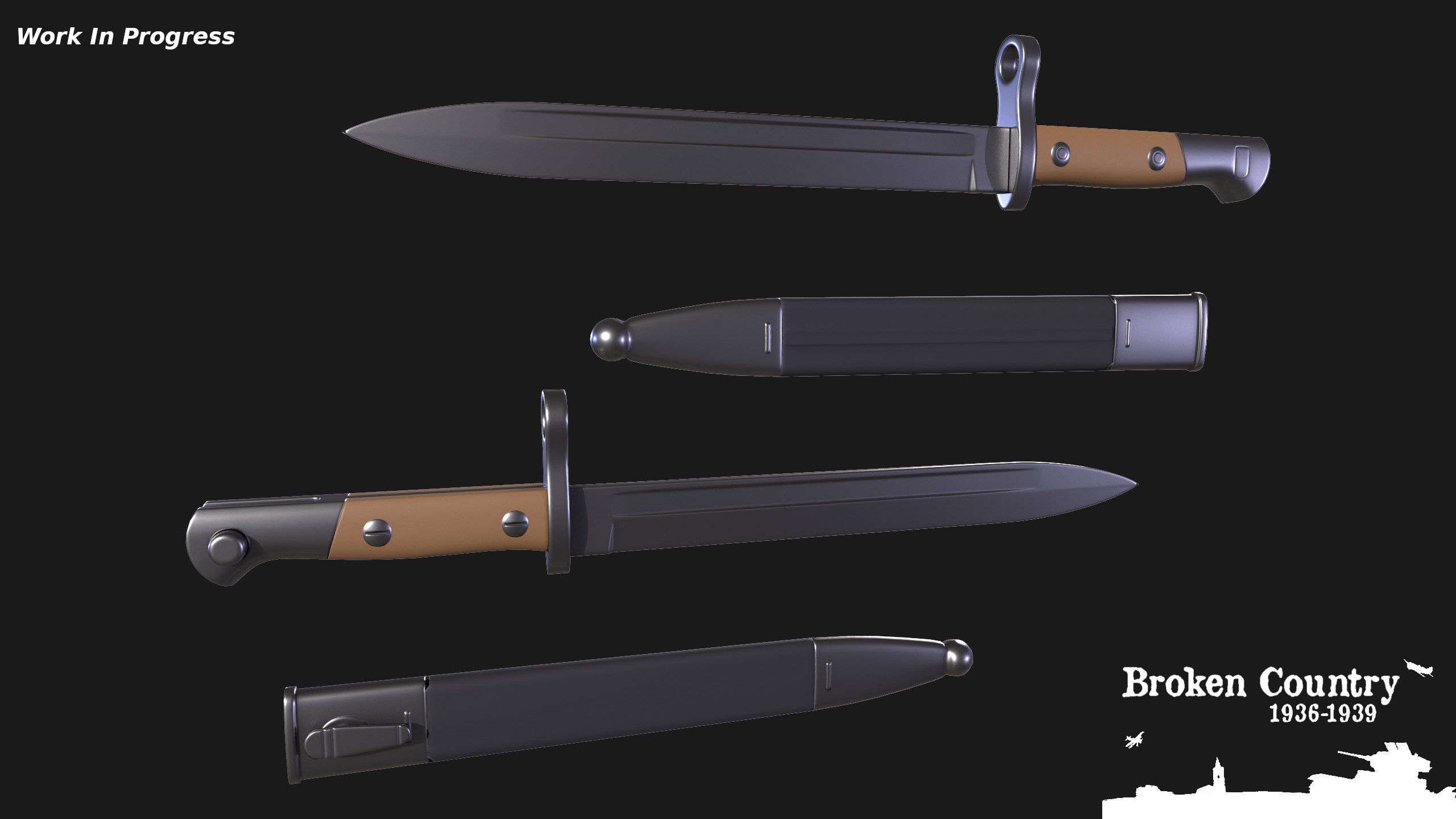 This is not a firearm but a combat tool. The m1893 bayonet (short version) was adopted by the spanish army to complement the Mauser m1893. It was used during the Spanish American War, the Rif War and the Spanish Civil War. 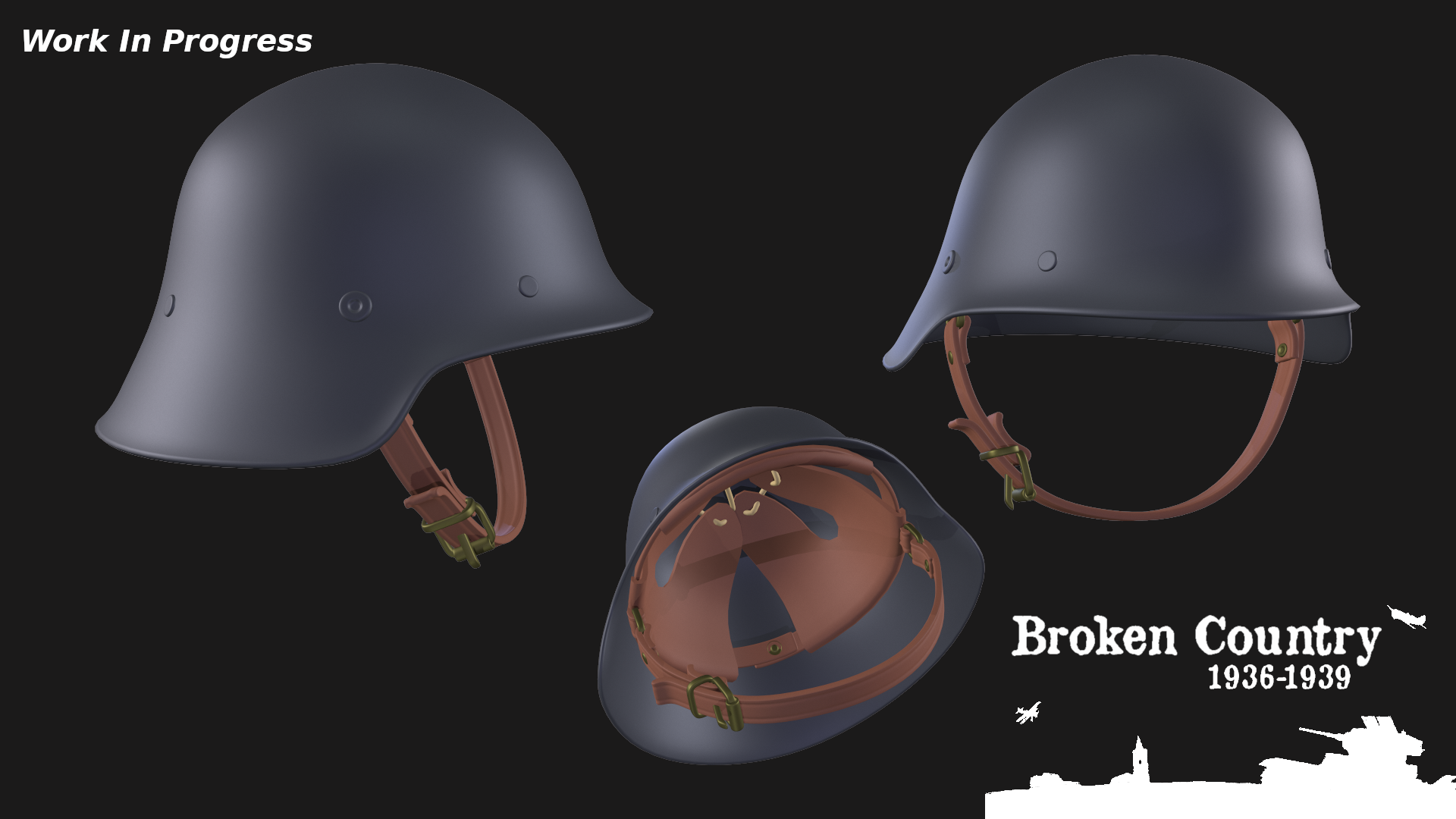 This spanish-made helmet was a part of the revolutionary r26 uniformity presented in 1926, after the spanish army realised their need for a reglamentary helmet during the Rif War.

This helmet saw massive use by all sides during the Civil War and an upgraded version of it was produced by the Republic in 1938 called Casco Azaña m38.

The Trubia m26 and his brother model the Trubia m21 were used until the 40s, when they were replaced by the Z (a copy of the German Stalhelm).

I hope you have enjoyed this second article, this is not the end of our content so I suggest you to join our Discord Server to stay tunned for future posts!