How shooting and passes work in Kopanito and about basic modding support.

Kopanito All-Stars Soccer is an arcade soccer game in development, inspired by Sensible Soccer, Kick Off and Nintendo World Cup. If you like these games, you should also like Kopanito.

Two kinds of shots will be possible to make in Kopanito: direct shot and precise shot.

Direct shot auto-targets the opponents goal, but in most cases it's too weak to bypass a goalkeeper (unless you managed to lure a goalkeeper out of his goal).

Precise shot allows to choose shot direction and apply ball swerve during slow-motion. The longer the slow-motion last, the stronger the shot is and very strong shots are hard to defend by a goalkeeper even if he's standing on the ball's trajectory. Note that during slow-motion ball carrier is vulnerable and can lose ball easily if an opponent is nearby. You can see this feature in action on the video below.

Of course other means of scoring will also be possible, like chip shot, sliding tackle shot and just running into a goal (assuming that a goalkeeper will be somehow outmaneuvered).

Three types of passes will be available: direct pass, lob and through ball.

Direct pass will automagically find a teammate in the given direction and direct ball somewhere nearby.
Lob makes ball fly slower than during direct pass, but allows to bypass opponents on the way.
Through ball will allow to choose direction where ball will be kicked, but requires "manual" receiving of the ball. 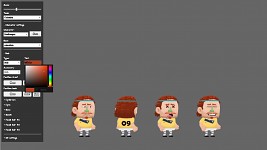 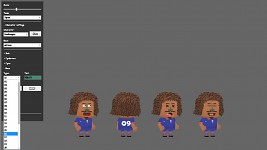 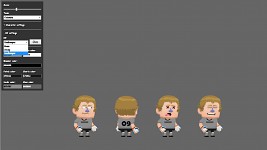 We have a player editor in the works too, currently only for internal purposes, but some time after game release we plan to publish this tool for everyone. The editor allows to customize skin color, hair, face elements and kits currently, but in future it will also allows to create own teams and use own images instead of the predefined elements.

Hi guys, will there be support for modded weather conditions?? Like heavy rain, lightnings, strong wind, and special shots, like boonerang, invisibke shot...?