Happy holidays from the team! We hope you enjoy this update.

Greetings all, happy holidays on behalf of the whole Shokuhō development team! Looks like Santa has flown by and dropped a late delivery for us... it’s the first showcase of assets! 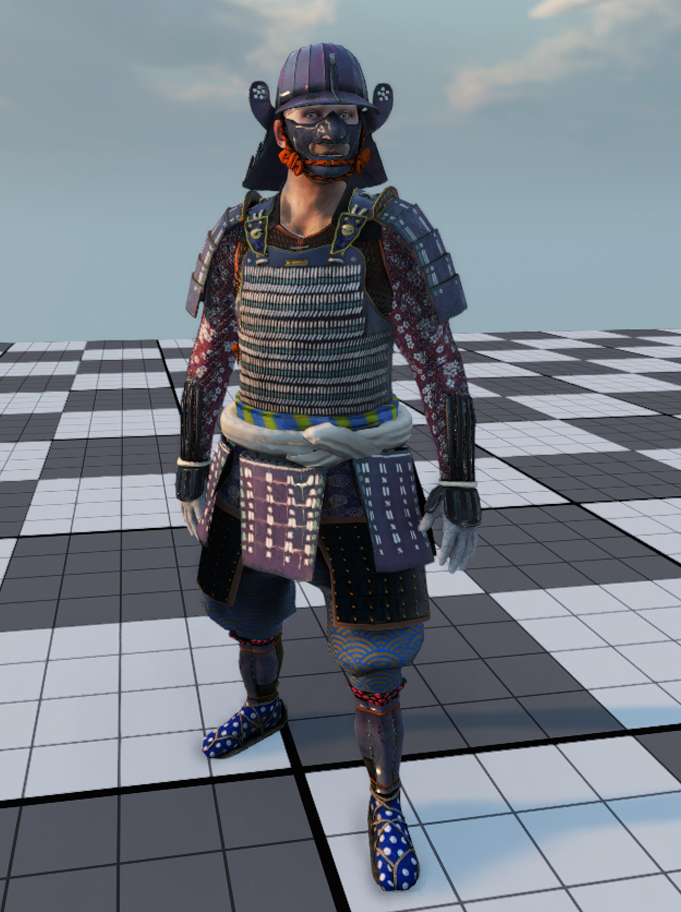 Before we begin, we'd like to thank everyone for the overwhelming support so far. A lot of new faces have joined our Discord (Discord.gg) and the support, questions and offers we've had were more than we could have imagined. Thank you! In the meanwhile, we've been working hard on a showcase.

Ashigaru: Otherwise translated as "light of foot". Armies in Japan, as far back as the 9th century, relied on wealthy landowners for supplies and manpower. These landowners developed into the samurai class, who would levy or conscript peasants that worked their land into armies in times of conflict. By 1568, these peasant levies would develop into what would now more commonly be called the 'ashigaru' - peasant conscripts equipped with largely mass-produced equipment, such as tatami armour, yari spears and yumi bows. The rise of Oda Nobunaga marked a period of transition for the ashigaru, elevated from a militia/farmer status to that of a professional soldier. Firearms were introduced to Japan in 1543, a full 25 years before the starting date of the mod, and quickly became a popular implement of war. Ashigaru in this time would often be equipped with matchlock muskets - an especially valuable weapon in the hands of footmen, needing comparably less training to use efficiently than a longbow. The bodies of the Sengoku Jidai's armies were defined by ranks of massed spearmen, archers and muskets - a role better filled by none other than the ashigaru. 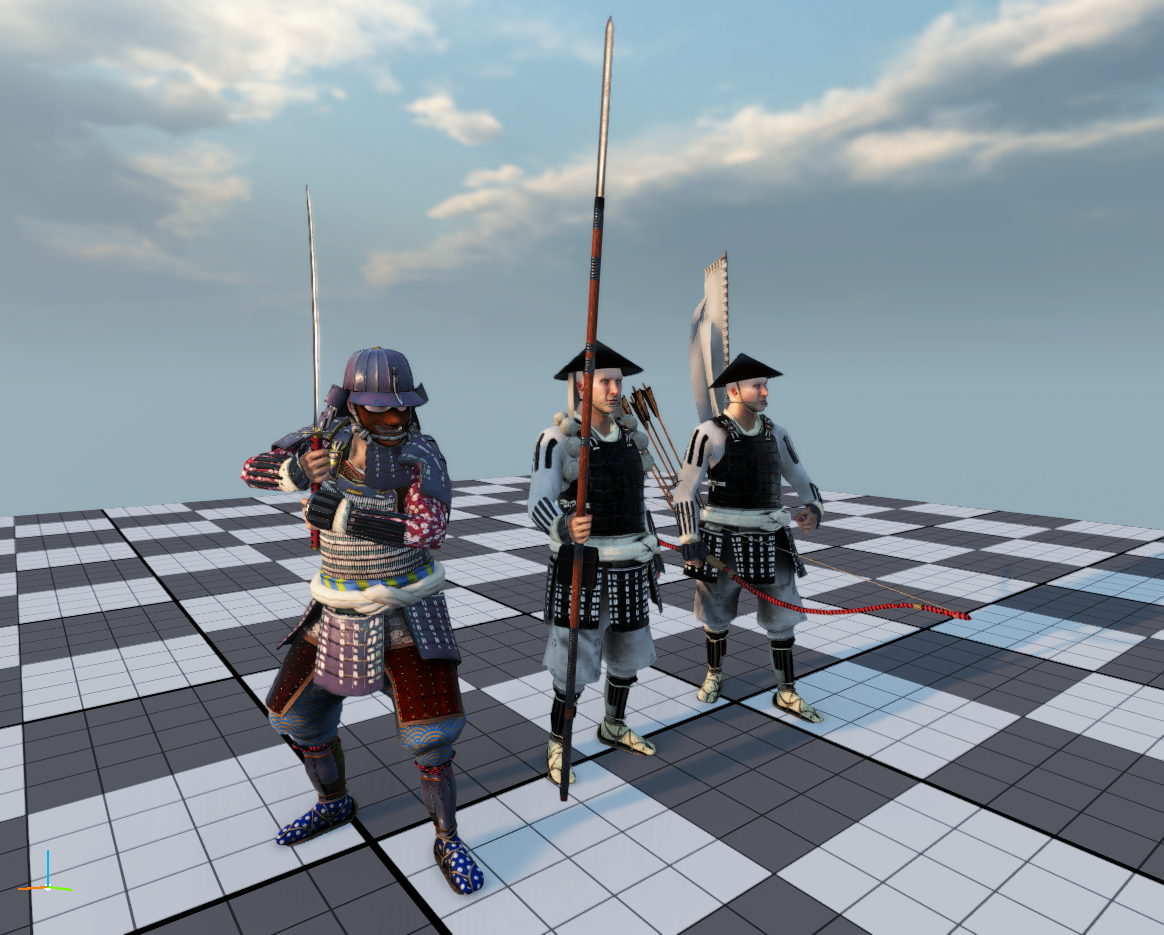 Sohei: Translates to ‘warrior monk/monk soldiers’. Sohei emerged in Japan during the early medieval (or ‘Heian’) period from warring sects of Buddhism vying for Imperial appointments and political prominence. As political circumstances changed in Japan in the 13th and 14th centuries, the role of warrior monks and their participation in war was reduced to mostly lesser sectarian conflicts, as well as brief rebellions. By the time of the Sengoku Jidai, this had changed once more and the sohei emerged as a political and fighting force to be reckoned with - particularly with the onset of the Ikkō-Ikki rebellions. Militant revolutionaries of the Jōdo Shinshū sect, backed by peasant rebels, seized control of Kaga Province and established further power bases in Nagashima and Ishiyama Hongan-ji, eventually attracting the ire of more established samurai clans. The sohei were often instantly recognizable because they wore a white headcowl over their shaved heads, wrapped around until only the eyes were exposed. The most popular weapon in the warrior monk arsenal was the naginata, a vicious glaive-like polearm that they wielded with great proficiency. Many sohei were expert archers and effective warriors. 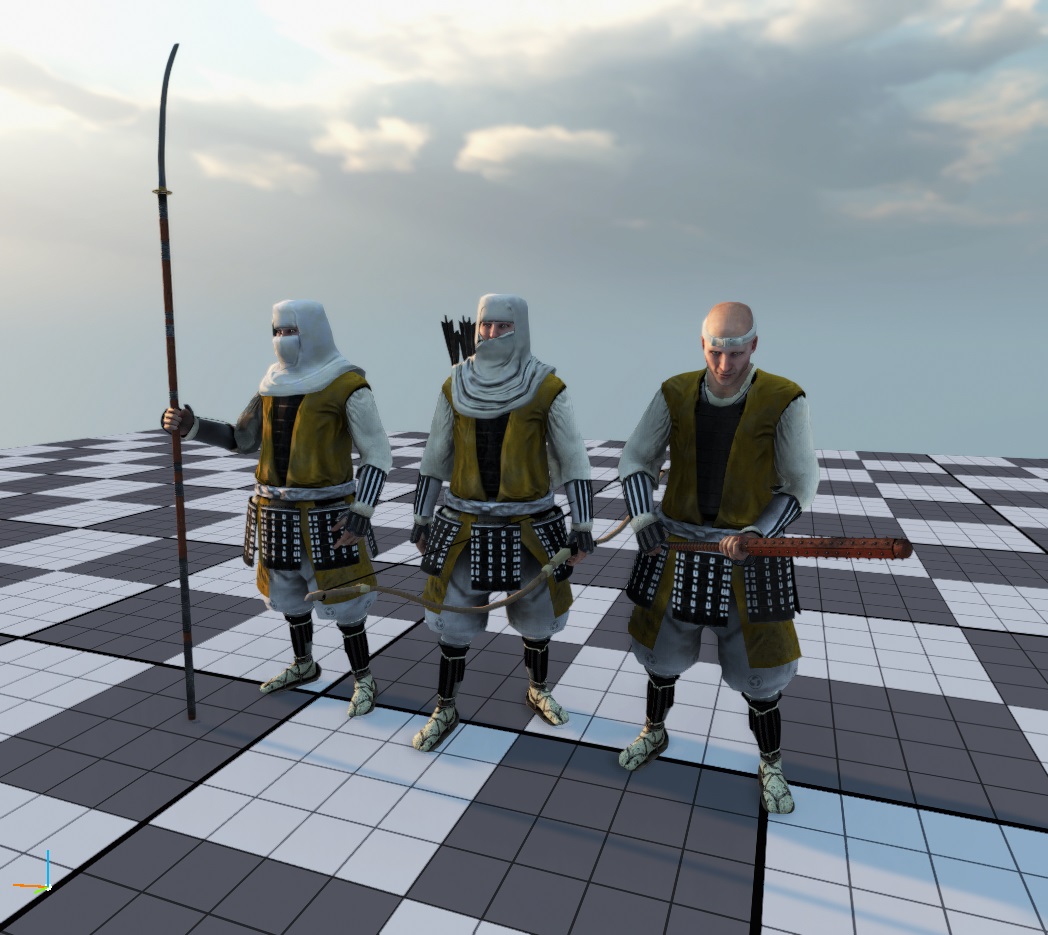 Yari: A straight headed spear manufactured in medieval Japan. Many variants of this weapon exist, but generally it is characterised by a straight double-sided blade measuring several centimetres to even a metre or so in length, mounted atop a pole of hardwood (usually red oak) reinforced with lacquerware. The pole of the spear would be between a metre to six metres long, depending on the variant being made and the size of the people wielding them. A particularly long variant of yari called ‘nagae yari’ became very popular during the later years of the Sengoku Jidai, with a pole measuring between 5 and 6 metres to capitalise on the use of ashigaru against cavalry and armoured opponents.

Yumi: An asymmetrical Japanese bow usually made with a wooden core laminated with bamboo. A very popular weapon amongst the samurai - its development and variants changed massively during the course of the Sengoku Jidai as new techniques were incorporated to adapt to widespread warfare. The term ‘yumi’, as used in English, is a blanket term that encompasses bows from the daikyu (similar to a longbow) to the more compact hankyu (akin to a shortbow). Use of the yumi required the wielder to be trained and experienced in the martial arts of kyūjutsu and kyūdo, proving an unwieldy and complex weapon in the hands of the untrained. Despite a decline in use following the introduction of firearms to Japanese warfare, the yumi remained a common and deadly weapon on the fields of Japan.

Kanabō: The kanabō is a club-like weapon often made of solid wood (although metal variants and similar all-metal weapons exist), often with iron studs or spikes added for additional lethal effect. Related weapons are the tetsubō, ararebō, kanemuchi and aribo, although all share the essential characteristic of being a large heavy weapon used to bludgeon foes into submission/death.

Naginata: The naginata is a fearsome weapon for both cavalry and infantry and saw widespread usage across Japanese battlefields from the Kamakura era (1185-1333) to Muromachi era (1336-1573). Despite the large scale replacement of naginata by yari among common ashigaru soldiers who form the bulk of armies in formations, it was still a weapon of choice either for elite warriors in small scale skirmishes or for shock troopers who do not need to form tight formations and to flank and break enemy formations. It was a markedly popular weapon of choice for warrior monks and, in later Japanese history, onna-bugeisha (female samurai), requiring focus and practice in the naginatajutsu martial art.

If you're interested in the mod or want to join the development team, here's our Community Discord: Discord.gg

With that aside, here's the showcase! (Link: Shokuhō Christmas Special - YouTube)

Guess Santa did not know how to use the gps

Such a precious mod