This month, we release images to the highly anticipated "World Map" and the info on the first race course. We also shed some light on what has been going on over our team's summer break and recap the highlights.

Welcome to the second News article for SHIFT. Unlike the first Major recap new update article, this one will get to the point.

The summer time is nearing an end and the development team has been scattered due to real life summer situations but we are regrouping for 2009. In case you missed prior news, We are no longer known as After Hours Racing, but instead as SHIFT. Also, the release date for the first public beta has been set for December 17, 2010.

If you recently tried visiting our website (www.theshiftgame.com) then you were surprised to see that there still is no active website. Our web coder (Digi) has been hard at work coding the fourth and final web design that is pictured below. It will feature a full community integration as well as constant feeds from the development team with media updates. 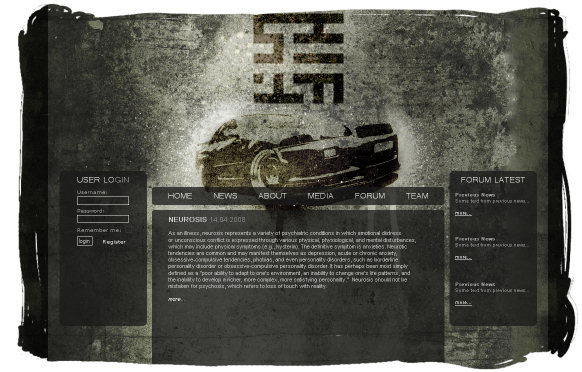 
A Look into SHIFT

On a lighter note, I would like to give the community insight into why I started Shift in the first place.

Anyone who enjoys racing games has heard of the franchise Need for Speed and the reputation that is behind it. I am a strong fan of the series but lately the series has faced intense criticism.

Below is a satirical "Go Green" image that SP4RC0 and I created to show our distaste with the way the NFS franchise was headed. 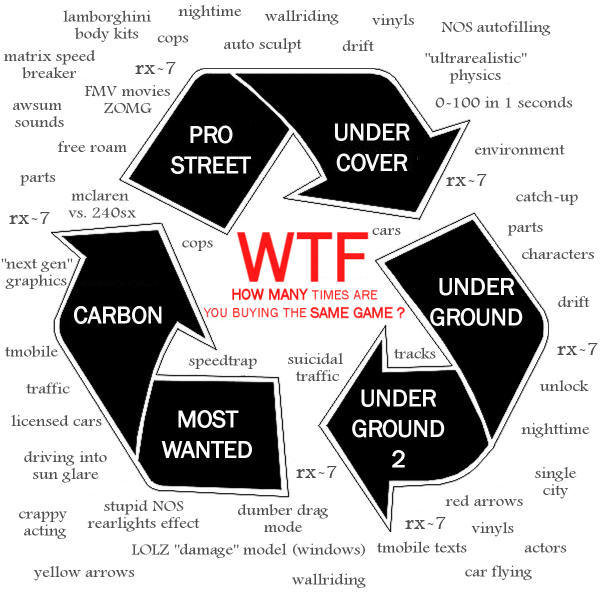 When I began the SHIFT concept almost 3 years ago, I was fed up with the repetitive gameplay and lackluster storyline with the recent NFS games. To set SHIFT apart from other arcade racers, I wanted to create a mod that would deliver a powerful story with deep characterizations as well as a no-nonsense and fun game experience.

To this day, I still believe in that. Wish us luck!

Due to real life summer plans, progress on structures has been slow and instead, we have been focusing on the gameplay and physics code. But either way, here is the most recent structure (a store front). 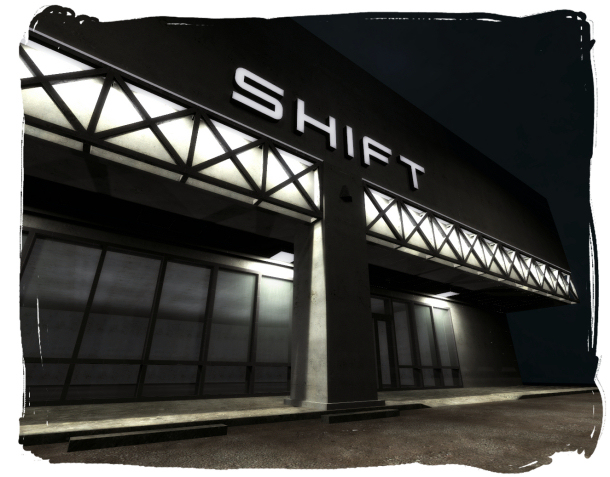 One of the bigger pieces of unreleased media is the world map. To put it in better perspective, below are two images; The first one being that of the first race course being developed for SHIFT (and will be released with the public beta). It was created in photoshop using a REAL top down view in side of the mod. Below that is the "world map" view that shows the entire district that players will choose races from. The individual tracks will be derived from the full world map; And to reiterate: No, there is no free roam in this mod. 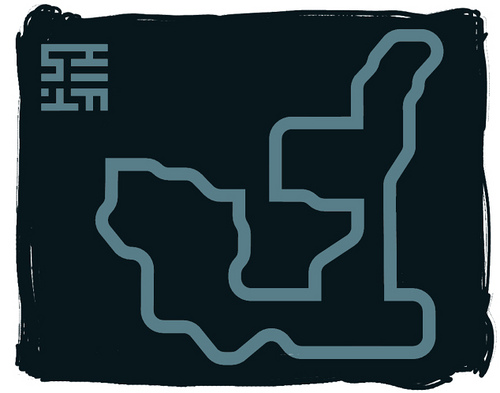 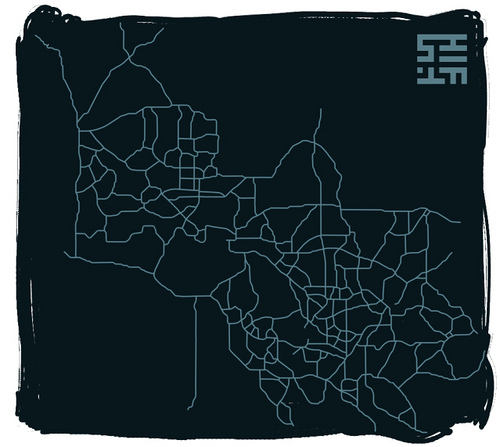 With the help of a talented programmer (Neo), we are able to implement an analog tachometer complete with digital MPH/KMH readout and nitrous gauge. The guage was created by "Tar." 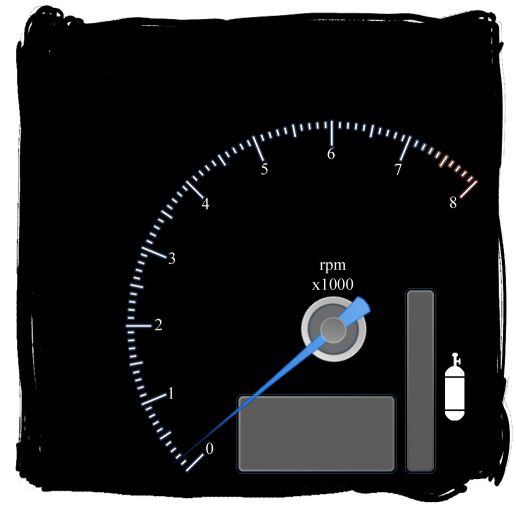 Each news release, we will give a shout out to a community member who really did the community a great service. This month, that person is JHolyBigJesus.

JHolyBigJesus person is an extremely talented 3d modeler and joined the team at the perfect time to rejuvenate our teams hope of releasing top quality content. Unfortunately, JHolyBigJesus was involved in an automobile accident and had to put his role with SHIFT on hold.

We wish him a speedy recovery.

This mod would NOT be where it is with out the help of my talented friends. If you think SHIFT is something you would be proud of and would want to help out, send me a PM over ModDB and I will arrange it. Currently, all the main roles to get this mod working are already taken, but we are still looking for several people to fill these roles to help this mod advance.

If you are interested in SHIFT and want to be a part of the community, make sure to visit these links.

Just a question...modelling cars would consist in both exteriors and interiors?

Sounds good :)
Looking forward to more content, and btw, I joined your steam group, you seemed kinda lonely in there:p

I love the way your Analog Tachometer looks; it's very classy. Plus, your world map seems impressively big, and I agree with your feeling on the Need for Speed franchise (even though I love Most Wanted). This is going to be a definite mod for every racing lover with Half-Life 2.

The storefront looks great, but the world map could use some colour ;D

Try to keep the hud simple and straightforward. I'd rather see more track then Mph

wow, looks great and agree with whats said about NFS, just gone down hilland keeps going down hill. look forward to seeing what this would be like.

I pretty much stopped playing NFS games and just moved to sims but the new NFS SHIFT looks interesting.

As for what our shift would be like; We plan to match quality of content to that of NFS Underground. No less. Its big shoes to fill but we will try our best.

Better to set high goals than low ones, right?

Not to try and put you down, but that can be a tall order.

Lower goals are much easier to accomplish and keep track of. High goals sound nice, but can be daunting if taken down improperly.

Despite the fact the I like some of the aspects of the NFS series (Custimization is by far my favorite thing in racing games), I do agree that the series has gone downhill. I'll for sure take a look at this. Sadly, I'll most likely end up getting one of those "It's cool, but not my thing" feelings about it.

I'm a fan of realistic games, but there's a point where realistic isn't very fun.

Yeah, sorry about my typo.

That way your non American friends can play Shift and feel right at home!

but what side will the driver's seat be on?

Some cars should have the seat in the right side, like the Japanese Toyota Corolla, aka Sprinter Trueno AE86... After all, japanese cars got the seat on the right if Im not mistaken.

Much of Europe has the seat on the right... Well at least the UK

Is this mod going to be free? Because I thought EA was coming up with NFS Shift which is not free if I am right.

Source engine has lag in multiplayer when driving vehicles or using physics, hope you realize that.

I hope you also add proper AI which should be possible. Also add a statistics system with the amount of races won and races lost and maybe the longest drift or whatever.

If you need good music I want to help. I am a compositor, or a DJ. I am specialized in tuning music also known as hardstyle, jumpstyle.
code an MP3 ingame and I will help

I just worry about its physics... :S

Great, glad to see some news! Now all I want if for you to focus on getting the first car working!

The maps can be built around the cars easily, but with the physics, cars and controls hanging over you head I suggest you focus working on a beta car first?

We already have our first car working (although not our model). We were working on getting our own customizable car ingame, but were interrupted by our modelers accident.

Im glad you approve though! :D

Oh yeah man well the model is not important really. Its getting the physics all sorted and such first!

I'm basically saying how I would prioritise the mod development. As the cars are the most important hard thing in the mod, they should be sorted first. Imagine making loads of amazing maps and having to let them go to waste because the cars can not work for some reason. If not then ignore me and carry on! :D

For example in my mod I am doing the weapons zombies and gamemodes first before the maps as maps can work around anything and more "sure" on working if that makes sense?

Anyway keep up the good work!

Good luck! This is looking like an amazing mod, I'd love to see a serious racing game come from the Source Engine.

By the way, have you seen Need for Speed Shift? :P (not saying you stole the idea in any way, just to clear that up)

Oh, I hope you get rid of the stupid "catch up" mechanics! If my opponent wrecks early in the race, the last thing I want to see is him passing me just before the finish line after I run an error free race.

By the way, I know PC racing games have moved away from this, but have you considered adding in "spit screen" racing? This was always my favorite feature with the early NFS series, since it allowed my sister and I to really duke it out in a fun race. Nowadays you can only find this on consoles, and I hate paying out that sort of cash for something with no practical functions.