We won't tell you nothin'! Except when it comes to the two races in Refusion.

Well, once again we have to keep our mouths shut when it comes to news. A lot of stuff is happening right now, but it has to remain under wraps for the time being. Development has not slowed; we just can't tell you what's going on is all. That will change soon.

We can give you some interesting information regarding the content of the game itself, however. And true to our word last week, we will be discussing the two races in Refusion: Humans and Skoromans. 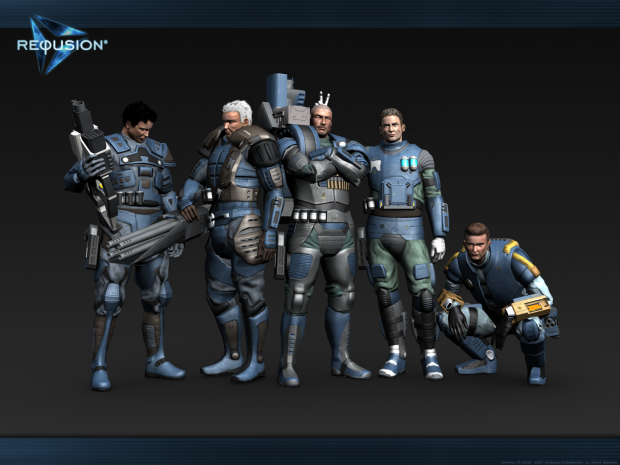 Humans in Refusion utilize a lot of the conventional ordinances we use today: solid rounds, explosive projectiles, and a few other futuristic weapons. Their design is conventional, yet sci-fi. While the tanks are huge and the bombers menacing, they follow similar blueprints and patterns of vehicles we might know today, or could imagine being built by humans.

On a strategic level, Humans are best at taking the direct approach. Forest blocking your view? Mow it down and set up camp. The maneuverability of the ground units reflect this approach: not easy to turn, but they got a great plate of armor.

Of the two main resources in the game, "Setore" (a compressed quantity of mass also used as currency) is most precious to humans. They use it in much greater quantities than their alien rivals in order to create the hulking vehicles and thick armor necessary to carry on their tactics.

In short, Humans are excellent at taking things down from the front. While not exactly quiet about their work, they more than compensate for it in firepower. 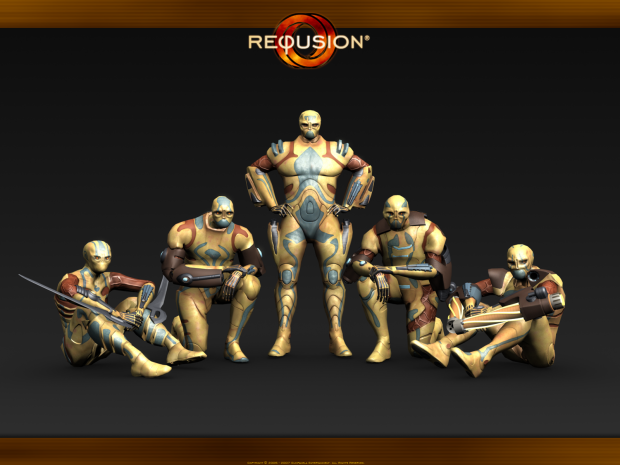 Skoromans, the only sentient race as yet discovered by humans, are no pushovers. Standing over seven feet tall on average, they give off little to no heat signature and have a soft spot for nature.

In some ways the Skoromans are much more advanced than humans. Utilizing shield technology and energy weapons, the Skoromans can inflict damage that is alien to their human rivals (pun unintended). Other ordinances, such as nanomachines, do little to no initial damage but continue to eat away over time. The architecture, while similar to accomodate a bipedal humanoid, is at the same time otherworldly. Sometimes they approach a design in a similar way to human asthetics, and at other times go a different direction. It is at once familiar and alien.

While shielding technology beefs up the Skoroman vehicles as well as some of their infantry, they tend to be physically weaker. Even with breakthroughs in nanorepair, there's only so much the tiny robots can replicate before you have more nanos than metal. Thus, Skoromans tend to use more surgical strikes, hit-and-run, and guerilla battles. That's not to say that the Skoroman armies can't hold their own; they just prefer to use more subtle approaches and conserve their strength.

While humans gobble up mass, Skoromans have a sweet tooth for energy. The basis of their weapons, shields and other tech is primarily rooted in this resource, and they need lots of it. Gathering it takes more effort, but the payoff - shields, energy weapons, nanotech - is worth it.

Being efficient economically and environmentally is the Skoroman motto, and even though it makes war a tougher game in some ways, it more than compensates in the long run.

As the game is still in development, these ideas and concepts are likely to change. While we feel these roles and abilities can be successfully implemented, more interesting, unique, and perhaps realistic approaches may become noticeable. If you have any questions, notes or even suggestions, leave a comment. We just might respond.

Telling me that you can't tell me stuff makes me anxious. I can't wait to find out!

How is energy gathered, is it only produced at certain spots that you need to control, or is it generated from a building that can be placed anywhere?

Energy is produced in a variety of ways, depending on race and location. Think of how we make energy; we don't use just one method, we have geothermal, wind, nuclear, etc. There will be a number of options that have different prerequisites.