I think I've said plenty about the concept of Scribble II in the last news article, so let's concentrate on what has happened since. After letting this thing sit quietly for some time (because I had no motivation to do anything, which makes good results harder to come by, also Minecraft was more fun at the time), I finally started implementing new stuff. The player character is mostly done, the differences from this to the final version is that the final one has several different sprites for different levels. You can run, you can jump, you can kill! Rargh!

But what I am specifically proud of is this: 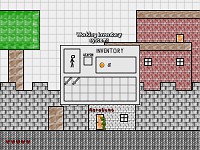 A fully working inventory. Keep in mind that I never coded an RPG before and thus this is the very, very first inventory I ever made. Though I have to admit that I actually had to rewrite large potions of the code after this shot was made and labelled "Working" inventory system. Four effing times. Next up is implementing all objects (the list has nine entries right now, things may be added. Or not be added. We'll see) and only then trying to put together a buy menu for the merchants. I'm scared of that part already.