T
oday we've released the first real public alpha version of the Unreal Tournament 3 mod Sanctum. It can be found in our Downloads. We are very interested in what you have to say about Sanctum and encourage you to give us feedback in the comments on our page or by e-mailing me directly at Henriknik (at) hotmail.com. This is only an alpha version and will get improved on with bug fixes and plenty of additional content. Your feedback will be of great value for us.

Due to the problems with the corrupt files, we've chosen to upload torrents of both a complete working zip and a fix containing only the three files that have been corrupted for some downloaders: 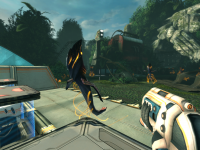 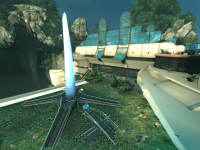 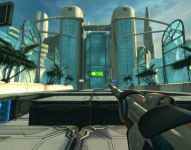 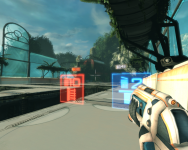 - Description -
Sanctum is a total conversion mod for Unreal Tournament 3. It is being developed during a ten week long school project by Coffee Stain Studios, a group consisting of eleven university students at Högskolan I Skövde, Sweden. Sanctum is a first person tower defense game where you take on the role as Skye, a female elite soldier. Your sole purpose is to defend your hometown, Elysion One, from the invading force of mysterious alien creatures. Choose from different defensive formations and upgrade deadly gatling turrets to aid you in the defense of the city. Use hand held weapons to give you an advantage.

The underlying reason for developing Sanctum was to take the popular tower defense game mode and get it into a first person perspective. We also developed a quite unique and outstanding art style and feel of the game, being communicated through choice of colours, musical theme and design on world objects. The style is in distinct contrast to the overall look and feel of Unreal Tournament 3 and thus proves that something very different can be produced by the popular engine.

The decision of making a total conversion was made so that we could produce all original
content instead of re-using the content by Unreal Tournament 3. This means that all the models,
textures, sounds and music is or will be developed by us. We are planning on further developing Sanctum in a direction where we add Co-op, different game types and additional turret, enemy and weapon types.

wow, this is amazing! DOWNLOADING!

Holy crap, it IS amazing. This is like Tower Defense for a first person shooter. DOWNLOADING!

This is coop right?

The best part about Tower Defense is being able to play with friends.

The article states that coop will be implemented, but it's not in this one. Remember, this is only a alpha.

Anyway, it looks great, but I wont play it just yet, after my upgrade I will:).

Awesome, who ever decided to turn Tower Defense style map into a first person shooter is a freaking genius.

I think a lot of people have had that idea but they are the first ones to pull it off...
AWESOME!

theres some problems with the file, mine was corrupted and then the installation is a bit confusing

There are three corrupt files in the zip, unfortunately.

When I finnished playd it,1st thing in my mind-OH MY GOD!!! It was AWESOME!!! I have a lot of fun,and this is just alpha. Guys,your on the right way! This mod have a big potential. And if it will be coop-it will freaky awesome!!! I wish you success, you have all of this is to obtaining-interesting gameplay, beautiful and atmospheric world, and cool music! Hope you add something to see how much material I have and some features for bionic hand. And plz add this antennas on walker like on concepts :)

And i have some troubles with unpucking-3 files(music.upk and 2 others upk i not remeber) have error crc and do not want unpucking. :(

Yeah good job being on point there, already mentioned this on the download itself.

Angry_Bot, let people send what replies they want, not everyone wants to go around on the moddb page for this mod and look on every single reply.
I think they already knew about the corrupt files when you wrote your reply on someone elses reply.

And yeah, it just seems like the download itself is a better place for the comment since the devs can re-upload it or issue notices there, whereas on the news post people can get the wrong idea pretty easily (once the issue has been resolved). Unless, of course, they read some of the later comments to find out if it's been fixed or not. Just seems like common sense to me.

You should be able to see the amount of energy/materials you have on two different signs situated on the bridge and next to the city entrance. Unless this got removed due to the package problems.

We have gotten reports about these errors and are working on solving them. Thanks for the reports and we're sorry for the trouble it might have caused. It's just sad that it always ends up corrupted, no matter how many times you try it yourself before uploading ;)

May be just little patch with this 3 files?

I'll have to check how exactly we're going to solve it. But yes, we might both update the corrupt zip and make a smaller patch for the rest of you who have already downloaded the file :) I'll take that into consideration.

Now we are starting to see the real contestants for MSUC.

This had to make me lol, Im sure its a pretty good mod, I tried to check it out but I have no idea how to install ut3 mods.

Also I SWEAR they got this idea from a map I was working on awhile back for obsidian conflict (hl2 mod). I stopped working on the map due to lack of interest and motivation.

And I think its funny the main characters name is Skye, although I am a guy.

Otherwise, keep up the great work, and try to release a installer, because ut3 is not a mod friendly game, if you know what i mean.

Update: Due to the problems with the corrupt files, we've chosen to upload torrents of both a complete working zip and a fix containing only the three files that have been corrupted for some downloaders:

Skye: UT3 >>IS<< a mod friendly game. Having previously owned UT2K4 and playing the great mods for that, I suspected UT3 would have a similar turnout; the only reason I purchased UT3 was to play the great mods in store for it.

Darknessvamp: I give them props for uploading a torrent on TPB, it's helping to legitimize torrents.

Developers: ******* awesome concept for a mod and great execution.

Thank you for your kind and very well put words :) And I agree on the torrents part.

There are seeds for the fix. It might just be the tracker that needs time to refresh. I and a few others have been seeding non-stop since it got uploaded, and I can see that there are a few seeders as we speak.

Just give it a little time.

I have now also uploaded the fixed version to ModDB. I can however not guarantee that it will work better, this time I'm however 100% sure that the file worked when I started to upload, but it could once again have gotten corrupted somewhere along the way. I'm sure I'll get to hear reports if that's the case.

Wow, this looks fantastic and a very good idea indeed. If only I had Unreal 3. pitty.

I shoulda got a thanks, instead of having the main character named after me, I guess i cant beat that either. Because I cannot shake the feeling that they saw my map thing i made for obsidian conflict.

Green td, and mafa td for the win.

Well, I can only say that at least I personally have never seen nor heard of your map. I can however not guarantee that about he rest of the development group. I do however highly doubt that it would be the case, but that is just speculation from my part.

There are instructions on how to install our mod at the very least, but maybe that's not what you were referring to.

Also, if you're really interested about it, I could double check where exactly the main characters name is from. And sadly I have to say that she very much most likely isn't named after you :)

If you have anything else on your mind, feel free to either post here or contact me directly through PM or my mail: Henriknik(at)hotmail.com

It doesnt really matter to me :) I just think its funny, I had the same idea a 1/2 year ago, and the character is named after my name.

Hell of a coincidence dont you think :).

I dont care if my map was used as inspiration, as far as im concerned, ideas are a dime a million, and i have plenty of ideas and thoughts that never stop :).

It just takes time to make a game, and I need time to make money in the real world to support myself. Otherwise I would sit at home all day making games with my ideas, like tower defense in 1st person.
But im not trying to be ***, Just trying to figure out if im crazy? or if my map was inspirational, for someone.