Rohan was the territory of the Rohirrim, a people of herdsmen and farmers on the northern borders of Gondor in Middle-earth. Well-known for their horses and cavalry, they were Gondor's most important ally. 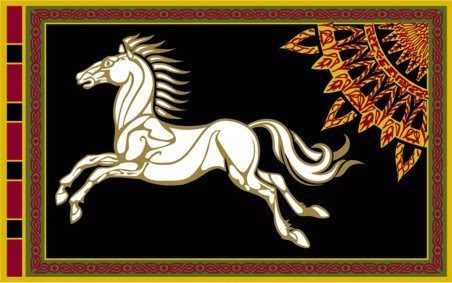 Rohan, originally Rochand or Rochann, was a kingdom of Men, located in the land once called Calenardhon, situated in the great vale between the Misty Mountains and the White Mountains (Ered Nimrais). The land of Rohan extended from the fords of the river Isen in the west, up to the shores of Anduin the great in the east. The forest of Fangorn lay within the borders of Rohan, and Lorien lay to the north of the river Limlight. The land was known as Rohan to the Men of Gondor, and its people theRohirrim, meaning 'the Horse-lords', but the people of Rohan called themselves the Eorlingas, sons of Eorl the Young, firstKing of Rohan, as the land of Calenardhon was given in gift to Eorl and his people by Cirion, Steward of Gondor, in thanks for their service to Gondor in battle against the Balchoth. Eorl, the first king, swore an oath of friendship, at need or at call, to the Lords of Gondor, and thus the Rohirrim became the greatest allies of the Men of Gondor throughout the Third Age and beyond. 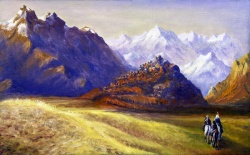 Rohan's first capital was at Aldburg in the Folde, until King Eorl the Young or his son Brego built Edoras. It was Rohan's only real city, and held the Golden Hall of Meduseld.

The city was built on a hill in Harrowdale, a valley of the White Mountains which lay under the great mountain Starkhorn. The river Snowbourn flowed past Edoras on its way west towards theEntwash. Edoras was encircled by a wall, and a dike dug around the hill. It had a spring whose water flowed in a channel along the main road.Outside, there was the Barrowfield, with the tombs of the Rulers of Rohan arrayed in two lines by the War of the Ring. Simbelmyne grew there. A rutted road led from the city past Snowbourn. 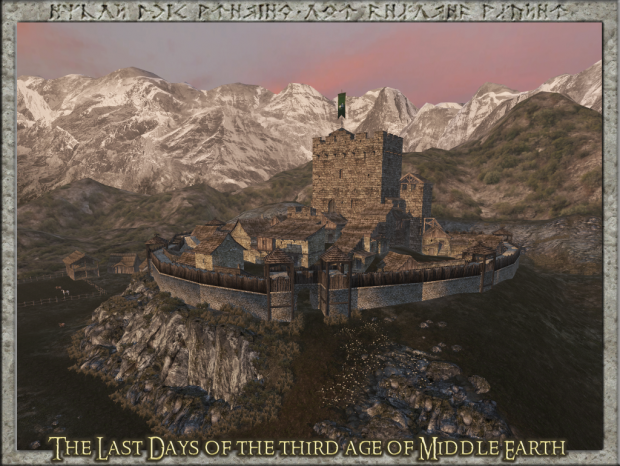 Aldburg was one of the oldest towns in Rohan. Aldburg was built by Eorl in the region known as the Folde, east of Edoras. The Kings of Rohan removed to Edoras after Brego, son of Eorl, completed the Golden Hall, but many centuries later there were still nobles living there, including Éomer, son of Éomund. Even though Aldburg was in the King's Lands as part of the Folde it was the location of the muster of the East-mark as it was the most convenient location. At the time of the War of the Ring, it was the home of King Théoden's nephew Éomer, who was Third Marshal of the Riddermark.

The Hornburg was a great Gondorian fortress situated on the Hornrock, connected to the Deeping Wall. Later it came into the possession of Rohan and the master of Westfold dwelt there. It guarded Helm's Deep nestled in the northeastern White Mountains. Helm Hammerhand sought refuge there against the Dunlendings. It was named Hornburg because a horn shouted from its tower, could be heard in the whole Deep.During the War of the Ring it was commanded by Gamling the Old. It was said among the Rohirrim that "no enemy has yet taken the Hornburg", and it was considered the strongest point in Rohan, stronger than Edoras and Dunharrow. 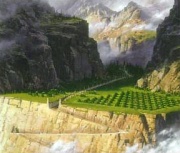 Dunharrow was a refuge of the Rohirrim hidden in the White Mountains south of Edoras and fortified against attack. Dunharrow was a clifftop overlooking Harrowdale, the valley of the river Snowbourn. In order to reach the refuge, a winding path had to be used, known as the Stair of the Hold leading to the "Firienfeld", a large grassy area for the encampment of soldiers and refuge-seekers. Large carved stones marked the entrance to the Dimholt, a natural amphitheater, which led into the Paths of the Dead.

The military of the Rohirrim are commanded by Marshals. The First Marshal of the Riddermark is the highest military rank and commanded the Muster of Edoras: Riders of the capital Edoras and the surrounding lands, including the King's Lands and Harrowdale.

The armies of Rohan are almost exclusively cavalry, divided into irregular units termed éoreds. Rohan's foot-men armies were more of a very well trained militia called upon in times of war, the militia of Rohan wielded wooden shields of all sizes and used four weapons: longswords, short bows, axes, and longspears. The actual standing infantry army was relatively small with the professional career limited to the royal bodyguard of Edoras. Royal Guard of Rohan of Edoras were the elite soldiers of Rohan and fought on foot as well as on their horses, they have heavy plate-armour and wield large round wooden shields, their weapons were mostly the longspears which were used for thrusting or throwing at their enemies, they also carried longswords for close combat in the event that they lost their spear. Their powerful cavalry (the Rohirrim) could cut through almost any infantry lines and cavalry units and turn the tide of battle. The warriors of Rohan used the same weapons as their footmen counterparts when on horseback.