I wanted to stay true to the original ROBOTRON's lineup of enemies, but updating their appearance and behavior slightly to fit our story. In the original game, the 'Hulk' first appears in the 2nd wave and you quickly learn it is a force to be reckoned with. First, it is indestructible. Your shots only slow it's progress. And 2nd, it relentlessly pursues the humans on the screens and kills them!

There wasn't much to improve upon for our version of the Hulk, called the 'Hunter'. It was already pretty scary and I liked the unstoppable quality to its pursuit of the humans, so I mostly just updated his graphics with some not so subtle touches that helped reinforce his ultimate purpose. I imagined his size and shape made him a perfect walking billboard, or better yet, a video screen. So, in keeping with our backstory, we have some 'controversial' propaganda that the 'Hunter' bot is going to be broadcasting across his torso. You'll just have to buy the game to see what that looks like!

As I mentioned in a previous article, I was able to get a decompile of Eugene Jarvis' (the creator of the original Robotron 2084) source code in assembly language. In it I discovered that the Hulk uses a table of the locations of the humans on screen to choose the closest one to their position and to lock onto it and chase it. I implemented my own version of this behavior, allowing the Hunter's to search through the Actor system and find the closest Human actor and if it was not already chosen by another Hunter, to mark it as theirs! Then they chased it down until they killed it or it was saved by the Player.

An interesting artifact of the Hunter's indestructible quality is that they stop the Player's shots, thereby acting as walking shields for the other bots on screen. This creates some interesting situations in the game where other Baddies can fire at the Player from behind a Hunter, but you are unable to hit them because of the big walking shields.

Watch the short clip below to see all of their behaviors in action...

Another detail we retained from the original game is the Hulks could walk over and remove the 'Electrodes' that littered the screen as obstacles to be avoided by the Player. COVIDTRON 2020's version of the static but deadly 'Electrodes' is the equally dangerous floating 'propaganda' signs that litter the arena. Thankfully the 'Hunter' bot destroys all propaganda he comes in contact with.

Below is a snippet of the 538 lines of game code that I wrote to bring our 'Hunter' bot to life. 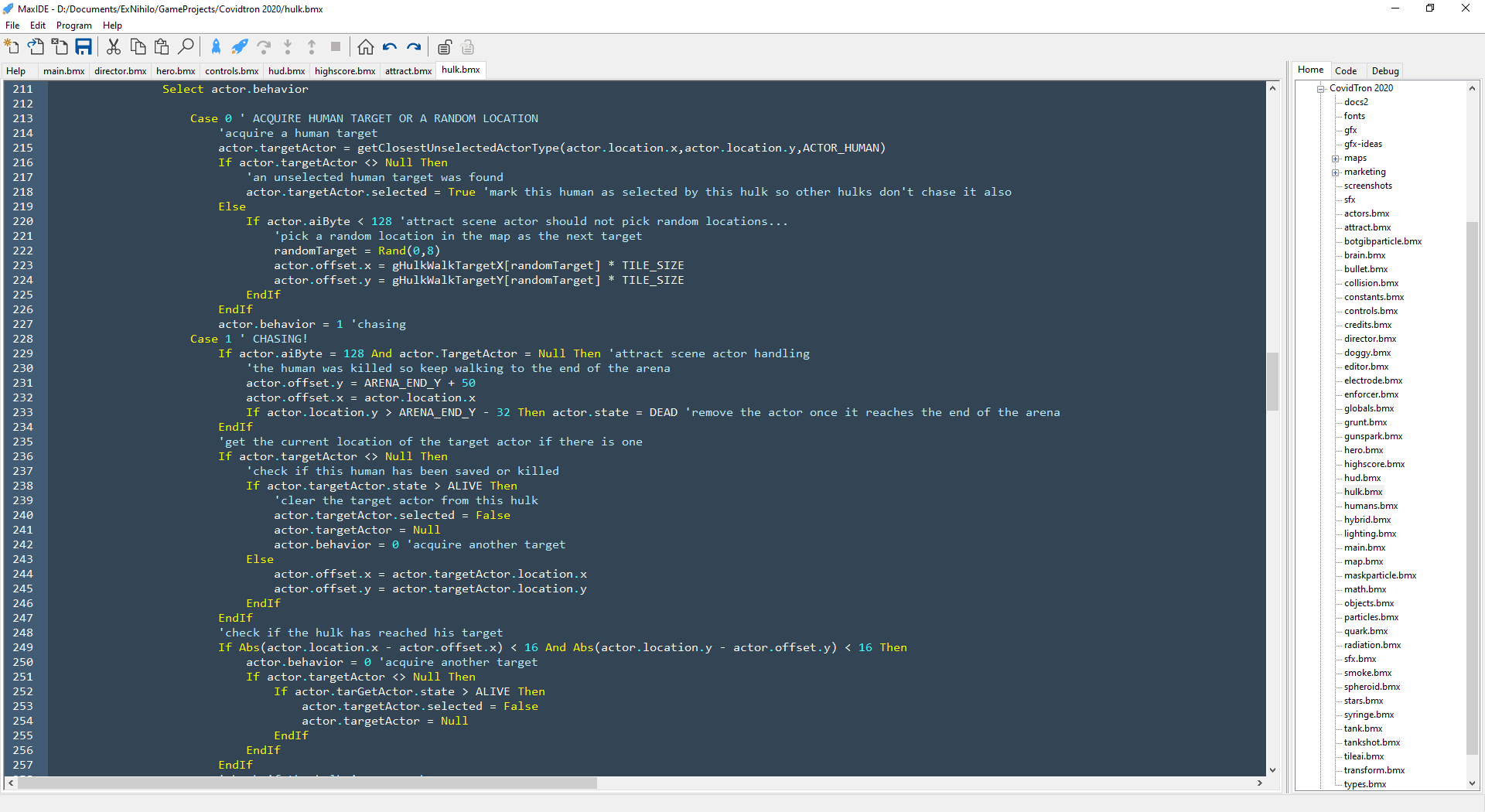 And here is the function that the Hunter bot uses to lock onto the closest Human actor on the screen... 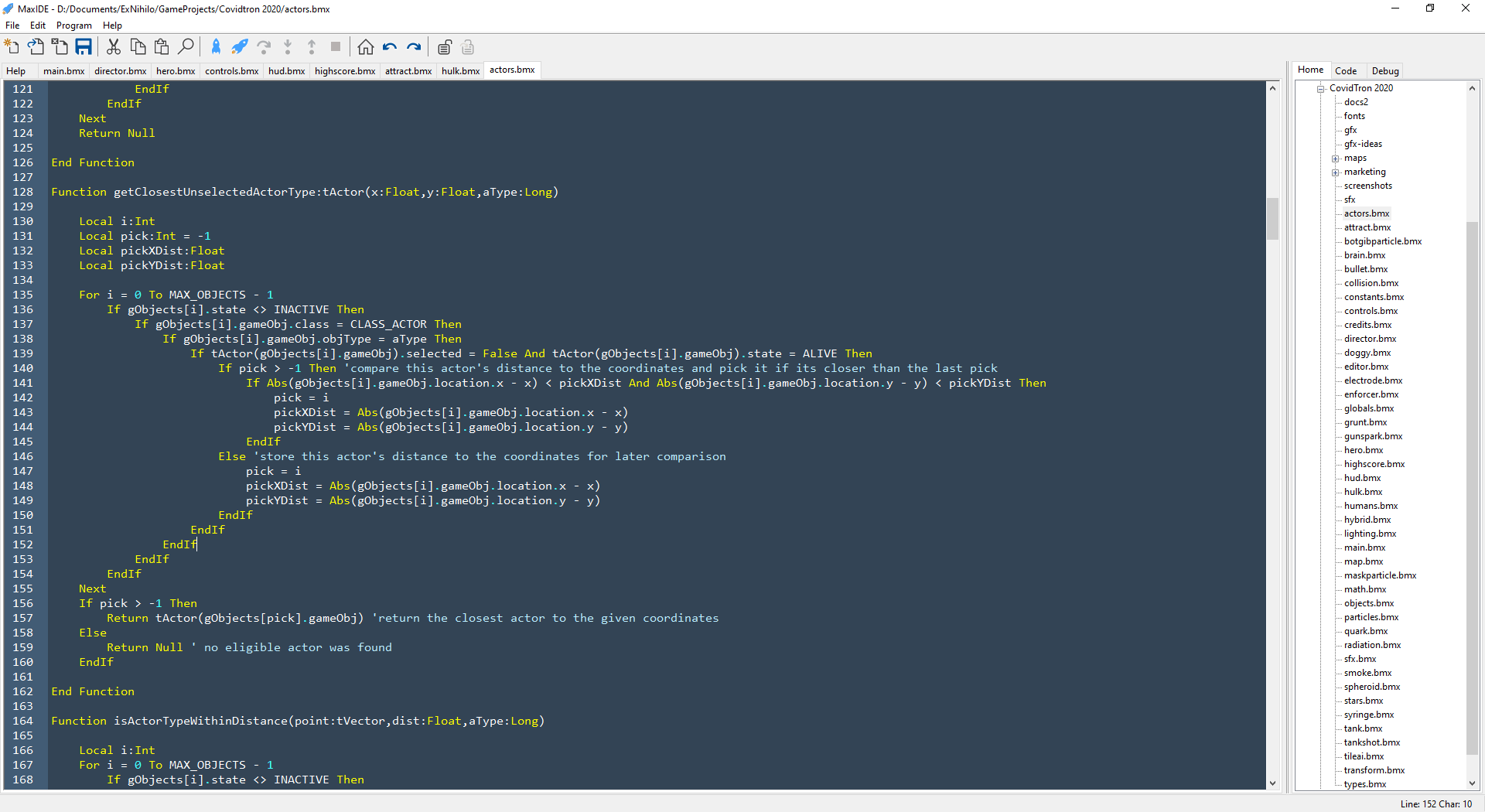 Well, that about wraps up the spotlight on the 'Hunter' bot, a formidable and relentless foe of the Humans and the Player in our latest video game.

I hope you'll check back regularly as we continue to spotlight the baddies from our new twin-stick shooter, COVIDTRON 2020!

Check out our promotional / sales website for COVIDTRON 2020 here: Covidtron2020.com