This update contains a whole new Civilization, called The Black Banner, some corrections and also finally integrates HighwayHoss' HEFT-package, which comes with a lot of tweaks and work in areas previously untouched by the mod. This is indeed starting to live up to its name as a Total Conversion. Also integrated, is the Better Landscape, finally, which makes the game look better on your screen than in my screenshots!

Now get off that boring summer beach and start playing Fairy Tale instead. Enjoy!

In the beginning of the Fourth Millennium, in the Year of Namerl 3042, the Order of the Silver Dragon again stepped forward and broke away from the Noble Principality. The Order had existed as a secret cult for four hundred years; waiting and biding, smelling blood, watching for the opportunity of resurrection. Back in the Dark Ages of hardly recorded history, the Silver Dragon Order had conquered the World, burned it, destroyed it, pillaged it, and its name had been synonymous with warfare and fear; the World had trembled at the whisper of its name. And now, once again, the Black Banner was fluttering in the savage Western winds and the Silver Dragon was reborn out of the ashes of the old and secluded. Out in the light he once again flew, the Silver Dragon, bearing evil, darkness and fear once again.

The smoke from burning villages and farms was thickening the air in the Principality western provinces as the advance guards stood helplessly watching as the armies of an unknown enemy were approaching. Scouts and skirmishers were sent out; word was sent to Ost Weld and the population began its evacuation; the commanders knew not their enemy, but had intelligence of terrible raids on the western frontier towns where whole populations had been slaughtered.

The scouts returned, worried and pale-faced, for they had seen the enemy and they knew who he was. Masses of men, a hundred thousand, all dressed in black were marching on the western frontiers; in good order, under impeccable discipline, silent and determined. In front of their lines flew the banner that had been forbidden in the Principality for four hundred years, the banner that was spoken of only in whispers - the Black Banner with the Silver Dragon. Many a noble Principality knight trembled when he heard who the new enemy was. The Order of the Silver Dragon had been reborn and was on the march - the Silver Dragon, a name that echoed in history with shame and fear in all the Princpality lands. Yes, The Black Banner had come again.

The Black Banner is not a nation in the usual sense. It is rather a confederation made up of the followers of the secret Cult of the Silver Dragon, people who emigrated to the land between the Twin Lakes and the Angleeye Pass. The Silver Dragon Order had once been a strong religion in the world, but had been responsible for a great war and had thereafter existed as a secret cult in all the nations of the Known World for four hundred years. When its numbers grew and its influence again became strong, the followers decided to form their own state in opposition to the newly formed Empire and in alliance with Zuur and the Demon King. The Black Banner takes their military discipline from the Principality and forms their armies on eastern systems. 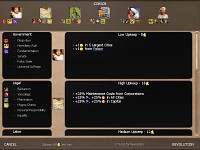 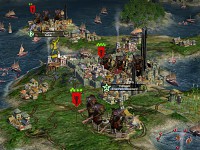