Hey everyone!
Welcome to Renegade X's February 2010 news update. We've got some exciting news for you all. Renegade X is the Command & Conquer mod for Unreal Tournament 3, and our current version, the 0.5 beta, is available for download here: Renegade-x.com

Today's update will include the following items:

Totem Arts would like to thank the fans for helping us win 5th in ModDB's annual Mod of the Year contest. It truly means a lot to us to see our mod flourish and be recognized in the vast modding community, and we would not be able to do that without our fans. Thank you all for voting for Renegade X, and with more and more downloads everyday and an active playerbase, we hope C&C mode finally gets the recognition it has truly sewn for itself.

Renegade X was also nominated for Best Multiplayer Mod of 2009, and we'd like to congratulate Mech Warriors: Living Legends for Crysis for winning first place in both of our categories.

This is our second mod of the year award (last year, we got #3 Best Unreleased Mod). Best indie game of 2010, bring it on!

Renegade X wins #2 Best Vehicle Set for the Make Something Unreal Contest!
Although the news is a couple weeks old, Renegade X scored 2nd Best Vehicle Set in Epic Game's Make Something Unreal Contest. We'd like to thank Epic games for this award, and EA has given Epic the 'ok' for us to be awarded our prize money. We look forward to getting that soon, a shout out to Aaron Kaufman, Steve Polge, and Dana Cowley for helping us make this happen :wink:

Patch for 0.5 coming soon!
Renegade X has a lot of big surprises up its sleeve that you'll be hearing about in the next couple months. Today, we'd like to announce that Renegade X is working on a patch for 0.5, for the purpose of adding content (new textures, character models, animations, and more) and fixing bugs. We've fixed the vast majority of the bugs over the past few months, and 0.5 is definitely far more polished than our initial release, but there are still a few that need removal. We thank you all for being patient with us.

There's no set release date just yet, as the team has been busy porting this mod to the UDK (which will officially make Renegade X a free standalone game). We'll be sure to shed light on both the patch, and the UDK version, as things progress.

Renegade X now has an auto-updater, which will allow us to seed updates straight to the client as soon as he/she loads the Renegade X frontend server-client.


Volt Autorifle
Person A: And what's Mobius without a volt autorifle?
Person B: A tiberium scientist, very intelligent and very useful to the GDI
Person A: Oh... that's right.

But he's armed with one anyway! How kickass is that? 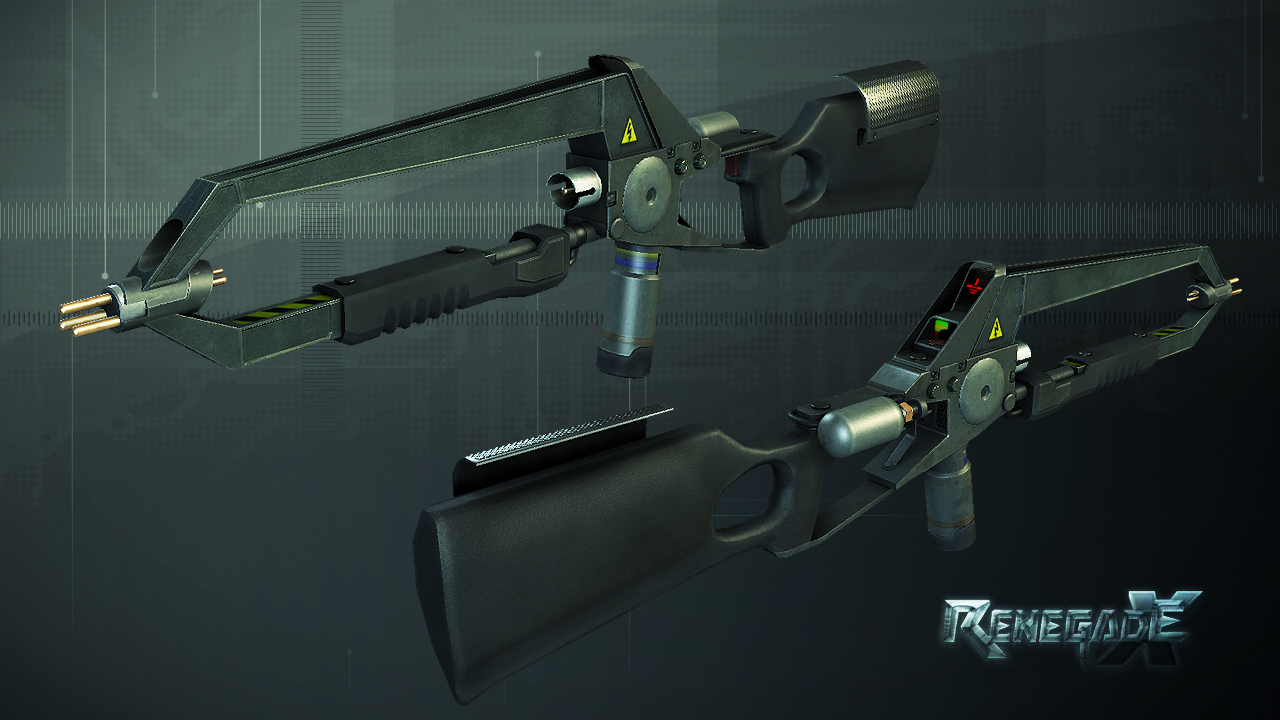 Nuclear Strike animation teaser
Currently, Renegade X is using Unreal Tournament 3's redeemer blast as a nuclear explosion for the Brotherhood of Nod's nuclear strike beacon. Our new nuke is almost ready, and will be available in the next patch. Below is a short teaser.

New tutorials for Renegade X's maps and mods tools
The team has updated our Maps and Mods forum section with two new tutorials. The Renegade X map and mod tools comes with the 0.5 download.

And with UT3's resource downloader, any server hosting a new map or mod will automatically distribute the custom content to the players. Sharing your work made easy.

So what are you waiting for? Get mapping!


MP-Gaming community server!
The MP-Gaming servers, based in Amsterdam, are the most popular Renegade X servers, and rightly so. They're great group of people with much to contribute to our mod, including the current IRC bot, and many mutators. It includes:

MP-Gaming has also announced that all custom maps made for Renegade X will be hosted on their servers. The perfect way to get your new maps played by a large audience.

For those who like competition, music, taunts, and custom content, the MP-Gaming servers are right for you.

Renegade X Aircrafts Mod!
Renegade X has yet to officially add air units to the mod, and they will be added in due time. Until then, Katzsmiles and his team have been developing the Renegade X: Aircrafts Mod. This could very well be the first mod for Renegade X to make a release in the near future. It will include the standard aircraft from C&C Renegade, such as the Orca, ApachÃ¨, and Chinook helicopter. With UT3's aircraft physics, I'm sure it'll be a blast to play.

All community mods for Renegade X will be supported with tutorials, publication, and mildly helped, by your brothers at Totem Arts.

X-Mountain
Renegade X's first community map has been released! X-Mountain is a non-defense map with an interesting layout and excellent gameplay, created by Kenz3001. It is now available on the MP-Gaming server. Renegadex.game-maps.net

Media Platoon is looking for Recruits!
If you are a member of a C&C or UT community website, or if you are a prominent poster on a C&C or UT forum, this your way to contribute to the mod. Basically, all members of the Media team would contribute whenever we have a major Media Release or announcement: we would supply you with the updates, and you would go to your designated website or forum to post the news.

Dev Night! February 13th and 14th
0.5's first Dev Night event is coming soon to a PC near you!

This is your chance to play with the developers of Renegade X, and other members of the community. You could expect a great deal of teamwork as well. All the information you need can be found below.

Both events will start at 3:00pm EST (Eastern Standard Time).

Come on to whatever server is populated at the right time :) See you there!

That's all for now folks. This was a huge update, but every bit of information was absolutely necessary. Stay tuned, and keep your eyes open for more updates and surprises in the near future!

You broskis are doing a great job. This is a really brotacular update.

That nuke looks orgasmic. I think we need some sort of Self Sustained Nuclear Reaction to that. Like a big ball and then explodes into a mushroom cloud haha

Well done for making it into 5th with the mod of the year RenX! :D

Also, congrats for making such an awesome and well loved mod. <3

Cant wait for a solid online community and the stand-alone version!

Mobius looks like a stereotypical scientist: a little on the pauchy side, too busy to shave. But a pretty beastly scar.

I Cant wait to be able to try this game....
I bought UT3 when it was full price and brand new (about 80$) JUST FOR THIS GAME then it would just never happen to be available....
now UT3 could have been a lot cheaper to me to try this game only( i dont play ut3)
and the game simply doesnt work!!!I CANT PLAY IT i tried but ren-x will open ut3 then just never get in the game...and there is always nuthin but 2 or 3 players on the game servers list
HOW DO I GET TO PLAY AND WHERE CAN I FIND A SERVER WITH MORE THAN 3 PERSON PLAYING???help anyone
got no patience to try this