Okay, to begin. There was no July update, for multiple reasons. For this month's update, we have some imagery to show of buildings created, and even the Rhino APC!

Here are some screencaps:

And finally, the Rhino APC 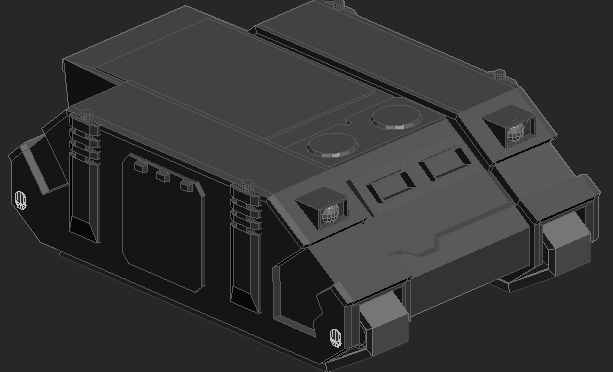 
Now, the team has had some major setbacks, including the pile-on of homework, the destruction of some people's computers during heavy storms, and illness, and we're still looking for more members so we can get production up. However, the current team is still dedicated to the mod, and hopefully we'll get faster and faster in production.

The Roster for this month is as follows:

Map-creation:
1: The current version of Never_Changes.mix is to be completed
2: Other Renegade maps are to be 'converted' into Ren40k maps.

Rigging:
1: The Las-weapons and Plasma Weapons to be rigged

So hopefully this will work out.

By the way, our job applications are still open!
3D Modelers
Level Designers

For applicants, both jobs require a portfolio of the work, knowledge of the applications required for them, and a passion for the Warhammer 40,000 universe is a big plus. Applications can be sent to:
contact@ren40k.net

[Thought for the Day: Step not from the path of the Emperor.]
Comments

Waht programm do you use to model? I may help you if i get it, and i'am currently searching to help anybody to improve my modeling skills.
And nice idea btw, looks great!

I am using 3D Studios Max, which is pretty expensive by the way.

Although Gmax is also acceptable, with the RenX plugin. That's how we convert the final meshes to be rigged.

Link? Tutorial? Gotta work out, then i may help you.

Ftp.westwood.com
This is for RenX.

RenX is a Gmax plugin. Looking forward to see some work =]