Much more detail to generated religions, player movement around cities, and the first introduction of generated currencies.

Posted by UltimaRatioRegum on Oct 4th, 2014

I've spent most of this week URRing, which has been a nice break. Hoping to start full-time year at the end of this month, or possibly the very start of next month, depending on how fast I'm able to move house. In the mean time I've been working partly this week on finishing off religions for this next release, but mostly on cities. As a whole I'm past the 3/4 mark on 0.6 (after which no release will ever be this large) and there isn't that much which needs finishing off. The largest part of what still needs doing is city centre generation and military district generation which I haven't even touched yet, and then a large number of smaller things - improving market generation, finishing off hunter-gatherer settlements, a few issues with world/map generation, etc. Docks are going to be closed this release since they require integration with a number of other factors - the movement of ships, ships docking (so handling multi-tile "creatures"), departure/trading schedules, etc - so they will appear probably in 0.9, as I don't want to code part of them, leave it for half a year, and then come back and have to figure out how the hell it all works. Anyway, this week's stuff:

Firstly, I added a lot of variation to religions based on the discussions in the previous blog post. Religions now have four special factors, and some religions will have none, one, or all four of these factors. These are a unique feature (festival, pilgrimage, animal sacrifice, etc), an exclusion (a particular type of weapon they consider heretical and cannot be used if you worship them), the punishment for leaving that religion (none, excommunication, open hostility), and then a list of other religions, if any, that they consider heretical, and whose believers they are hostile to. Here's an example from the in-game encyclopedia: 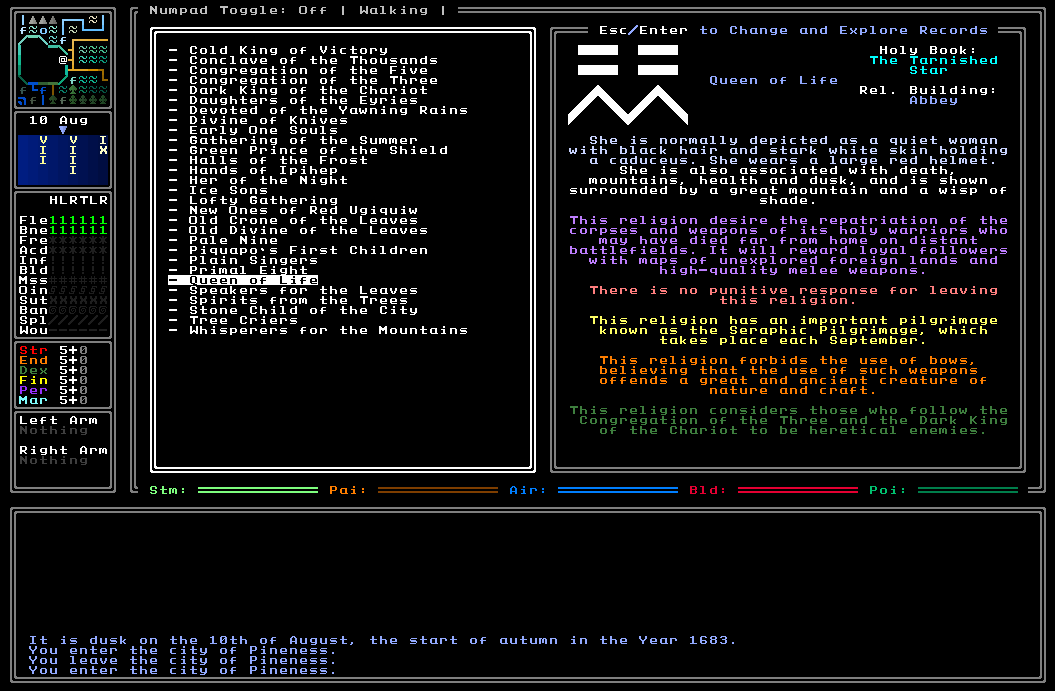 Aside from that, the major thing I've worked on this week is the city exploration screen. If you're on the world map and you move into a city, the screen changes from this: 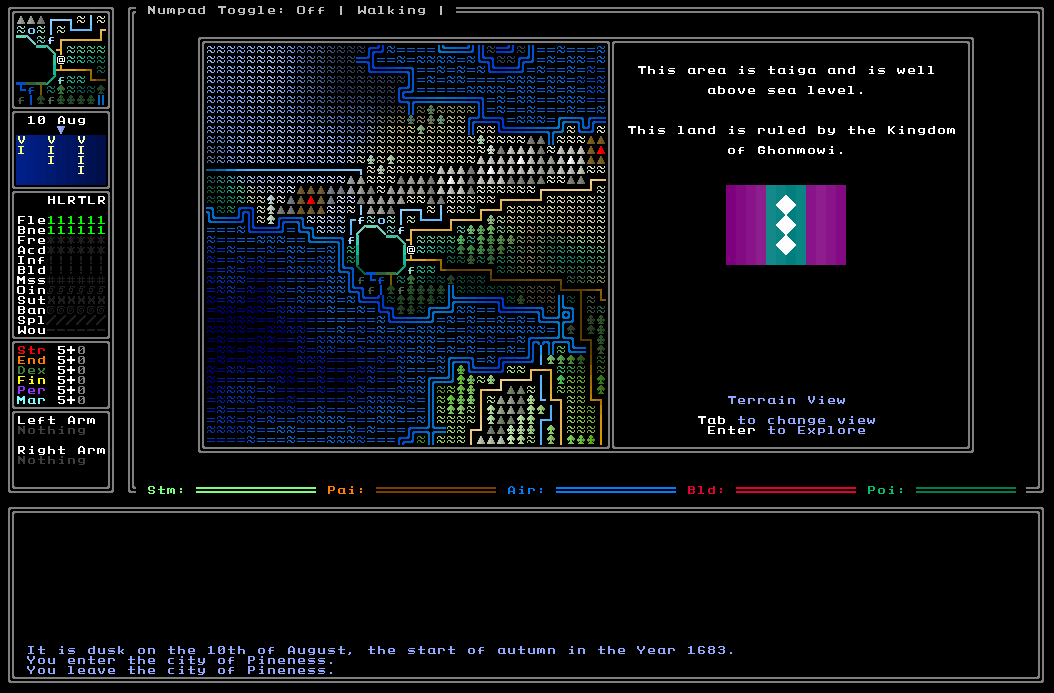 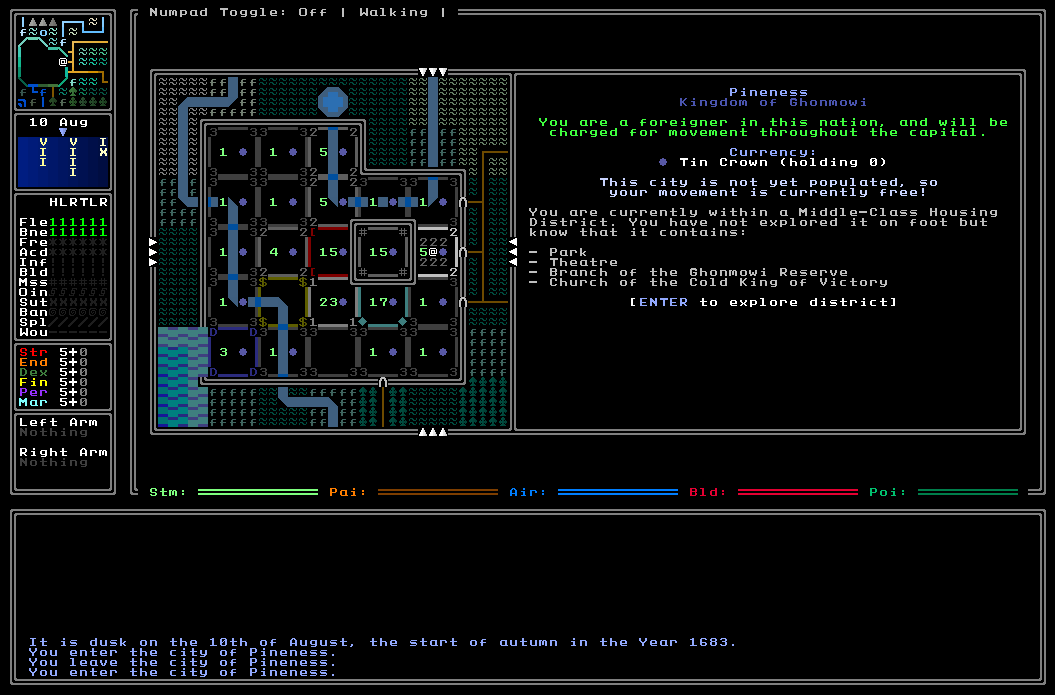 ...which is quite a complex screen when you first see it, but there's a lot of information that needs to be stuffed in there without compromising on clarity (as much as possible). It displays the nature of each district (the characters in the corners, [, $, 1, etc), whether you are currently in it (displayed by a lighter shading, the @ symbol, and the arrows on the edge of the screen), and most importantly, the cost for entering that district. This is the first aspect of the strategy layer of the game and the use of the player's time and resources. The cost is shown in this picture in the nation's currency - some nations only have a single currency, whilst others have two levels of currency like most real-world coinages. The "this city is not populated" message will only be there until coinage and NPCs are implemented, of course, but I thought it was important to be clear for 0.6 on this point. 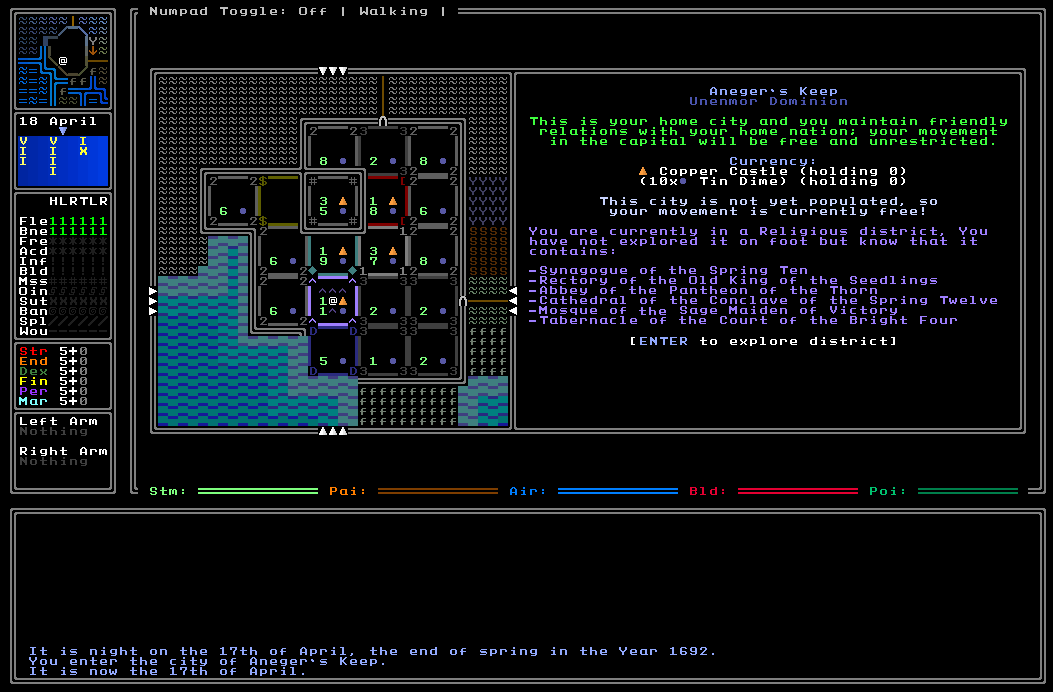 The sidebar display a load of information about the city. The top text will describe your relationship with that nation, and therefore whether you are given discounts or charged extra for movement, and below that how much of the appropriate currency you have. Movement within your capital is totally free, however, as is any nation you are closely allied with. Then it tells you what district you're in, and lists all the buildings you know of within that district. All districts within your home city will start explored, whilst you will be able to purchase maps to other cities, or ask for directions to specific buildings when exploring abroad. For the next release or two currencies are not implemented so your movement will be free, but in either 0.8 or 0.9 currencies, and currency exchanges, will appear. I'm looking forward to generating the images for the currencies too, as there's a very cool selection of possible coins in there.

- All castles, graveyards, crypts (below either graveyards or cathedrals in theocratic nations), taverns, arenas, jails, theatres and asylums now have full (and pretty awesome) name generators. Fancy visiting Blackwish Bastion, Whispering Orchard Necropolis, the Sepulcher of the Golden Bones, the Tankard and Dragon, Boneblade Fighting Pit, Slate Palisade Lockup, the Theatre of the Choleric Faces, or the Tranquil Gate Sanitarium?

- Some cities which don't have enough roads going into them now gain extra gates so that you can always access them from various directions, and these are shown on the world map.

- Player stats have been updated to reflect the upcoming combat mechanics - you now possess strength, dexterity, endurance, perception, finesse, and marksmanship, two of which will determine your skill with each of the six types of weapon (slashing, long, heavy, short, bows/crossbows, and gunpowder).

- Marshland is fully implemented and hunter-gatherer settlements, towns and city districts all generate correctly on them, allowing for pools of marsh water without jeopardizing pathfinding.

- An early draft of religion-spread mechanics has been implemented; any civ that believes in "Religious Freedom" as their policy will have the religions from all neighbouring civilizations reflected, including those they neighbour with a colony, rather than their main body of land. This then determines which buildings spawn in religious districts, and they are described in the city view screen appropriately - "a Stupa of the Six of the Leaves", "a Church of Her of the Mountain", "a Chapel of The Thousand Divines", etc etc.

- I fixed a bug causing towns to generate large circles of road in the middle of the ocean.

You can keep up to date on my devblog, Facebook page, or Twitter feed. The devblog is updated weekly on Saturdays (or sometimes Sundays), Facebook a few times a week, and the Twitter roughly daily. Stay tuned...

Cheers! It feels good to be getting back into the swing of things and getting some serious progress done :)

It's amazing to see the various parts of random generation intertwine and form a lively whole like this. The way everything blends together feels much better than even in DF :)

Why do crossbows share their skill with bows instead of guns, though? Both crossbows and gunpowder weapons are pretty much point and click in usage and fast to learn, while bows are unique and take years to use effectively. Is there any special reason for this?

Awesome, thanks for the message! I'm actually giving a talk at the "ProcJam" (https://itch.io/jam/procjam) in a month and the subject of my talk is going to be, effectively, what you've just mentioned - having all the parts and levels of proc gen intertwine in an appropriate and interesting way :). Crossbows, you raise a good point, but it is to distinguish between the "archery" weapons and the "gunpowder" weapons. You're totally right, but it's a slight gameplay-over-realism decision.

When the world is finished and gameplay can actually be added!

No need to "convert" me. I am going to play it as soon as you got a beta ready.

We're in alpha for only about one more year (though you're welcome to download it now from the site!), and I'll probably consider it a beta once the world generation, and NPCs, are fully present. Thanks for the enthusiasm, btw :)