In this post I go through some of the fighting mechanics of Prisonscape.

In the last post I talked about statistics, skills and jobs in Prisonscape. In this post, I will go through some of the fighting mechanics of Prisonscape. Since this post became longer than I thought, I will divide it into two parts: in the first one, we'll go through regular and intelligence based attacks and combo hits. In the next part we'll go through weapons and drugs and how they can be used in fights. 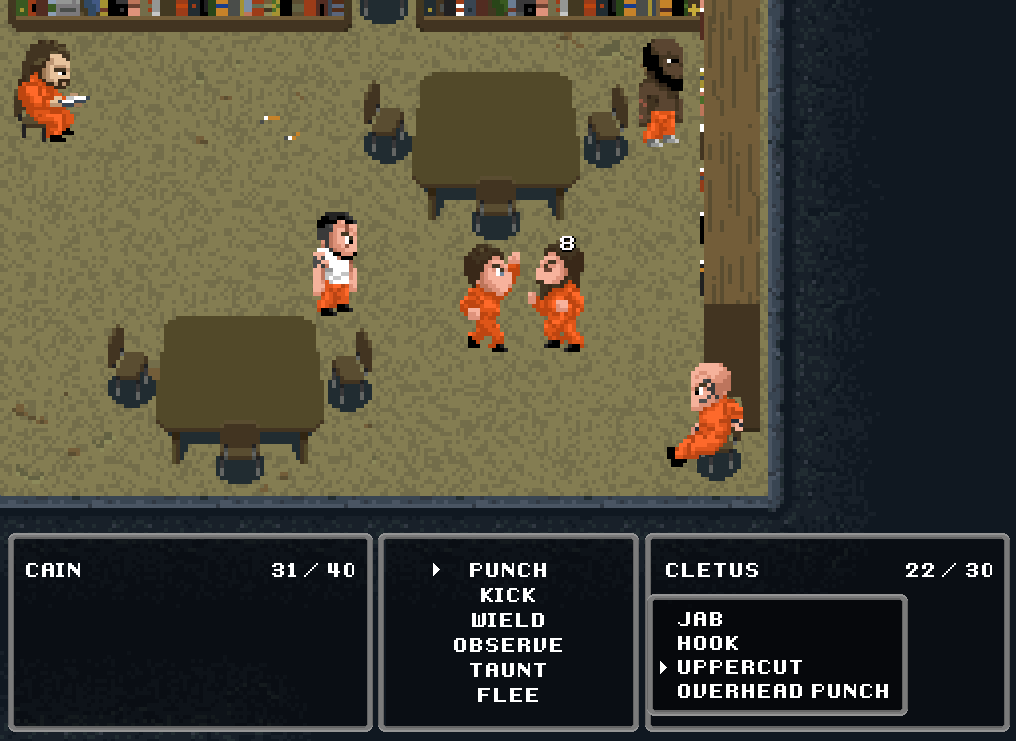 The new battle UI looks - no more blue boxes! This is still very much work in progress, though.

It is very difficult to avoid fighting in prison, mostly because they are filled with violent criminals. This is the case in Prisonscape also - sometimes you just have to fight. Sometimes you'll do it for reputation, sometimes to gain leverage over other inmate(s) and sometimes just for the kick of it. Starting fights is fairly straightforward; usually simply insulting your fellow inmates is enough to start a rumble. You can even do it with the guards (but you really, really shouldn't)! But all fights come at a price - sometimes you get beat up badly and have to go to the infirmary. Sometimes you get caught by the guards and are sent to the hole. If the player is very aggressive, he'll start getting negative reputation with other inmates for being a bully, so you should pick your fights very carefully.

Fighting is based on the stats and skills of the player. Agility determines your hit accuracy with attacks such as kicks and punches, and strength is the statistic that is used when you try to overpower your enemy by simply being stronger. Fighting is the core skill which can be trained on your own, with a trainer or by just fighting. In the beginning you only have few basic attacks, but as your skill goes up you get more powerful attacks which also have other effects on your enemies. Each different attack type has a speed which determines how long you have to wait until you can attack again. For example, punches are fairly fast attack methods but pushing or tripping the enemy takes a longer time.

In addition to physical attacks, we have added attacks based on intelligence. With these attacks you can taunt your enemies, threat them or mock them or observe their fighting style and try to find a weak spot to attack to. Your enemies usually have a weakness for certain kind of attacks, and with your intelligence and observation skills you can find out more. For taunting attacks, you will use an intimidation skill that can also be trained alone, with a trainer or by just practicing these taunts in a fight. For observation you'll also use the regular fighting skill.

Once you get better at fighting, you will get combo attacks. These multiattacks will give you an opportunity to damage your opponent severely by doing for example many punching attacks in a row (punch-punch-punch-uppercut). To make a succesful combo attack, the player must pass simple QTE combo meters a'la Mario & Luigi Superstar Saga. We know that the general commentary on QTE's is negative, but in Prisoscape it's mostly just good timing and we will not make them tedious or too difficult. Also, the difficulty of combo attacks goes down once you'll fighting skills go up.

Will people also show bleedings / wounds on the body in or after fights?
For example when the fight is ended, they will lie on the ground with blood on their face / body (punches / shivs), and also can they die from attacks? Shiving into their face and eyes comes in mind.