Generated all the door textures, fixed a load of bugs, and an estimated date for (finally!) 0.6's release.

Posted by UltimaRatioRegum on Nov 2nd, 2014

0.6 is nearly finished. There's very little left to do - I need to finish off the changes I want to make to market districts (shouldn't take more than a day, or two at the outside) and then it's onto bug fixes, glitches, edge cases, etc. Every city district except docks will be open for visiting this release - I'm leaving docks until we have NPCs and ships going around the world so that I can implement it all in one go. Equally, things like generating memorial statues and so on are going to be left for a little bit. For 0.6 there's quite a lot of small bugs that do need fixing, however, so given the volume of remaining work required - and the fact that for a lot of this month I still need to finish off my doctorate and present at two conferences, one of which is the ProcJam in London - I think a release around the middle/end of November is realistic, with the 0.7 release after that aimed at a much smaller timescale (two months instead of seven, say?). A lot of these bugs are minor fixes, but a few - a particularly stubborn issue with road generation, some strangeness involving territorial expansion, towns not generating properly 100% of the time when they're at the "end" of a road, etc - may take a little longer to divine the causes of.
.
Anyway, this week I've finished off the remaining procedural graphics for 0.6, which basically means doors. This took me about two days of graphical design. There's now over two dozen different designs for doors when you look them up - the rest of this brief entry is four different screenshots. Two are from feudal cities, one from a polar hunter-gatherer settlement, and one from a graveyard. Some buildings share the same door patterns, though most are distinct and varied. I've also put some finishing touches to city centers, fixed a couple of the easier bugs and some typos, written up a new guidebook entry on "Buildings" for this release, and also done a lot of lore writing/planning which will begin to slowly seep into the game in the coming few releases. Additionally this week I've been submitting a vast number of abstracts to game studies conferences in the coming year, so that's taken up a fair helping of my time too. Without further ado, here's the four screenshots - hope you like 'em, and see you next week. In the mean time, you can keep up to date on my devlog, Facebook page, or Twitter! 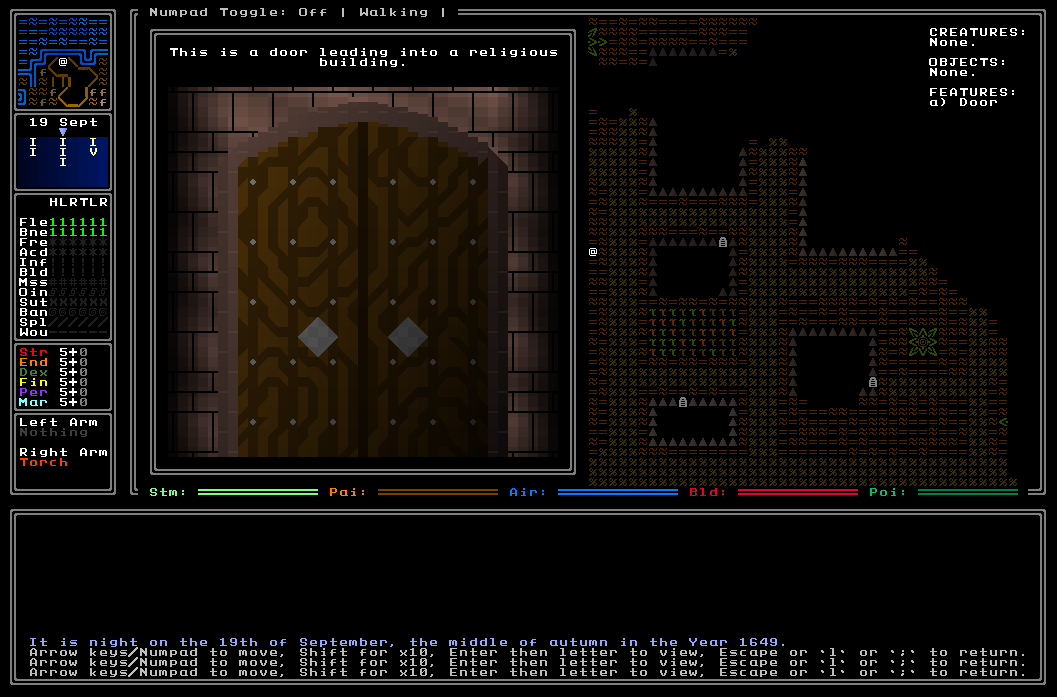 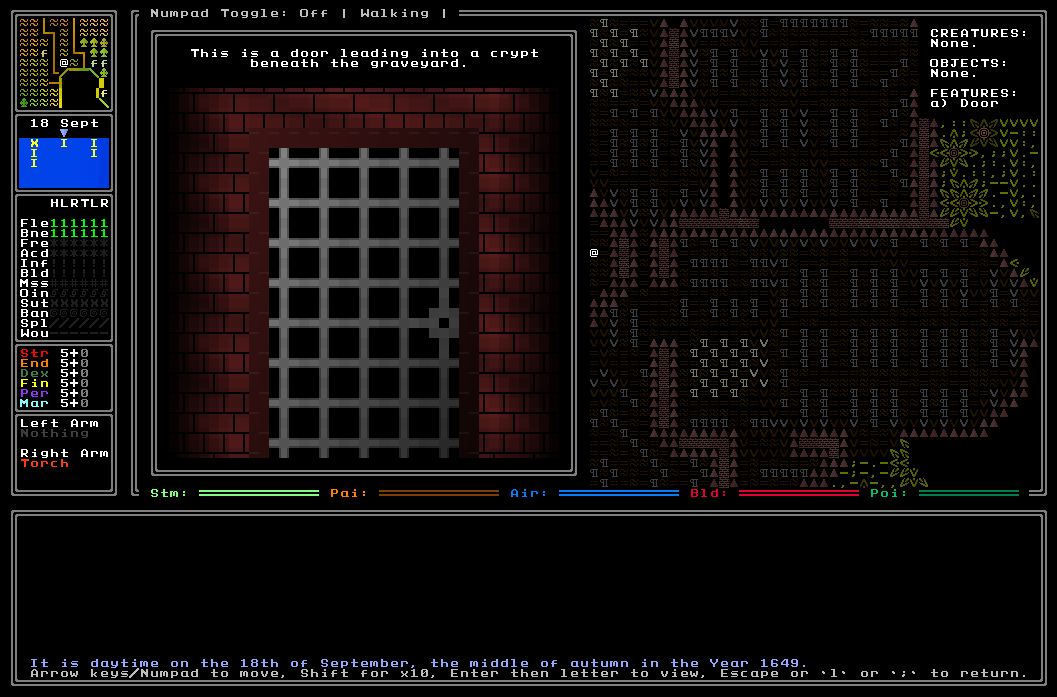 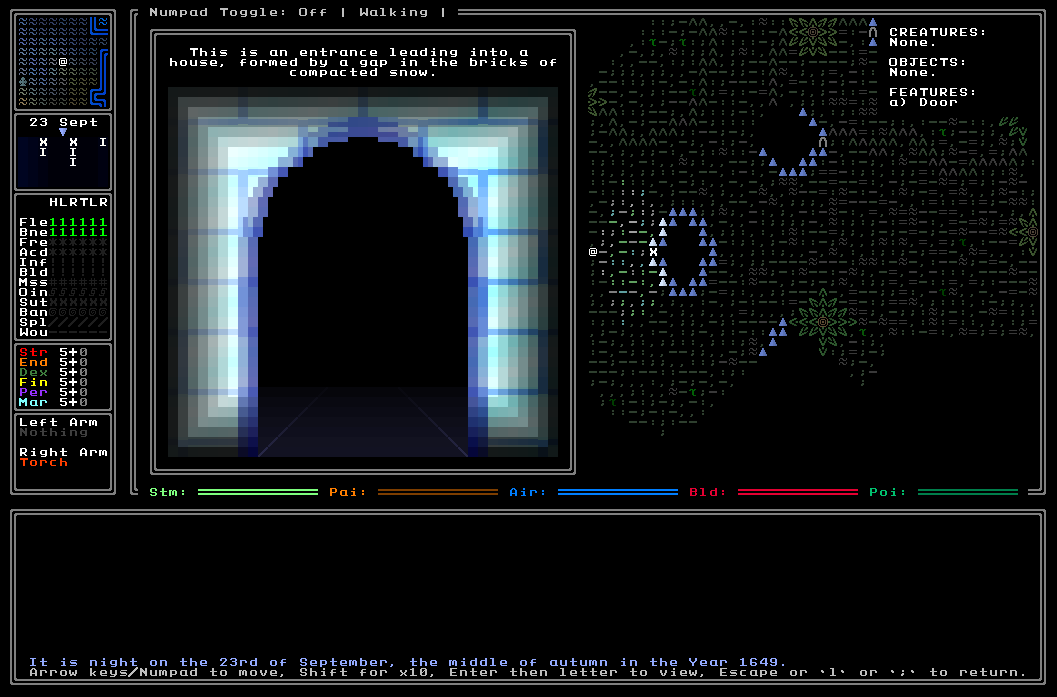 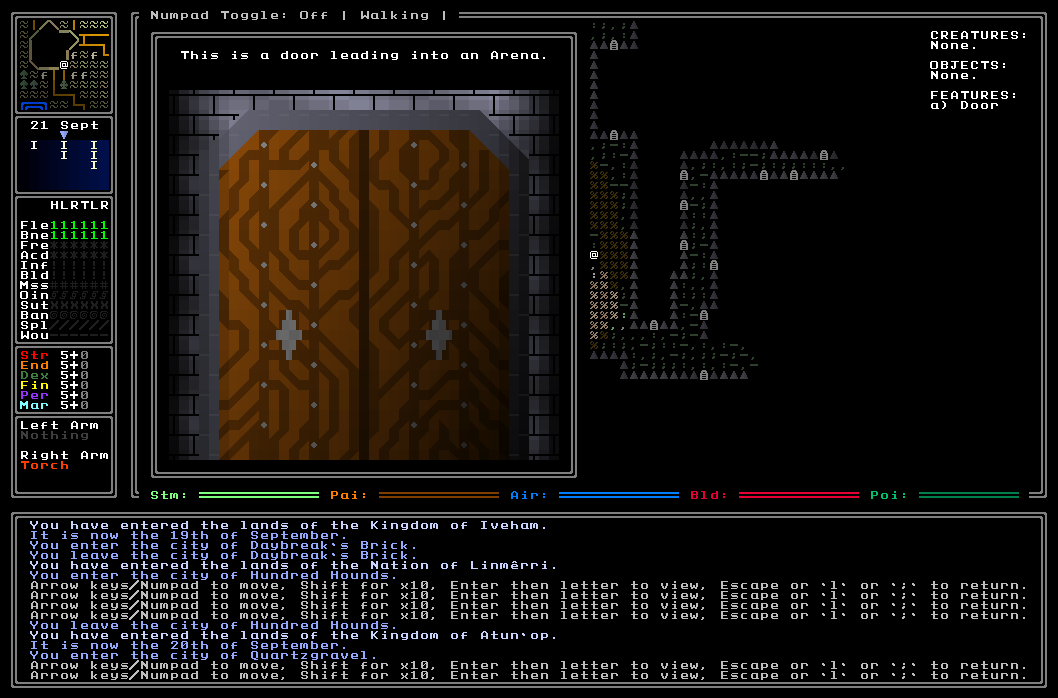 Great to see how its coming along. Keep up the outstanding work!

I am the one who knocks!

love this game. it reminds me of df with its ascii tileset. but this looks absolutely amazing.

Awesome, very glad you like the like the aesthetics! Everything in the game has a procedurally generated image when you [l]ook at it, and that'll include things like weapons/armour having generated styles for each civilization, to NPC faces, shop signs, terrain, etc etc...

nice. this sounds hardcore. must have been a nightmare to create