A detailed analysis of how URR can procedurally generate ANSI graphics for over a million items of clothing!

Posted by UltimaRatioRegum on Jun 13th, 2015

This week I've finished off procedural clothing generation for the richest individuals in feudal nations. The game can now create upper-body garments, lower-body garments, and boots, for each civilization. These different garments across a given civilization maintain a consistency of colours, a general consistency of size/aesthetic, and a consistency of whether the patterns etched into the clothing are circles, octagons, squares etc, based on the visual preference of the nation in question. Thus far these are only the "upper-class" clothing variations, but I think one can reasonably extrapolate how the others will look (which will come in a few weeks, I expect). Here's a summary of the three layers of clothing currently implemented - I'm also going to add gloves and cloaks this release, but haven't got around to them yet (since they're hardly a priority compared to implementing crowd mechanics before the UK IRDC in a fortnight's time!), but they'll probably reflect the coats of arms of important houses if upper-class cloaks, and then just have some appropriate patterns on for middle-class, and nothing special for lower-class. Anyway, onto the clothing of our procedurally-generated aristocrats:

There are currently seven "archetypes" for upper-body clothing, an example from each being shown below. I'm working on an eighth archetype but it is proving extremely challenging to make it look anything other than awful, so that one might not see the light of day. Regardless, each of these has three sub-archetypes, making for twenty-one high-level "clothing styles" at present, each of which then undergoes extensive randomness within that clothing style, meaning that even if the maximum number of feudal nations are present, there will still be several "unused" high-level clothing styles left over - so that'll do for now. 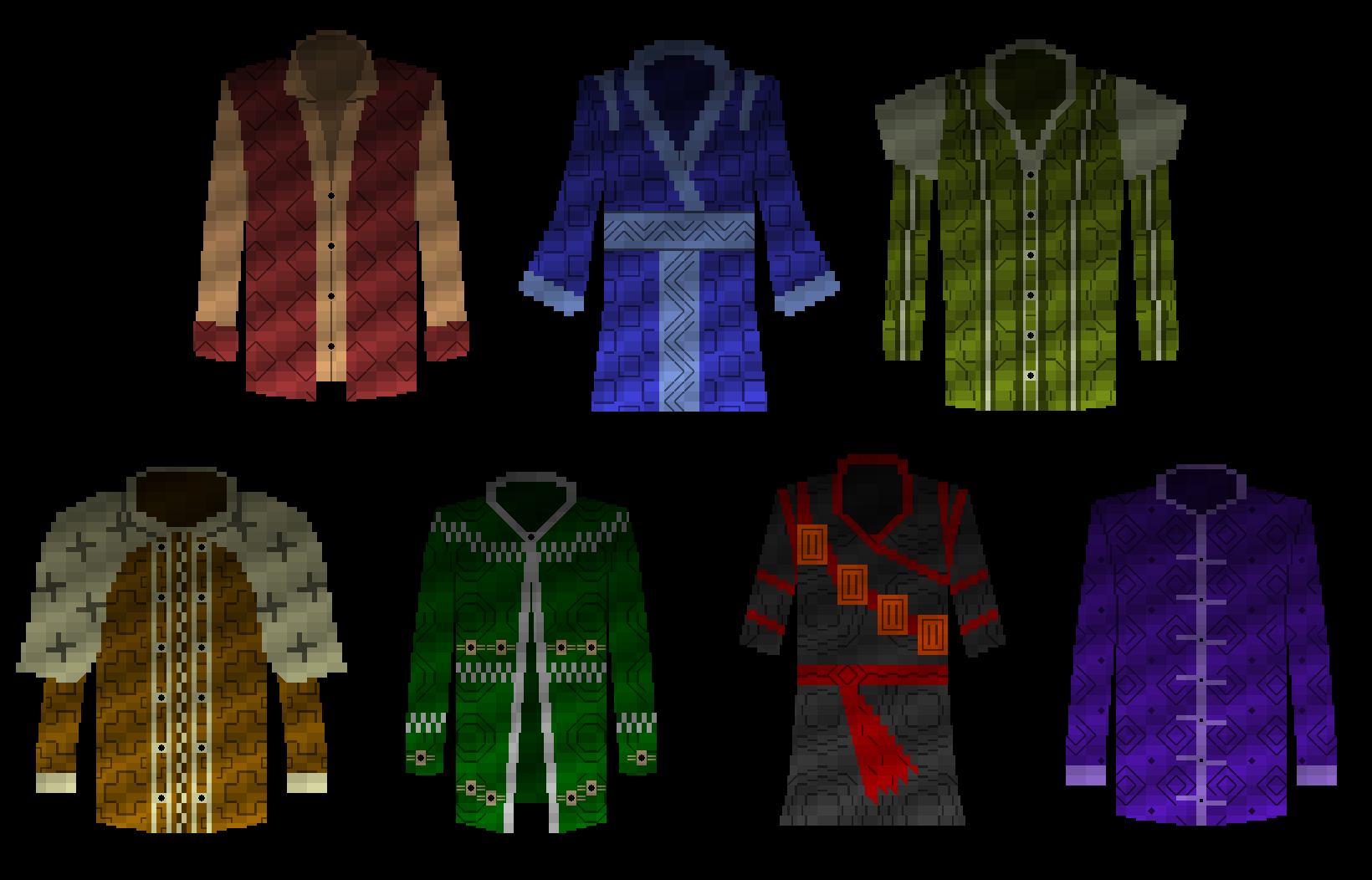 It is very challenging to make "trousers" which look even vaguely as interesting as upper-body garments (or boots or gloves, for that matter!), but I've done my best. The "Japanese" and what I have taken to calling "Hebrewlonian" archetypes in the above picture (middle top, and third bottom) will count as both upper- and lower-body garments, whilst the lower-body garments shown here will be distributed to the rest of the clothing styles. Although in many nations there will be little sexual dimorphism (so to speak) between clothing styles for men and women, this will not be the case in some cultures, and a "dress" clothing archetype has yet to be worked on (I'll get to it in the next few weeks). So some nations have the J/H archetypes above for both sexes; some nations will have the other above clothing for both sexes; some will have different clothing for the two sexes (and this will all, obviously, be chosen procedurally). So, some trousers/skirts etc (skirts are especially hard to make interesting, but I've done my best): 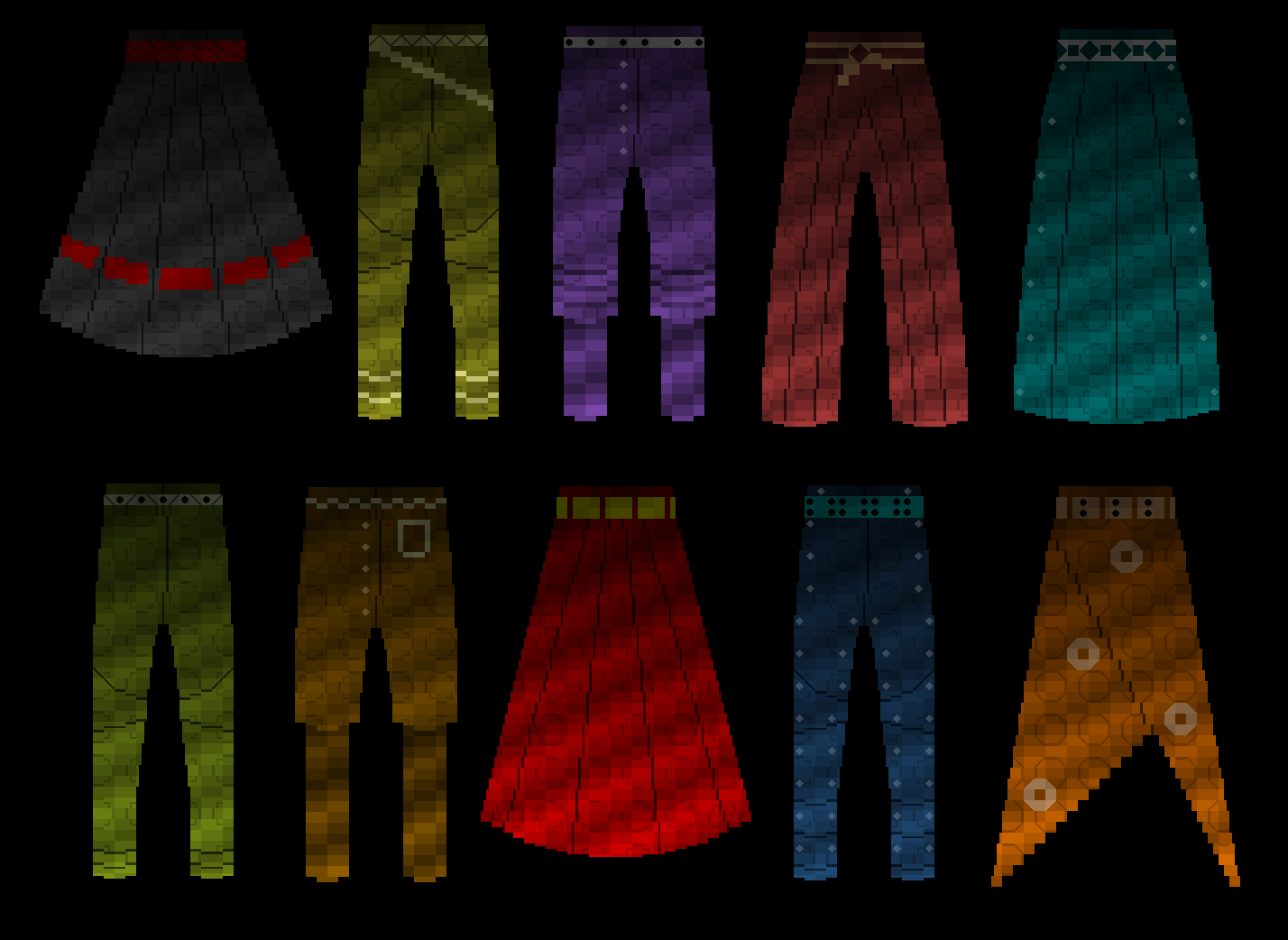 Now onto the "paired" items of clothing - boots (and gloves). I decided for the time being to forego "shoes" and go with something of a Game of Thrones/TV-adaptation-of-Wolf-Hall logic, i.e. that even those at the very top of society have to give something towards practicality and pragmatism, and basically wear extremely nice boots, rather than wearing beautiful footwear which never comes anywhere near a bit of mud. Boots, like gloves, have a distinct item for each in a pair, so that we can handle things like losing limbs, damaged limbs, etc, later in the game. Gloves and boots use the same colour system - they take the established colours from the clothing above, and then blend it 70% into a generic "leather" colour, to give the impression of dyed leather. Boots are therefore deliberately a tad less "striking" in colour than other items, but still maintain a strong semblance of the same colour schemes. Remember, as always, that you'll never see these next to each other in game! 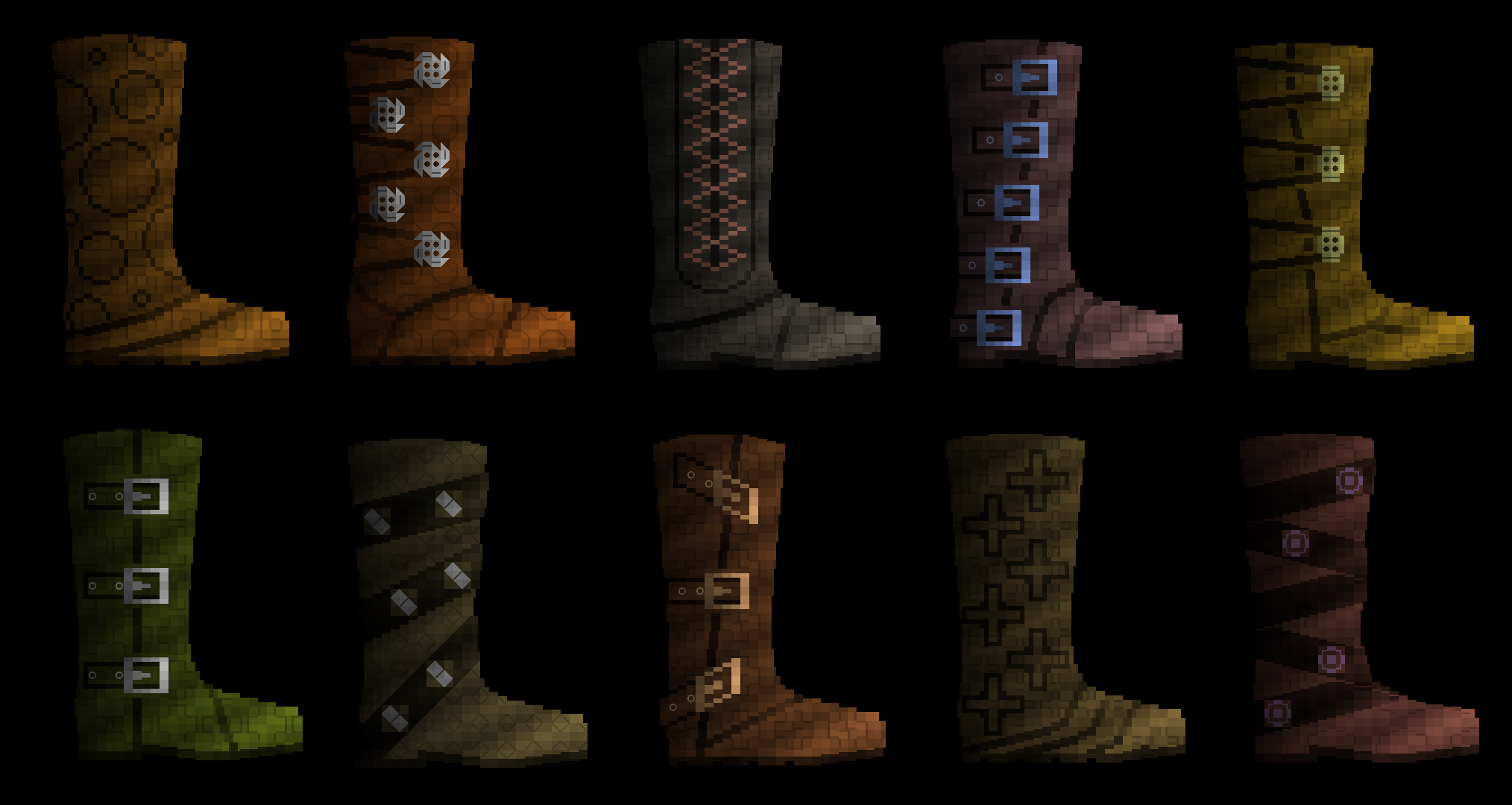 Gloves are coming soon... but possibly not before the end of June, since now that I have the three most essential items of clothing in place, I'm working solely on NPC mechanics in preparation for showing off an interim "0.8"-ish building at the UK IRDC at the end of the month.

Here are some complete (aside from gloves) "sets" of clothing - note, of course, that the zoom level does vary across each item of clothing so that the player can see maximum detail, and you'll obviously never see them all in-game "lined up" like this, but I think it's quite nice to look at some of the aesthetic consistencies across different items of clothing belonging to the aristocratic echelons of a given civilization:

(Note that Set 4 contains no lower-body garment since the robe covers both the upper- and lower-body slots, and also in some of these examples, the underlying pattern - square, diamond, etc - varies, which it won't in the actual game.)

I will be working on middle-class and lower-class/slum clothing soon, but that's taking a back-seat now to work on some mechanics for the version I want to be able to show off at the UK IRDC. There will also, of course, be distinct clothing styles for nomadic civilizations and tribal civilizations, but those are going to come along later, although I do have some ideas for what types of generators I'm going to build for both of those.

Clothing generation is increasingly pointing towards an obvious but potentially very interesting and unusual mechanic: the ability to "fake" being a member of a given culture. Perhaps you can don clothes of other cultures (and perhaps lighten/darken your skin, as many real-world explorers and "adventurers" in the distant past did for exactly this reason?) and attempt to "pass yourself off" as a native in a distant land... which then yields potential gameplay around attempting to maintain the deception, say appropriate things in conversation, and give nothing away, whilst perhaps other NPCs are capable of noticing slightly unusual things about your character which suggest to them that all is not as it seems? I think this could be some really interesting territory to explore in the future...

Well, we now have heads, upper-body and lower-body clothing, and boots, so I'd say we're about to ready to actually create URR's NPCs. This week I'm going to be working on optimizing the field-of-view algorithm which needs some serious improvement for the next release, creating the new "character lookup" window which has room to include a face and to scroll through their clothing (and in 0.9 their armour and weaponry, if any), and continuing to work on crowd mechanics, spawning/de-spawning NPCs, etc. See you next time for an update on hopefully all of these things! In the mean time, you can keep up to date on my devlog,Facebook page, or Twitter.

Nice, I'm loving the look of those boots, and I look forward to seeing the crowd mechanics.
If you ever do feel like returning towards working on other types of footwear I would probably make and reserve simpler types of shoes for the lower classes, for those that can not afford the boots, taking inspiration from the leather slippers worn in the middle ages.
This would make for some variation and differentiation without having to create even fancier shoes for the upper classes.
I would also look at roman sandals as inspiration for warmer regions, there are a lot of interesting designs one can make with those.

Excellent, thanks! Hoping to have crowds working on a basic level in the next fortnight, though today and tomorrow I'm finishing off things like wearing/removing clothes, looking at the clothes an NPC is wearing, integrating face generation from the experiments file into the main game files, etc. Definitely going to be other shoe types, sandals, etc, and also variation for nomadic and tribal civilizations, as well as the "feudals" we see here.

you know looking at this one and the other articule, you should also make the Army's uniform, and make a mechanic that let the player diguise and get inside military building (that would wait to the story implementation :D)

I am thinking about how exactly army uniforms are going to work! Still researching it (but I totally agree about army disguises!)