Getting started on generating clothing styles for each nation!

Posted by UltimaRatioRegum on May 31st, 2015

This week I’ve been working on both generating clothing styles for different civilizations. There are currently six “archetypal” clothing styles, each of which has three sub-styles within it, and each sub-style has its own variation between specific items of “identical” clothing (just small things like the width of clothing relating to the size of its owner, fractional colour differences, that kind of thing). As the maximum number of feudal civilizations the game allows at any one point is eighteen, this works out perfectly, so all/most of the styles will be reflected in each game (though I might add more later). I’ve so far worked entirely on upper-class clothing for rulers, aristocrats, military commanders, etc. There are several dozen colour combinations, and each nation will pick one for its upper-class clothing and then have those same colours reflected, to a lesser extent, in its middle/lower-class clothing. This week we’ll have the upper-class clothing, then in a fortnight, probably the remainder of clothing and some early development of crowd mechanics, if we’re lucky?! So, here’s an illustrative sample of five of the six “archetypal” clothing styles (the last one is not yet finished): 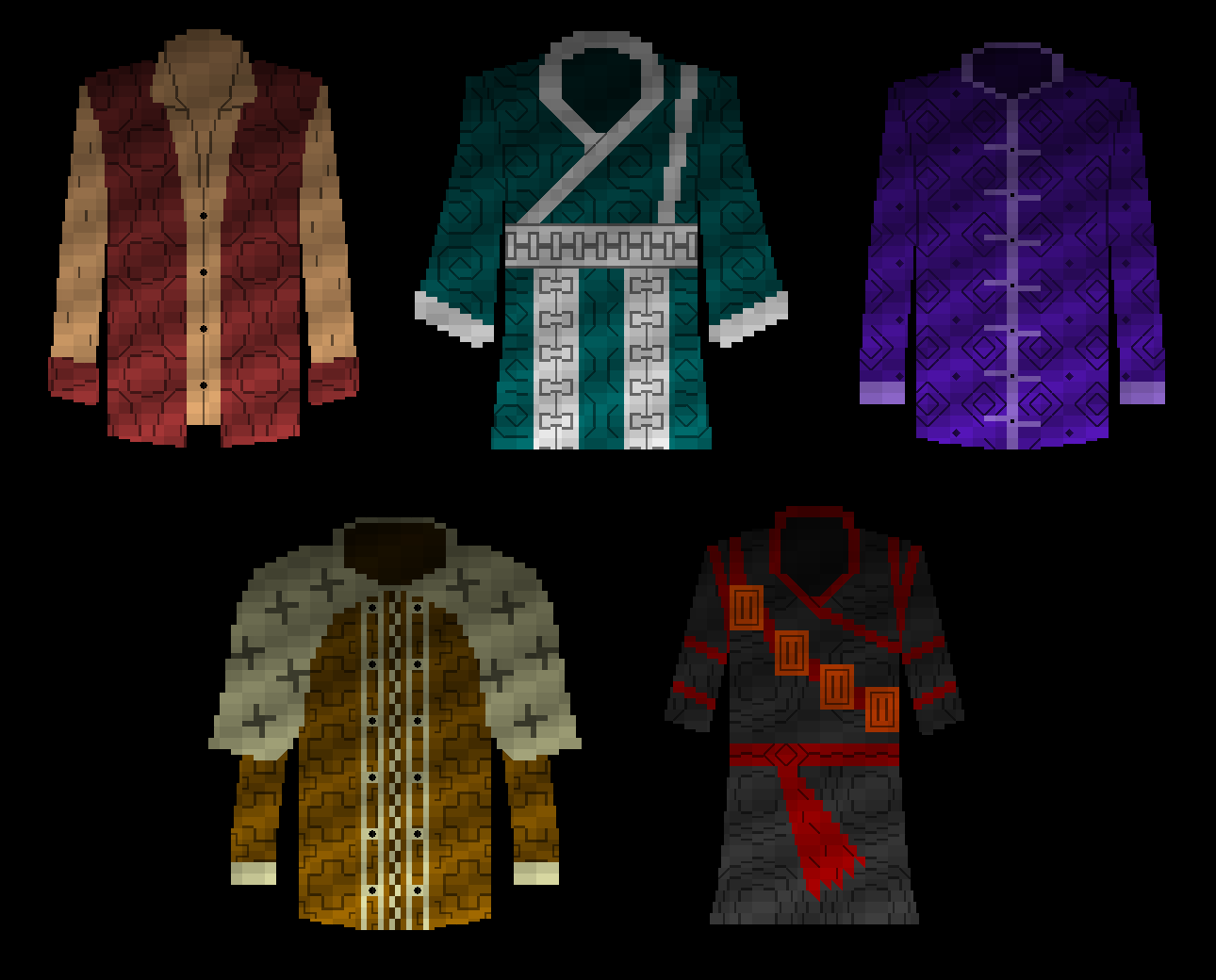 Going clockwise from the top left, these are inspired by “classic” Western medieval clothing of leather (or other material) waistcoats and a shirt underneath, though here I’m treating them as a single garment; the second is inspired by Japanese kimonos; the third is inspired primarily by older Chinese styles of dress, and also some more “tailored” Western styles; the fourth (i.e. the bottom-right corner) is inspired from a range of styles including far more ancient Babylonian and Hebrew dress; the fifth is based on a lot of Eastern European royalty, and the sixth will be based on Renaissance Western Europe (but is proving surprisingly tricky to realize). These then have the three sub-styles as described above – which consist of different patterns, different locations of buttons, lengths of sleeves, sizes of collar, colour schemes, etc. To take a closer look at the variation within one archetype, let’s go with the Hebrewlonian (???) archetype, of which I’ve included three below. (There are actually a dozen different possible patterns which can appear on the “clasps”, but just weirdly enough, all three I took for this picture happened to select the same one, and now I’ve only just noticed this and I’m severely disinclined to go and generate them again, so we’re just going to have to make do with these). The right is “average” size (which will include “muscular” or whatever other build definitions I wind up with), the middle for someone slim/athletic, and the right for someone much heavier-set. So these would be belong to three neighboring civilizations who might have experienced a level of cultural bleeding between each other’s society, but maintain their own styles of dress nevertheless:

So, each of these might be tethered to a different culture, but I’ll also be sure to place those cultures next to each other (think pre-modern China, Korea and Japan, for instance), so that you get some sense of “similarity” (sometimes) between clothing styles of nearby nations (though given that many nations might have complex territorial shapes, there is only so far this can be pushed). Naturally there will be coupled with appropriate lower-body garments, boots, gloves, etc, and then we’ll be done with clothing for this release (with armour and weapons… next release?). In the new NPC lookup (or the same for the player) you’ll be able to scroll through all the clothing on an NPC to let you examine what culture you think they might be from. Maybe a logical mechanic would be to have NPCs judge the player, at least in part, based on their clothing style (and many other factors) so that there might be some ability to attempt to pass “undercover” in nations unfriendly to your own. As with everything else: the game will never tell you “this is the clothing style of Nation X”, but once the player has that learned that, you should be able to come to recognize those you encounter in the street, or the origins of foreign merchants/travelers, etc.

I’m now working on two things simultaneously: crowd mechanics, and remaining items of clothing for middle-class and lower-class citizens, and then lower-body garments, boots/shoes, etc. I’m basically working to an “interim” deadline right now since I want to show off a stable build with crowd mechanics functioning (and all clothing items implemented) at the IRDC 2015 I’m hosting on 27-28 June, so all academic work is on hold now whilst I grind towards that goal. Metagame follow-up next week, then more delicious URRpdates! In the mean time, you can keep up to date on my devlog,Facebook page, or Twitter.

It would be interesting to see the clothing being reliant on a chain of supply for materials, with lower standing social classes using more common materials for the civilization, and rather than randomly generating the preferred color of the clothing it could rely on the supply of the materials and herbs being used for dyeing. The reason that, for example, purple has been associated with the western royalty for long periods in the past was originally for the difficulty in producing the color.
A system based on the availability of resources would hopefully provide a more dynamic grouping of regions than only basing it on the culture of the area, although it would of course all depend on what sort of system you would use for civilization wide resource management and trade.

Whew. That's... an interesting idea. Part of me is disinclined because that's an aspect of simulationism that doesn't interest me as much (what we might call "resource" or "physical" simulation rather than the kind of cultural simulation I'm interested in), but at the same time, that's a cool idea. Perhaps I could ensure that plants that yield unusual dyes are always tethered to civilizations with certain clothing colours? I'll definitely think about it!

maybe the colors doesnt toitally rely in the materials that they have access too, in the trade rich countries they would have a culture's fav color (making it highly common) like red in china (something about luck that i dont remember), and purple/blue in some western countries... in acient rome, the purple was soo costly that only the empereor or rich merchants would pay the dyes used to make it, or the manufactured clothes with that dye... in these cases that would make it common only in higher clases :D

maybe the colors shouldn't totally have to rely in the materials that they have access too, in the trade rich countries they would have a culture's fav color (making it highly common) like red in china (something about luck that i don't remember), and purple/blue in some western countries... in ancient Rome, the purple was soo costly that only the emperor or rich merchants would pay the dyes used to make it, or the manufactured clothes with that dye... in these cases that would make it common only in higher clashes :D ((Sorry spellcheck edition XD)

These clothes are very nice !
There is just a little mistake in the description of the image of the 3 sub-styles, you used "right" twice (once instead of left).

I can't wait for a post about the crowd mechanic, you always succeed to make me impatient to read your next post !

Excellent! And nice find on the typo. Yeah, crowd mechanics are coming! Probably not the next Saturday, as that'll be a follow-up to this controversial post I put up on the blog last week, but the week after should see it :)

Making the upper garments darker near the collar seems an odd choice to me. That certainly wouldn't be the part of the garment shaded while it was worn.

Certainly true, but I just tried a bunch of shading (light shading, not fabric shading, as it were) options and this was the one I was happiest with for giving a little bit of depth to the garments.