In this patch I have finally figured out a good way to handle asynchronous collisions, you can now push stuff around. Fire, Lightning and a few other effects has been updated and the server now runs a lot faster - causing player locations to be updated a lot better. Read on, there's more! 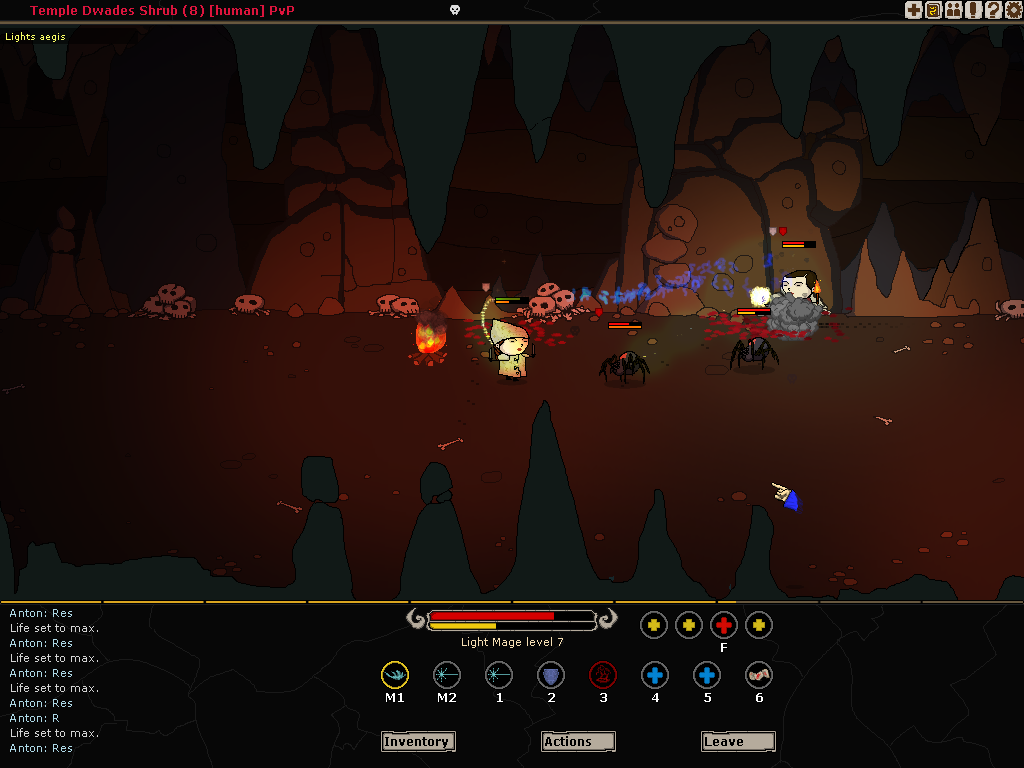 A brave Light Mage takes on a spider cultist.

Patch 1.1.0 Monster Colliders
I have been doing a side project on rag dolls for a while and that has given me a much better understanding of vectors, that means I have finally found a nice way to do asynch creature collision.
Applied force is now transmitted to objects you collide with meaning you can now push stuff around.
The server has also gotten a bucket sort upgrade, resulting in much better server performance - this should be noticeable when playing with others as player coordinates are now broadcast much more frequently.
I read up on some pixel effect strategies and Light, Fire, Shadow and Lightning effects have gotten some nifty updates. (Looks cool!)
A few high level monsters have been added and a lot of monster have been tweaked.

HoTs and DoTs can now stack, removing the class debuff restriction. It should now be viable to have more than one Urge Mage. The balance issues this may cause are a bit difficult to predict so feel free to use the new forum here on ModDB/IndieDB/Desura.

This weeks class pick is:
The Fencer
This archetypes focuses on high mobility, damage and defensive cool downs, they are adept at getting in and out of combat while dealing heavy damage and evading attacks for a short duration.

The Emberblade - Fencer subclass
The Emberblade is a student of the secret teachings of Urge mystics, they combine fiery Urge manifestations with swordplay focusing on dealing maximum damage in short bursts. This reckless style does decrease their survivability.

The Waterdancer- Fencer subclass
These philosopher swordsmen study inner tranquility to better their awareness of their surroundings. This greatly increases their ability to evade damage and harmful effects, their ability to deal damage does decrease a bit however.

That is all for this patch, may Dwade pass you by.