Map rendering is now based on WebGL. This enhances the performance as it engages GPU. 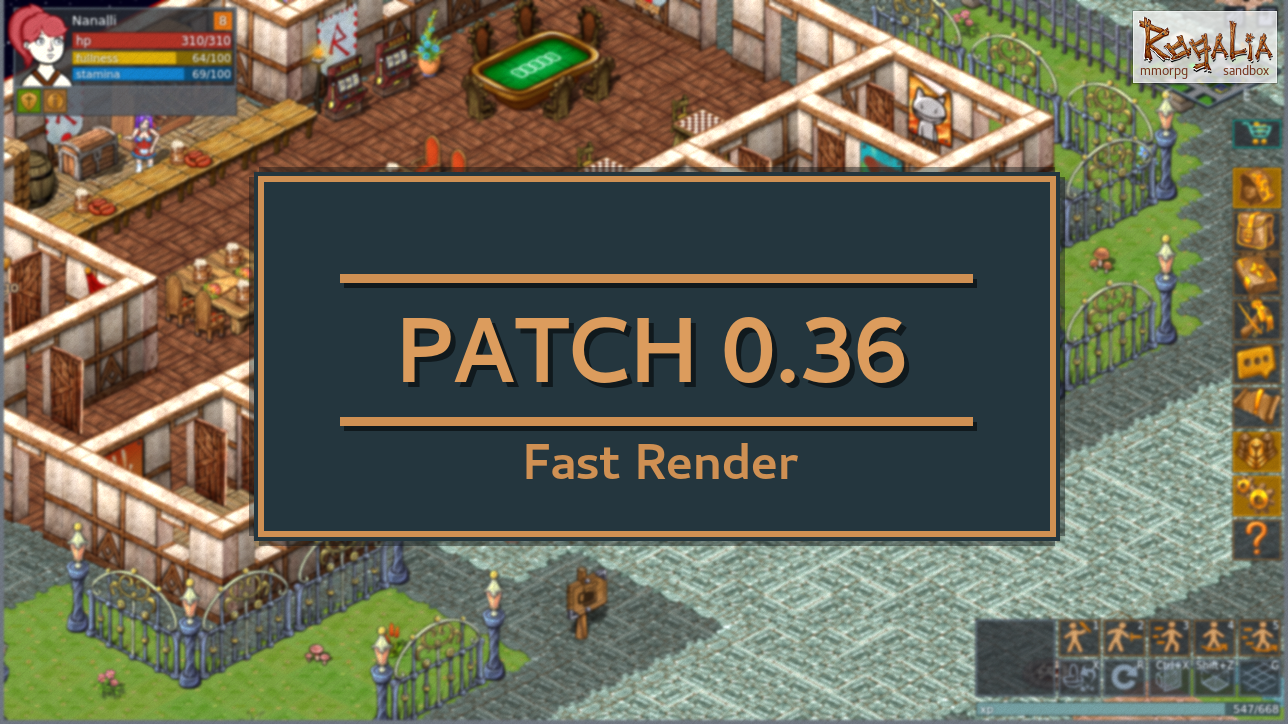 Fast Render mode has been fully modified (in Settings).Map rendering is now based on WebGL. This enhances the performance as it engages GPU.
The thing is that about half FPS load was from the world surface rendering. For the new generation mode, we have modified the code and redrawn the textures at a different angle, but without transition tiles for now. Now the performance will be way better even in fullscreen mode (*fullscreen to chat).
Please activate Fast Render mode in Settings and give us your feedback in the forum.
When the new map rendering is ready, along with the textures, this method will be the main one, so you won’t have to activate Fast Render mode.

The option to remove items from optional panels by Ctrl+click has been added.
Application of different scrolls from an optional panel has been corrected.

Generator implementation has been made more complex. Generator takes into consideration the context, e.g. it does not place large objects in narrow passages. Decor will now be spawned adequately; the number of ore veins, blocks and mushrooms has increased.

Memory leak attributable to bags has been adjusted.

Partial translation to Chinese has been added. Translation is still in progress.

Collector has been updated to solve the issue of starting the game in certain cases. It will also help to handle the situations where it's impossible to restart the game.

Pocket version of dynamite has been added. Its explosion yield and blast range has increased 4-fold. Damage will vary from 1-fold to 2.5-fold according to quality.
If a tile is undiggable, dynamite will make it diggable.
A diggable tile will be made passable. Within a half of explosion radius, dynamite will explode twice (applies to the landscape only).

- After sawing of logs, boards will be piled into inventory.
- Grandmaster mark will remain after cooking in the oven.
- Wild cats and dogs will not foul any more; wild chicken will not lay eggs.
- Motion speed on sand, water and mountain tiles has increased.
- Horses can be reanimated.
- Sprites of horses that were not displayed have been corrected.
- Monsters will not chase horses to the end of time.
- Axe parameters have been changed: speed down by -25%, durability up by +50%.
- When you get hunter’s root or worm from a stump, firewood will also drop.
- Firewood from skill dependency improved: on skil 100l you will get 5 firewood from a log or stump.
- Wild animals will now be adequately generated.
- Durability of shields, starting from titanium, has significantly increased.
- 10-minute speed-up scroll has been added. It will be discontinued by damage or mushroom essence.
- Speed-up scroll, like portal scroll and runes, can be purchased from Sabrina.
- Number of monsters under ground has increased by appr.20%.
- Monster aggression period under ground has reduced to 45 seconds.
- At level 3 of dungeons, there are more ores now, except meteor platinum and mythril.
- Potions have been added to trophies from Mocherators.
- More soulstones added to trophies from Shadows.
- Energy has been removed from the teleportation rune recipe.
- There is a minor chance to get Mandibles from an itsy bitsy spider.
- Heads and runes will now adequately get linked to the chat.
- Health formula has changed: initial basic HP is now 480 instead of 300. Maximum HP remains unchanged.
- Potions and cream have changed.
Cream: restoration effect before 0.8%; now 12 + 0.4%
Minor healing potion: restoration effect before 3%; now 45 + 1.5%
Healing potion: restoration effect before 6%; now 90 + 3%
Greater healing potion: restoration effect before 9%; now 135 + 4.5%
- Smokes have changed.
Cigarette duration: before 10, now 30; hunger before -5, now -7; recipe x2.
Cigar duration: before 40, now 90; hunger before -10, now -12;
Joint duration: before 60, now 120.
- Levels of certain monsters have changed.
- Experience for monsters has reduced, it no longer depends on the level.
- Healing scroll has been added. It can be applied to an ally and other player.
- A soil dryer to desiccate soil to sand has returned to the game. Basic durability is 36.
- Higher daemon now controls 2 fire pillars instead of 1.
- A stone pile contains 96 stones.
- Added a bone bow and steel crossbow.
- Improved crossbow shooting speed from 3 to 2 seconds.

New items have been added: a new wooden chair, a new bookshelf, a three-candle chandelier, a glass table and a glass stool, new carpets varying in sizes and colors, a new stone fence fleeced with moss, and a wooden clock.
The images for a stick gate, a bookshelf, a bed, wooden chairs, columns and thrones have been modified. 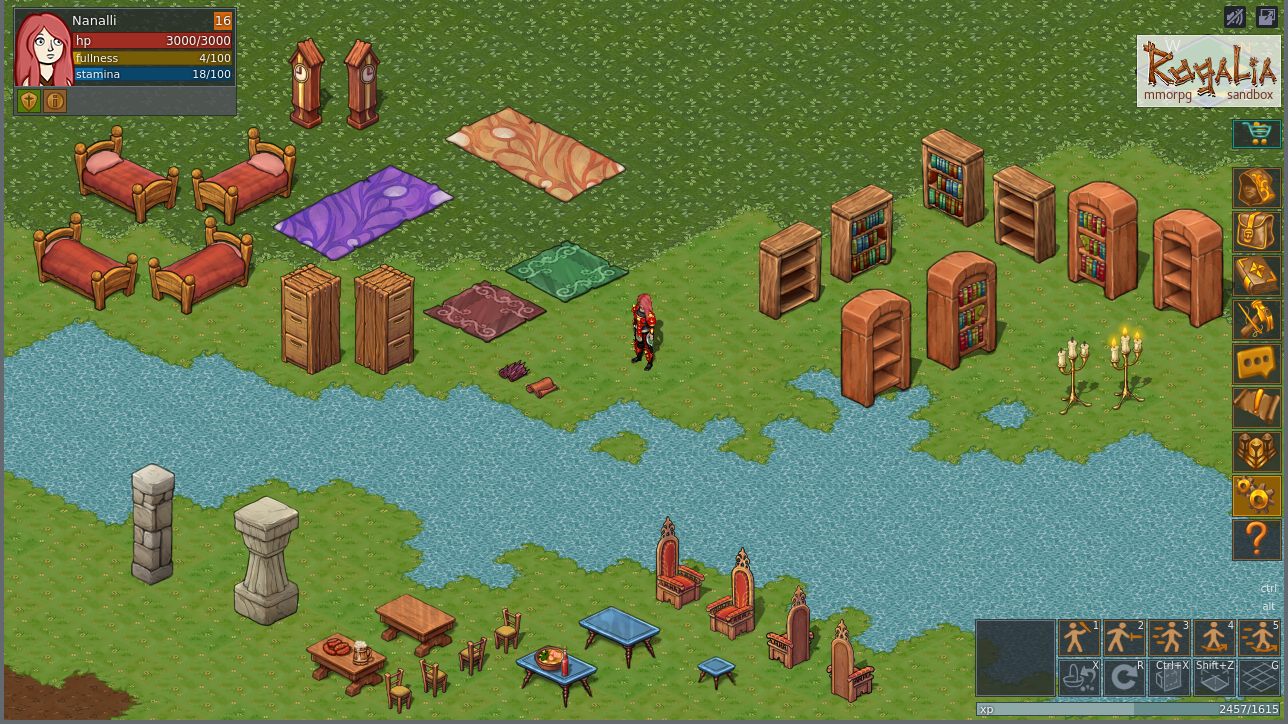 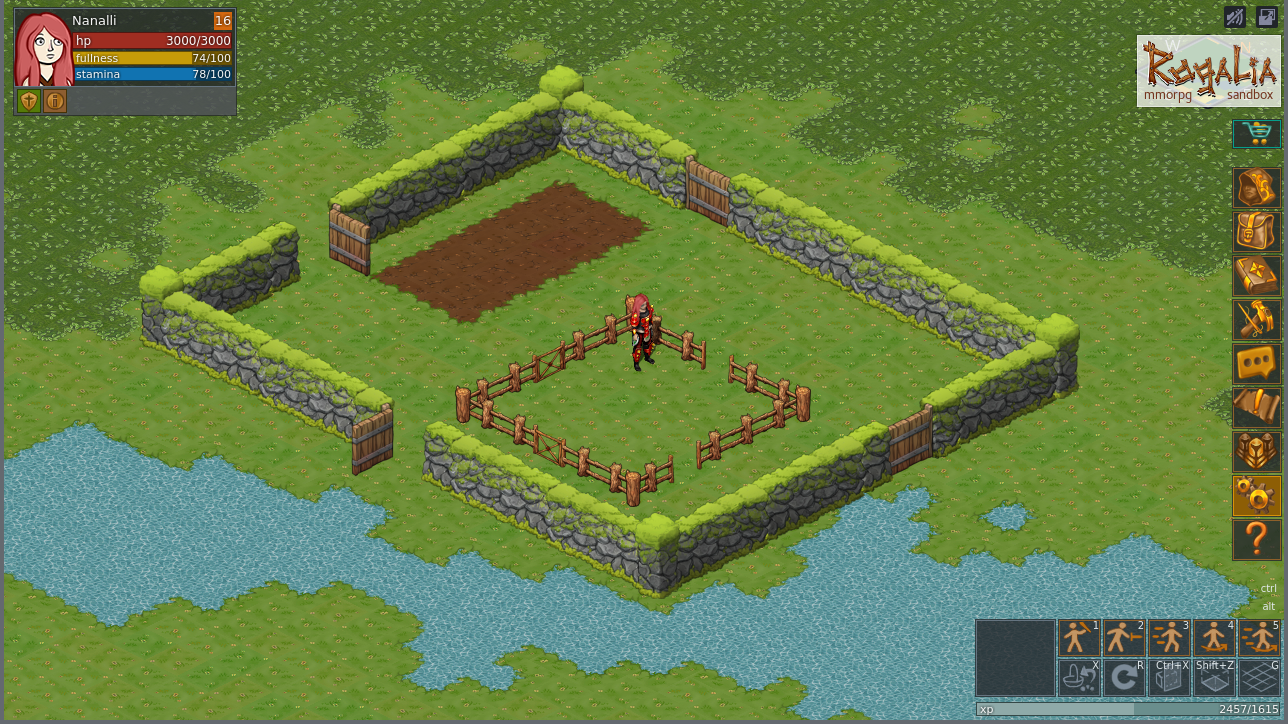