All you need to know about the gameplay evolution Wrath went through.

Last week we gave you a glimpse of the artistic evolution of Wrath. Continuing our series of Sin profiles this week, we decided to showcase some of the gameplay of Wrath. All of our Sins went through many changes in art and gameplay until we settled on something we liked. Some of these gameplay elements are still evolving as we test the game. Wrath, the sin of anger and rage, is no different. He is represented in game with the colour black. 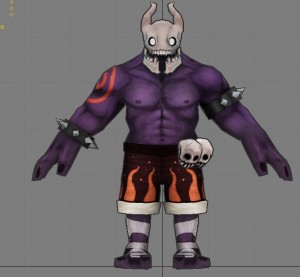 First, a little context. Each character in Party of Sin will have four different possible attacks: Melee, Ranged, Special and Super Power. Melee and ranged attacks are what you would expect and only do damage to angels. The sins are all similar in that respect. Where things get interesting is with the special attack and super power. The special attack is a unique attack available to the Sin at any time. It usually helps the Sin gain energy faster, and this energy is saved up to use the super power.

We have a few different design goals for these attacks. A special attack must be useful in multiple ways. It’s important for us that each special attack can help as well as hinder the team, since the special attack is the primary tool to use against other players. They must also have a use in puzzle solving, since we plan on having puzzle sequences in the game. Lastly, special attacks need to mirror the Sin they are attached to, so players understand the connection immediately. After using their special attack effectively, players will reach full energy and can then use their super powers. Super powers also represent the Sin they are associated with, but are much more over-the-top. Generally they are attacks over time which change the world in a significant way, more examples later. Now that you have a little context, let’s get on with the story of Wrath. END_OF_DOCUMENT_TOKEN_TO_BE_REPLACED