An academic paper on roguelikes, new laws, names for political parties, and new questions and responses!

Posted by UltimaRatioRegum on Feb 21st, 2017

This week (well, fortnight) we have some laws, some new list questions, some political parties, overall a reasonably large entry to make up for silence last week, and a paper, so let’s get to it:

Firstly and briefly, the paper I wrote a couple of years ago now on the semiotics of various ASCII roguelike games has moved from being published online to being published with in actual edition/volume of Games and Culture. To mark this momentous event, I’ve uploaded a pre-submission version of the paper onto my academia.edu account, so if you’re interested in reading the paper – the abstract is below here – then click here and give it a read, and do let me know what you think.

This article explores the semiotics of the “roguelike” genre. Most roguelikes reject contemporary advances in graphical technology and instead present their worlds, items, and creatures as American Standard Code for Information Interchange (ASCII) characters. This article first considers why this unusual graphical style has endured over time and argues that it is an aesthetic construction of nostalgia that positions roguelikes within a clear history of gameplay philosophies that challenge the prevailing contemporary assumptions of role-playing games. It second notes that the semantic code for understanding the ASCII characters in each and every roguelike is different and explores the construction of these codes, how players decode them, and the potential difficulties in such decodings. The article then combines these to explore how such visuals represent potential new ground in the study of game semiotics.

The game now generates a full set of laws for violence in each nation. These are not done in quite the same way as the other two sets of laws. Whereas “religion” and “trade” have a set number of values and each value always create a law in every nation, not all nations will even have some of the violence laws. It depends on the ideologies of the nation in question, and what they consider to be a meaningful violent event, and how severe they think it is. The game selects a set of laws, ranks them, and then distributes punishments according to the ranking of the crime, not the crime itself. Here is the sequence by which the game selects laws for violent acts, where the ones that a nation cares about the most come first, and the less important ones come later. As a result, you’ll see some very different values at play here, and what counts as a severe punishment in one nation will be far less severe in another, because it will be much further down the crime list, as a result of the nation being more concerned by other things: 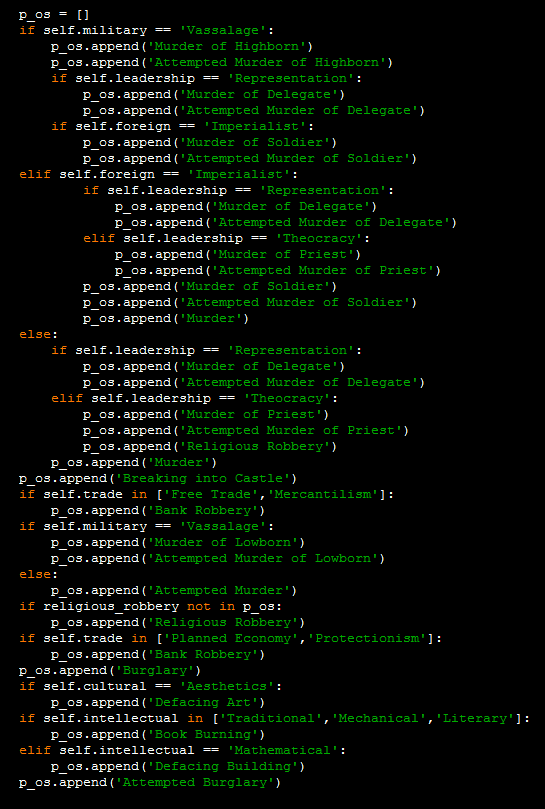 If I’ve calculated this correctly, this means the shortest set of violence laws is five, and the longest possible set is thirteen, with most nations naturally falling somewhere in the middle. In each case the top crimes merit a “Punishment 5”, which is the highest level of punishment – such as three arena battles to the death, or a lengthy imprisonment, or a severely damaging physical ordeal – and the bottom will merit a “Punishment 1”, and the others in the middle will be distributed appropriately. I’m confident this will again generate an interesting and unique set of consequences for your actions in each nation, and when coupled with the wide variation in punishments, and the kinds of punishments that your character might or might not be able to withstand depending on your build, items, etc… I think some very interested decisions will emerge from this process.

NPCs are now able to talk about their parents, siblings, grandparents and children, in a pretty wide range of ways. For instance, if you ask about parents, they might simply answer that their parents are nobody important (if they feel you’re disinterested, or of a much higher social status), or might name only one, or both; alternatively, if their parents are consequential people recorded by the game, or they are important, then they’ll probably have some more info they’ll (proudly) be willing to give out. For the longer lists, the game also takes account of the sex of the people being mentioned, so they might say “My two brothers are X and Y and my sister is Z”, or “My maternal grandparents are X and Y, my paternal grandparents are A and B”, which will also vary based on any particular bias towards either sex present in that nation; for extremely long lists, lastly, such as children or siblings, they can now reel off a full list that is always grammatically correct. These lists also include titles, too, so you might get “My mother was Queen X the 1st, Keeper of the Brass Casket, and my father was Prince Y, Consort to Her Majesty” – or whatever.

We covered these briefly in a previous entry, but NPCs are now able to tell the player about everything in these categories. Some of these require different lines of code, as in the case of trade and religion laws there is a finite set of “things” that each nation will have laws on, whereas for violence, some potential violent acts simply won’t be recognised or won’t be relevant to particular nations, and therefore won’t be there. Either way, people now give you a nicely detailed list of these laws; and as with everything, how much people tell you will be modified by mood, and their knowledge of their own nation…

I’ve started to implement the code for NPCs replying to questions of the sort “are there any X nearby”, where X might be cities, towns, nomads, tribal nations, mountains, coastline… you get the idea. There’s a pretty wide number, and some of them have to request information from different parts of the game’s databases, but this code is now being put into place. There are also now appropriate sentence structures here for people to word things appropriately; for instance, if there are individual things, such as towns, you’ll just get a list. By contrast, mountains do not take up individual map tiles but stretch across mountain ranges, so someone might say “There are mountains far and very far to the northwest, far to the north, and somewhat far to the northeast”, which should give the player a decent impression of what the mountain range looks like. (The same then applies to deserts and coasts and so on).

Returned to political parties and developed names for the parties, which will soon be matched up delegates, and we should be able to get some kind of political system actually working. The game first selects a number of parties for each nation, which is semi-random and partly influenced by several ideological factors (outside of their commitment to a democratic form of government), and then (as we discussed before) ranks the various overall trends in the nation, such as individualism or collectivism, nationalism or globalism, and so forth. It then creates parties for the dominant trends, and sometimes with a secondary ideology from lower down in that chart, and now it finally creates names. As such, we can now find NPCs who might be willing to tell you about parties such as:

The Party of Enlightenment

The One Reformist Party

The Association of Independent Selfhood

And so on and so forth. As with most things in URR, you should be able to extrapolate some reasonable guesses about the commitments of these parties from their names. In a later version I’ll connect these to delegates, and get the political system in democratic nations working properly.

As you’ll have noticed, we’ve slipped back to a fortnightly update this time – although I’m generally back to a post every weekend, this last week has again just been absolutely jam-packed, and I had to push things back. However, hopefully, updates will resume the weekend model from next weekend moving forwards, and I promise lots of screenshots next week. I must apologise for this, but leaping back into the weekly blog posting has been quite a bit new pressure on my time, and although I thought I could go from sparse blog posts to every week: it hasn’t been quite that easy. Things are ramping back up, but maybe just a little more unevenly than I’d hoped. I am also working on finishing my first book at the moment, which is of course taking up a lot of my time, as well as planning how best to get around the world and take up three visiting positions in three countries in the coming months, so there’s a lot of admin in my brain at the moment. I’m desperately hoping to get 0.8 before April, as otherwise that’ll be a ridiculous two years between release… and that’s just too damned long, however much detail I’m putting in to this major version. Nevertheless, normality should resume again next week, with hopefully an even more significant URRpdate. See you all then!