The dog soldiers have decided to stage a last stand against a superior force.

One challenge I have as the artist on Overgrowth is working with David so that each area can help tell the story of the game. As a gamer, I don’t like having to sit through drawn-out cinematics when I could be playing. To help avoid that, I am working hard so that the visuals of each level tell you what is going on there. Some parts of the story are still best told in cut-scenes or with dialogue, or even with ambient audio. When designing a level I can plan that out too.

The setup for the level in this concept is that Turner is trying to get some information from a specific pack of dog warriors. 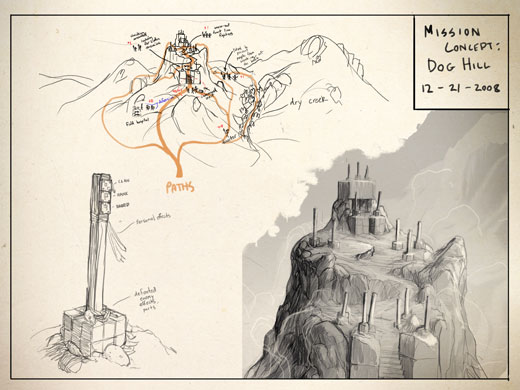 The dog soldiers have decided to stage a last stand against a superior force. They have chosen this location because it is easily defended, and thus has been the site of numerous previous battles. The rocky crag is covered with the graves of those dog warriors who fought and died in the past — these graves are monuments to their bravery in combat.

Please remember to vote for us, join the facebook page and become a member of the steam groups.

Looks great man, I can't wait for the game!

Cool, can't wait to see this all comes together :)