I plan to have an "open day" for players to pop in and check out the Forum Romanum when it's done, just for a day.

Greetings one and all!


First off, had a bumpy week last week, finally got back on track with working on the game today, where I've so far been working out how the seamless Forum Romanum would work in relation to the surrounding grids, plan to make a start on Aedes Saturni after this news piece.

So. As a little public relations event, I thought I'd have an "open day" for players to pop in and take a look around, meet and greet, ask questions face-to-face, etc. in the future, once Forum Romanum is done.
Now, Forum Romanum itself will take another month or so, as a complete approximation on if I had 2-4 days a week to work on this. Less if I get more free time to work on it.

So, yeah. That's it for this news piece. Open Day for players to log in, take a look around, get a feel for the game, chat with me, chat with others, and all that jazz. I'll make sure it's on a saturday or a sunday, too, depending on a poll or some such, so players can say when they'd be available.

I'll even make some clothes for the player's sprite, so we aren't all naked. I get agitated when I'm running around naked in a game, my self.

Each square is one default "area" in-game. The Forum Romanum is 6x2 areas, put into one big area.
The red lines depict how the roads are planned to go - for example, how some roads go south-west, or south-east-east, instead, they'll go in an up/down/left/right fashion. 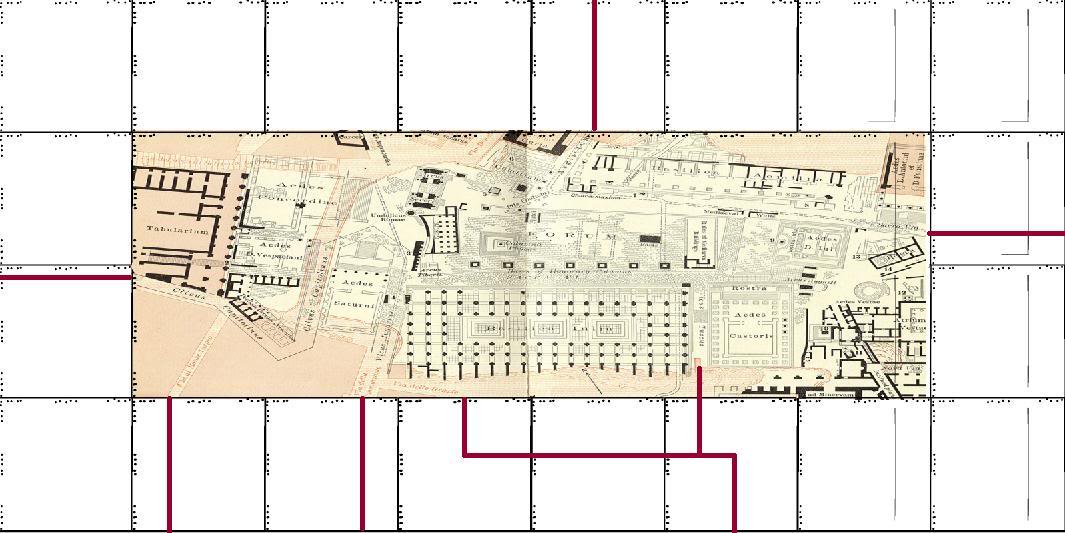 As for when the Open Day will be, hopefully in the next 3 months. I may postpone it till New Years, for a splash of dazzle.

Go go!
Are you a lone dev., or do you have a team?
If you're a lone dev., congratulations, you're making advancemente awesomely. Releasing a playable demo in such little time, and that much things you've done.

Working on my own, don't really need a team as of the moment, I can cover what needs to be done thus far. Just takes more time is all, at this rate. :)

The demo will be very, very, small and limited, but I like to give back as much as I can to the community and people following the game, in return for their support which drives me so much further than otherwise!