Hello Zomboideers, It's Mondoid time again, and we're happy to report that build 11 is very much in the pipe. It's just this second about to enter closed testing to make sure it doesn't irradiate your PC, destroy your saves and set fire to your cat. Assuming all this goes okay, we'll be making a public forum test build. You can look at last week's Mondoid for more information on the contents.

So now some other bits and pieces.

In an attempt to escape the coming kitchen apocalypse (forum members know what we're talking about), as well as our old forum software being buggy, insecure and woefully inadequate for the amount of activity and posts we get, we've finally moved to a new forum. You can find a link here. We've still not done a proper design for the boards, sticking a token Spiffo in there just to make it clear you've come to the right place, but the forum software is oh so nice and the fresh start is rather wonderful. Why not come in and say hello?

Development on the new NPCs continues apace, and it's all very exciting. We're keeping a lot of the specific scenes and events that we have added, or plan to add, a secret, as we'd love for them to be discovered in-game instead of being listed on the website, however here are a few things you can look forward to:

Guard / Patrol
Upon game start, when a survivor group is created, a leader will be assigned, and that leader will immediately start giving orders to their group to patrol the building, or guard windows. At the moment they open curtains, but in future they should probably use a currently non-existent 'peek' mode or something. Whether this will be in the first NPC update or not, it's something that should be possible for the player too.

Patrollers will wander slowly around the building, randomly wandering about on occasion, investigating noises, etc.NPC patrollers / guards will react to spotting a stranger, particularly one trespassing on their safehouse, based on their personalities. 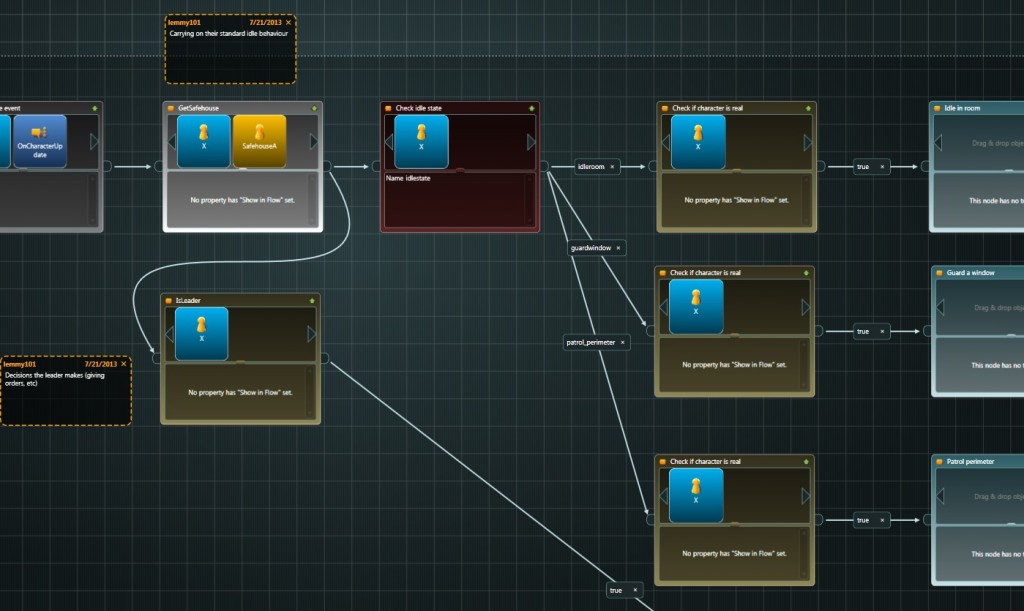 NPCs will have proper line of sight, and will react to seeing zombies and strangers as you might expect them to, and thus sneak mechanics become more interesting. Sneak into an NPC safehouse at night and take what you need? Stake out the safehouse and watch for the stronger NPCs leaving to gather supplies, avoiding guard patrols. This all becomes a big part of the game. In future when we have anims for sneaking / peeking this should add a whole new level to the game-play and it's very exciting to imagine what will come from it.

The NPC leader will arrange looting missions, picking a team to accompany him/her, they will leave, leaving a new temporary leader back at the base. They will go to the target loot building and stock up, head back and report on any events. A new and completely valid tactic for a player would be to find a well established NPC safehouse and take what they need from there.

NPC groups who meet may join forces, move along their way, or fight, depending on the personalities of leader and others in groups.Archetype start groupsLone crazy man? Brother and sister? Husband and wife? Father and (adult) sons/daughters? Gang of aggressive thugs? Groups at the start of the meta-game will have (as well as some randomness) different themes to draw from. Obviously these will change as groups join together or members die. While we may not have dialogue to represent all these kinds of relationships at the moment, they will have relationship modifiers and have some interesting effects on the meta-game.

New system of handling combat involving NPCs, players and zombies. Totally transparent to the player, but essentially has meta based combat system based purely on character stats when it occurs outside the player's streaming radius. If a real combat situation occurs around the player, it will grab everything in the area and put it into a virtual 'combat battle arena' that tracks all characters involved (and adds / removes as necessary). Nothing changes about the combat itself, ran purely off AI and player actions, but this allows us to track victory, defeat, retreat, stalemate results out of real combat that works in line with the meta results. That all said we would like to tighten up the AI combat to be a tad more deterministic, putting different characters into the mix having similar or preferably identical probability results of defeat as the meta combat would. This may take some time, but the framework is there now.

Because we would like to get some NPC action into the game sooner, rather than later, and because there is still a fair bit of UI work required to give the player the ability to order NPCs on looting missions and what not, it is unlikely we'll have players joining NPC groups, or forming their own groups, in the initial build. Just like when we removed NPCs from the build in order to get it out faster, this is not impacting the amount of time until these features are added, but rather it is a way we can more quickly add NPCs to the game and we feel it's the best possible move to fill the void in the game-play that currently exists. It's possible we may allow the player to join other NPC groups as a subservient in the next version, but that's not certain. Chances are you'll either be allowed to stick around and be otherwise ignored, or told to leave and be shot if you don't oblige them.However, at this point, we'll have the meta-game system in place, and as the UIs are completed we'll be able to fill out the meta-game events, scenes, and NPC interactions pretty quickly after this.

SOUNDS AMAZING but when will they be in the game

Man, this just keeps getting better and better. I can't wait!!

Sounds awesome, would there be dialogue options when interacting with other NPCs?

Oh man, that would be awesome! Or being able to trigger "missions" to scavenge particular items to keep your crew's morale up or something.
Of course, when I say trigger missions, I just mean they tell you what they want. Not that it gets added to some sort of quest log or anything.

URMAHGLERB it looks amazing cant wait for this update!! Cant wait to have Gang battles in a Zombie apocolypse, seems very interesting. Random request, there should be the addition of children, and the possibility to be them. It would add a new twist other zombie sandbox games dont yet have at the moment. Good Work Everyone!! I beleave this will be the best game ever!

Is it made OK because they're the *living* dead?

Oh yus necrophilia is our fetish

Great work guys, liking the new forum too! Keep it up!

Will the lighting engine bug on ATI cards be fixed?

the way the updates are going i think im gonna wait another year before i touch this game again, hopefully it will be beta or even a full game by then!?! high hopes? lets hope not.

Can you make this 100% windows seven compatable yet? please and thank you :(

Great game even though I just die over and over again lol.
I watched vids on the game but I don't see how one lives long
enough to learn how to barricade and farm but it sure is fun trying.
Wish there was a save ability at anytime so I could continue my
character and actually eat some home grown veggies from my farm...
Where are all the vehicles in zomboid? Would be fun to mow
down a few hundred zombies.... no? ;) On the verge Update sounds
interesting! When is the verge to take place? All in all love the
game so far well done keep up the great work!!!

Vehicles, NPC's, Military grade weapons, silencers, reusable weapons like crossbows and throwing knives, all the stuff that I would call "progression" isn't implemented as of yet.

It's still alpha, crafting still has a lot of bugs in this version so don't worry.

You can save anytime by exiting. If you die, you can start with a new character and go to your old safehouse, and continue your farming work.

Sorry for posting 3 times, I lagged for a few seconds.

Now this is the news I expected, keep up being awesome TIS!

Hi I am new to project zomboid and would like some help. I looked everywhere but im still a little confused.
Ok so I am a Construction Worker with Light Drinker, Short Tempered and Brooding as my bad traits and as my good traits I have Graceful and Stout. My problem is everytime I spawn there is a horde of zombies right outside my house. When I try to crawl out a window a zombie sees me and the horde kills me. Ive tried waiting it out but I run out of food. When I try fighting they bite me. Also the only weapon I ever get is a butter knife and a fork. What do I do?