After 125 days, Arelite Core has been greenlit for publication on Steam. Here's what's coming up next for the game.

Posted by dragonslumber on May 9th, 2015

First, I'd like to thank everyone who voted for the game on Steam. It's always pretty nerve wrecking to go through a process like that, it piles up on all of the other obstacle, so just to know that Arelite Core will have a home once it's done is pretty heard warming.

This actually comes on the heels of a "greenlight premortem" article I posted here just a few days ago, so I wonder if that actually helped me get over the hump. A lot of people seem to have been approved on that same day though so really it's hard to explain "why now". Still, for those interested in that premortem, you can find it at Indiedb.com

I did want to give some stats about the process. Arelite Core was greenlit after 125 days, with 1,029 yes votes, which gave it a 41% Yes ratio. It's hardly the most popular game out there, but considering I'm making a traditional JRPG I'm not really surprised about needing to push harder to sucessfully get through.

The next step will likely be starting a Kickstarter to further promote the game and finance some lingering features, as well as releasing a demo. I actually have a lot of work done for a demo since I did a con a few weeks back, but I need to polish it up to account for non controlled environments. And of course there's more than enough production work to last me until the end of the year

I'll keep posting articles here, but for those who want to stay on up of all things Arelite Core, you can find me at the usual places. 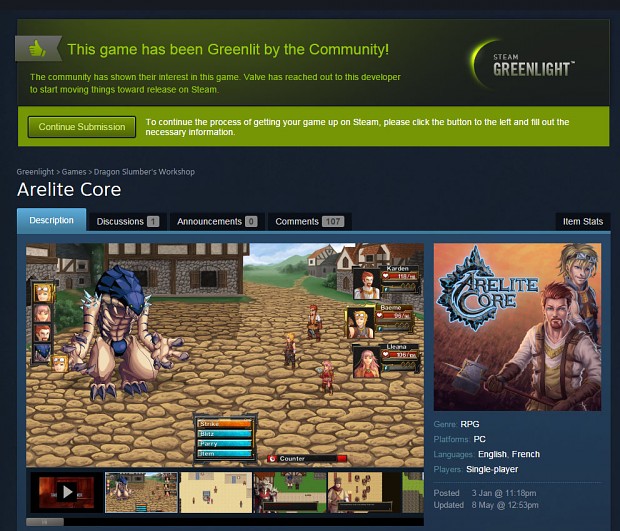