We do not come in Peace. - We come ahead of Peace. - Peace travels with strength.

The Brotherhood of Nod is a mysterious and highly-militant Abrahamic society of allegedly ancient origins,which in modern times began showing the combined characteristics of a vast religious movement, a multinational corporation and a decentralized nation-state, while being none of the three in itself. The globalized brotherhood is led by a mysterious man known only as Kane, and its influence in the world at the advent of the events in which Command & Conquer 3: Tiberium Wars takes place reached nothing short of the status of an unconventional superpower.

The Brotherhood of Nod represents a flexible, elusive and worldwide cultic army which thrives on the sophisticated synergy between low-tech guerrilla warfare and highly-trained forces that are equipped with state-of-the-art communications gear and the most advanced weapon systems available. This technology has been derived from the Brotherhood's uniquely adept understanding of Tiberium-based military technologies.

Nod tactics are highly radical and appear more cruel than GDI's, often showing little to no regard for human life, and their religious fascination with Tiberium also leads them to use the dangerous and toxic substance offensively whenever possible. Nod forces typically are weaker than GDI's or the Scrin in a head-on engagement, yet their use of stealth and advanced hit-and-run tactics to their advantage to control the pacing of the battle, as well as sabotage an opponent's momentum. Their super weapon in the first and third games in the series was a nuclear missile, though in the second it was replaced with cluster and chemical missiles. 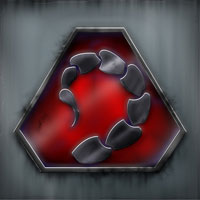 Factions (only in Kane's Wrath)

Marked of Kane:
These cybernetic soldiers of NOD are led by the Nod AI, LEGION. They are a splinter faction in their own right & appear in Command & Conquer Kane's Wrath. They use cybernetic infantry & enhanced lasers & particle cannons to control the battle field. Another strength is that most of their units are immune to mind control by Scrin Masterminds or Cultists. Weak but fast & maneuverable they emphase more offensive than defensive.

its Nod, not NOD, how many times do i have to tell this?! >.< Nod is a name (biblical Land of Nod), while GDI is an acronym (Global Defense Initiative), so NOD would stand for an acronym and not for a name. by saying NOD is like saying "Brotherhood of N.O.D." what are the letters supposed to mean? also, i've seen lots of ppl spelling CABAL Cabal and LEGION Legion. CABAL IS an acronym which stands for Computer Assisted Biologically Augmented Lifeform. LEGION is an acronym too which stands for Logarithmically Engineered Governing Intelligence Of Nod.

its not just for this post, like 3\4 of the world's number of C&C fans writes Nod NOD