Its been a bad summer in terms of releases. We've seen a few betas, and not much else. Well, I now present you with a mod that is going to do more than make up for it!

Let me first brief you on the first Nightmare House. Nightmare House was a brief map with some zombies, a few jump scares, and some average mapping. It had some pretty cool scenes, nice atmosphere, but in the end was pretty pointless.

The Nightmare House Remake was an edited version of the first. Not only was it far better mapping wise, but it now had a few model replacements and actually had a story of sorts. As far as 15 minutes mods go, it was pretty intense. It also included this weirdo girl that I basically thought was a complete ripoff of fear, that appeared to haunt the house. It was a lot of fun. 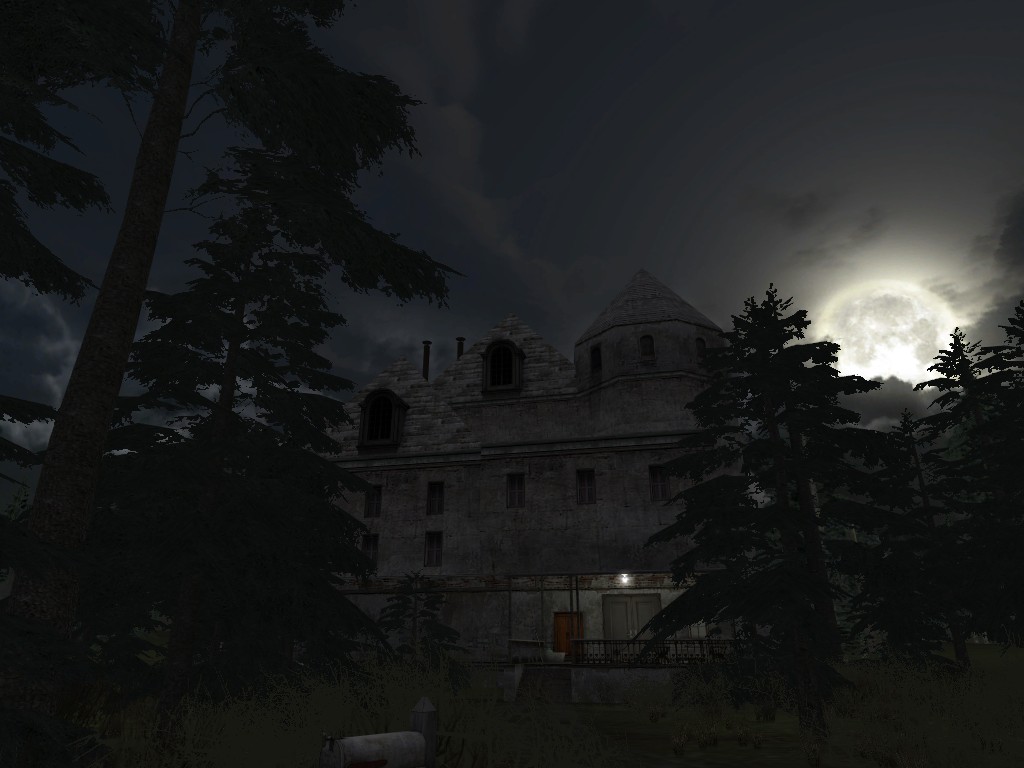 When I finished, I thought it was relatively scary and well mapped. It didnt go much beyond that though.

I've never been a big fan of horror mods or even games, but this made a believer out of me. It has good story, gameplay, mapping, and models. I think its time we dive right into Nightmare House 2!

MAPPING:
The mapping is some of the best Ive ever seen. I dont want to spoil anything for you, so I cant use any screenshots of the really impressive maps. What I can basically say is that the maps make the mod just as scary as the enemies and story; They are atmospheric, easy to understand, and fun. Its not like other games where you feel like you are just locked inside a windowless box, made purely to cause you misery. It makes you want to explore the hospital, not go jump out and walk around outside. 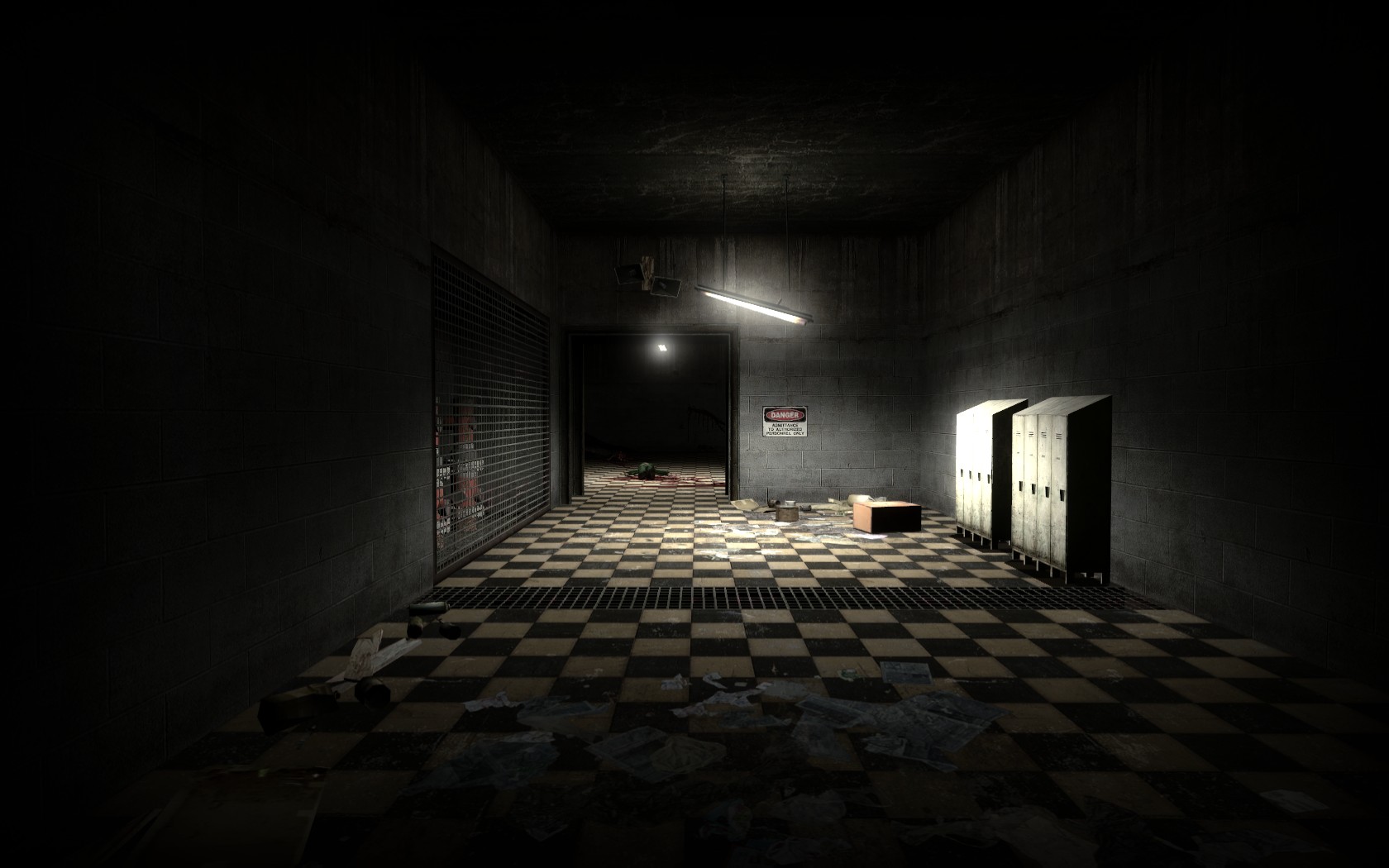 The mod's maps are constantly detailed to the last degree. Very enveloping and believable.

CUSTOM CONTENT:
The custom content in this mod is detailed and well-made. Not to mention theres a shitload of it! If custom content makes your day, you're going to love this. New props are all over the maps, and custom skins litter the hallway, usally moaning. Everything is top notch when it comes to the models. Yet unfortunately, the weapon models are not theirs and have been used over, and over, and over again. Still better than nothing in my opinion though. 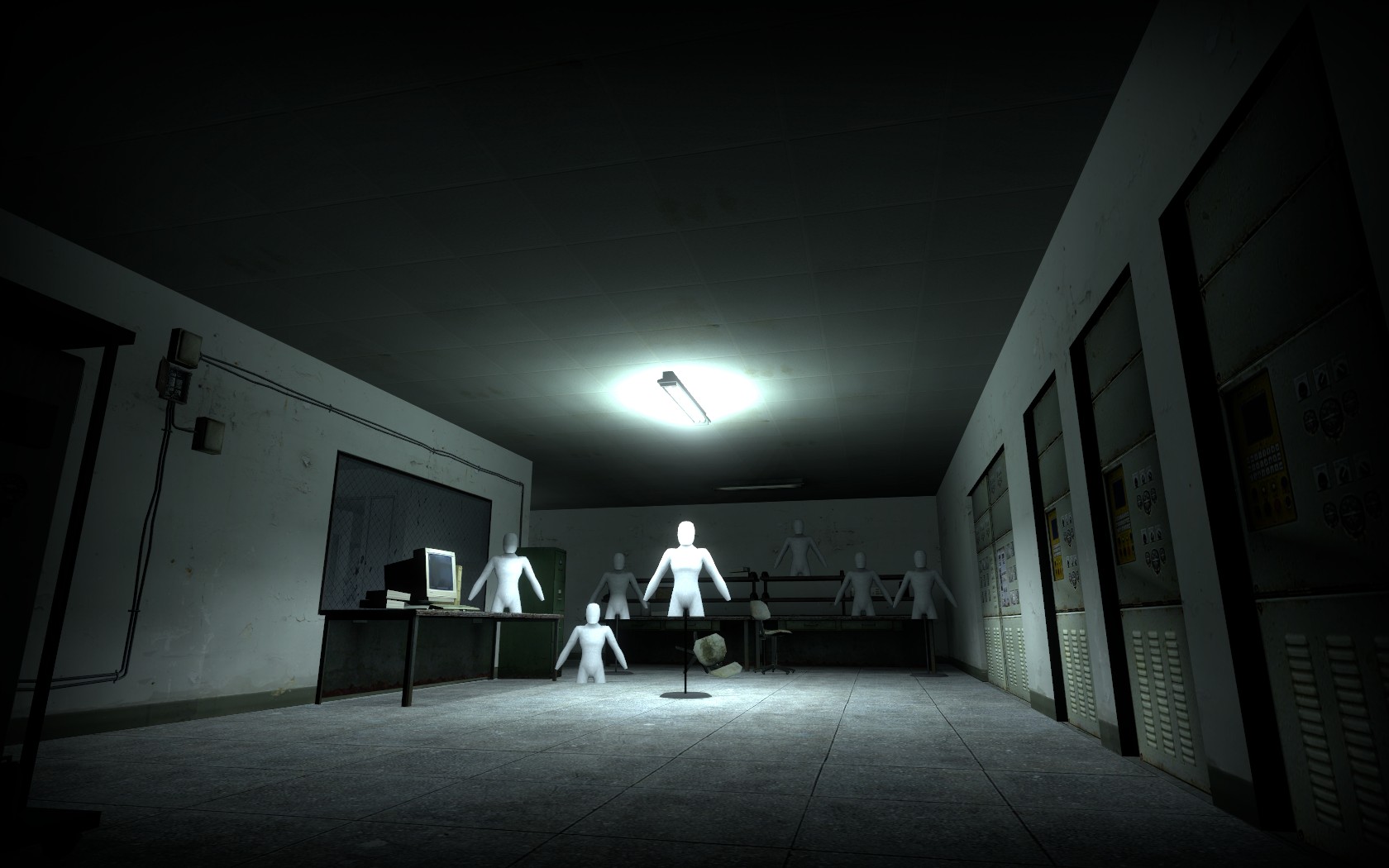 When I approached this mod, I really didnt expect a story. Or at least a good one. I expected the same "Evil girl messes with you and nothing else" the whole way. I was wrong. While she does mess with you a bit... 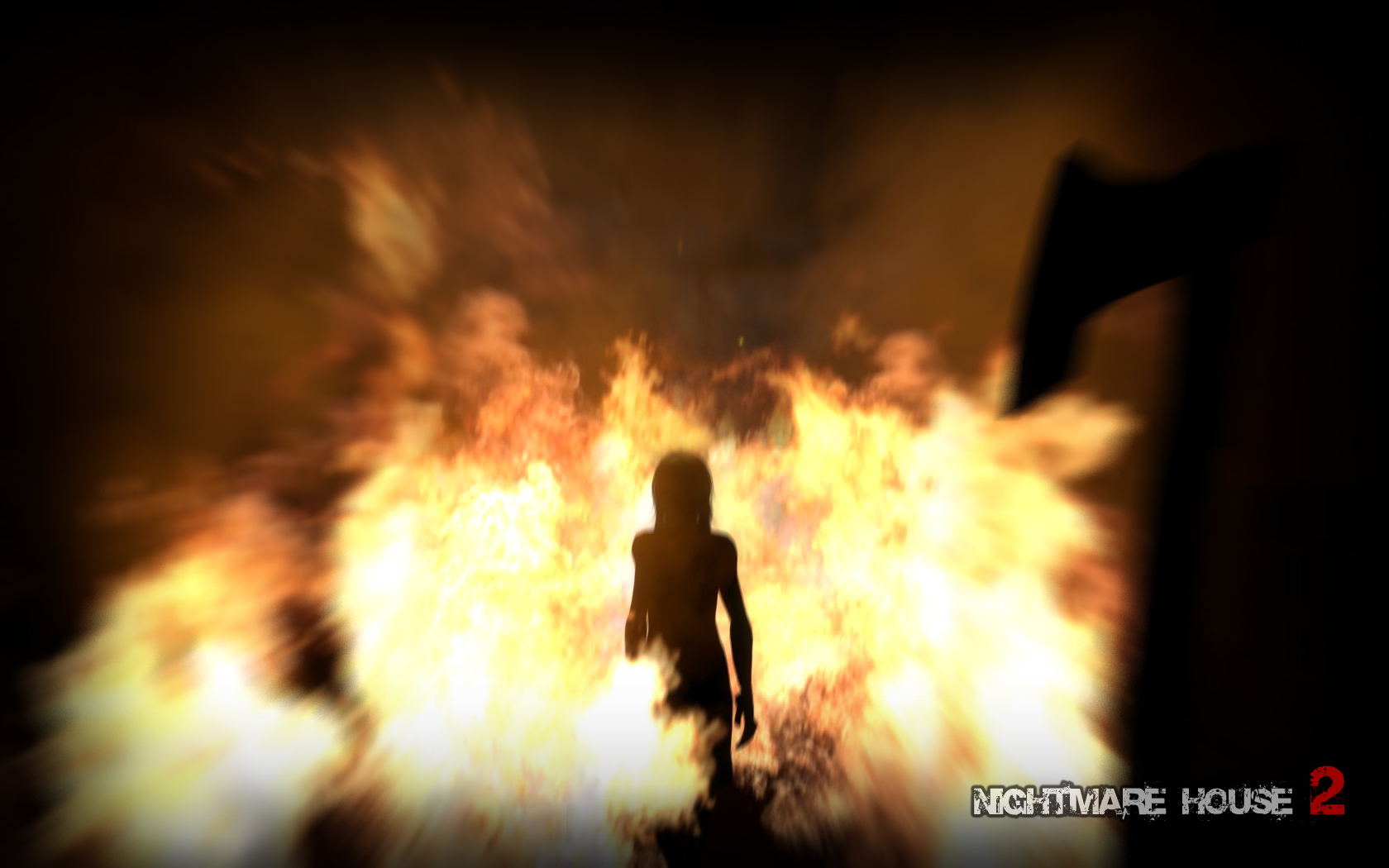 Okay, a lot, she's not the whole mod. Various characters are introduced to the madness, and the best part is that they're not all mad. The storyline twists and turns, keeping you genuinely interested in the mod the whole time you play it. The best part about it is that it actually is original! Yes! This is not a cheesy knock-off of another game or mod. It does take a lot of inspiration from the Fear series, but that really doesnt show once you get involved in the story presented. The one problem I can really see is that several parts were a tad bit predictable, though not very often.

Alright. Best for last. How should I say this? The mods gameplay is downright AWESOME. Let me first touch on the combat itself. Unlike some horror games and mods, this doesnt try to create fear through overpowered or overwhelming enemies. The atmosphere surrounding you is enough to make you almost shit your pants. The enemies include nurses, doctors, workers, patients, weird skinny things that scare the shit out of you, and more. Its terrifying on its own. But thats not what REALLY made the gameplay for me... 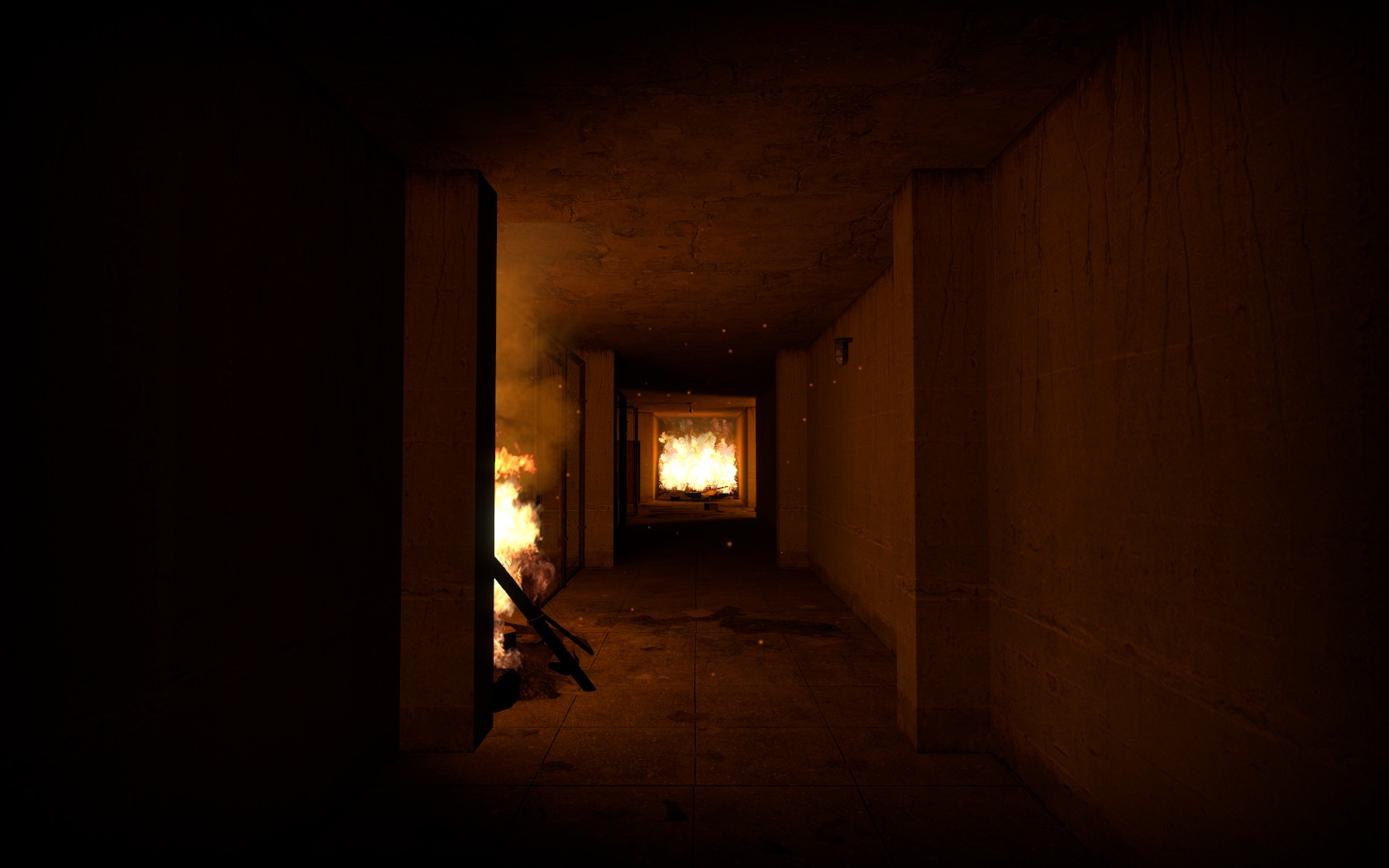 What made the gameplay for me is what happened when you werent blowing away enemies. Some of it was just atmopshere, effective lighting, and some nice new models. But let me tell you; its the timing of events that REALLY scares you to death.

You DO NOT SEE THINGS COMING. Ive played a few horror mods where I was about to step into a room and said "cue falling body with creepy music", and guess what happened. This DOES NOT HAPPEN. You dont expect the enemies suddenly spawning behind you, or the bodies drifting in the water, or the creepy sound clips coming. Just when I thought "Theyre going to use this trick one more time!", it changed.

Not only that, but they have a seriously cool trick that mustve taken ages to get right. There are several hallways and vents that are made to disorient you, and thats exactly what they do. Certain areas seal off or open up behind your back, and you never see it. It makes you really think you're going mad for a bit.

It basically has great timing for everything, along with a really nice soundtrack. I think its the most intense, interesting gameplay Ive ever experienced. 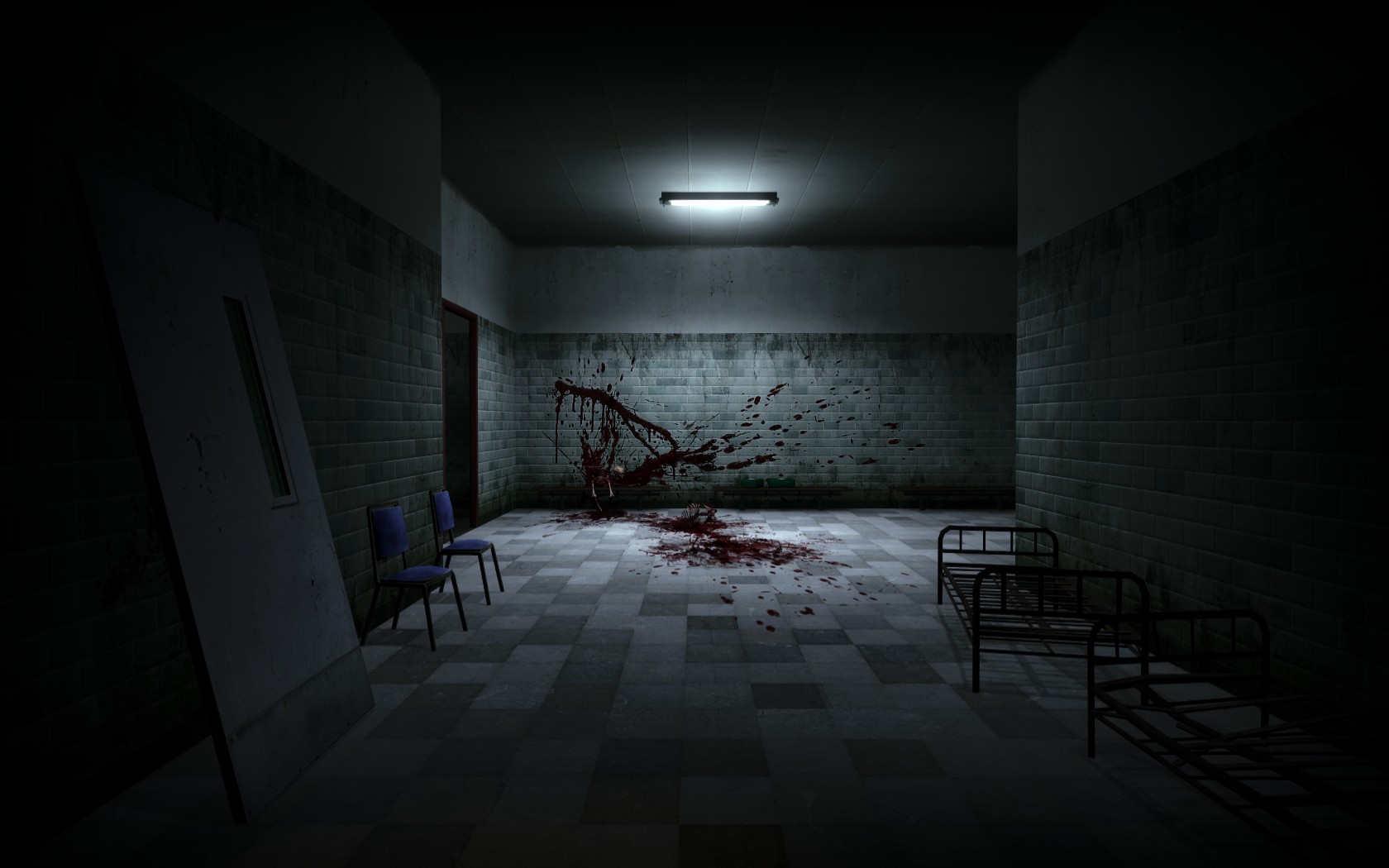 In all, this mod was damn brilliant. If you havent played it, download it right here: Moddb.com as soon as you can. A seriously cool mod that must be played.

Nice but im not a fan of horror mods

Start menu? Why would a start menu bother the mod? You can open up steam elsewhere. :D Or use a Mac if mods work on macs...

I finished it before him, AND I had to help Raider finish this :p

4-5 hours gameplay to round you up, looking around your back.

Yeah, you helped me at ONE PART!

What you mean " helped you " Raider, your a pro man ! Did you get lost in the dark and scary waiting room ? Ha !

Excellent review by the way sir. Does the mod some fine justice.

Nah, he just helped me figure out what to beat with a crowbar near the end.

The rest of the game he was scared of me trying to spoil the ending to him ;)

Yeah, but thats not helping xD

I found this mod pretty nice, although yes, there where some predictable parts, but not a lot. But that whole dark edge in the corner of the screen made it even more scary. Probably that's the reason I played Dead Space so bravely, it had a more open view of the things in front of you.

But I had to use some music to lower my pressure playing this mod XD Mostly "happy songs". Played around 2 chapters with "Do the hustle" in the background :D Much like the "Shephard's Mind" guy: Youtube.com

Oh stop it man ! That's like people who cover their eyes at scary movies. You miss all the best stuff ! ;)

I dont blame you. That was one damn scary mod lol.

I have to admit that this is the first HL mod I've played since spring and I honestly haven't been this impressed since " Minerva - Metastasis ". I'll be dropping a short review of my own after I play it once more :)

Excellent, looking forward to it :D

Have you find the Easter eggs? I didn't noticed this game has that many :D

As I played this mod, I suddenly called it the "Research and Development" or "Minerva - Metastasis" from 2010.
And, it was that awesome, if you have some free time to spare, this should be your first choice!

I agree. Mod of the year!

Defintely a work of pure art, I especially give praise to the gameplay, they didn't throw masses of enemies at you but they certainly didn't throw no enemies at you. The only faults I saw was the boss fight and the timing of a few events(shooting the soldier). But everything else was a model for perfect game design, a modicum of fear still persisted for me even at the very end. Normally most mods would have beaten the fear out of you by then.

Yeah, they managed everything with perfect balance. A really well planned mod.