Here comes a new open beta release of "Phase 2". It includes a new soundtrack, including the game's very own theme song, redone and added sound effects, new features like the AI builder and lots of minor improvements and fixes.

Posted by SaschaWillems on Jun 1st, 2013

After almost two months of work (with a small pause caused by a dead power supply), here comes a new Phase 2 beta release (#190): 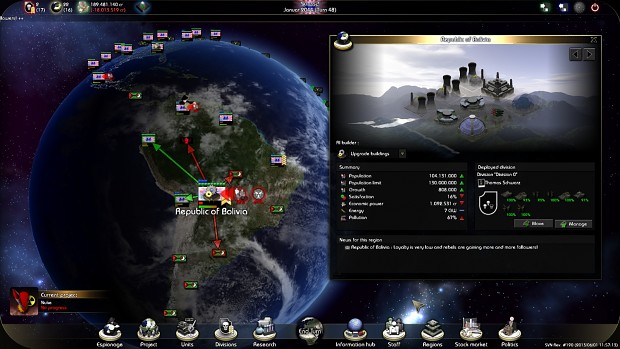 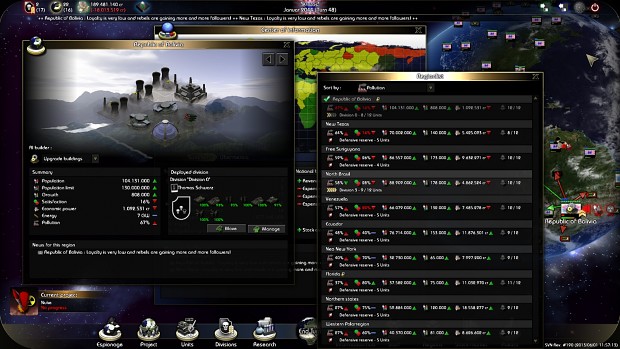 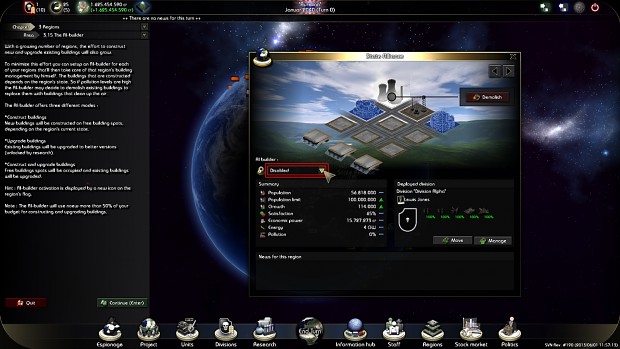 Thanks to the all new soundtrack and the new and improved sound effects, the game feels even more polished now with an almost perfect atmosphere from what I always wanted the game to be.

Next on the list are sound effects for the battlefield, with separate sounds for all the different military units and adding the missing features. Right now the politics feature hasn't been implemented (it partially is there, at least in the game's code but not visible for players) yet and the game is still lacking some of the game modes I had in mind, as well as the modificators for the game modes. So that's next on my list.

So have fun playing and keep providing me with feedback (which so far has been very positive), cause that's my main motivation :)

P.S. : I've been thinking about putting the game on desura (for free), any caveats on doing so for a game that's still in beta? Or would it be better to wait for a final release before putting it there?

Looks like a spreadsheet. Going to try it out.
:B

Have some quick feedback on bugs/issues:
*Rendering is halted - the screen freezes - while moving the mouse during the faction selection screen.
*Cancelling (demolishing) unstarted constructions yielding only a partial refund seems off for a TBS game.
*Region overview sorting list should mirror the table columns
**The sort by economic power does not work correctly
*Font legibility - and thus readability - is bad.
*The region construction screen looks like this [IMG]http://i42.tinypic.com/34iq0is.jpg[/IMG]
It also obstructs some statistics at the bottom left. Using a 7300m Radeon mobile graphics - since the alpha issue might be due to that.

Won't whine about the UI, because I can whine a lot about an UI.
Will revisit it next weekend as I was impressed by what I saw.

*Rendering is halted - the screen freezes - while moving the mouse during the faction selection screen.

I actually thought to have fixed that bug with the current release. But it seems several graphics cards still have that problem. I'm doing offscreen color selection, and maybe your graphics card has performance problems with that or something in that code causes software rendering.

*Cancelling (demolishing) unstarted constructions yielding only a partial refund seems off for a TBS game.

Why? My intention on this was that you partially harvest materials etc. from the demolish process, so refunding the full price or nothing at all would seem odd to me :)

Yes, it's not perfect yet. But remember that it's still a beta. I'll take a look into this for the next release.

Depends. How big is the display you're playing on? I know it's kinda hard to read on small mobile displays, that's something I'm aware off and I'll see how I can change that.

*The region construction screen looks like this [IMG]http://i42.tinypic.com/34iq0is.jpg[/IMG]
It also obstructs some statistics at the bottom left. Using a 7300m Radeon mobile graphics - since the alpha issue might be due to that

What drivers are you using. Have you tried updating them? It clearly looks like the driver doesn't support alpha for frame buffer objects, thus the black background of the cityscape.

And thanks for playing and returning feedback :)