The areas where the Weapons of Mass Destruction where tested.

Area 1 — As a part of the Nuclear Test Zone, this area occupies 70 km2 (27 mi2) near the center of the Yucca Flat weapons test basin. Four atmospheric nuclear tests were conducted here between 1952 and 1955. Three underground nuclear tests have also been detonated in Area 1, one in 1971 and two in 1990. The U1a complex (formerly known as the Lyner complex) is a mined underground complex in Area 1 that is available for dynamic experiments (including subcritical experiments involving special nuclear material) and hydrodynamic tests that cannot be conducted aboveground because they may contain hazardous materials. Initial work on what later became known as the Lyner Complex began in the late 1960s with the mining of the U1a shaft to a depth of 305 meters (m) (1,000 feet [ft]) for a nuclear test. It was not used. Further work took place in the 1980s and early 1990s to develop a complex that could be used to perform intentionally designed low-yield tests or experiments, which included safety tests, and other experiments that would be expected to remain subcritical or produce negligible nuclear energy release. The Ledoux nuclear test with a yield of less than 25 kilotons was conducted in 1990 in a drift within this tunnel complex. The Kismet experiment, involving high explosives, tritium, depleted uranium, and other materials, was a dynamic experiment conducted in the Lyner Complex in March 1995. Both Ledoux and Kismet were contained to prevent radiological releases to the rest of the Lyner Complex and the surface environment. The Area 1 Industrial Complex, at the intersection of Pahute Mesa Road and Tippipah Highway, is the maintenance and storage area for an over $20-million inventory of large-hole drilling equipment and miscellaneous supplies. Typical day-to-day operations include replacing worn cutters on a drill bit with new or rebuilt cutters, straightening drill pipe and tubing, and other drilling tool maintenance tasks. A concrete batch plant and storage area for bulk construction material, as well as a shaker plant that produces stemming material and concrete aggregate, lie to the north of the drilling yard.

The U1a Facility is an underground experimental complex at the U.S. Department of Energy's Nevada 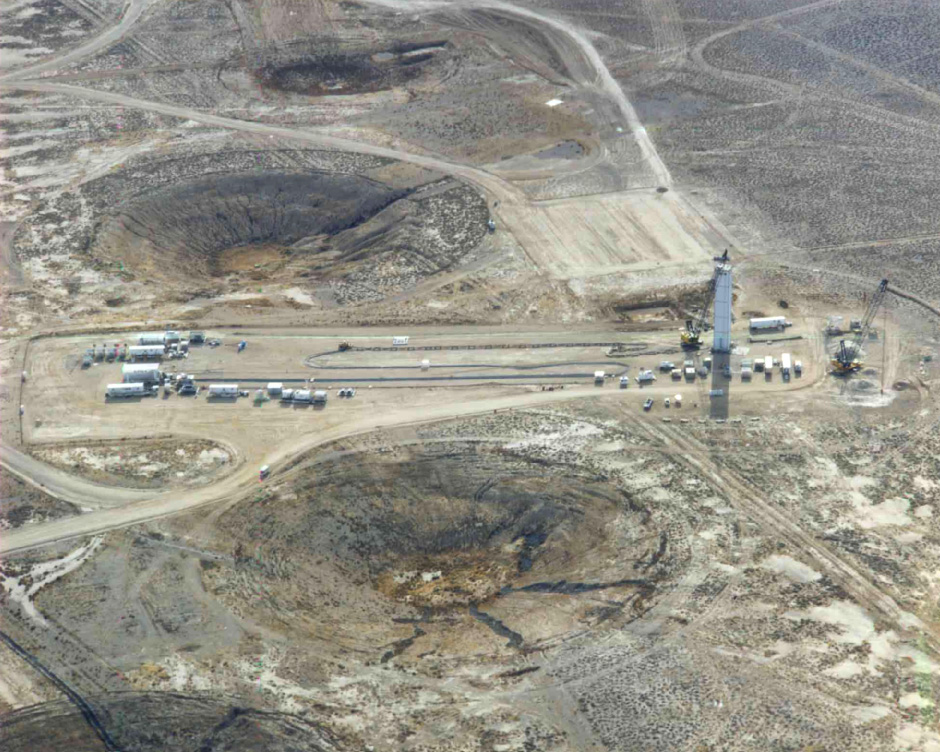 Test Site. The U1a complex supports routine test site activities in which high explosives are detonated to test the readiness of equipment, communications, procedures, and personnel. Test data will help maintain the reliability of the nuclear weapons stockpile by allowing scientists to gain more knowledge of the dynamic properties of aging nuclear materials. Of particular interest is data on the behavior of plutonium that can be used in computer calculations of nuclear weapon performance and safety in the absence of actual underground nuclear testing. The complex is located in Area 1 of the Nevada Test Site, approximately 90 miles northwest of Las Vegas. The complex, consisting of horizontal tunnels about one-half mile in length mined at the base of a vertical shaft approximately 960 feet beneath the surface, was mined in the late 1960s for an underground nuclear test which was later canceled. In 1988, the shaft was reopened, and a 1,460-foot horizontal tunnel was mined south at the 962-foot level of the shaft. In 1990, the Ledoux nuclear test was conducted in the tunnel. The vertical shaft is equipped with a mechanical hoist for personnel and equipment access while another vertical shaft about 1,000 feet away provides cross ventilation, instrumentation, utility access, and emergency egress. On the surface, there are several temporary buildings and instrumentation trailers. The most distinguishable landmark at the complex is the white air building which was used for experiment assembly during Ledoux.

The underground complex consists of several main tunnels (called drifts), each about one-quarter of a kilometer long, and a series of small experimental alcoves branching off from them. The alcoves are also called zero rooms, from the "ground zero" parlance of the nuclear test era. The downhole environment is surprisingly comfortable, with well-lit rooms, concrete floors, tall ceilings, and lunchrooms. Both Livermore and Los Alamos have designated testing areas in the complex. Los Alamos scientists conduct experiments about every 15 months, while Livermore currently conducts its tests every six weeks, thanks to the use of expendable steel vessels that confine debris from the experiment.

In 1996, Lawrence Livermore started mining its first downhole experimental area, called the 101 drift, using the same mining techniques as those for subway construction. The drift and three small experimental alcoves were completed about 10 months later. The mined areas were stabilized with 5-meter-long steel rods drilled into the tunnel walls, secured with epoxy cement, and sprayed with a slurry of fibercrete, material similar to concrete. The Holog, Bagpipe, and Clarinet test series were all conducted in their assigned alcoves, which afterwards were permanently sealed.

Area 2 — This area, within the Nuclear Test Zone, occupies approximately 52 km2 (20 mi2) in the northern half of the Yucca Flat basin. The eastern portion of Area 2 was the site of seven atmospheric nuclear tests conducted between 1952 and 1957. The first in a series of underground nuclear tests in Area 2 took place in late 1962 and continued through 1990. A number of the 137 underground tests detonated in Area 2 were simultaneous detonations of multiple devices in the same emplacement hole; other underground tests involved the firing of two or more devices with the devices in separate emplacement holes. Most of the structures that comprised a former construction base camp (consisting generally of Butler buildings, Quonset huts, and trailers) have been relocated to Area 6, and the facilities remaining in Area 2 are in the process of being moved to other locations or are being scrapped.

Area 3 — This portion of the Nuclear Test Zone occupies 82 km2 (32 mi2) near the center of the Yucca Flat weapons test basin and was the site of 17 atmospheric tests conducted between 1952 and 1958. A total of 251 underground nuclear tests were conducted in Area 3 from 1958 through 1992. This is the largest number of tests of any of the NTS underground test areas. A number of these tests consisted of simultaneous device detonations, and nearly all of these simultaneous tests consisted of single devices in separate emplacement holes. Nine of the underground nuclear tests in Area 3 were conducted in unstemmed holes to minimize, but not eliminate, the release of radioactivity to the atmosphere. These unique tests were carried out between mid-1957 and late 1958. Bulk low-level waste is disposed of in selected Area 3 subsidence craters that, collectively, comprise the Area 3 Radioactive Waste Management Site. This activity commenced in the mid-1960s when the DOE began removing scrap tower steel, vehicles, and other large objects that had been subjected to atmospheric testing. From 1979 to 1990, large amounts of contaminated soil and other debris from the NTS were added to the craters. There are seven disposal craters. Two craters are in use, two are full and temporarily capped, and three are in reserve for potential future use.

NTS Also known as Area 51, is used a lot for Aircraft testings and research.