And other changes to the upcoming open source strategy game Black of Space.

Posted by masternerdguy on Sep 7th, 2010

Unit Behaviors
Before, you could only group units into fleets and specify their attack style. While that's fun and all, it was rather dull considering the customizability of the units themselves. So, I have begun adding new options! 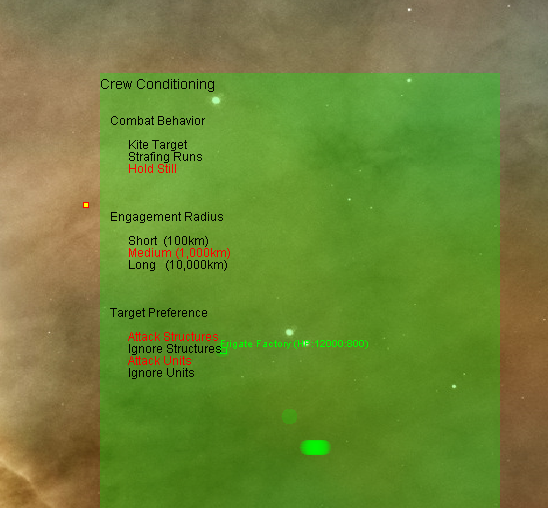 As you can see, you can now specify engagement ranges as well as what kind of targets may be attacked. The target preference is great for creating fleet members who's only job is to attack enemy structures, or only to fly cover.

The red indicates the option is selected, which removes the need to have all of these options listed in the unit context menu.

The Distance Readout
While I'm talking about UI enhancements, let's look at this nifty little feature: The UI distance to target readout. 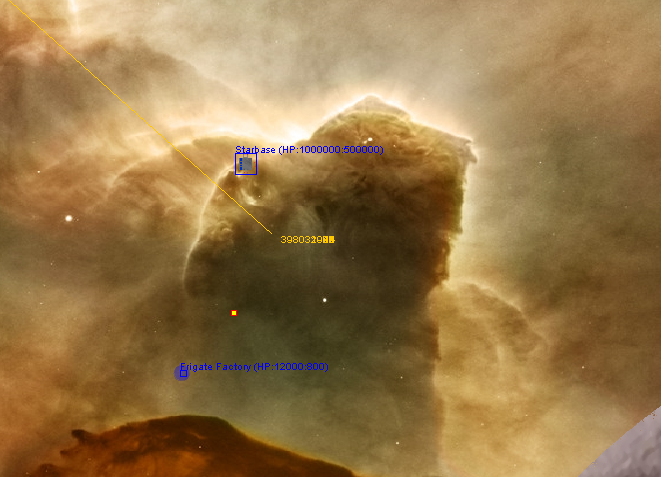 Simply put, this counter is the distance in kilometers a unit is from its destination. It's great for knowing when a fleet will arrive at the coordinate you specified and avoids randomly zooming to try and see how far away your ships are.

Working Missile Batteries
I finally got around to making the missile battery defensive structure actually work! 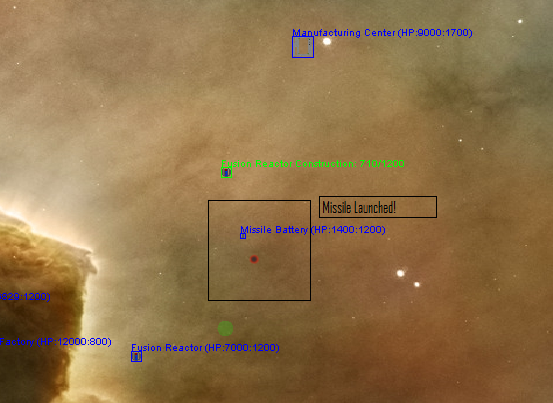 Now these structures are cheap and effective support structures, however they do have a catch: They will seldom hit anything moving faster than 100km/s (Frigates and cruisers can routinely reach 400-600) unless it has been tackled. This means that you cannot rely on your base defenses to guard your base permanently, merely to stall enemy attacks.

The reason for this is the "deathstar" mentality. In games where you can anchor defensive structures, players tend to anchor the most deadly and most powerful. They also tend to anchor as many as possible. I want the player to actually build and manage support fleets and defensive fleets.

Passive Repairs
Structures can now passively recover shield and hull, not at a rate that allows it to turn the tide of an engagement, but enough for the base to repair itself after the battle has been won.

Fancy(er) Explosions
Explosions used to be always yellow and tiny. Now, they can be yellow, red, white, and have sizes ranging from the tiny poofs from a missile hit to an exploding structure. While they are still simple and monochromatic (they are just an expanding oval), the overall appearance has improved.

Comments
Please send me feedback either at ModDB or masternerdguy@yahoo.com . The game is coming along nicely and an alpha is expected before Christmas. So, if you have an idea, now is the time to present it.

Looks nice and in-depth. I like it. In general the game seems to be coming along quite nicely. Good work and keep it up.