An overview of the main features in the next update of the Modern Warfare mod.

It has been a while since the release of Beta 5.1, hopefully you are all enjoying that release. In the meantime the team has been working hard to deliver the next update to Modern Warfare Mod.

Beta 6 will be the largest and most extensive update for Modern Warfare, many aspects of the game will change and more action will be introduced into the game. Here is a list of the main features of Beta 6:

As with all previous versions Beta 6 will unlock the next bookmark for you to play with which starts at 2008. In response to an invasion by Georgia into South Ossetia Russia is quick to respond and sends its own military to drive back the Georgian forces, which side will you pick and what will the outcome of this war be in your game? 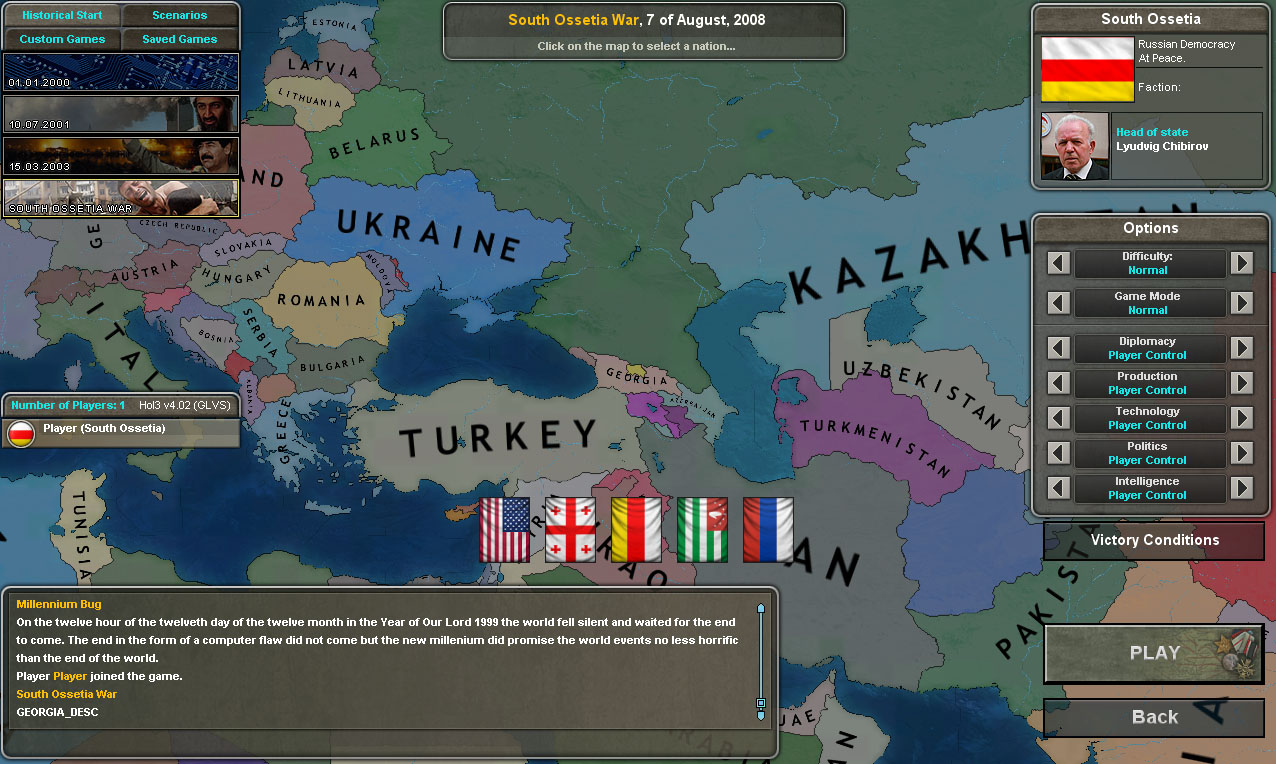 To make the war as accurate as possible the map of the Caucasus region has been reworked and missing countries have been added such as South Ossetia and Nagorno Karabakh. Georgia itself has received a welcome addition of provinces which it can use to delay the Russian advance. 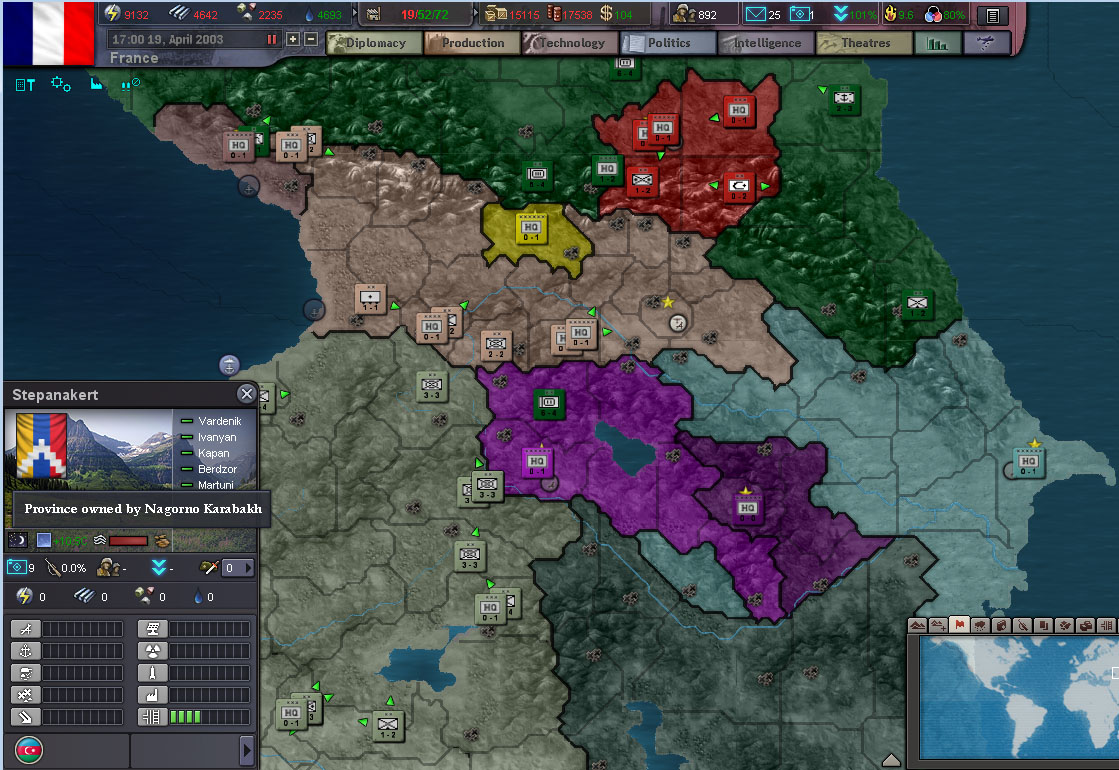 Each of these countries in the Caucasus will have all of their historical ministers added and perhaps some leaders as well.

The voting process for the European Union has been altered and now splits into two main categories: Treaty voting and Policy Voting.

Treaty voting is used when voting on treaties that reform the entire EU such as the Nice Treaty or the 2003 Treaty of Accession. This type of voting requires ALL members states to agree and sign the treaty, if one member opposes the treaty and votes against it the treaty will not pass which could potentially stop or delay the enlargement of the EU. 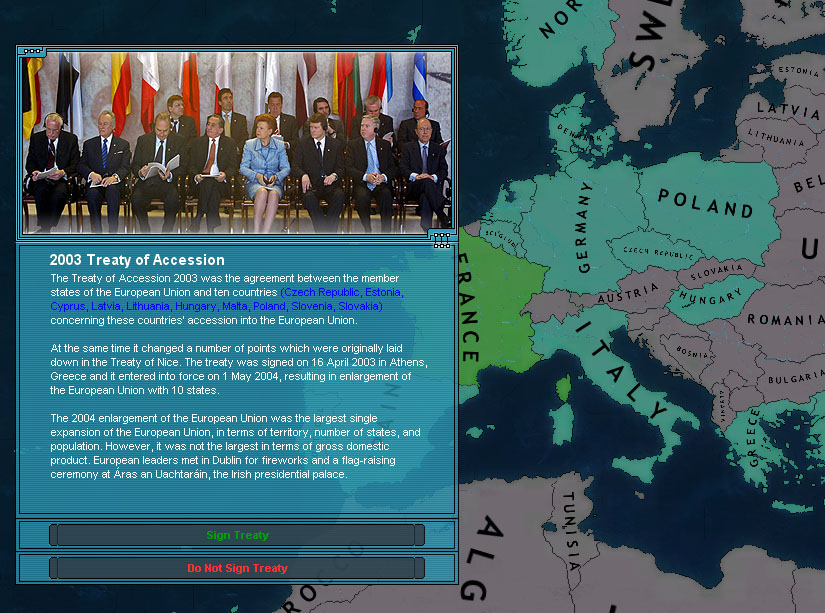 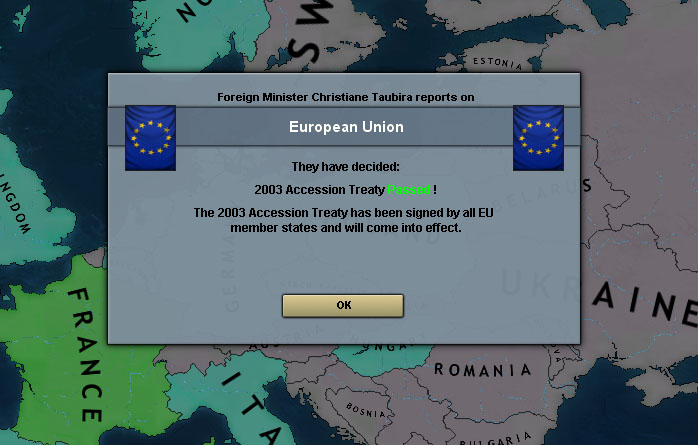 Policy voting is used when voting on general policy of the EU outside of its borders such as a decision to impose sanctions on another country, these votes require a regular majority so if most EU member states support imposing sanctions on a certain country the decision will be passed and that country will have its relations with all EU members reduced to the level it can't trade with them (it becomes too expensive) and will will receive a modifier damaging their income.

3. Improvements to existing and new OOB's (orders of battle)

Beta 6 will add as well as improve the OOB's added in Beta 5.1, the main improvement will features models for the these countries: France, Germany, United Kingdom, United States and Russia, here are a few shots to show how they will look in game.

Please note these images are work in progress and do not represent the final result! 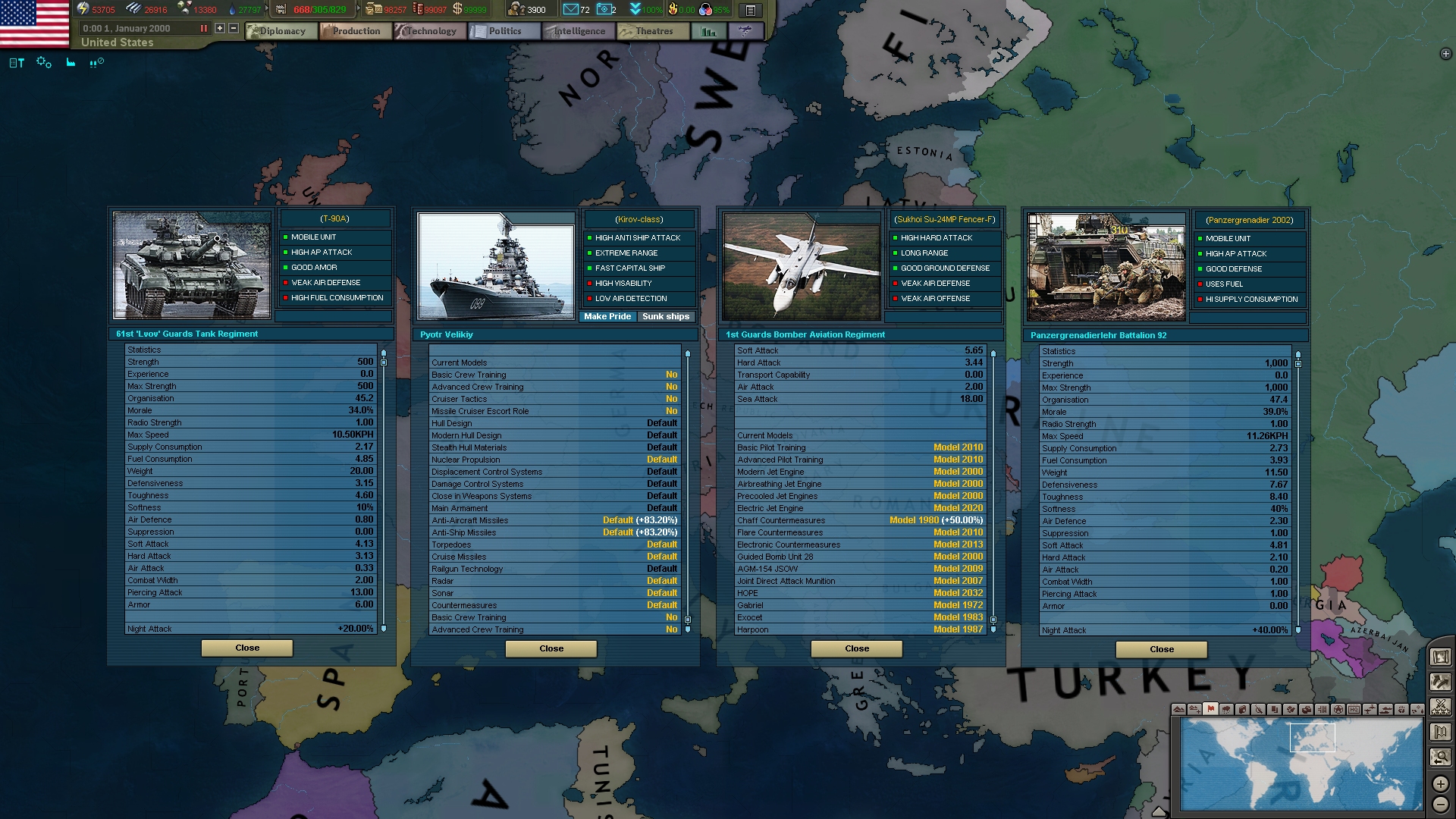 As you may have guessed from the screenshots Beta 6 will introduce changes to the vanilla graphics in many areas and this will continue until the entire game has been adjusted to the new modern look of the mod.

There have been changes done to the tech tree of the mod as well as balancing for existing units, some new units have been added as well - you will have to discover those for yourself :)

That is all for now, more preview will follow as we get close to release, much work is still to be done for Beta 6 but I have no doubt this will be our most stable and content rich release to date, thanks to everyone who supports the mod and keep spreading the word regarding Modern Warfare.

Please note that we are aware of the RAH-66 Comanche is used as a pic for a HQ unit, no it will not be like that in the final release. We just wanted to show of a really cool picture. Even though the RAH-66 Comanche program was cancelled by the U.S Department Of Defense, we want to have the largest possible model diversity in our mod and come on, it looks great, doesn't it? ;) As these models are just previews it's not a garauntee that the T-90A will show up in the beginning of the game, so please keep in mind that we will fix model settings for each major OOB in game.

This is really just cementing my desire to reinstall HoI 3 again when I've got space on my hard drive. I bought Supreme Ruler Ultimate in an effort to get a modern HoI, but I think you've outdone them from what I've seen.

Why is Kosovo an independent state in 2003 when it only declared independence in 2008?

Kosovo is under UN administration from the beginning of the game due to this: En.wikipedia.org

But it sayed a part of Yugoslavi, SCG and later, Serbia until 2008. And it's independence is contraversial even today.

Bottom line is that Serbia did not administer the region and did not have de-facto control over Kosovo.

Despite its independence being controversial the mod places an emphasis on de-facto control of regions which is why places like Northern Cyprus, Abkhazia and Nagorno Karabakh exist as "independent states".

Ok, I would occupy it anyway.

Hmm yeah, your occupation may be very short.

Do you have an idea of when Beta 6 might be released?

Is there any way for this mod to work for hoi3 vanilla on a mac?

are you goind to add ISIS and arab-israel conflict ?

ISIS will be included fully in the mod.

The Israeli-Arab conflict not so much since there aren't many provinces to work with in that region. But there will be general events on that subject.

And what about the repuplic thrace, and donbass?

Republic of Thrace? Never heard of them until now. And, donbass wont be included until the mod developers get to that point.

The Provisional Republic of Thrace only existed for a few months, that was over a century ago. Since this is the Modern Warfare mod, I highly doubt they will include it.

Let's not get carried away... this is one mod that won't have Byzantium in it as well.