Crashlands plays host to a bevy of crazy races. Take the first dive into the lore of this strange planet with the Tendraam, a race of furry, goatlike zealots!

The Tendraam are a highly superstitious race of flying, furry goat people. Their horns and hooves resemble roots and leaves for camouflage, while their brown fur has varying hues from brownish-green to orange to better match the landscape of the Savannah (and avoid the many predators that make their home there).

The likeness of Tendraam horns and hooves to plants has given rise to their deep belief in a plant-based god, whom they refer to as Maarla. Maarla does not appreciate having her plants trod upon, so Tendraam take great care in not touching the ground. They fly about for most of their adult lives, flitting just slightly above the ground.

Tendraam are not particularly intelligent. Their deep belief in Maarla has led to a dualistic understanding of the world - the Tendraam understand things in only two categories: Sentients, and Plants. Anything that touches the ground is a Plant, and therefore a sacred expression of Maarla. Anything that does not (including themselves) is a sentient, and should strive for Plant-like purity.

Flux’s crash from space onto Woanoap causes the Tendraam to view her as a transcendent of sorts - since she was once a Sentient (airborne) but has somehow become a Plant. They believe that Juicebox, Flux's robot sidekick, is the Sentient disciple of Flux, an everliving servant and worshipper. This causes the sassy Juicebox no shortage of annoyance. 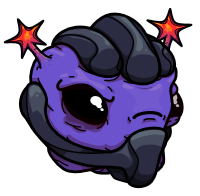 Q, the game's villain, is viewed as the antithesis of Maarla - he is a 'devil' of sorts to the Tendraam. Q floats, is therefore Sentient, but has no reverence for any Plant, as his mass destruction of anything that annoys him attests. The Tendraam fear him greatly and wish to push him out of the Savannah. Flux’s arrival makes them excited for this possibility to become a reality.

The Tendraam can be found gathered around “Expressions of Maarla” - rare plant life or plants that are growing in inappropriate places. They also setup sites of worship using their grown lamps, and by coaxing massive Lightroots to the surface with a yet undocumented power.