Marketing and promoting an Indie presents some major challenges. Like a BASE jumper, we hurled ourselves at the task, armed with Parachutes made from boxer shorts. Read on for tips and ferrets...

One day Danny B watched this BASE jumping video featuring some insane jumpers in wingsuits, flying within a nose-hair of a cliff face at 150mph. From that day on, Dejobaan games would never be the same.

We knew it was our duty to enable the world to experience the rush of BASE jumping, but with a Dejobaan twist. Hence, the concept for Dejobaan's newest title, AaaaaAAaaaAAAaaAAAAaAAAAA!!! -- A Reckless Disregard for Gravity was born. Our first step was to get the word out to as many gamers as possible to see if our idea appealed to them -- it was simply too crazy to keep locked up in our tiny Watertown, MA location. But how could we get the word out? How could WE, a small indie studio, possibly accomplish that feat? 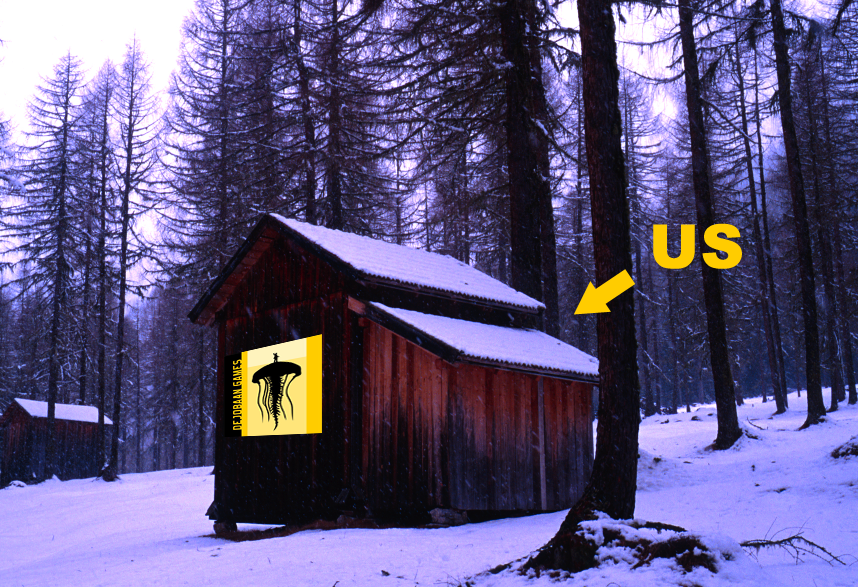 Our first challenge: we we sportin' a bank-busting budget of $0.00 for promotion and marketing. Given our fantastic concept, we had to get an attack ferret to keep the banks at bay. We set out, ferret in arm, to build awareness for the game, knowing we had to somehow swim above the the sea of ads and PR from AAA studios. We sent our ferret out to search for contacts at every major and minor gaming press outlet. Daisy (that's our ferret's adorably threatening name) came back with a list of email addresses and a hairy arm full of press contacts. 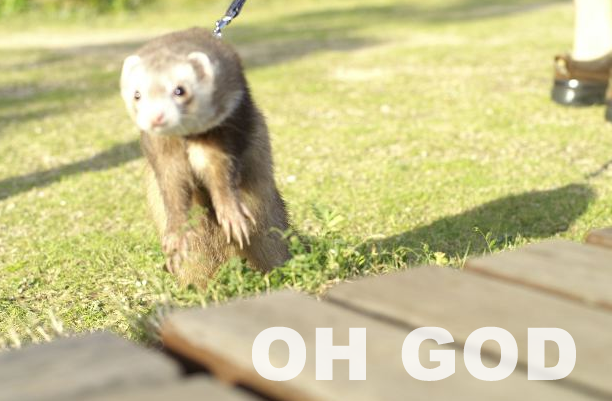 So with this list of email addresses we were ready to start our own Nigerian cash-scam. Back in reality, we had to find a way to get the press to take notice and actually write about us. We couldn't compete directly with the big studios' fancy ad campaigns and teams of PR "experts". Instead, we had to go 90 or 180 degrees in a different direction. If they were talking about realistic graphics, we would talk about hyper-unrealistic graphics. If they were trying to please everyone with a nice PG-13 message, we were going to be outrageous and get everyone to talk about how much they loved or hated us. We knew we couldn't write a boilerplate, boring press release. Starting with the title, everything had to be exciting, shock inducing, or just plain insane. Our goal was to leave the press feeling overjoyed, appalled, incensed, or otherwise compelled to write something about the game.

With that in mind, the Dejobaan team started tossing out names for this future game... Low Altitude? Blah! No way. Deploy Parachute for Hot Chicks? It would have opened more doors to put hot chicks in the game, but we weren't moving in that direction at the time. Falling Toward Earth? Too straight forward and boring. AaaaaAAaaaAAAaaAAAAaAAAAA!!! (Oh #@!& I'm Going to Die!)? The second half made it seem like that it was impossible to survive. But that Aaaaa! part was interesting.

AaaaaAAaaaAAAaaAAAAaAAAAA!!! -- A Reckless Disregard for Gravity 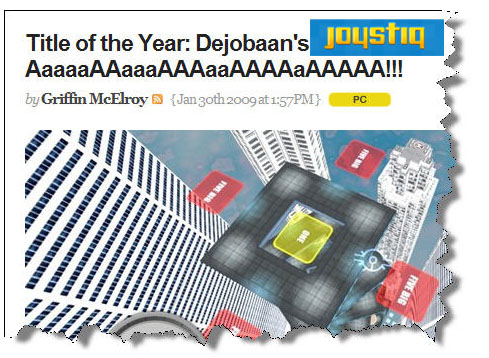 We had two goals for our press release. First, it had to be just as moving as the name. Second, the press should be able to just copy and paste our press release and have an exciting story! The easier we made it for them to write about us, the more we increased the likelihood that they would do so. With that in mind, we began fabricating a press release that was rich with imagery. As Founder Ichiro Lambe always says,"Show, don't tell."

The first paragraph had to convey the speed, the rush, and the extreme aspect of BASE jumping:

You dive off a skyscraper, relying on quick reflexes to negotiate the intricate tangle of girders that make up the City. You perform aerial stunts at terminal velocity before parachuting into the arms of your cheering fans. While other skydivers have it easy, you have to earn the adoration of the crowds by gliding within an eyelash of that glass super skyscraper at 70 miles per hour.

In the second paragraph we went for shock value:

BASE Jumping (short for Building, Antenna, Span, Earth) has never been a sport for the masses -- it's too dangerous, and it's tough to get permission to jump off of the Burj Dubai. That all changes when Dejobaan Games brings its own wonderfully twisted take on the sport to the PC. How late can you deploy your chute before you end up a squishy bag of broken bones? How far can you trust your helmet's proximity meter before you splatter against a window like a bug on a highway? Do you believe the game's developers when they tell you that listening to your Enya CD will relax you and help you coast with more control... or should you just put on Limp Bizkit and throw caution to the wind?

Who writes a press release like this?! We do. People liked it.

We then went on to discuss what the gameplay might be like. The game at the time was a little more than a concept:

As you descend, you toss the spectators a thumbs-up -- or flip them off -- to boost your score. By suspending reality just a little, this new game makes real-world BASE jumpers look like kids bouncing on a trampoline. This is AaaaaAAaaaAAAaaAAAAaAAAAA!!!, and it's coming in 2009. Check out videos and images from the alpha test at www.dejobaan.com/aaaaa.

Flip off spectators? Really?? This was a random idea that didn't even actually exist in the game at the time, but once we wrote about it, we knew we would have to put it in.

We had managed to get on the press and player's radars with a name, a few prototype videos on YouTube and only alpha-quality screen shots. With a budget of $0.00 to use on advertising and public relations, and our last title over a year in the past, we had to be memorable. It's hard to be an indie studio and grab the press' attention. Setting out to "be memorable" and "be different" is hard to quantify, but it is what will get your game noticed by the press. An interesting concept coupled with your own personal character. One quote from Destructoid says it best:

This is a good read :) I think you did a really great job on the marketing-part with such a low budget ;)

This is more like PR information, and its very specific to your game. Doesn't really say much useful about marketing itself

I think it makes some very valid points about doing everything you can to set yourself apart from the "big boys" of the AAA world. While not every game is going to be as wonderfully wacky as Aaaaa!, the same principles can be extended extended to plenty of other indie outfits.

*runs off to find a ferret*

In all seriousness though, Excellent Article and yeah I'd also thought about the Counter-AAA marketing stance, but its good to see someone's already tried it and proven it works. Eventually a lot of indies are going to have to do this- because competing with the AAA firms is just suicide.

So simple thing to do is just be the anti-AAA, I think enough gamers will love the idea because most gamers I've noticed hate AAA games for never living up to the hype and for always being terribly buggy most of the time.

Most indies can develop just as good products with fewer funds and the result is higher returns per unit.

I wish all the best with sales, it looks like you've got a hit.

I'll be honest: The only reason I clicked was because of the ferret pictures.

I think you guys are doing a fantastic job on PR! You seriously couldn't have done any better! This is definitely the way to appeal to the gamer crowd without copying the big developers. Congratulations!

Everyone, thank you for the love, the hate....ok maybe not the hate. Aaaaa! comes out September 3rd. If you like our PR, check out our demo, the game is just a little better than the PR.

We're launching on the 3rd?

In the end it comes down to sales, and how people look at your product and company is determined by its sucess. It's kind of an perpetuum mobile, once you get it going. Some companies, e.g. Lionhead could live of their fame for a century, before most people notice their games are crap and don't live up to the hype.
I like your style, because its honest, though maybe not serious enough as to help you find investors. It's funny by itself how the people with the money often lack any kind of humor.