I was working on a quick test with generating light maps for a test level called "Manchester". It turned out reasonably well, at least for a first test attempt.

One of the things I wanted to do for Damzel is achieve a sort of "mirrors edge but on the ground level" aesthetic. So when I heard that Unity used the beast lightmapper in version 3 I figured I'd give it a try out as a possible toolset for generating lightmaps for Damzel (I'm NOT using unity by the way).

Its looking promising that I might actually be able to use Unity as my level editor toolset, where I place objects and bake lighting, AI navigation mesh and physics. I could even script up a bunch of tools for generating the cityblocks (right now these arent on a grid, but eventually they will be).

The image you see below, is the "beast" lightmap global illumination applied over basic diffuse colour with the occasional texture. Some of the UV mapping got lost in the import process, but I'm not too concerned about that.

I'm not sure if I'm going to stay with a more abstract view of the city (like this) or try and build more detail into it. Right now I'm just finishing up a contract gig, then I'll go buy CityEngine and get to work generating a more representative scene.

Anyway, wanted to share this image and let everyone know that Damzel is still chugging along. Although the number of posts to youtube will be quiet for a while as we sprint towards more gameplay and forget about the creation of dodgy videos for now. 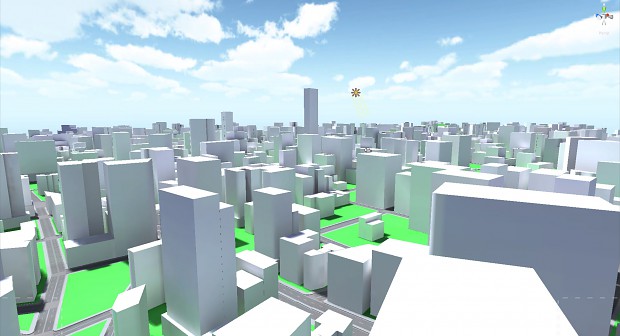 Sweet, also there are several demos and etc. out about generating random cities.

Are you planning on keeping the art 'simple'? (For example as in the screenshot with gun)

Metalspy: Good question. The game will never be "realistic" looking, but I think we'll end up with something thats a hybrid of team fortress 2's painted style and mirrors edge's aesthetic. Right now all of this stuff is programmer art, hence the pretty shoddy visuals.

wonderful! I have always loved the baked lighting feeling that Beast leaves behind :) It really adds a lot to the game, with a deep ambient occlusion pass and some global illumination. Sure, the lights aren't real time, but they are damn sexy!

Nice job on the lighting!

Just curious as to why this is under custom built?? The screenshots look like they're from the Unity engine, and it has a page on here so you should file your game under than and it would get more attention. :)

I'm not using unity. I was just using unity to test out beast and maybe use it as a level editing tool. Unity is great, but it has a few restrictions that I can't live with right now.

the lighting and texture reflection reminds me of Mirrors Edge, that game had some of the greatest lighting features i could ever hope for. :)