I've had to make a change to the Language System so that it actually works, I've added a new Module to the To-Do list and finished the first-draft of the Vapiole.

Greetings Cerrians! I'm still ill, but well enough to do a few hours of work before I go back to bed, but i that time i've finished off the first draft of the Dictatorship Vapioles.

Yeah, you heard right. Fish Dictatorship, isn't it genius? But first, let's get the other things out of the way.

Alrighty, the first version of Languages was that it would be a whole new thing.
"? how you are" as opposed to "How are you?" was my original idea for the order of sentences. But, at that rate, it would be immensely difficult to have a language that translates completely correctly between English and said language, seeing as you learn "some" words when learning the language (See the Languages in the CerriaWiki).
So now, the order will be the same as english to avoid any issues like that "How are you?" = "How are you?", but obviously still holding onto completely new linguistics development and words!

Also whilst on the note of languages, I've come up with an idea for "Faux AI". It's a huge thing, so i'm not sure if I'll be implimenting it or not.
Basically, if you speak to an NPC, you can say anything. You type a question, he answers. At first in the game, NPCs would only know basic questions. But as time goes by, their abilities would increase in understanding.
How? Basically, if you type in a question or statement the NPC doesn't understand, it gives you an error and sends the sentence off to a sort of "Processing" log. Moderators/Admins then go to this list, type in an appropriate set of answers and send it back to the NPC. Player asks the question again, NPC says what it has been programmed to say... Sort of like a programmable puppet handled by mods/admins.
Needless to say, this would wind up with millions of statements/questions that need to be filled in.
Player: What is A? What is B? What is C? Etc. That's just for one question, but with a different letter. Then you multiply this by the number of NPCs in MyWorld and, yeah.
Although, the answers could be setup according to species or vocation.

I've come up with some new modules that need to be handled in development. I call it "Second Wave Species Development". Once i've finished Tatoime (Which finishes off all the playable species), I'll go over them and double-check and tweak a little here and there.
Then I'll write up list of personality traits and give them a range inbetween those that are typical of the race (Sort of like in Modding for Dwarf Fortress!).
Next up will be defining Migrations and Formation patterns of the species settlements according to requires of food, water, resources and so forth.
Finally will be the fun part of dividing up the lands of the species between "political boundaries", or, city-state borders. This then settles everything nicely for City Development and History.

Vapioles, I have decided are going to be under a hereditry dictatorship control. Their economy is stable and crime-free, their only worries are the beasts of the sea that often attack them.
With strict laws on their crimes, the populace should be rather... well, unstable. But due to much freedom on how Vapioles live their life and free time, this counters those issues. Vapiole workers are given a Quota to fill, and when done, can do what they want for the rest of the week.

So far, I've only got a sketch done of them, and there's something missing, something too human about them.

(I know, the concept is in a terrible pose - but this perspective helps with clothing design! Plus i'm not that great at drawing :D ) 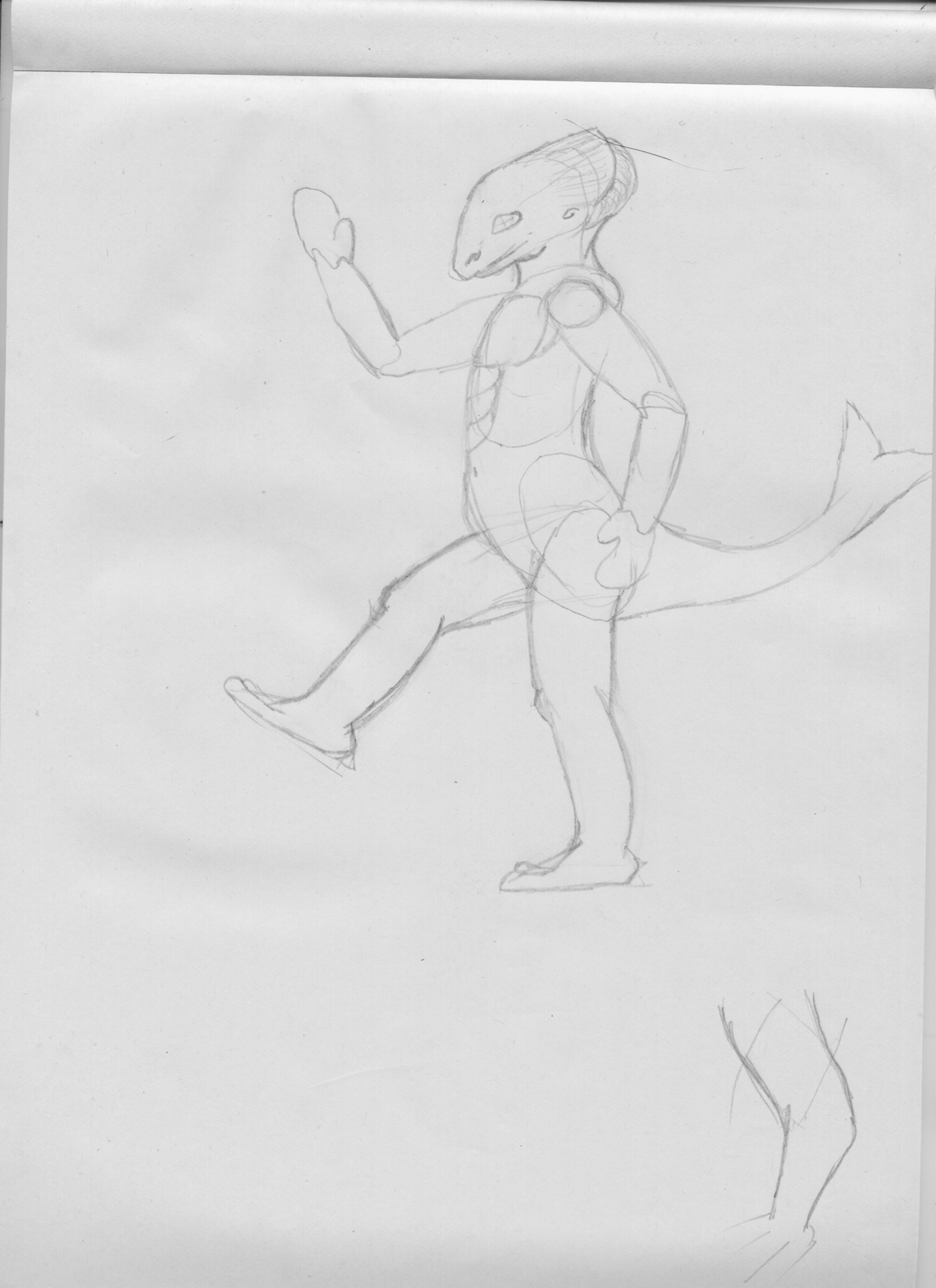 Tatoime I plan to be the opposite of the Vapiole, where they use a LETS-currency system (Favour Points that can be exchanged, rather than a monetary system).

Alright guys, sorry for the delay on the Vapiole Wiki page - it's up and filled now. :)