We have made cards trying to explain the behaviour of each hybrids and their variations, we hope you like. This list will be updated with new hybrids, stay tuned! 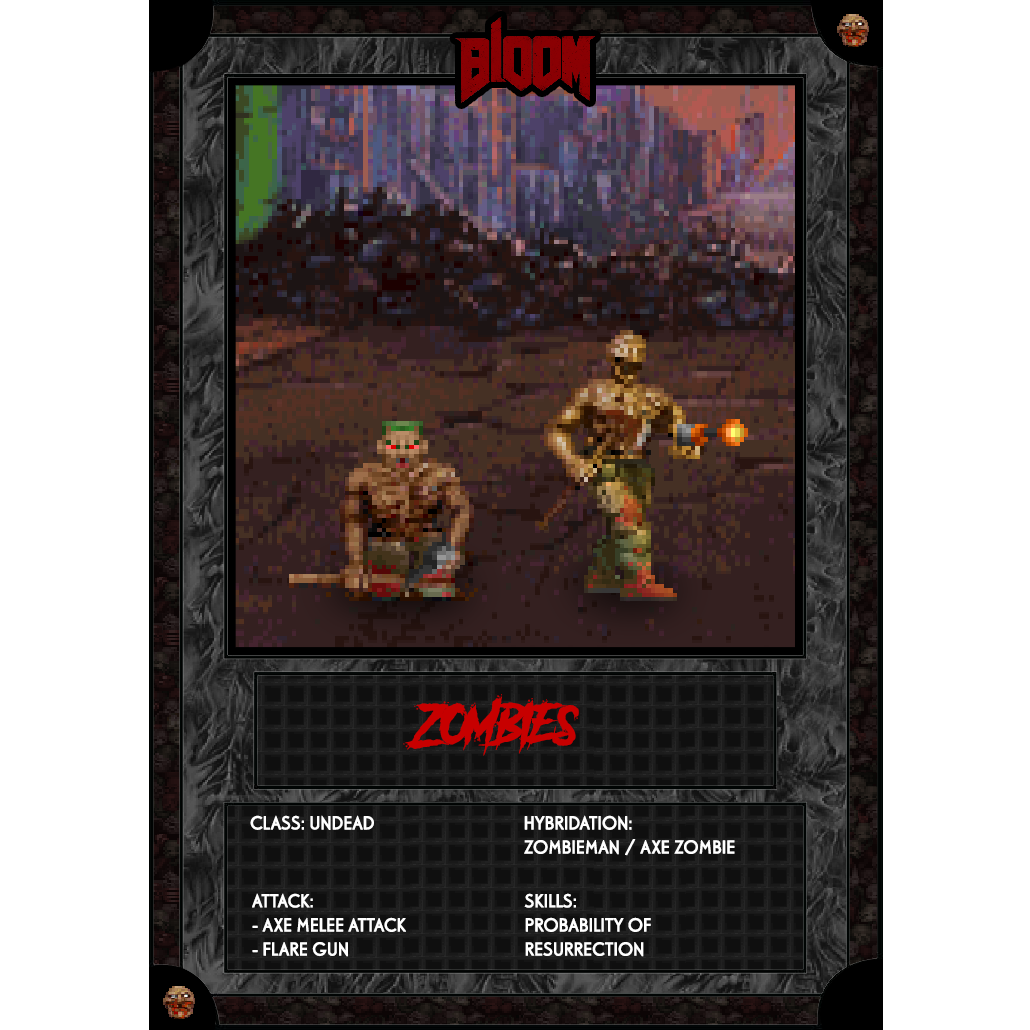 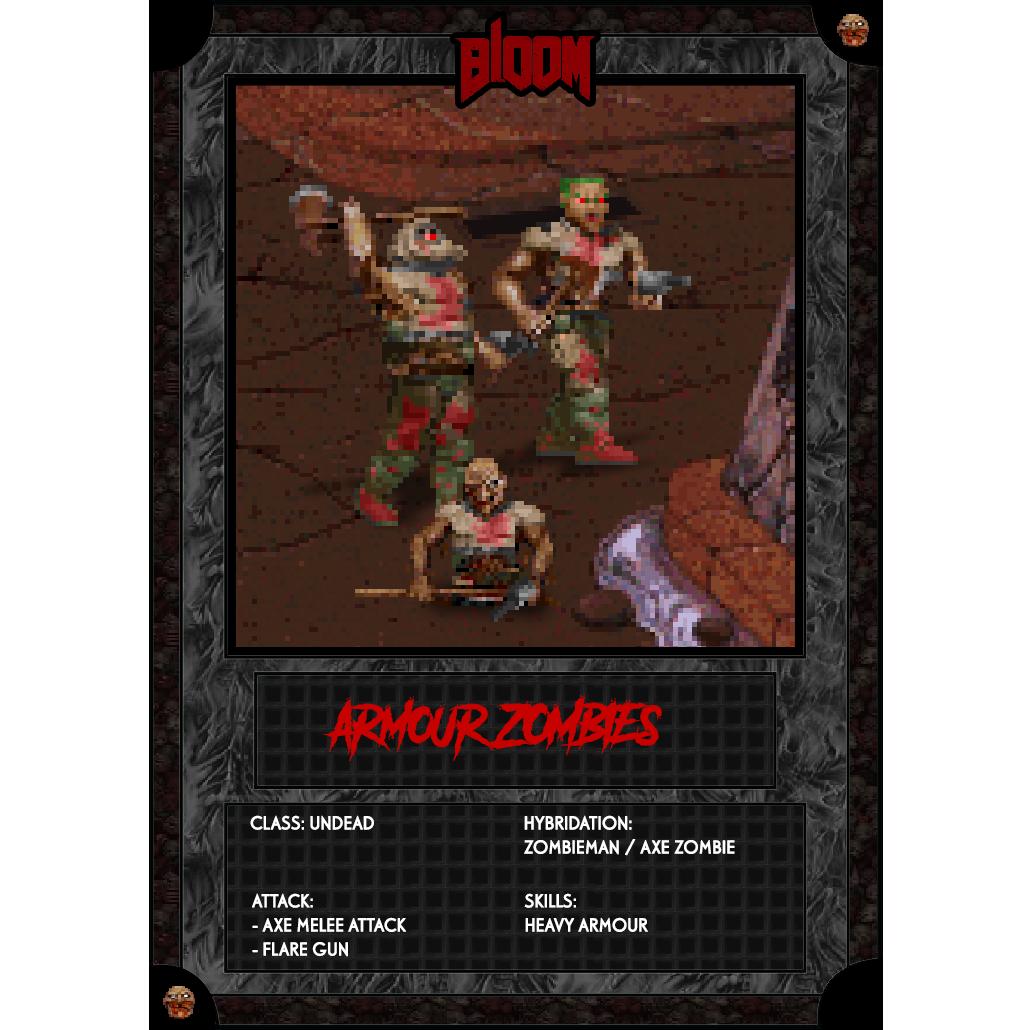 Varition of the hybrid zombie, same behaviour but this time covered with an armor 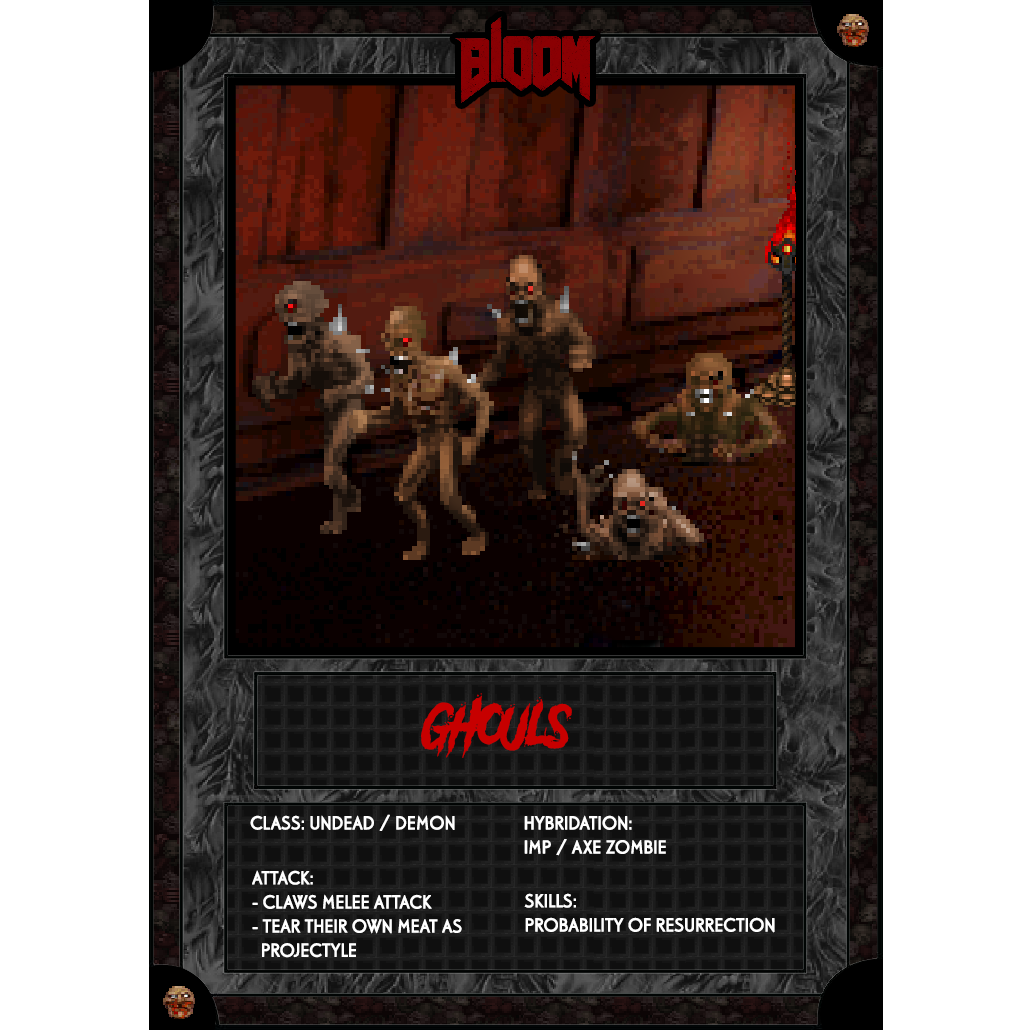 The ghouls are the hybrid between an IMP (Doom) and a Zombie(blood) slow but an effective attack, it throw to the players their own gibs! 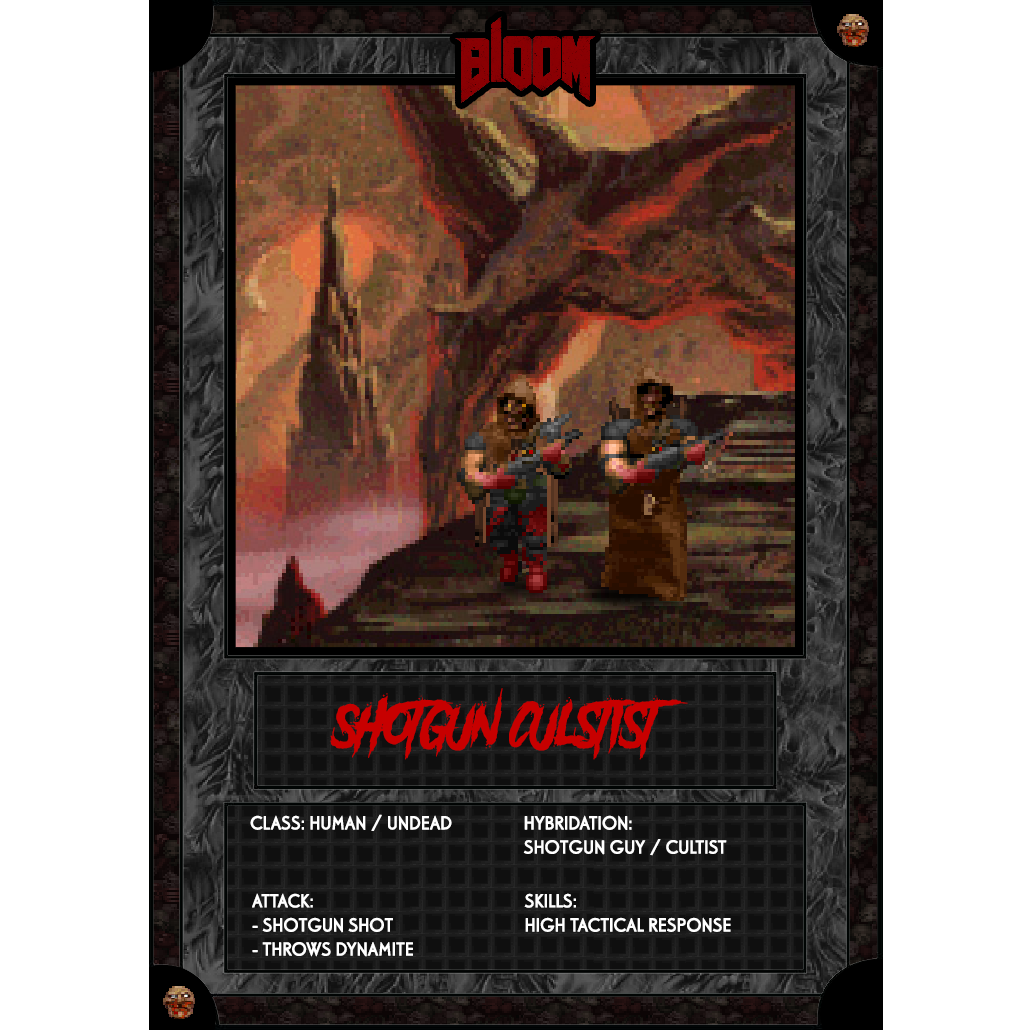 The shotgun cvltist are hybrids between the classic shotgunguy and the brown cvltist, can swim, throw TNT and kill you fast with their shotgun 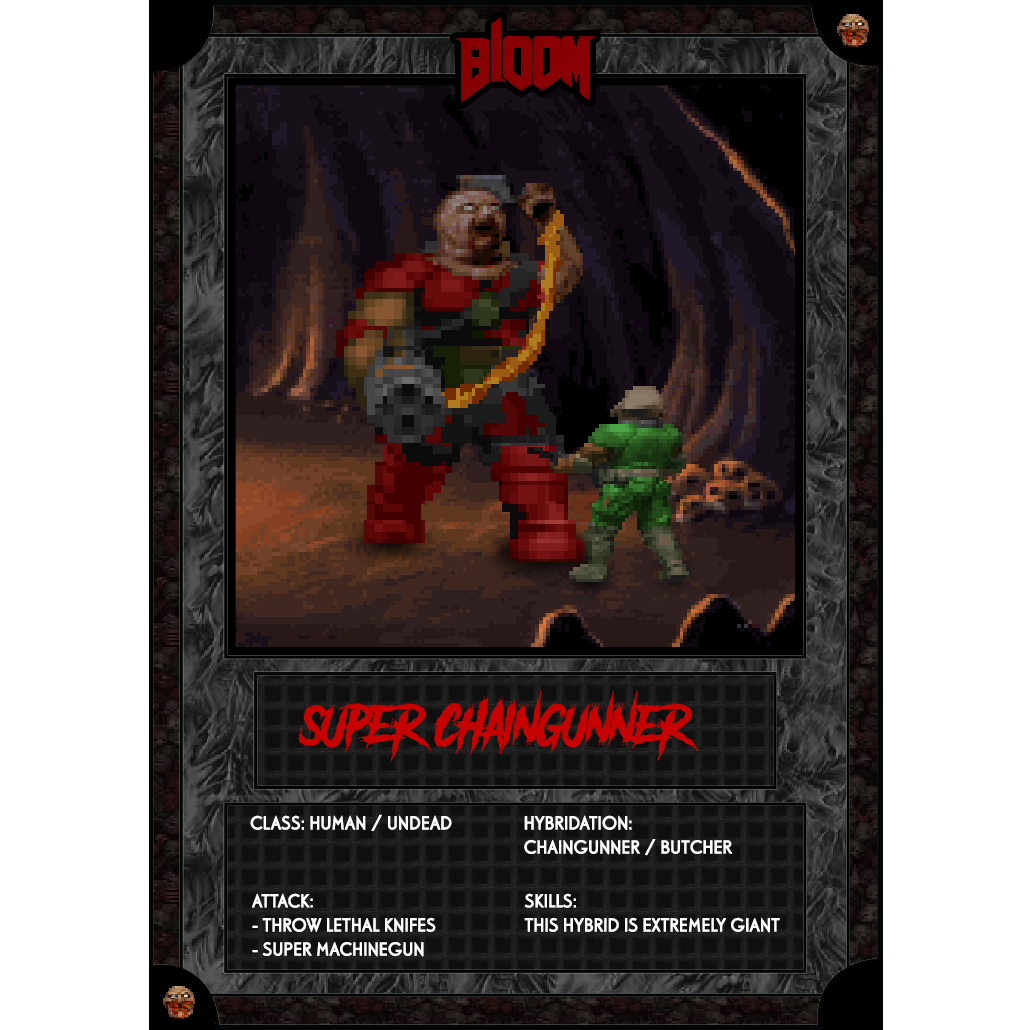 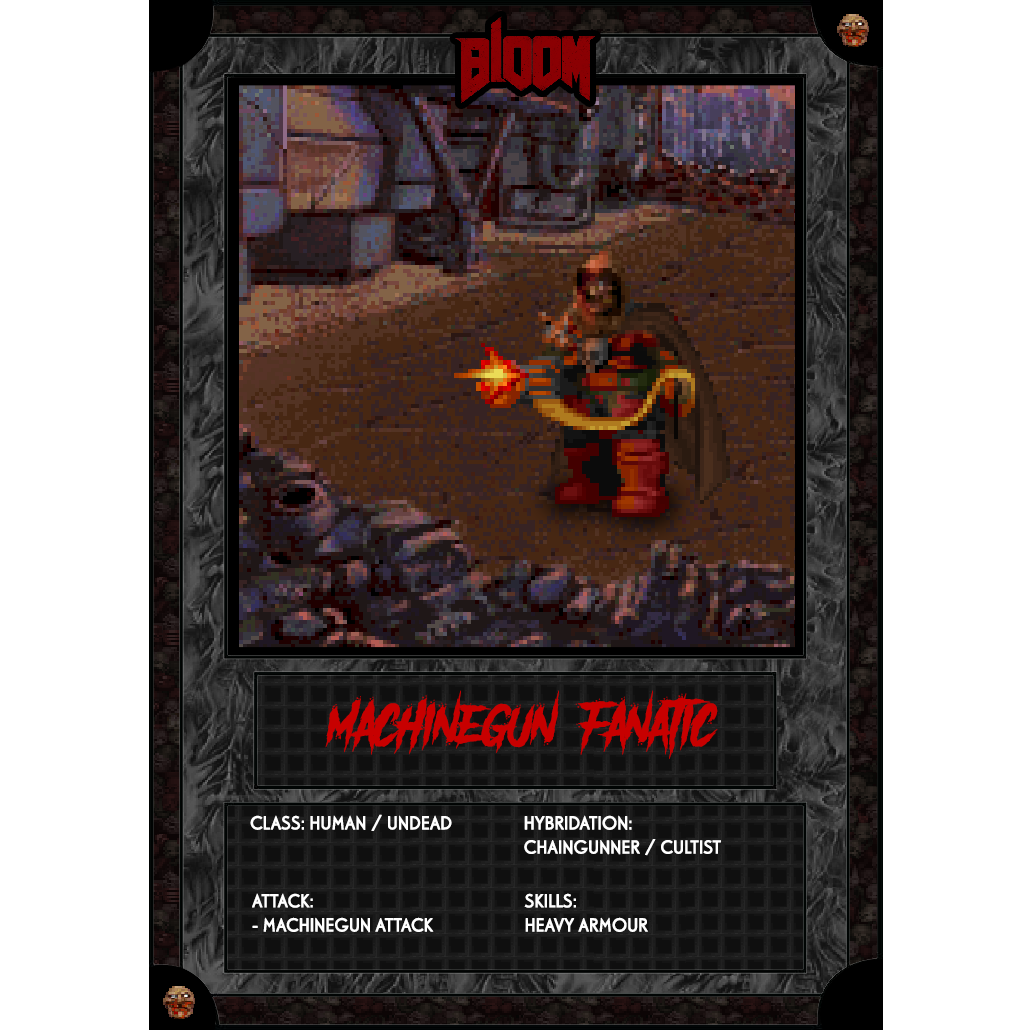 The machinegun fanatic is an hybrid between the grey cultist (Blood) and the Chaingunner(Doom), armed with Chaingun can swim and throw TNT 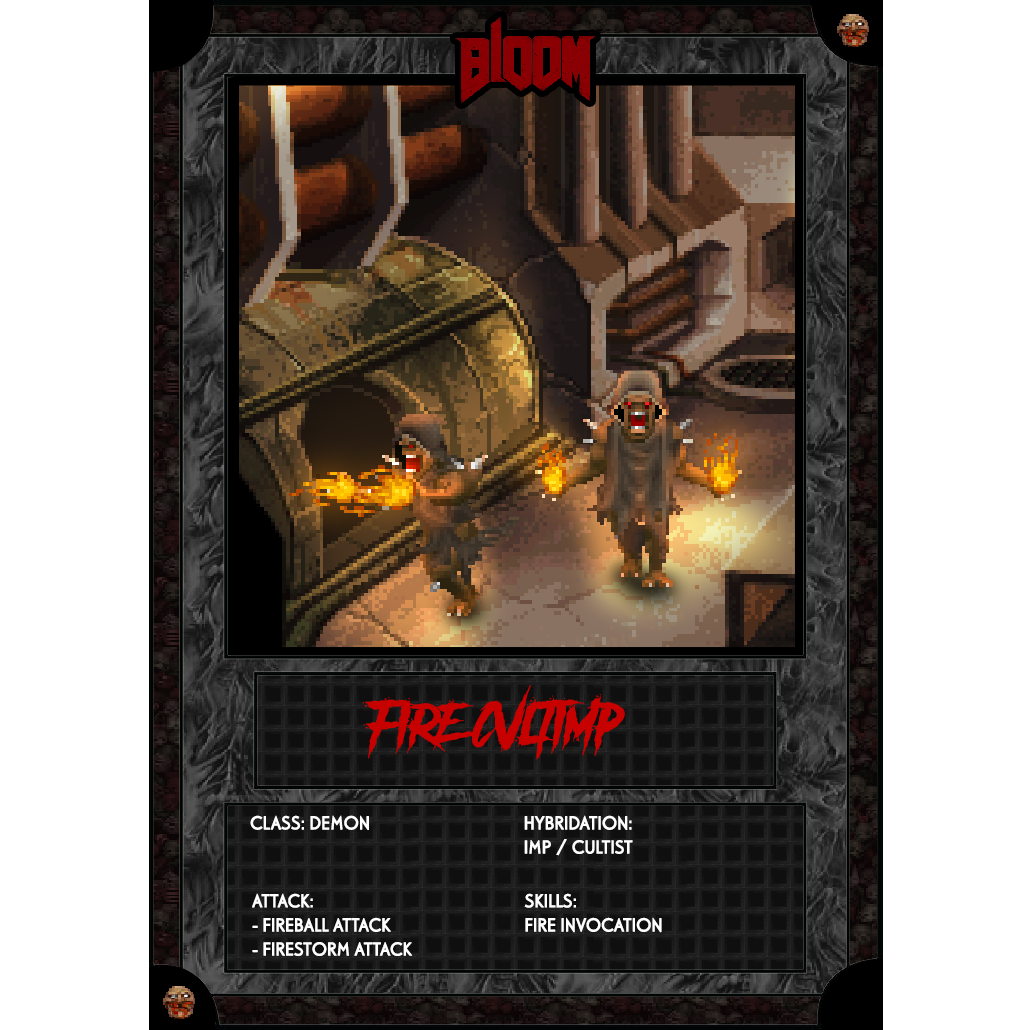 The firecult cultimp is a hybrid between imp and brown cultist, can shoot the classic imp's fireball and also invoque deadly flames when is close to the players 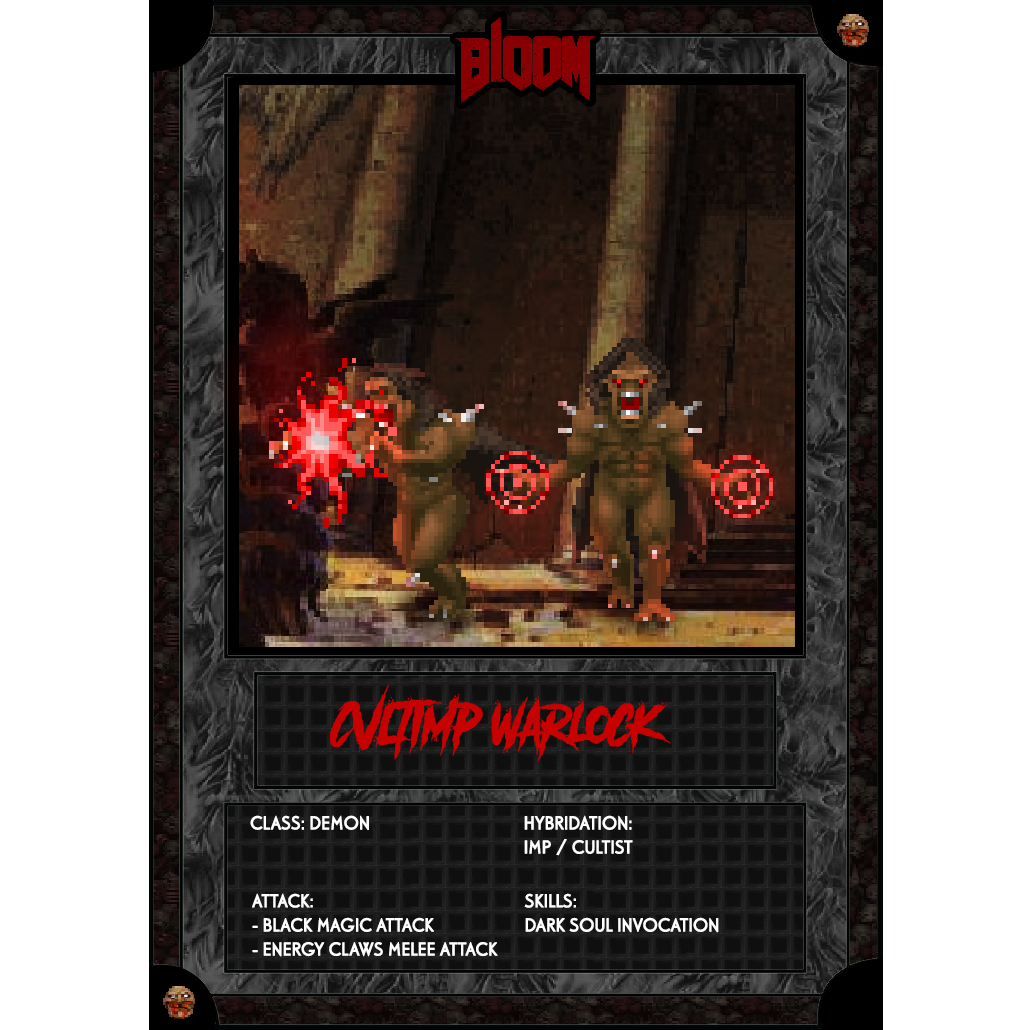 The cultimp warlord is a hybrid between grey cultist and imp, can spell an deadly souls 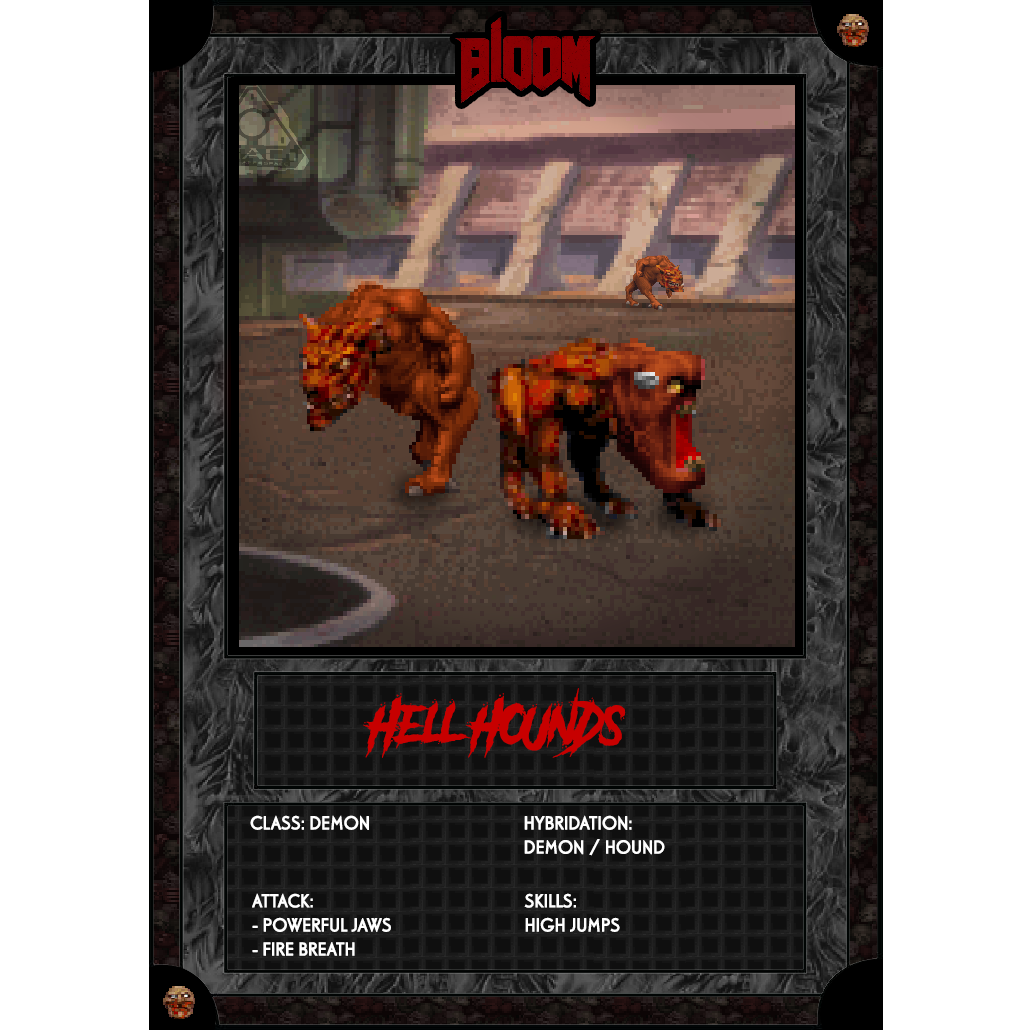 Demonhounds are hybrid between a pinky an a hellhound, their behaviour can be similiar to each other depeding the variation, can spell breath of fire 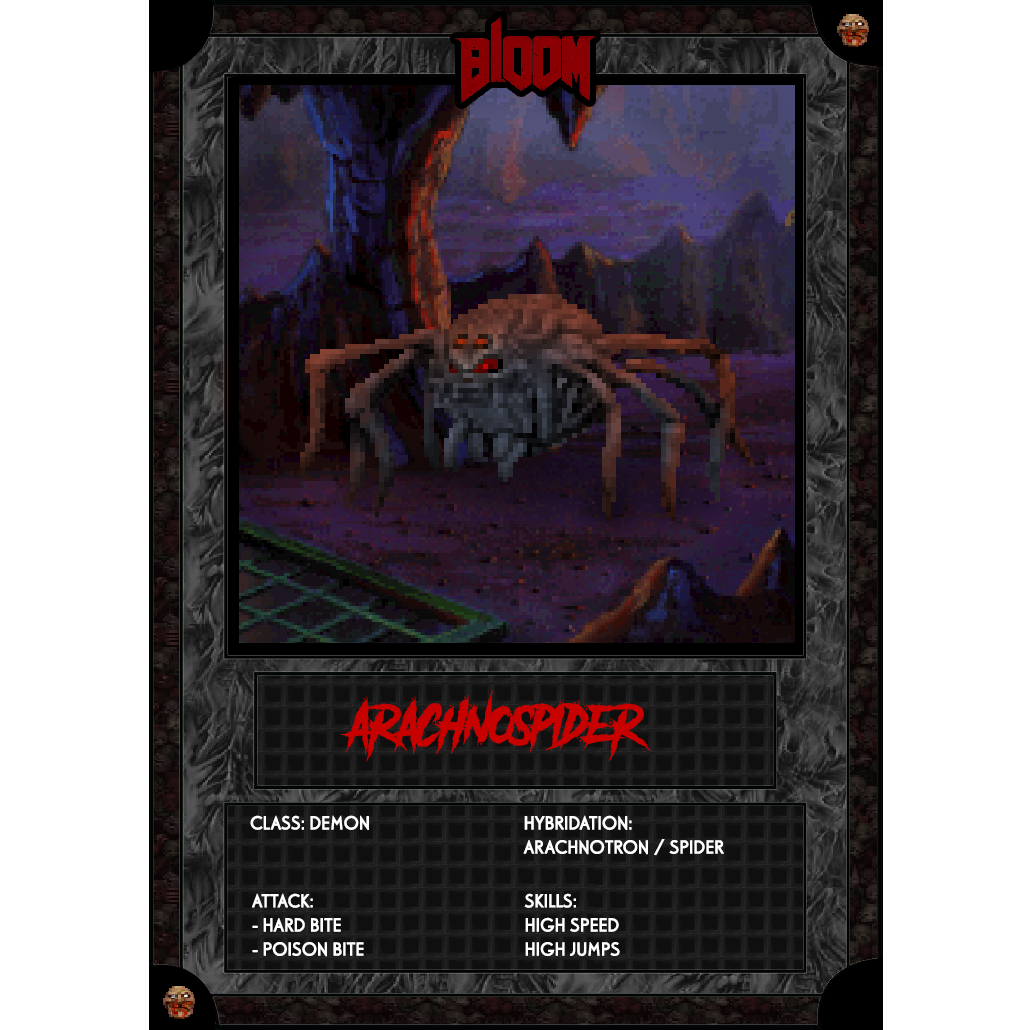 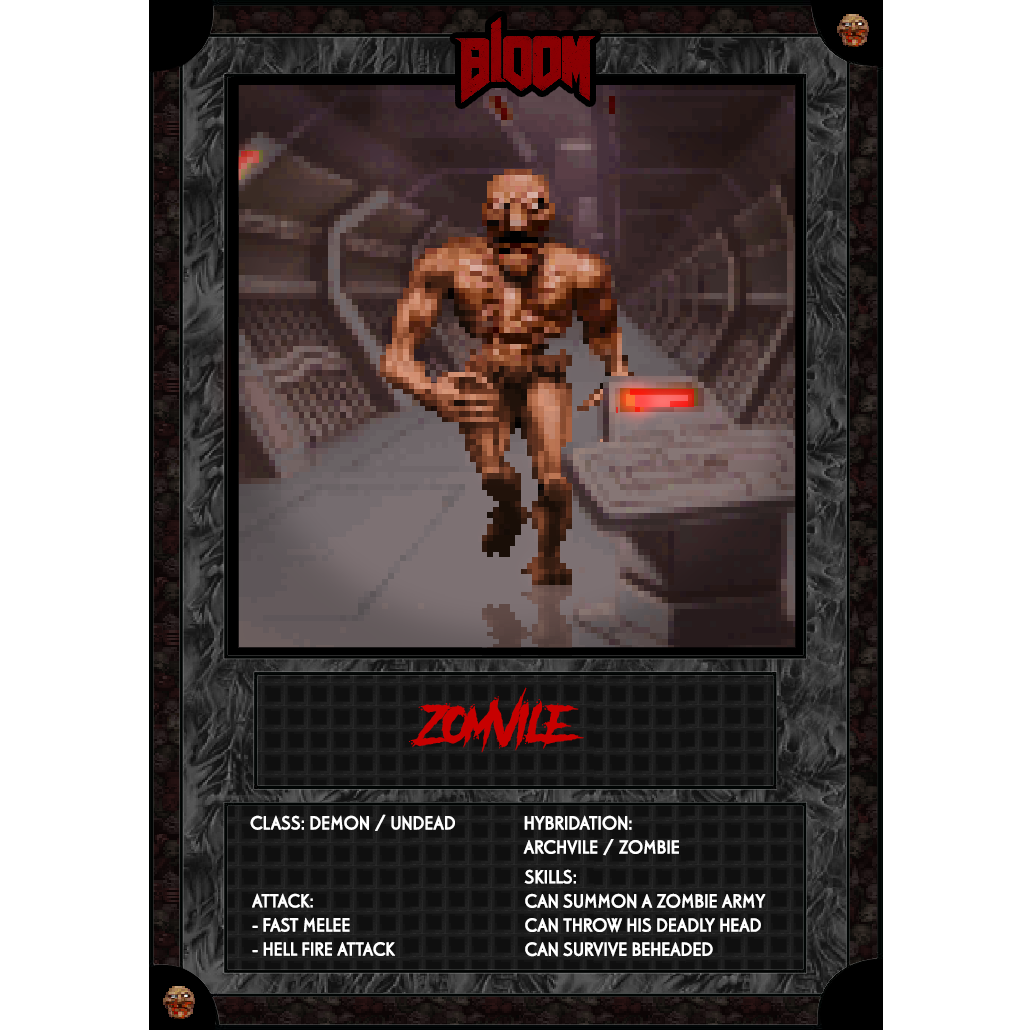 The Zombievile is a hybrid between the zombie (blood) and the archvile (Doom), is defensive monster, their "attack" consist in spawn hybrid zombies 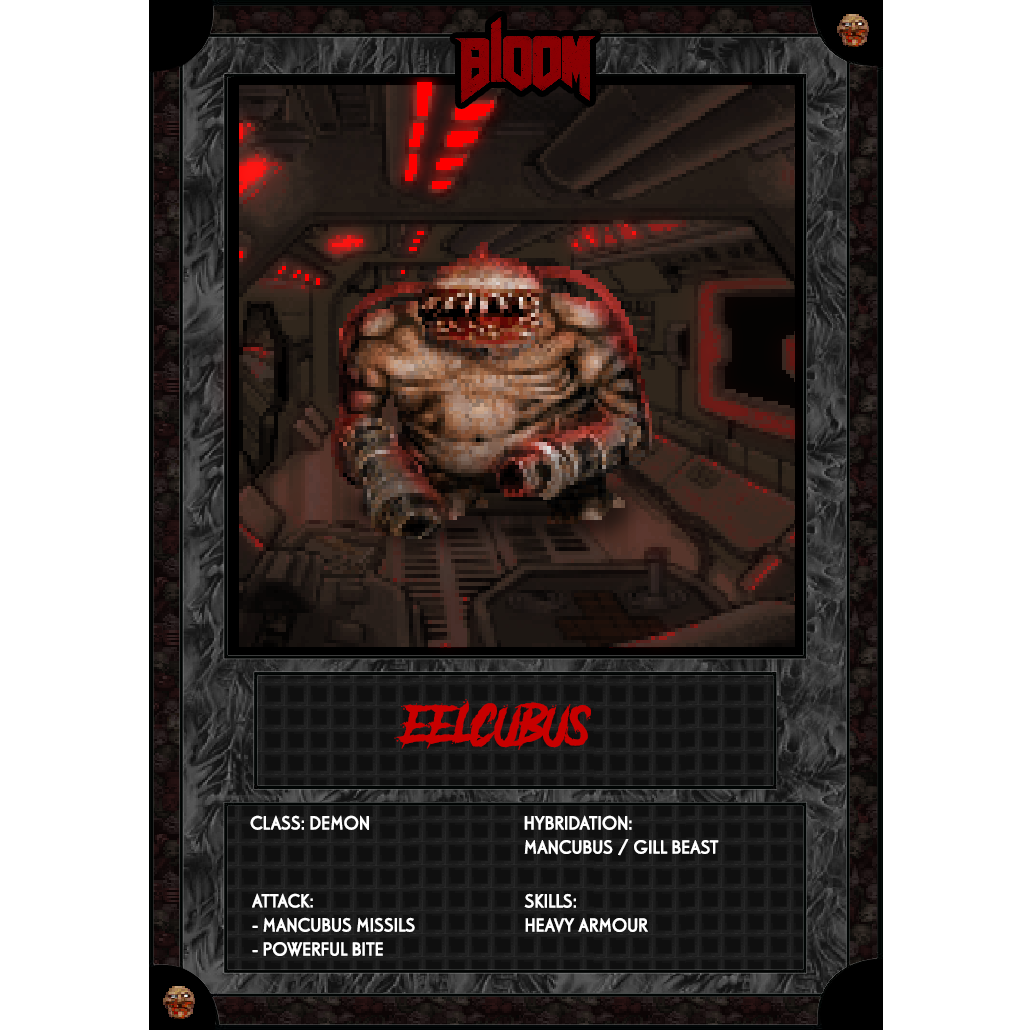 Eelcubus is a hybrid between Mancubus(Doom) and the gillbeast (blood), shoot turbo eel monster as missile and can swim! 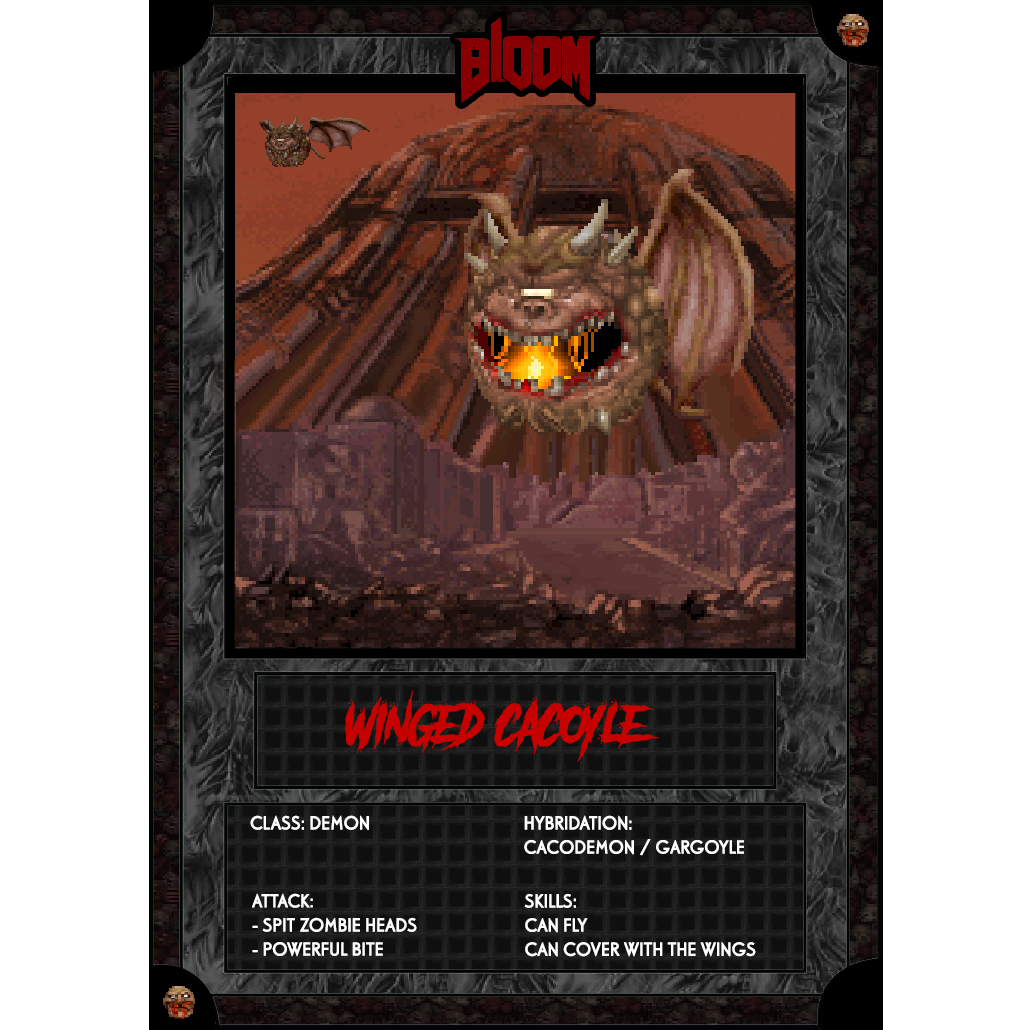 The cacoyle is an hybrid between the gargoyle and the cacodemon, depending the variation can have different behaviour, the winged one can be shieled with their own wings 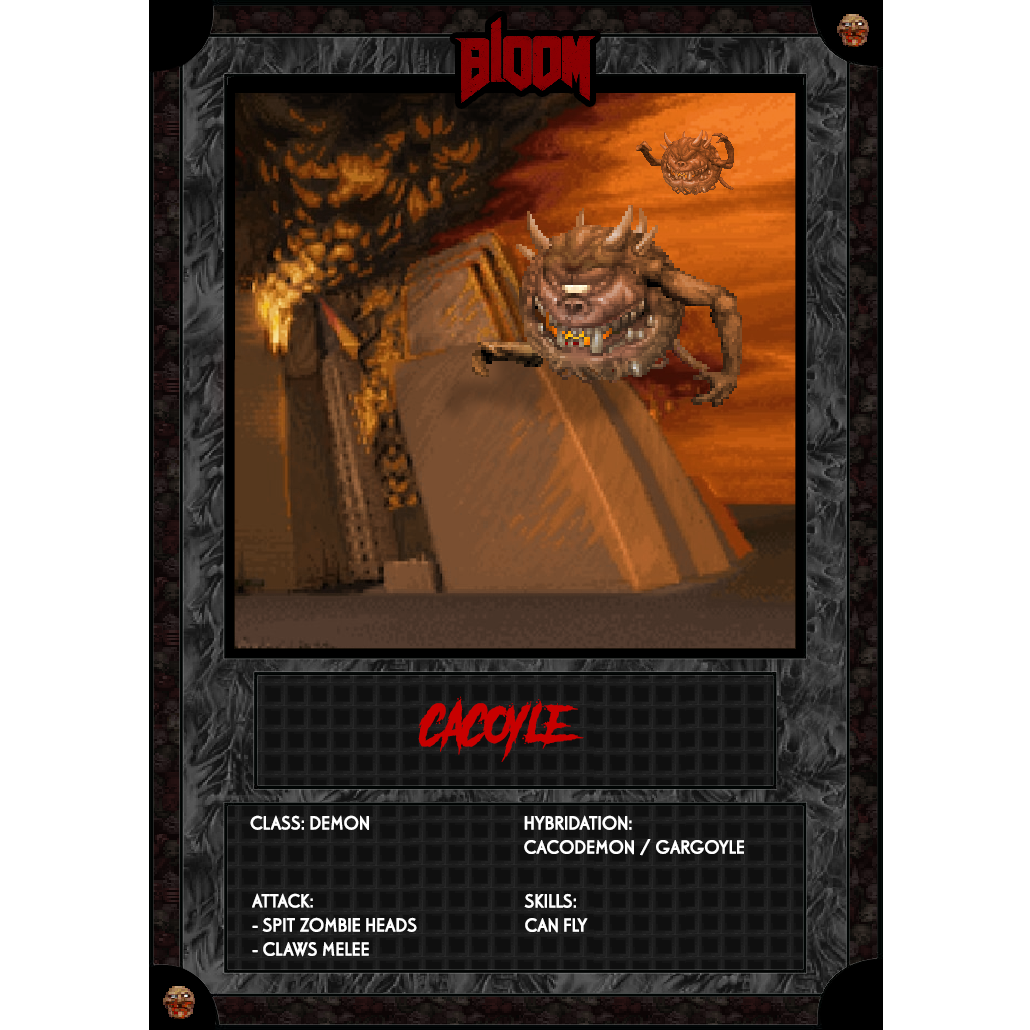 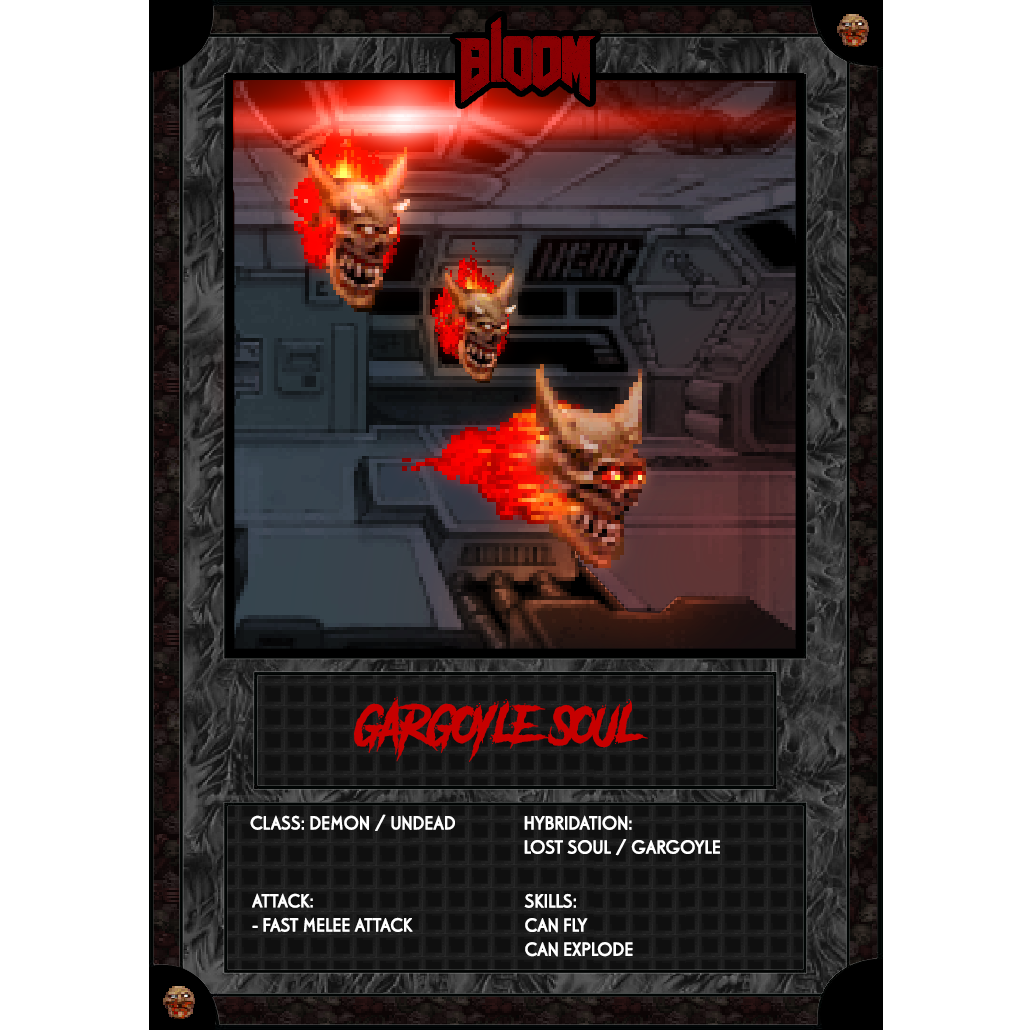 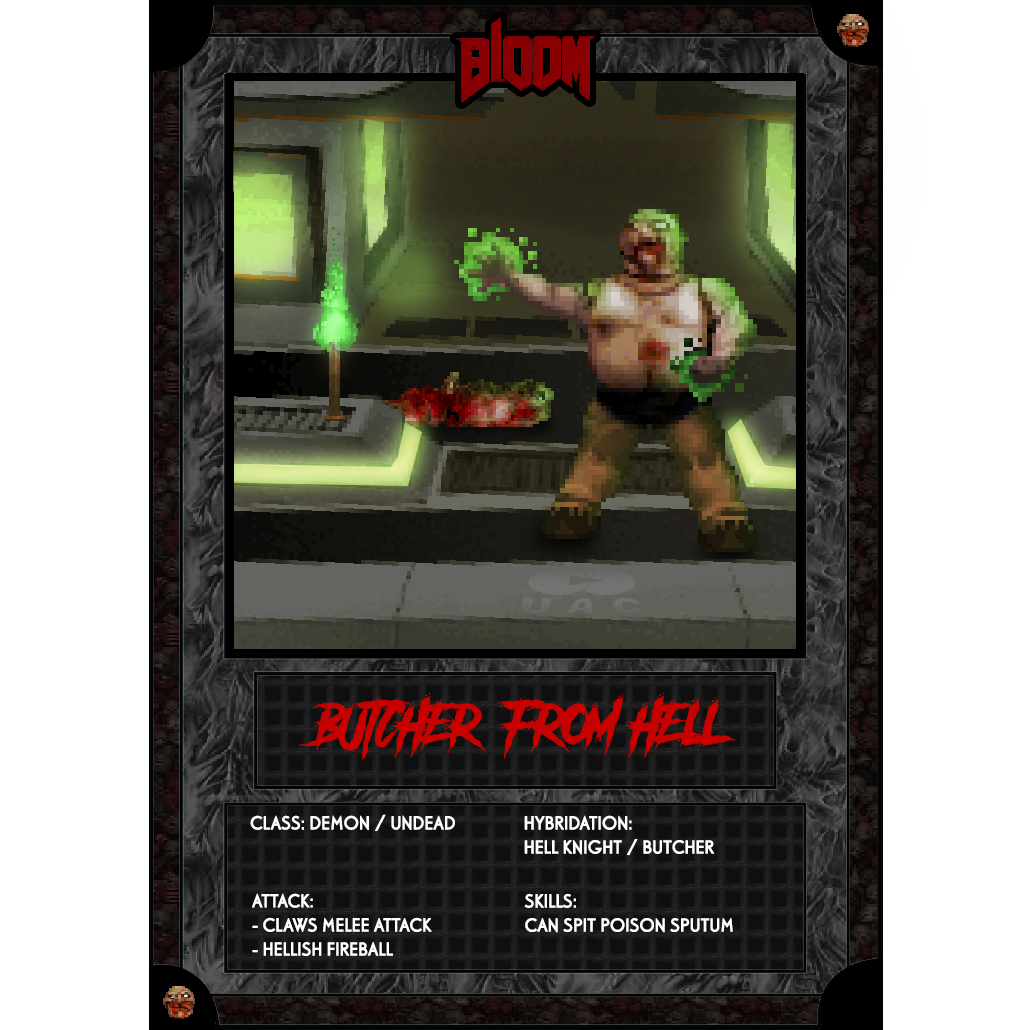 Butcher from hell is the result of the merge between a Baron of hell (Doom) and a butcher (blood), can spell plasma balls, acid puke and throw axes 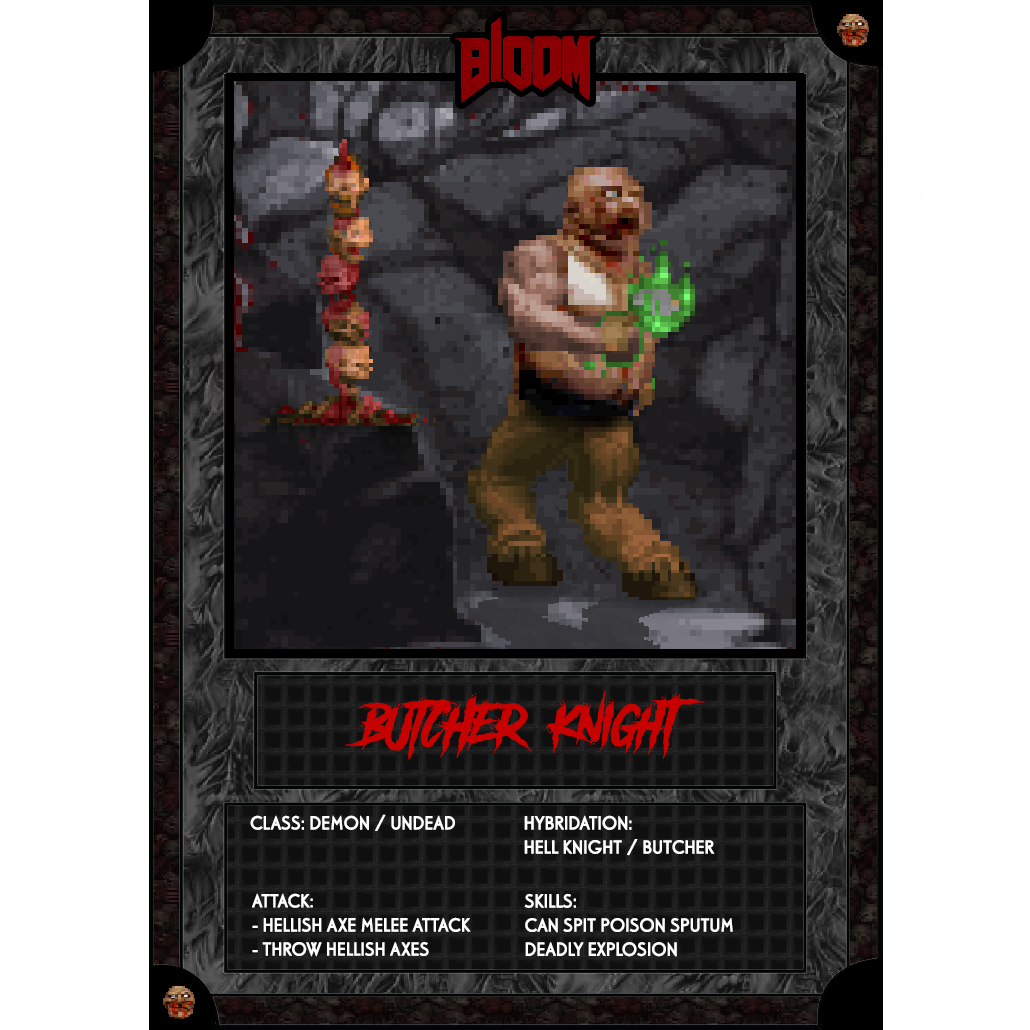 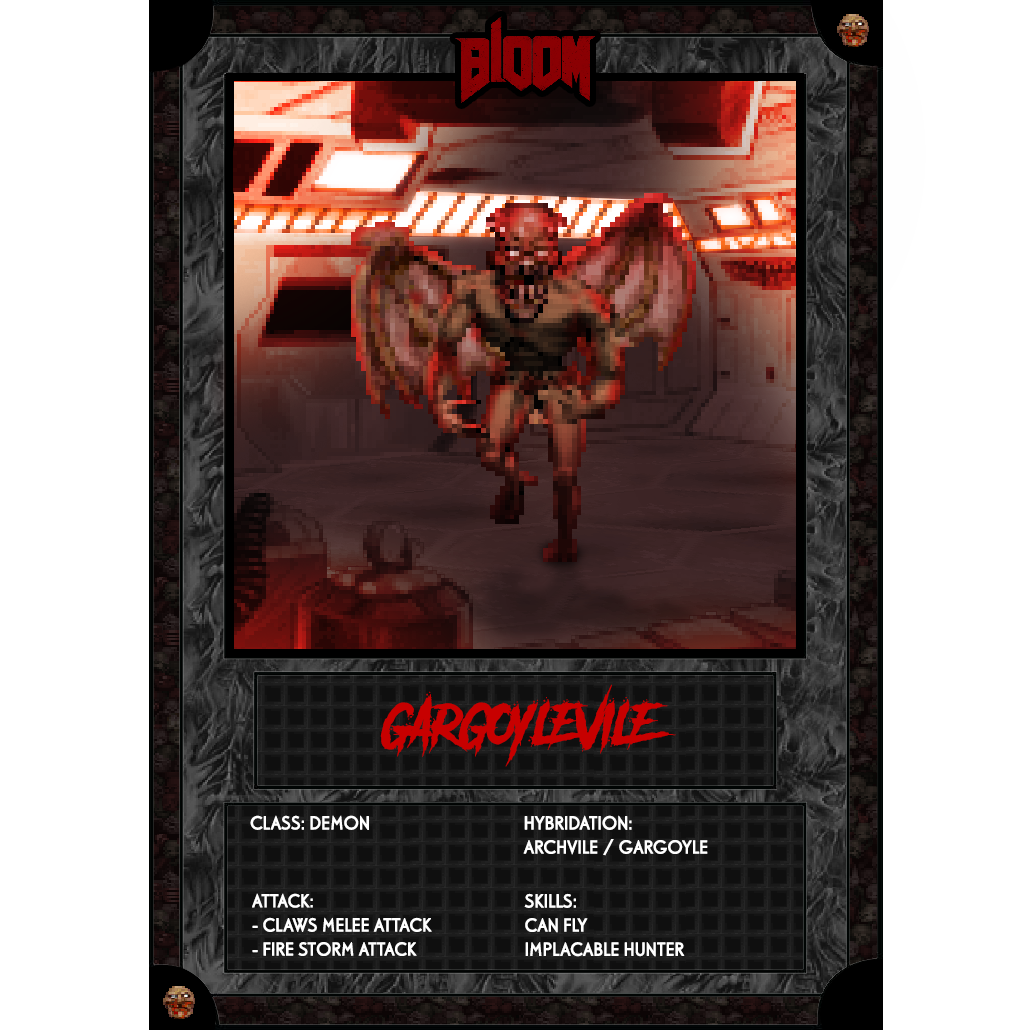 The gargovile is the result of merging archvile (Doom) and gargoyle(blood), can fly and spell the insane fire spell of the archivile 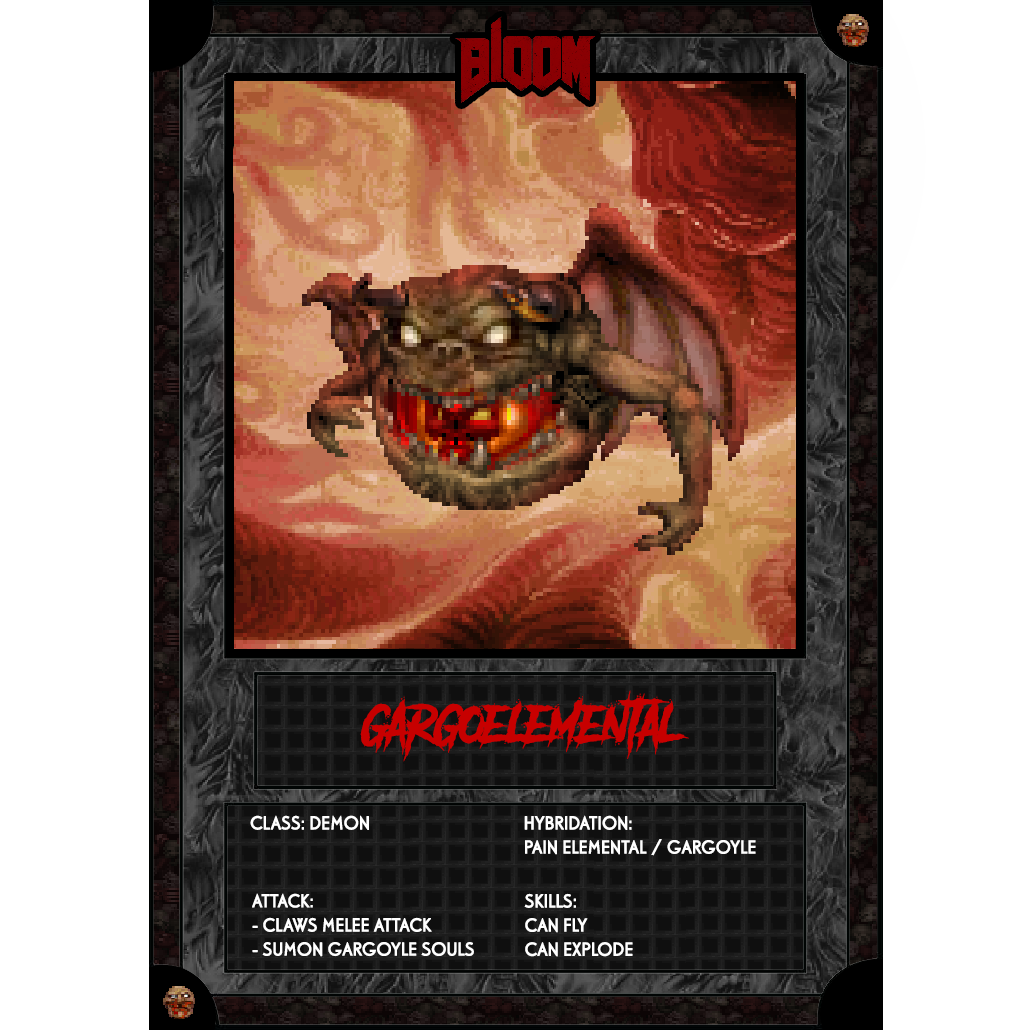 The gargoelemental or Elemental gargoyle is a hybrid between Pain Elemental and gargoyle, throw through their mounth another hybrid called Gargoyle's souls 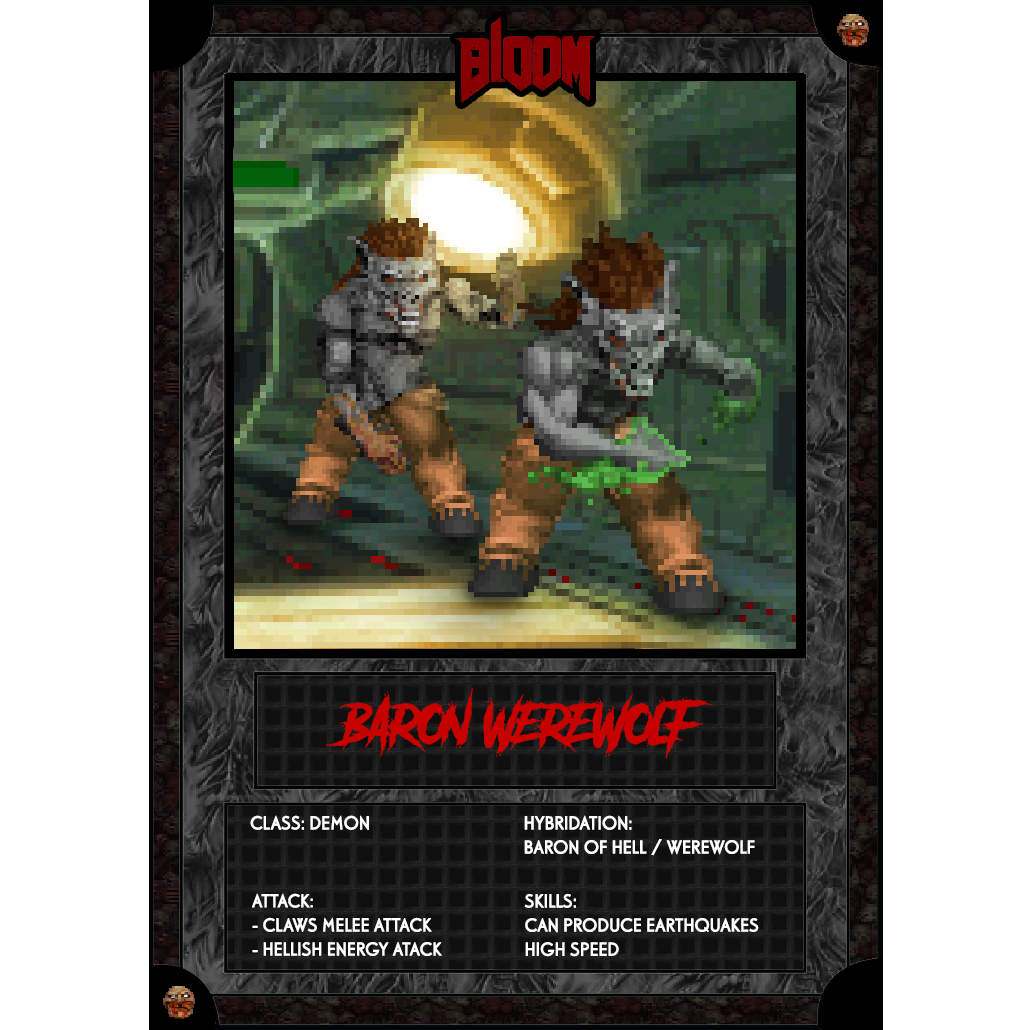 The baron werewolf is the definitive hybrid between the Baron of hell (Doom) and Werewolf (Blood. 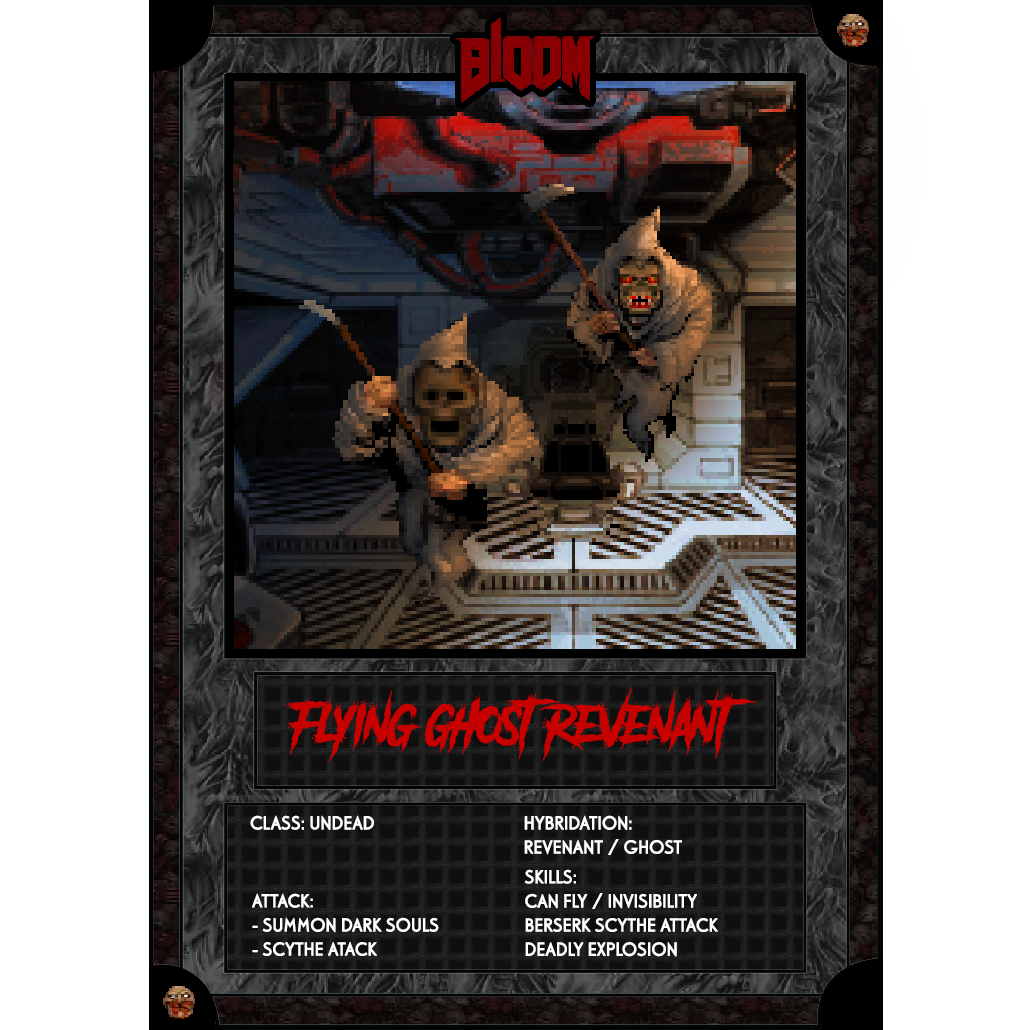 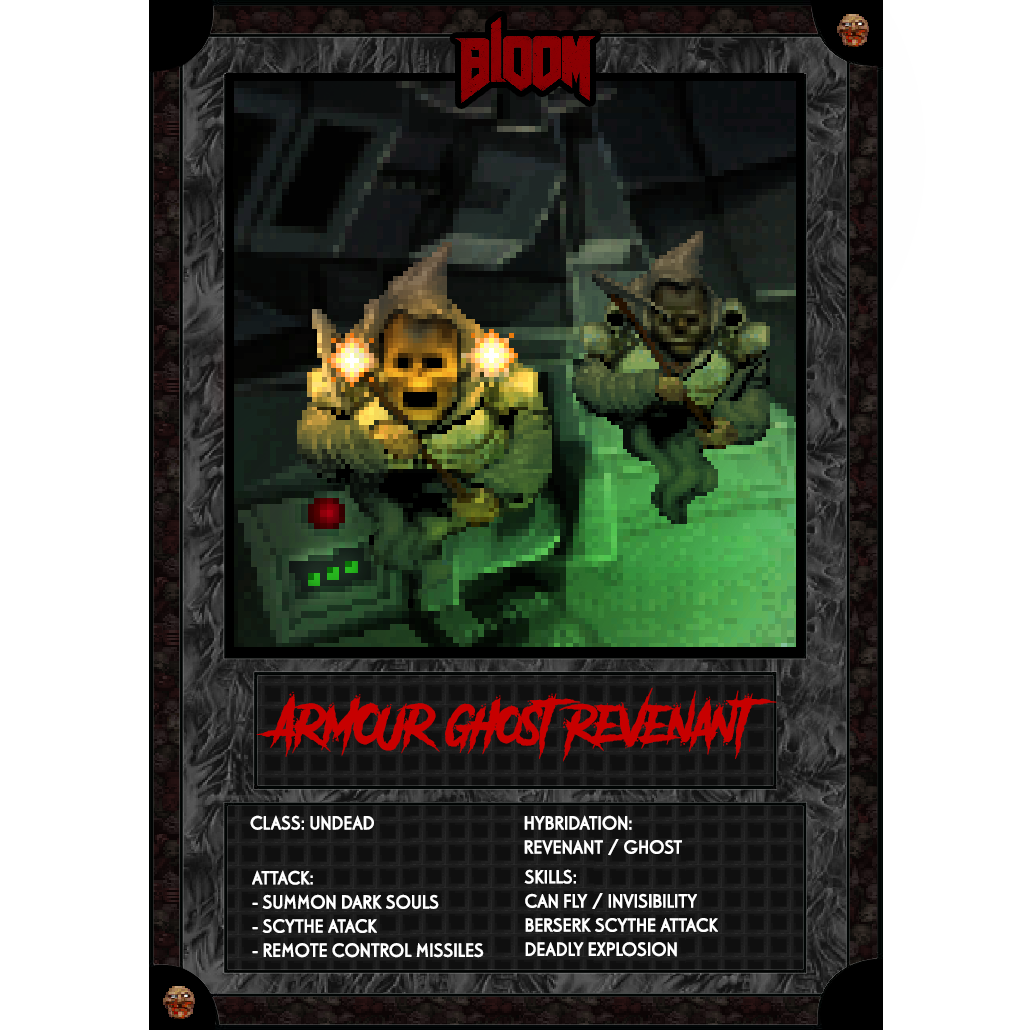 This versions count with the armor and missiles of the reveants 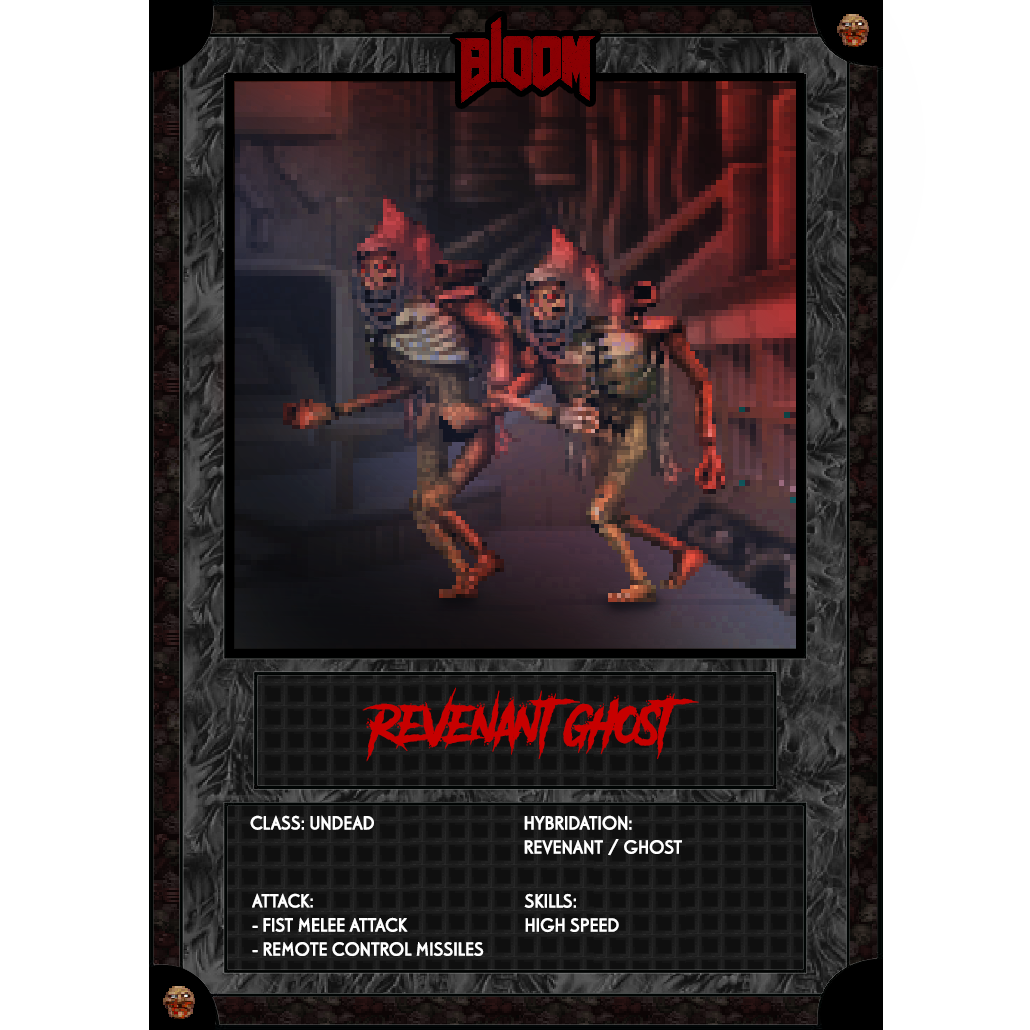 Another alteration , this time can`t clip the walls, but has a powerful melee punch 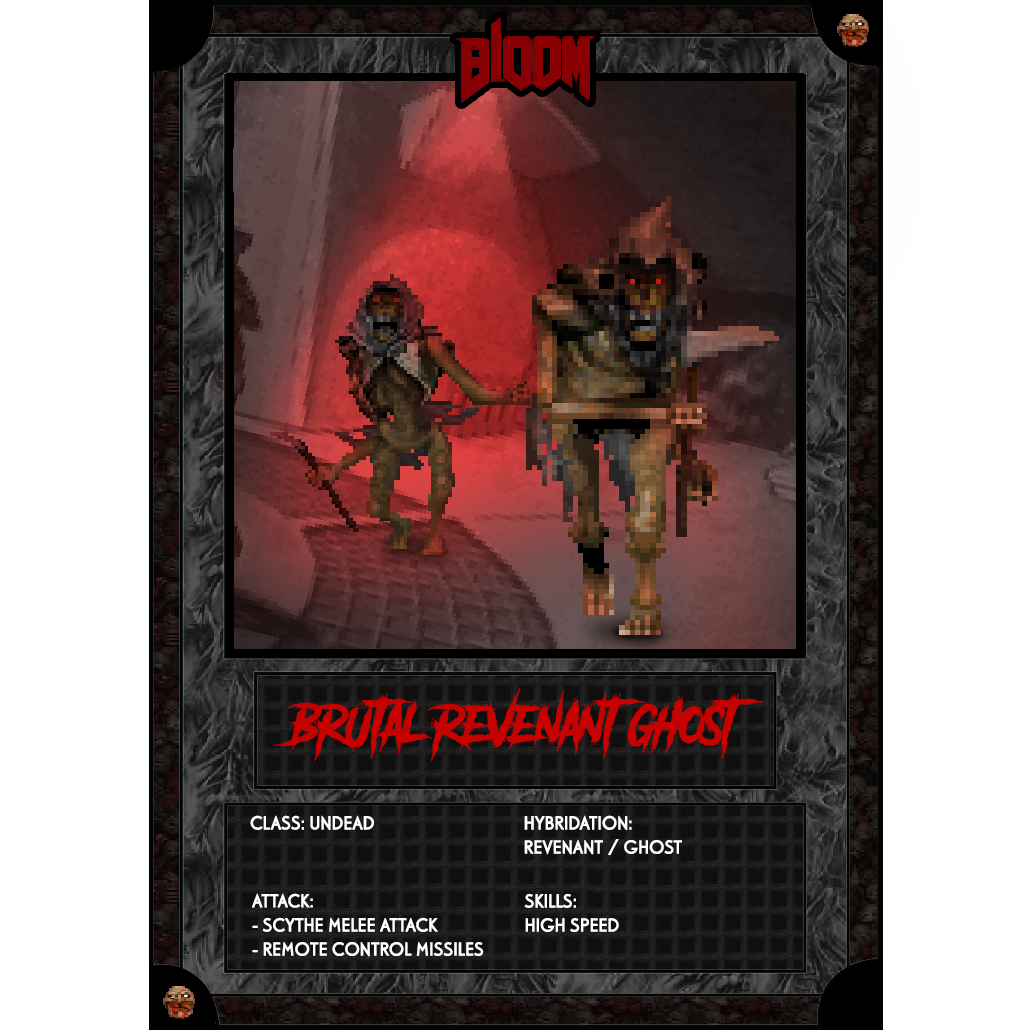 The definitive version of the revenant ghost, fast, armored, with missiles and equiped with a scythe 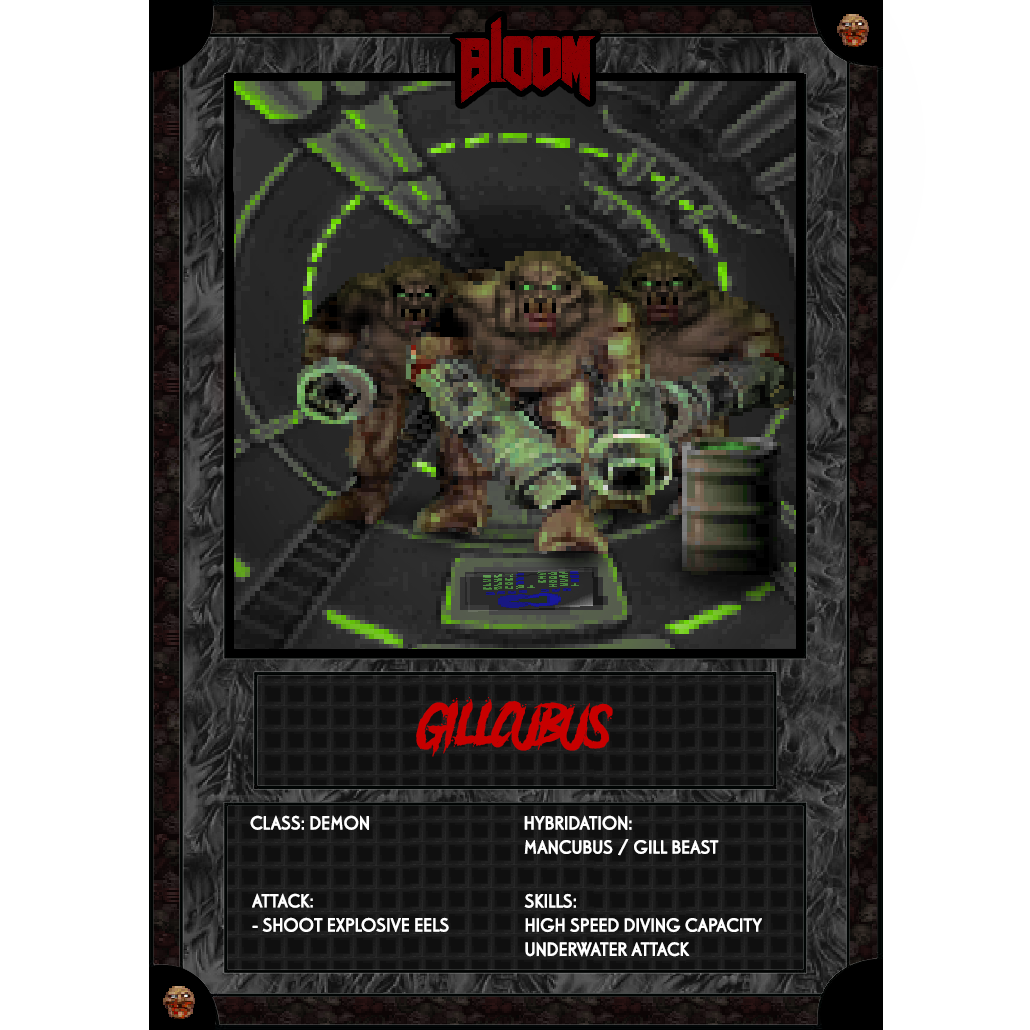 I always felt the Beasts(werewolves) in Blood should have behaved more like the Baron of Hell instead of that mega powerful ranged stomp, and been a regular enemy instead of a Chosen

Awesome, can't wait for it, but I just want to give a few notes and I guess feedback?

The Grey Cultists are actualy called Fanatics.
The Firecult Cultimp, I think the Ackolyte colors (Green) would fit them more and have the Cultimp Warlord have the Zealot colors (Blue) would make the change even more fitting in a way.

(If you don't know Zealot's or Ackolytes, they are from Plasma Pak)

Best of luck on the future of your piece!

Ufff!! This is incredible....can't wait for the full version