Post news Report RSS Just Throwing This Out There...

Got a quick question for the fans/watchers of the project!

Got a quick question for the fans/watchers of the project!

So we've been doing a LOT of work on the procedural item generation and we've decided that we really want to give you more weapons to play with in the demo, but we've had a bit of a change in direction regarding the way we're thinking of using weapons. 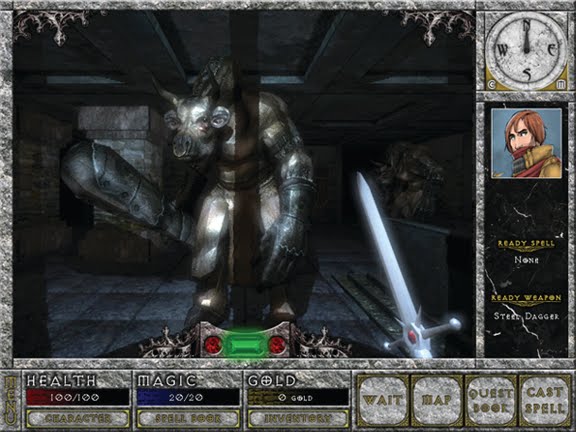 Fans of the classic RPGs that we're inspired by will notice a large, glaring difference between the classics and Malevolence, and that is the fact that the weapon you're holding is visible on the screen, and you can see it during combat. In the old games, that wasn't the case. You just got a "swoosh" or "blood splat" sort of graphic come up on the screen when you attacked. Perhaps an arrow would appear if you were using a bow.

So what we're thinking of doing is possible removing the visible weapon from the game, and making Malevolence keep a little truer to the classics. Instead of the visible viewport weapon we'd probably tweak the UI to have an icon of your readied weapon in the sidebar.

Really what we want to know is wether you, the future players of Malevolence, would prefer it to be kept the way it is, or keep it old school. We're leaning towards old-school, but we'd like to know what you think!

make it an option in the display / visuals menu ...

This is indeed the most versatile option, considering it would give die-hard classic fans a more traditional feel while they play, and still allow less 'discerning' players (like myself) to see the pretty swinging toy cutting into our dastardly foes. However, since this is an indie title, and you guys are working so hard, I could see how at this point you could save a lot of development time and resources on not making the aforementioned 'pretty toy' for players to see, considering the obvious effort your artists put into all their other creations.

Well, it's your call, but yeah, I vote for the 'toggle: Display Weapon' option in the player preferences. ;) Cheers! And keep up the great work!

You really hit the nail on the head. We want to give you all HEAPS of toys to play with, but having to model, texture and animate each of the toys takes a massive toll on development time...

More modern games such as Legend of Grimrock have done away with visible weapons, so perhaps we can too...

I have nothing to add. Just commenting to say that, ironically enough.

What this guy said

I lean old school. I think most people are familiar with that method. Also, the swing animations are hard to do, I noticed they looked a little off sometimes in the gameplay clips. Make sure that whichever way you choose, it's something you're happy with and proud to show everyone.

Yeah, having to model, texture and animate them all takes quite a toll on dev time. But also we get a lot of people wondering why you can't see the player's hands... Perhaps if we can make the "swoosh" graphics cool enough we can get away with it :P

I think you could totally pull it off either way! An awesome swoosh graphic (or several varieties that randomize) and a few great sound effects (Roland!) would be awesome.

Yeah, Roland has been a total game-changer. His work, along with yours and the art team and voice actors have all elevated this game to near AAA quality!

I believe when in the dungeoncrawlers, someone attacked, the weapon would appear and swish across the screen, leaving bloodtrails on hit, sparks on block or nothing on miss.

Try that instead of having it in view on al ltimes.

Well, the whole point to removing it was to save development time. We've been doing some experimentation today with just having the "swoosh" graphic go across the screen and it's actually surprised us with how good it looks. We'll probably put up a video so everyone can see it.

As for the weapon displaying issue, perhaps just show a blood swipe or whatever.

I am happy to see that this is turn based. I loved the Might and Magic first person turn based rpg's 3-5. They didn't show the weapons and it was never a problem.

We'll put up a video soon to show you all what the swoosh looks like!

I love the weapons and the visuals! unfortunately players will always compare new games to old games and vice-versa... so its hard to have a win, win solution.
I always feel more immersed with animated weapons on the screen. Just a sound effect and an increasing/decreasing bar in the UI will really make it hard to know if you are involved in a convincing battle.
Honestly, since you guys have already included many up-to-date game elements, its hard to go back and still convince players to choose your game over the others.
I say "keep the weapons"!

We want to give you all HEAPS of toys to play with, but having to model, texture and animate each of the toys takes a massive toll on development time...

More modern games such as Legend of Grimrock have done away with visible weapons, so perhaps we can too... We'll put up a video soon to show people what it would look like if we just used swooshes. That way there's something to compare to!

I totally understand. specially as an independent game. Modeling hundreds of weapons with textures, animations and sound effects is extremely tedious. So if the game is released earlier, no problem... but I hope in the future after the release, maybe you guys or modders will do some visual weapons...
thanks for listening and keep up the hard work!

The problem with old-school RPGs is that they're old-school RPGs. Lots of developers did them a long time ago and some were very successful. I'm not sure however, that the exact same formula will work today. A relatively small group of gamers will definitely love you for such an RPG, and if that is what you're aiming for you'll do well. If, however, you want to make a name for yourself with this game, you'll probably need to introduce some modifications that alter the gameplay experience and make the end product fresher. Animated weapons could be one of those innovative touches. In the end, it all depends on what your goals are...

Well we're really making this as our ideal game, and that is purely a homage to the old-school genre with a bit of a modern twist. The only people we're really aiming it at is ourselves, but we like to hear what people think from time to time, as others are saying they want to play it! But at the same time, we're trying to avoid having too long a development time. Having to model, texture and animate every single weapon type will push development back literally months :( we'll be posting a video soon with the swoosh graphic to show you what it would look like, so that way people will have something to compare to :)

What about this, have an option to leave the weapon off screen, but when you attack you see the animation? Don't know about you but I wouldn't walk around with my sword in front of my face. :)