Halloween is upon us at last! What does that mean for Johnny Outlaw? Do cowboys celebrate Halloween? Well, there is a video game Halloween tradition you may not know about. It’s called the Shoehorning. It’s when we game developers take a real world holiday and bring it into our video game. Then we give it a shamelessly transparent name and use it to generate revenue from impulse buyers like you.

Maybe you’ve heard of other video game worlds where they celebrate things like “All Pumpkins’ Eve” or “the Hauntening”. Well you can bet that Johnny and his pals celebrate a holiday a little bit similar, and, well I’ll be, I think it’s happening at about the same time! Why yes there is an age old tradition that some still hold dear. In the land past the Ol’ Cactus Flats, deep in the Bone Orchard, they celebrate a little something called “Walloheen”. I’d go into more depth about the origins of the holiday but the justification is fairly shallow. Now don’t you worry! Where creativity fails, capitalism prevails.

Tradition dictates that we should release creepy Halloween skins of your favorite characters in costume, but given the unreleased state of the game that just isn’t going to be possible this year. Instead, for a limited time only, you can purchase what we are referring to as “Hands-On Skins”. Here’s how it works:

With every purchase, we’ll allow you to download a Skin Pack. Just print out the skin pack, cut along to dotted lines, and place the skin appropriately on your screen. Use the appropriate adhesive, or develop a pulley system to move the character. When Johnny Outlaw is released, you’ll be able to place the costumes on top of the characters. It’s fun, and it’s yours to own forever! This ain’t your grandpa’s digital skin! This is real! 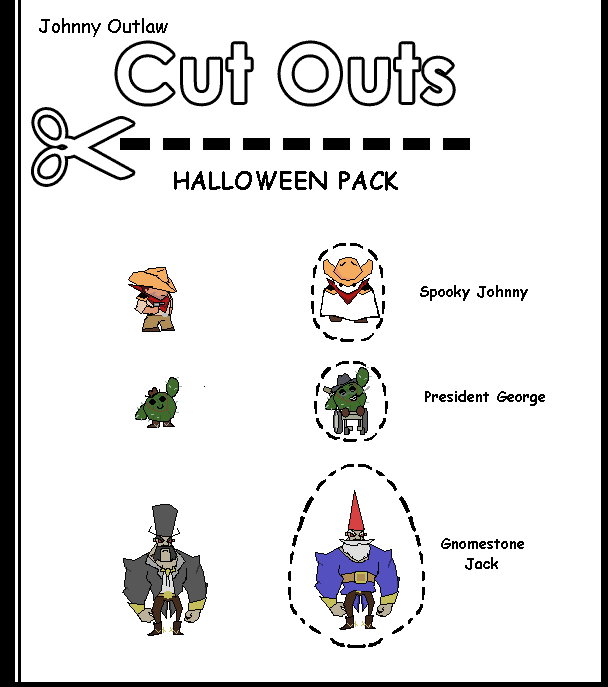 Spooky Johnny: Whoa there Johnny it looks like you’ve just seen a ghost! Oh wait, you are the ghost! AHHH!

President George: We have nothing to fear but fear itself (and of course this devilishly scary costume for our favorite Sheriff)

Gnomestone Jack: Look around you. There are many things to see, that some would say could never be. And this is one of them! Tombstone Jack as a gnome? That’s so wacky that I’d hate to miss this once in a lifetime offer!

Whew! Now that’s what I call scary! Enjoy your limited edition skins, and Happy Halloween from all of us here at the Johnny Outlaw Studios!