Greetings, warriors of Jerusalem! INJ2 by Team Century will be a historically accurate mod. We hope players can enjoy the game as well as experience the realistic living of the 12th century on Bannerlord platform. In this devblog, we will briefly describe the history of the Kingdom of Jerusalem, helping you to get familiar with the background story of this faction.

The Kingdom of Jerusalem was the largest Crusader state in Levant region founded by European Christians. It has been almost a century since the capture of the Holy City and the Battle of Ascalon in A.D. 1099. The kingdom was established by Godfrey of Bouillon, who is given the title of the Protector of the Holy Sepulchre. Later on, Baldwin I of Jerusalem, who was brother of Godfrey; inherited the throne and pass it on to his descendants after his death. It was during this period that the kingdom constantly seized territories from Fatimid Caliphate. The city of Tyre and Ascalon were captured in A.D. 1124 and A.D. 1153. Eventually, the Franks gained full control of the coastline from Lebanon to Palestine. 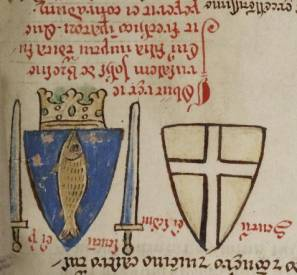 The earliest coat of arms for the Kingdom of Jerusalem in a manuscript, drawn by Matthew Paris between A.D. 1210 to A.D. 1230

It presents that the coat of arms was in yellow and white cross, instead of golden cross with blue or white backgrounds in popular culture (i.e., from Kingdom of Heaven)

The Kingdom of Jerusalem allied with other Crusader states like Principality of Antioch and Principality of Cilicia Armenia. They also allied with the Eastern Roman Empire during the reign of Manuel I Komnenos. In A.D. 1163, Amalric I of Jerusalem started invading Egypt together with Manuel I. They had great advantage over Nur ad-Din's forces. However, the plan of annexing Egypt failed because of Amalric's death and the rise of Saladin. Since then, the kingdom has been on the wane. 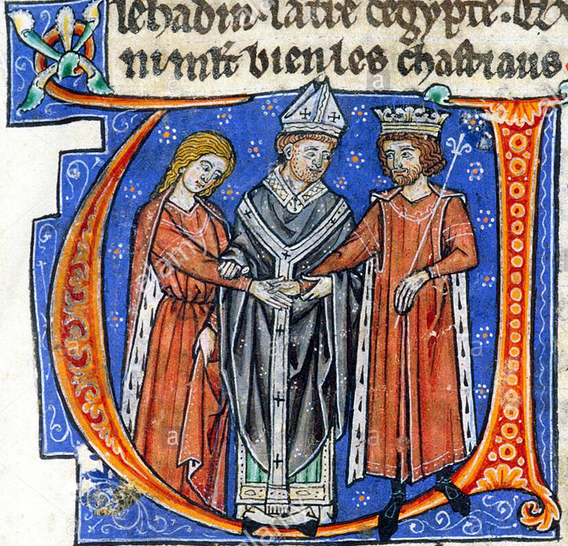 Amalric I of Jerusalem had a son who named Baldwin with his first wife, Agnes of Courtenay. Baldwin IV of Jerusalem suffered from leprosy since childhood. He didn't have a strong body, nor did he have enough ambition and political talent as his father did. Even though, Baldwin IV had managed to defeat Saladin's army in the Battle of Montgisard in A.D. 1177 with helps from Knights Templar and Raynald of Châtillon; the former Prince of Antioch, who had just been released from Aleppo prison and married a widow to obtain the lordship of outer Jordan. But the forces they defeated is just the remanent of Fatimid Caliphate which Saladin had already planned to offload. 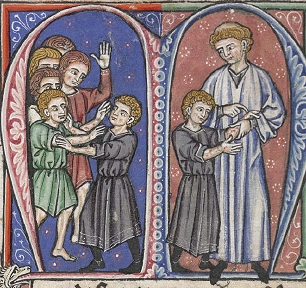 This demonstrates childhood of Baldwin IV. William of Tyre noticed Baldwin didn't feel pain and checked if he's got leprosy or not

Soon after, Saladin had reassembled a well-established army in Syria. In A.D. 1179, he destroyed Castle of Vadum Jacob built by Knights Templar in Golan Heights, and almost captured Baldwin IV in Marj Ayun. After such event, both sides had signed a long-term peace treaty, yet minor conflicts in the border still occurred some time.

Due to lack of capable troops, Baldwin IV sent his archbishops and sergeants of military orders to European countries; their task was asking for reinforcements and call for a new Crusade. But followed by European nobilities who came to Jerusalem for pilgrimages, a serious political crisis was arisen within the realm. The fundamental issue was the differentt ideology between European nobilities who just arrived and domestic nobility who already lived in the Holy Land for generations.

The local nobles, like Raymond III of Tripoli, Joscelin III of Edessa and Knights Hospitaller, claimed to remain peace with Saracens; however, newly arrived nobilities like Raynald of Châtillon and new grand master of Knights Templar Gérard de Ridefort; desired to wage a new campaign towards Saracens and seize more land to settle nobilities from Europe. 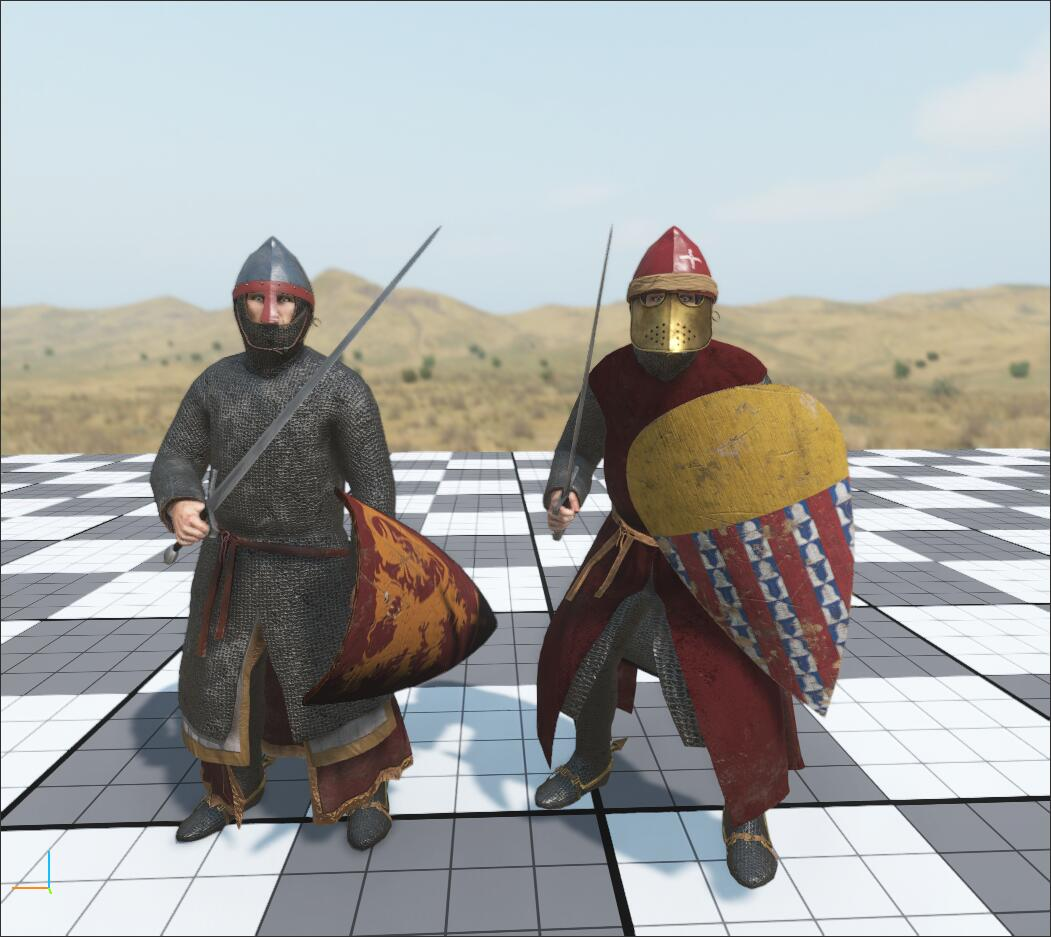 Raymond III of Tripoli (Left) and Raynald of Châtillon (Right) in INJ2, WIP

Raynald of Châtillon launched a raid along the coast of Red Sea in A.D. 1183 which severely threaten the scared land of Muslims on the Arabian Peninsula. That was the first time for Christian Franks to really menace the hinterland of Saracens. At that time, Saladin was busy on annexing the remnants of Zengid Dynasty in Northern Syria. Hearing the words about Raynald's raid, Saladin became so furious that he swore to kill Raynald with his own hand. Saladin quickly dispatched troops and besieged Castle Karak which was under Raynald's rule. Eventually, Baldwin IV organised a army to relieve the siege which ended the incident.

Baldwin IV knew his death was imminent, in the hope to secure a successor for the throne; he appointed his nephew Baldwin V, son of Sibylla of Jerusalem as his heir. The most powerful noble, Raymond III was given the title and authority of the regent. Meanwhile, Leonard suggested a political marriage between Sibylla and Guy of Lusignan; who was a newcomer from Europe, instead of Baldwin of Ibelin. It seems like everything goes well as he planned to be for a while. 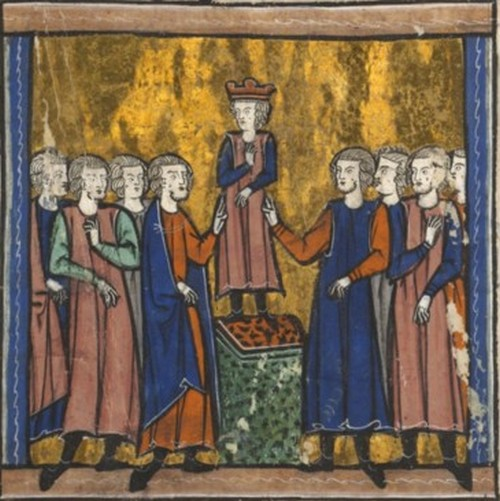 However, Baldwin V of Jerusalem died of illness in Acre within a year after the death of his uncle. The kingdom fell into turmoil again by the crisis of succession. Raymond III allied with Prince of Antioch, Earl of Edessa as well as other domestic aristocrats to support Humphrey IV of Toron as the new king. Humphrey IV is the son-in-law of Amalric I, namely the husband of Isabella of Jerusalem and the son of the former governor of the palace. Another faction which supported Sibylla and her husband Guy also involved in the event to claim the crown for themselves. Joscelin III seized Acre without hesitation while Raymond III and Bohemond III led an army from the north to Jerusalem; as they prepare to seize power by force at any time. 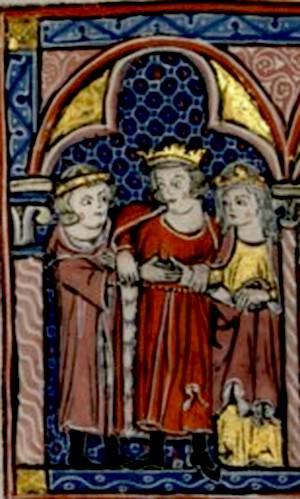 Marriage between Humphrey IV of Toron and Isabella of Jerusalem 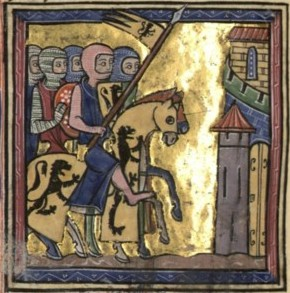 Sibylla agreed to divorce Guy and choose a new husband under political threat. But after uprise was over, the cunning queen immediately chose Guy as her husband again and put the crown on his head. Simultaneously, Humphrey IV gave up the claim of the throne and devoted to new rulers of the kingdom. Aristocrats in the realm were forced to accept such bizarre result. 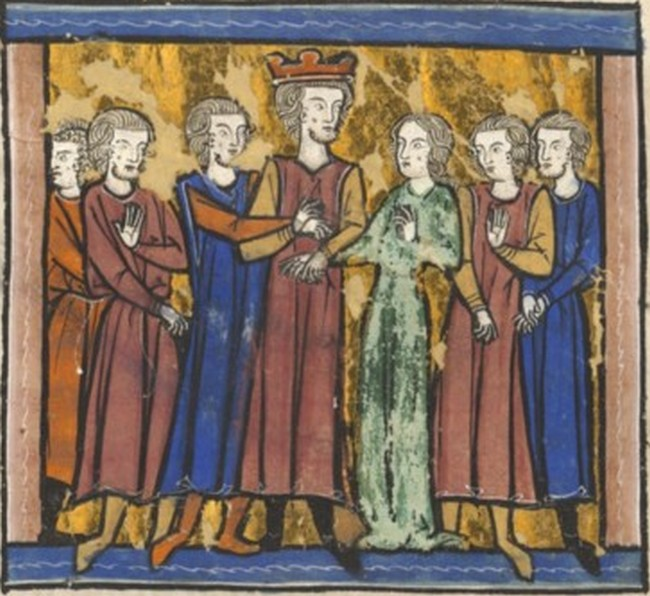 The wedding between Guy and Sibylla

After returning home, Raymond III decided he no longer supported the kingdom anymore and allowing Saracens to cross the Jordan River. Furthermore, Saladin has annexed all territories from Zengid Dynasty and united entire Al-Sham, the northern part of Fertile Crescent, Yemen and Egypt; which provides him with a mighty force of the coalition states. At the same time, Raynald's raiding of Muslim caravans gave Saladin an excellent excuse for invading the Kingdom of Jerusalem.

The storm of war has gathered. Who could decide the fate of the crumbling city named Jerusalem.

I think it was this one: Wappenwiki.org in 1187 and even before, i made research for a "project" in 1147, but i don't remenber my sources it was not a primary source like a manuscript but more some articles about text from the period. Still i'm not 100% sure, but more like 75%.

It's not that clear: En.wikipedia.org

I'll make some further researches it's quite interesting to know!

I remenber i had good info in this website Hubert-herald.nl

In this website on the County of Tripoli end page it is said "A banner with a crux quadrata was also displayed by Pons of Tripoli as can be seen on his seal. As Tripoli was a vassal of Jerusalem at his reign this cross probably was the cross of Jerusalem (Or, a square cross Argent)."

If there is no anterior known banner with strong evidence, hard to decide :-)

That was a good read. Gotta admire the level of historical accuracy presented here.