The website is up and running for Incertitude. There's also some updates on the final game that will be released soon.

The website for Incertitude is finally up and running! You can check it out at: Incertitudegame.co.cc 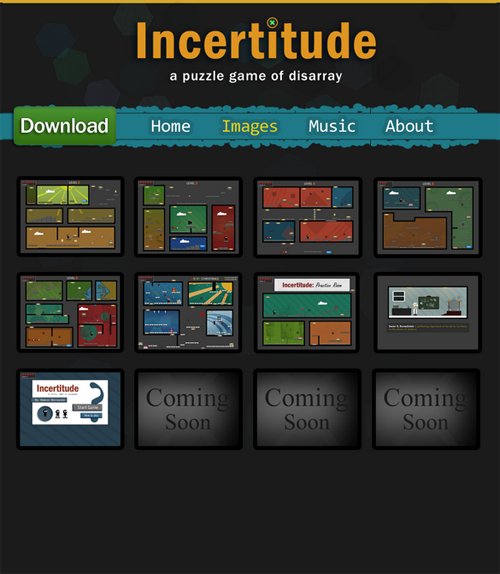 The website has a home page, an images page where you can check out pictures from every level and other cool things, a music page where I have some samples of music that are being featured in the game, an about page where you can learn about the developer of the game and about the game itself, and finally.. a download page to download anything I released for Incertitude.

In the final release of Incertitude, when you were playing a level and you lost all 5 of your lives, what used to happen was you would get pushed back one level and also lose 2 gems. (You collected gems for some aid in the levels later on in the game) I decided to change this. They way it works when you die now is:

I think having these two options rather than just getting jumped back to the last level is much better.

So besides what happens at death, I've made a few other changes like some of the levels' backgrounds, and I've fixed some bugs that happens in Gilbert's movements.. so when you run and jump around it seems to be more fluent now. I'm working on the last 2 levels now, so the final version of the game will be released soon!

I got 6mb internet but ur website is working REALLY SLOW.
Otherwise it looks good :)

thanks man, and yeah I know the website does seem to be loading everything really slowly. I was going to make a note that I'll probably be changing the webhoster soon. I'll probably change it later today if it doesn't start working any better.